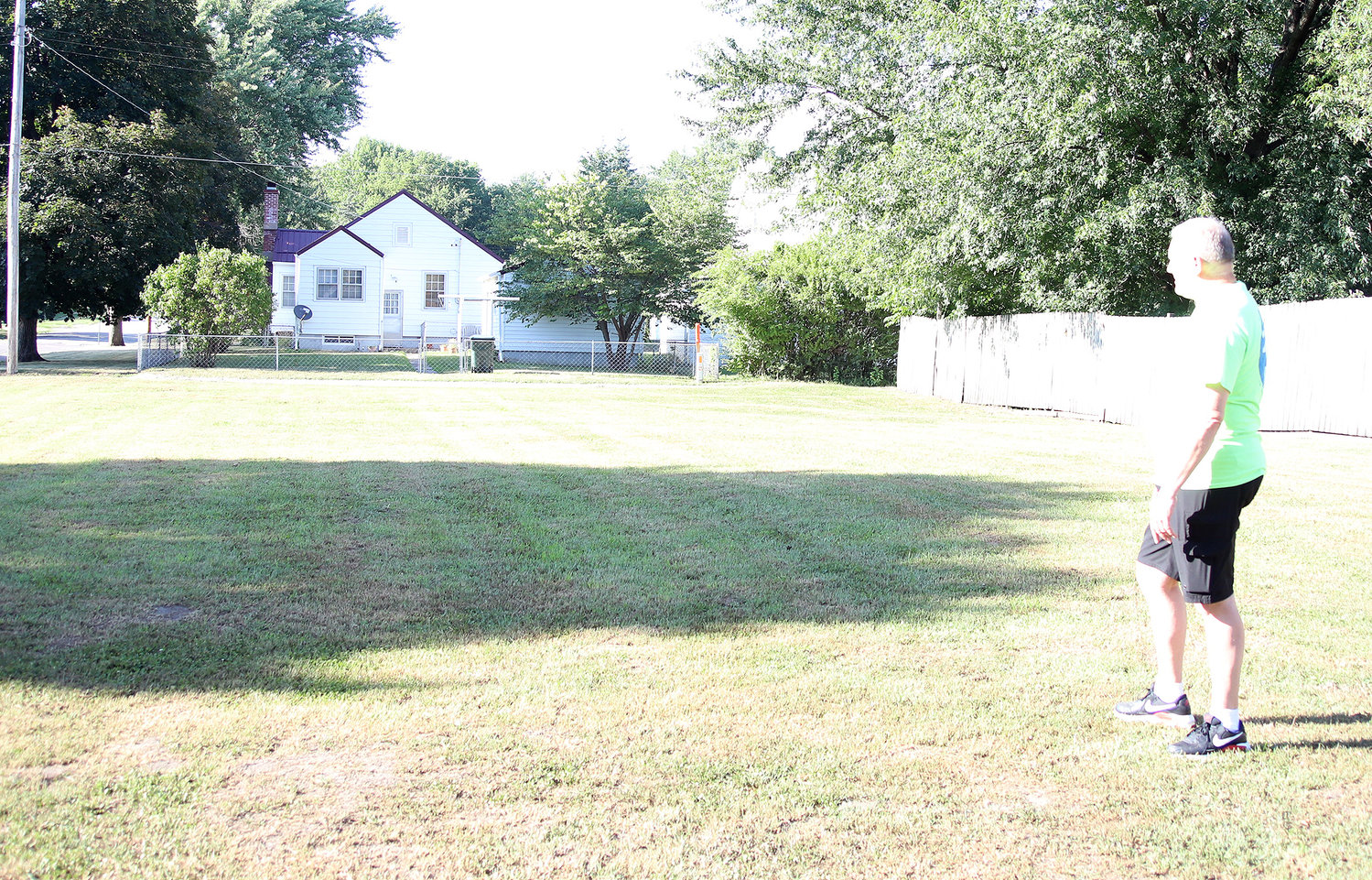 Lester Kistner, an organizer with 2x4s for Hope-Lee County looks out over the lot at 2833 Avenue J where two new Veterans' Tiny Homes will be built when funds are raised.
Photo by Chuck Vandenberg/PCC
Posted Wednesday, July 27, 2022 9:10 pm 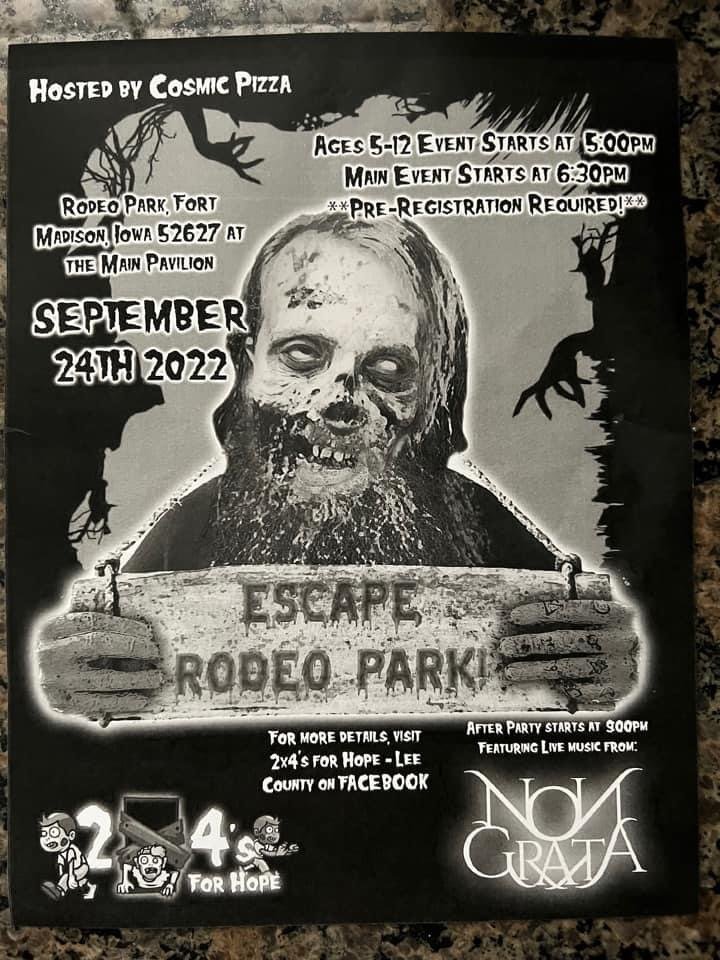 Our hope is to get enough monthly partners donating - say 1,000 people donating $10 a month, then there won't be any issue and we can build one or two houses per year.”
- Lester Kistner, 2x4s for Hope-Lee County organizer
Escape Rodeo Park

A 2x4s for Hope-Lee County fundraiser featuring zombie tag and an after party is set for Sept. 24 at Rodeo park starting at 5:30 p.m.

FORT MADISON - The lots are secured, plans are in place, and now the 2x4s for Hope-Lee County effort is in full-on fundraising mode.
The group met Tuesday night at the Fort Madison Eagles Club to update stakeholders and advocates on the progress being made when construction might begin.
Lester Kistner, a U.S. Army veteran and his sister Stephanie Warner are both veterans with active duty service and brought the program from Illinois to Iowa. Kistner's cousin started the program in Quincy.
He said the group is focusing on fundraising efforts right now to secure the needed funds for the first home. Right now the group has raised about $20,000 and need an additional $40,000 to get started on the first home.
"We're still in the active fundraising mode here," he said. "Due to the high prices of lumber and that, it takes about $60,000 to do a home right now."
He said that cost creates a turnkey home for an at-risk veteran.
"When they get the home it's a complete home. The wood, the concrete, utilities, furniture, appliances - it's everything," he said. "It's a complete turnkey operation. When the veteran gets the home it's completely furnished with everything they need, notebook paper, food in the cabinets, towels - everything."
The group established the first Iowa effort less than a year ago when they approached Fort Madison City Council for support. The city went a step further and found a lot for the first two homes at the northeast corner of 29th Street and Avenue J.
Kistner said the group will build two homes on the lot with driveways in the back off the alley. He said they try to limit construction to two to three homes for each lot, so there is no stigma to the neighborhoods. He said plans are in place for additional lots in the future, including a private donation that is currently is in the works.
But he said the group needs to generate funds for the construction. Kistner said donations can be made one-time or on a monthly basis. Donations can also be made through the group's signing events. They will have events at the Sweet Corn festival, at the Watermelon Festival, Mexican Fiesta, and at the Tri-State Rodeo.
Fort Madison Mayor Matt Mohrfeld said the hearts are in the right place on this project. He said the untapped resource, ironically, has been veterans.
"They put some veterans in the room to get some input and they were so excited about it," Mohrfeld said. "There were people from veterans' boards at the meeting and they started kicking around some really good ideas. It was a great bunch and it's pretty cool what's going on."
City Councilmen Jack Gray and Tom Schulz, both military veterans, were also in on the discussions Tuesday night.
"This is really an amazing thing to get in our little town," Schulz said. "I'm glad someone took an interest in Fort Madison as a location. I don't think people realize the number of combat veterans in Fort Madison that were in the desert. There's a lot."
The signing events include people being able to sign the 2x4s that are used in the foundation of the homes. The veterans who are getting the homes get to walk through during the first two days of construction to see the signatures and support of the community in their home.
Kistner said the efforts aren't just to get at-risk veterans in homes, but to get them all the support they need.
"When a veteran takes a home, they will get some paperwork that has numbers for veterans' support and resources. Some of them may not know where to go and some are too proud to ask for help. They need to know these services are here for them," Kistner said.
Construction takes eight days per home. Volunteer workers start on Saturday and by the following, Sunday organizers hand the keys over to the veterans. Kistner said typically there are about 100 volunteers working to build the homes over the eight days.
"We don't turn anyone away. It may look like chaos on the first weekend, but it's an organized chaos," she said. "We put skilled people in place and then put three or four volunteers with them so we have a bunch of little groups working together. It's pretty amazing within the first two hours the four exterior walls are built and up and by the end of Sunday night the whole exterior is done, shingled and sided and the electric is roughed in, it's insulated and drywalled."
The group is holding monthly meetings at the Eagles Club and the community is invited. Kistner said if the community isn't involved in the project, it won't work.
"Our hope is to get enough monthly partners donating - say 1,000 people donating $10 a month, then there won't be any issue and we can build one or two houses per year," he said.
A fundraiser has been set for September at Rodeo Park. The group is hosting an Escape Rodeo Park Zombie Run on Sept. 24 beginning at 5 p.m. for kids 5-12 and a main event for older people starting at 6:30. The event is framed around the game of tag with 10 safe zones sponsored by area businesses. As people get tagged by "zombies" they become infected and then are part of the zombie squad. Each participant has to try and get to all 10 safe zones. The last one remaining is the winner.
An after party starts at 9 p.m. with the band Non Grata performing in the pavillion at Rodeo Arena. The band is donating their services to the event.
For more information visit the group's  Facebook Page at  2x4s for Hope-Lee County at the following link: https://www.facebook.com/2x4sforhopeleecounty.