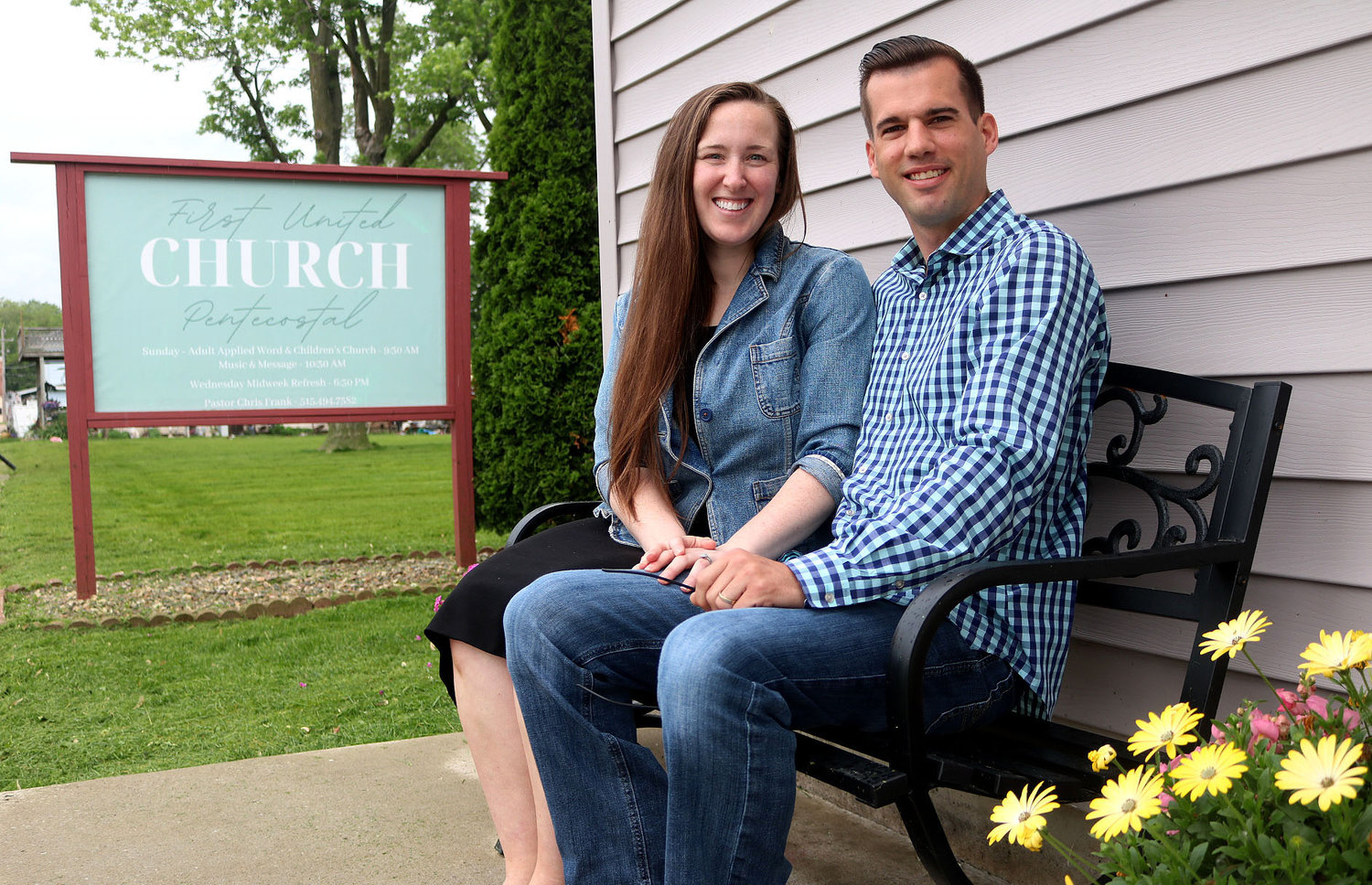 FORT MADISON - He was an atheist and a drug addict. She was an alcoholic.

After turning their lives around and finding a renewed relationship with God, Chris and Amanda Frank moved their family to Fort Madison from the burgeoning community of Ankeny, to lead a Pentecostal congregation in an inconspicuous church at 1224 26th Street.

Their intention is to make it much more conspicuous. With an energetic approach to attracting new members of all ages, the two are settling into a community they fell in love with in 2019. After driving through storms most weekends to attend the congregation from the center of Iowa, the two finally became residents in February after Chris was voted in as pastor in January of this year.

One of their first purchases was a sandwich board that they put at the corner of 26th and Avenue L, to remind residents of the First United Pentecostal Church.

Coming from a place where new growth and vitality is a daily source of news, to the bedroom community of Fort Madison isn't lost on the Franks. Chris serves as the congregation's new pastor following Don Culp who's been pastoring to the small congregation since the late 80s.

The building was erected in 1983 and has gone through a major interior renovation since the Franks moved into the area, after visiting first in 2019.

"I personally believe this is the best kept secret in town," Chris said.

"When we first came down to this community in August of 2019, I was ready to put my home on the market and move down, but I didn't want to do it out of emotion."

He said the church had written letters to the Pentecostal organization's headquarters in St. Louis looking for someone to lead with Culp's pending retirement.

"They had found nothing and I believe God was preserving this because we were supposed to be here," Chris said.

Amanda said the two started praying about the move and then a pastor friend let them know the bishop, Culp, was getting ready to retire and the timing was perfect.

The two went to work first putting together a nursery to encourage younger families to attend and have Sunday school.

"We represent the youth in our organization in this district of Iowa. There is all sorts of stuff that we do and we believe if you put positive things into children's minds when they are young and speak life into them, they have a better chance of staying focused and doing good things in life," Amanda said.

"We had people who believed in us and if hadn't been for them..."

The two both are recovered from addictions and speak that truth to members of the congregation, which can number anywhere from 20 to 35 depending on the week.

"About a month ago I was standing with a couple people and it was their first time in church. And I said to them the first time I was in church I had drugs in my pocket. I was a drug addict. And they were like, 'Can you say that in here" and I said "Yeah, because it's honest," Chris said.

Amanda said they welcome anyone who is looking for a conversation about God and his role in their life. Amanda is just 33 and Chris is 30, so being able to relate to younger families is part of the rebranding of the church underway.

They have also been working diligently on the physical aspect of pastoring as well as the social aspect.

The two have freshened up the church with new ceilings and lights, classrooms in the basement with a brand new kitchen and improved lighting. A keyboard and drum set sit on both sides of the podium in front of the pews.

The church also sits adjacent to several lots that have been donated to the church and Chris said they are currently getting an engineering survey done to see what the exact boundaries of the property are, to plan for additional improvements.

A shelter house on the property for outdoor services and picnics is in the works.

The couple have two daughters Jayden and Madison, 14 and 11, who are both enrolled in Fort Madison's public school system.