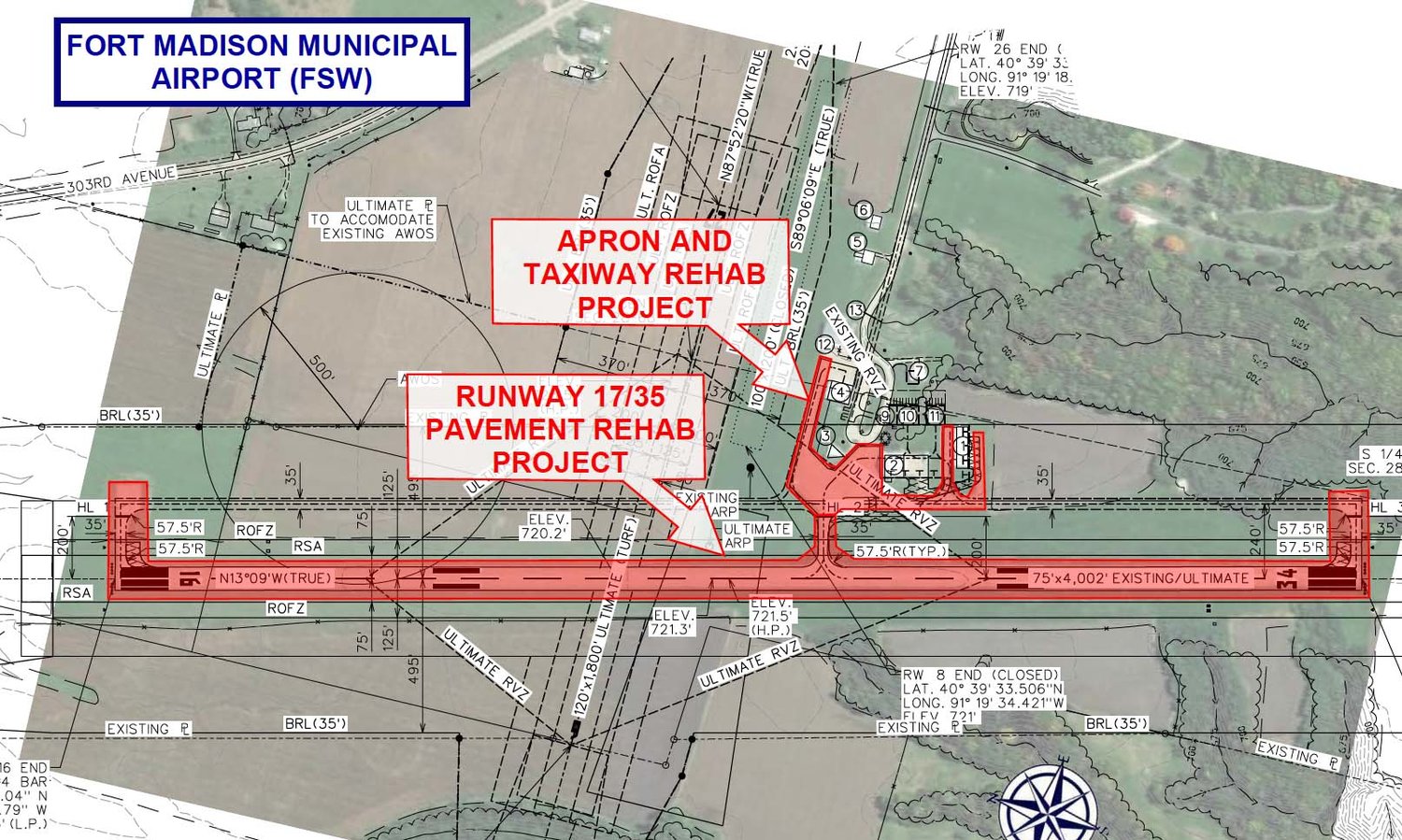 A rehabilitation of the Fort Madison Airport runway is on the commission 5-year plan. Image courtesy of City of Fort Madison
Posted Wednesday, December 22, 2021 9:31 pm

As part of the submission, the city had to show the airport had 10% in matching funds which, according to a report filed Tuesday, totaled $94,000.

The 2023 project would include replacing an outdated Automated Weather Observing System at the airport to include all new electrical and communications cabling in conduit, and a granular buffer around the system area in conjunction with the Iowa Department of Transportation. The cost of the project is $348,000 with the FAA tentatively picking up $313,200 of the project.

The current AWOS area is east of the north end of the runway.

A 2026 project would be to rehabilitate the airfield pavement at a cost of about $592,000 and would include cleaning and sealing of cracks and joints on the runway, taxiways, turnarounds, and aprons at Fort Madison Airport.

Additional projects beyond the 5-year plan include a four unit tee-hangar at a cost of $732,000, a wildlife hazard and environmental assessment for exclusion fencing and its construction, at a cost of close to $2 million.

Those two projects are tentatively planned for 2030 for the hangar, and 2034-36 for the wildlife study and fence construction.

"The airport is just doing an amazing job. They really are. They've got the Is dotted and Ts crossed to get the grants and for a small town they are doing just a great job," said councilman Tom Schulz.

City Manager David Varley said the report is a federal requirement for capital improvements at the airport and shows that the airport does have the funds for matching dollars.

"They want to make sure that these that are being done and we have the match, which the airport does," he said.

"They have a lot of different rules and regulations they have to follow and we have to file these reports."

In an unrelated issue, the city council unanimously approved change orders on the marina project for sediment approval and jetty work. The change orders changed the quantity of sediment removal with a reduction of $22,527, but adding additional material to the jetty wall. Adding to the jetty wall will add $31,559 for a net increase of about $9,000.

In other action, the council:
•approved, 6-0, a change order increasing Phase 3 of the PORT Trail project about $26,200 in final field adjustments bringing the new total contract amount for the work from 48th Street to Southeast Iowa Regional Medical Center - Fort Madison campus, to $363,393.
•waived the second reading and approved on third reading, by a 7-0 vote, to amend city voting wards per 2020 census data.