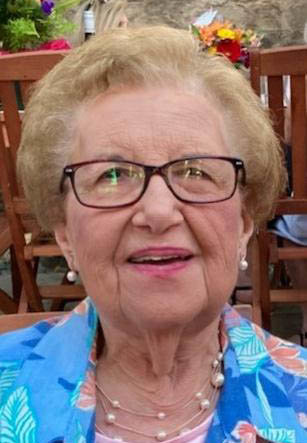 Shirlene Sparrow, 85, of Dallas City, Illinois, passed away at 7:54 a.m. Wednesday, September 8, 2021 at the Southeast Iowa Regional Hospice House.
Shirlene was born on April 26, 1936 in Denver, Illinois, the daughter of Draper and Ruth (Meyer) Reed. On June 1, 1958 she married Eldon Sparrow at the Denver Christian Church in Denver, Illinois.
Shirlene graduated from Quincy Business School. Following her graduation she worked for many years at the Marine Bank & Trust in Carthage and later for the Bank of Dallas City, retiring in 2003. She also worked for a short time at Fred’s Superette in Dallas City.
Shirlene was a member of the First Christian Church in Dallas City, Hancock County Homemakers, Eastern Star and a 49 year member of the Gideons International. She enjoyed cooking and gardening. She and her husband were active in numerous community events. She was fond of all children and many considered her their second grandma.
Survivors include her husband: Eldon; two sons: Brent (Kelly) Sparrow of Niota, Illinois and Jeff (Debbie) Sparrow of Lake Waccamaw, North Carolina; six grandchildren: Caleb, Hannah, Joshua, Ethan, Abigail and Sarah; seven great-grandchildren and one on the way, and one brother: Dan (Nancy) Reed of Macomb.
Shirlene was preceded in death by her parents and one great-grandchild: Asher James.
The funeral service for Mrs. Sparrow will be held at 2:30 p.m. Saturday, September 11, 2021 at the First Christian Church in Dallas City with Pastor Joshua Vance officiating. Burial will follow in the Harris Cemetery, near Dallas City.
Friends may call after 2:00 p.m. Friday, September 10that Banks & Beals Funeral Home in Dallas City where the family will receive friends from 4:00 until 8:00 p.m.
A memorial fund has been established for the First Christian Church, The Gideons International or Southeast Iowa Regional Hospice House. To leave a condolence for the family, please visit Shirlene’s obituary at banksandbeals.com.