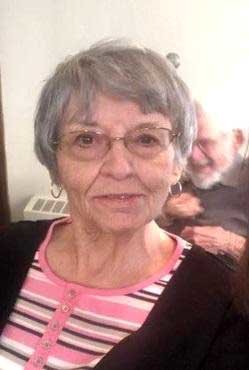 Yvonne L. “Voni” Kaminski, age 78, of Dallas City passed away at 6:06 pm Tuesday, August 24, 2021 at McDonough County Hospital in Macomb, IL after a valiant battle with Non-Alcoholic SteatoHepatitis (NASH). She was reluctantly passed from the arms of the adoring family she created to those of her loving Savior.

Yvonne was born an actual coal miner’s daughter on November 19, 1942 in Emporium, PA to Harry E. and Annie (Smith) Gontero.  She was a 1961 graduate of Burlington High School. She married Gary Kaminski March 17, 1963 in Burlington, IA.  She worked as a bookkeeper and secretary in the early years of her marriage, but her true calling was as a wife, mother, and grandmother.

When her daughter became paralyzed in a diving accident, she became a fearless advocate and tireless encourager.  She spent countless hours driving to rehabilitation centers, to SCI research trials, to colleges and law school.  She became an enthusiastic genealogy assistant and treasure hunting partner.  She made it her mission to open every door she could to her forever grateful daughter.

Yvonne loved being a grandma.  She was a founding member of the large entourage that accompanied her grandchildren to piano recitals, class plays, T-ball games, talent shows, art displays, lemonade stands, etc.  She loved to hear every detail of their lives and discussed at great length their every daydream.

Yvonne had a natural curiosity her entire life and firmly believed, “every man I meet is my superior in some way, and in that I learn from him.” Because of this, she loved meeting new people and learning new things. She was interested in the lives of everyone she met and never knew a stranger.  She maintained decades long friendships while continuing to make new ones.  She spent hours on the phone with her brother, sister, and friends.  She was generous to a fault in both time and money. She was a member of the First Christian Church in Dallas City.

She is survived by her husband of 58 years; one son Jamie Kaminski (and wife Tami); one daughter Kristin Kaminski; three grandchildren Kayla Hutson (and husband Ross); Katie Kaminski; and Cooper Kaminski, all of Dallas City; one devoted brother Lynn Gontero (and wife Cylda) of Iowa City; three nieces; two nephews; many great nieces, nephews, and great great nieces and nephews.

She was preceded in death by her parents; one beloved sister and brother-in-law Shirley and Carl Burger; and one brother Teddy Gontero.

Services will be held at 2:00pm Saturday, August 28, 2021 at the First Christian Church in Dallas City. Burial will follow in the Harris Cemetery near Dallas City. Friends may call after 2:00pm Friday at Banks & Beals Funeral Home in Dallas city where the family will meet with friends from 5:00 until 7:00p.m. A memorial fund has been established for the Sunbeam Corner in Dallas City or a charity of the donor's choice.