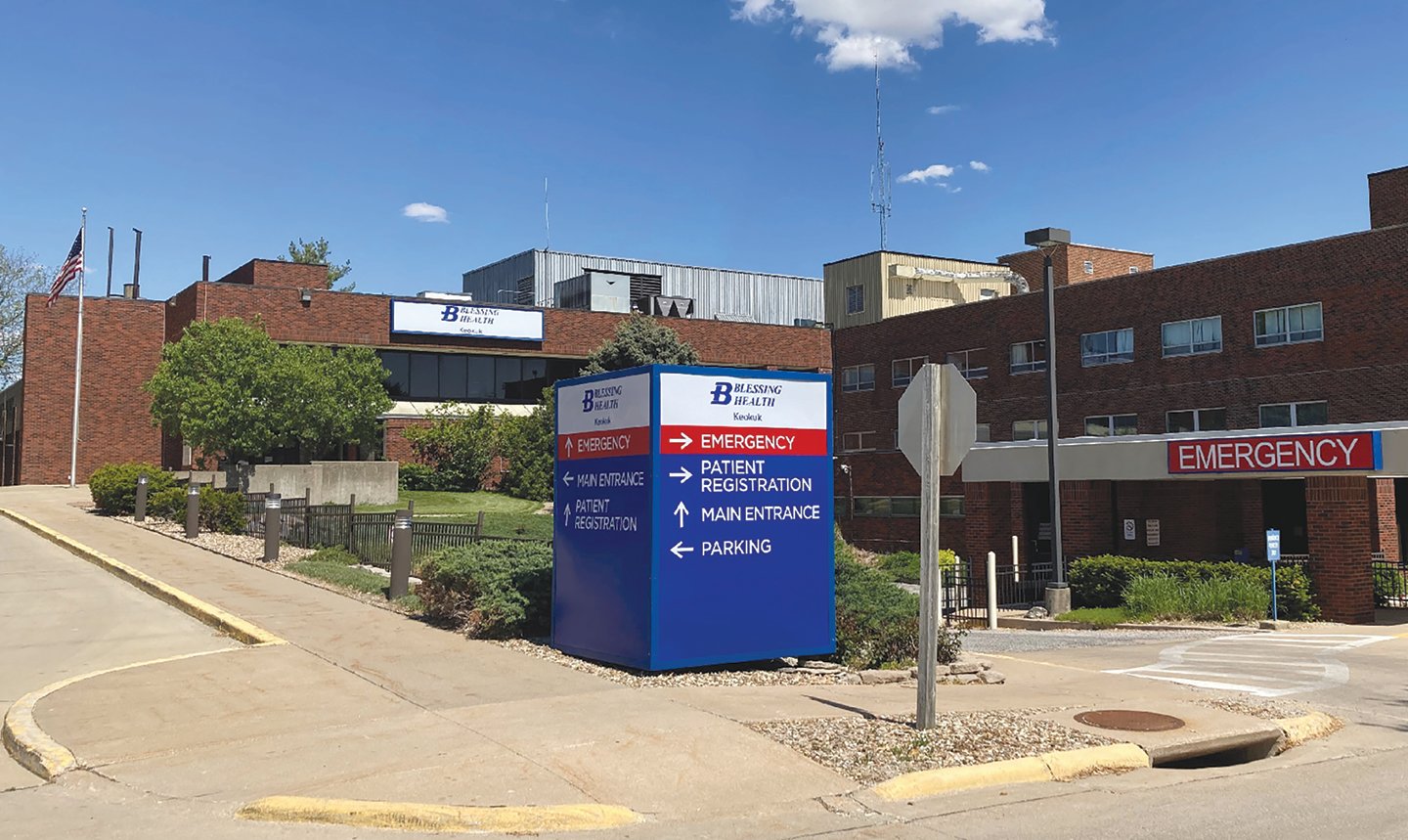 Blessing Health Keokuk announced it will close the hospital and Emergency Department by Oct. 1 at the latest in a stunning announcement Thursday morning
image courtesy of Blessing Health
Posted Thursday, September 1, 2022 3:25 pm
Impact to Ambulance service

We have thought of that, but we have not pursued it at this point in time. We have notified them of the closure and we do understand it will be a hardship for them. They are already hard-pressed for staffing.”
Kathy Hull, Chief of Small Rural Hospitals for Blessing Health

It's going to impact the ambulance service in a major way and I just can't tell you all those ways yet. We're still in the process of figuring out what we're going to need to do.”
Dennis Cosby, Lee County Ambulance Director
Hospital was losing $750,000 a month

Kathy Hull, chief of Blessing Health's rural hospitals said operations were losing $750,000 a month and repairs on the building were closing in on the $20 million range.

KEOKUK - Blessing  Health in Keokuk informed employees and the community Thursday morning that the facility will not remain open past Oct. 1 in any capacity.

According to a statement from Steve Felde, External and Internal Communications Director the decision was made based on consistent low demand for inpatient and emergency room care.

"The hospital has been in financial crisis for 10 years. During that time, residents of the region have developed new habits and patterns for where they receive their inpatient health care, leading the hospital to average fewer than two inpatients per day and less than one emergency room visit per hour," the release indicated.

Blessing leaders say the level of inpatient and emergency care demand does not support the investment required to operate a hospital of 49-beds and an emergency room around the clock, seven days a week.

A recent architectural survey by a private company also revealed recently the hospital building required renovation and replacement of nfrastructure that could reach into the $20 million range.

"Based on current and expected patient use of hospital-based services in Keokuk, Blessing leaders say an investment that could total millions of dollars cannot be made responsibly," the release stated.

Blessing Health took over operations of the Keokuk facility in March of 2021.

“We did not want this to happen. This was not our plan,” said Kathy Hull, chief of small rural hospitals for Blessing Health.

“We are disappointed but undaunted. When we reestablished our presence in Keokuk last year, we said Blessing was committed to investing in Keokuk’s health care infrastructure to revitalize the community and the region to benefit everyone. Blessing has made an investment in the community and will continue to do so through outpatient care.”

Hull said Blessing officials have been working with state and federal legislators and regulators looking for a last-minute option to save the hospital, but unfortunately found nothing.

"We've made several attempts to find a viable option with regulators and legislators even looking at the possibility of becoming a Criticial Access Hospital, which has a different payment modality for a small rural hospital," Hull said.

"We've also attempted to look at Rural Emergency Hospital legislation passed last year at the federal level and tried to speak with legislators about that coming to life in Iowa and it was tabled by them.

"That would include an ER with a few observation rooms. We had hoped that might be an option for us, but that did not go forward."

Hull said legislators told her even if Iowa did put that legislation back up it would be next fall before it would hit the books and that's just too far away for the Blessing to stay operational.

Hull said Blessing reached out to State Sen. Jeff Reichman and State Rep. Martin Graber about the upcoming announcement and didn't get a response until Thursday.

"We've also been in contact with the Governor's office on several occassions in an attempt to find anyway we could not do this. We just unfortunately didn't come up with anything," Hull said.

She said Blessing would be open to conversations with Lee County around it's ambulance service and how they could help with the increased demand that's on the horizon.

"We have thought of that, but we have not pursued it at this point in time. We have notified them of the closure and we do understand it will be a hardship for them. They are already hardpressed for staffing.," she said, adding that Blessing would initiate conversations with Lee County EMS immediately.

Hull also said no one has come forward to talk about taking over the operations.

"There have been many failed partnerships before and getting another partner to come at this point would be incredibly difficult," she said.

The hospital property will be put up for sale, according to Blessing officials.

Effective with the closure of the facility, residents requiring emergency care will have to call 911 for Lee County EMS services and transportation.

Dennis Cosby, the director of the Lee County EMS said he still hasn't fully got his head around the news.

"It's going to impact the ambulance service in a major way and I just can't  tell you all those ways yet., Cosby said. "We're still in the process of figuring out what were going to need to do."

Cosby said when the county was notified of the closure, they were informed that the hospital may not even remain open til Oct. 1 if they can't staff the facility. He said the county is currently trying to determine what they'll need to do to facilitate transports to the closest hospitals.

"We generally try to follow people's wishes but a lot has to do with the patient's condition, and insurance usually pays to closest facility. Carthage would actually be closest."

That determination would end up costing the county even more due to the distance back into the county from Carthage, where as a transport to Southeast Iowa Regional Medical Center in Fort Madison would have less cost in restaging the ambulance.

"We'll have to put on a second truck in Keokuk. Not only will it increase costs, but we' won't have a place to put it," he said.

Blessing was also one of Lee County EMS pharmacy replenishment facilities and Cosby said now that will have to change as well.

"This will be a huge change to our operation and we're going to have to immediately add staff. I'm going to need a couple days for sure to get my head wrapped around it," Cosby said.

Lee County Supervisor Garry Seyb, who sits on the Lee County EMS Advisory Board, said this is a huge challenge now for the county.

"This is definitely going to drive dicussion for the ambulance. It almost surely will require expansion of the number of ambulances on any given shift. The only hospital left in the county for emergency is Fort Madison. This will result in more travel time on the road which keeps them out longer.," he said.

“This decision is not only a blow to Keokuk, but to rural communities everywhere.  Residents will either have to travel for care or wait for local urgent care facilities to open.  Even then, quality in patient care will only come from facilities 20-60 minutes away.  This also is a loss of quality jobs that will significantly impact families and the community," she said.

In response to the announcement, Mahoney said Keokuk officials have reached out to other providers to begin discussions on ways to provide 24-hour care in Keokuk.  Additionally, officials will be reaching out to state and federal officials to determine what assistance is available or what legislation is necessary to assist rural communities in maintaining quality health care for their citizens.

Since it reopened in May 2021, Blessing Health Keokuk Clinic has expanded services with the addition of primary care, occupational medicine and other specialty services including orthopedics. These services will continue – as well as the Blessing Be Well at Work program used by area employers -  and Hull says more services could be added at the clinic if demand for outpatient care continues to grow.

Blessing Health Keokuk’s 147 employees will be retained until November 4 in a combination of either on-site work or on administrative leave and those interested and qualified to transfer within the system will be given assistance as well in the coming weeks.

Patients of Blessing Health Keokuk who need their medical records transferred can go to blessinghealth.org/medicalrecords, or call 217-223-8400, ext. 6600.