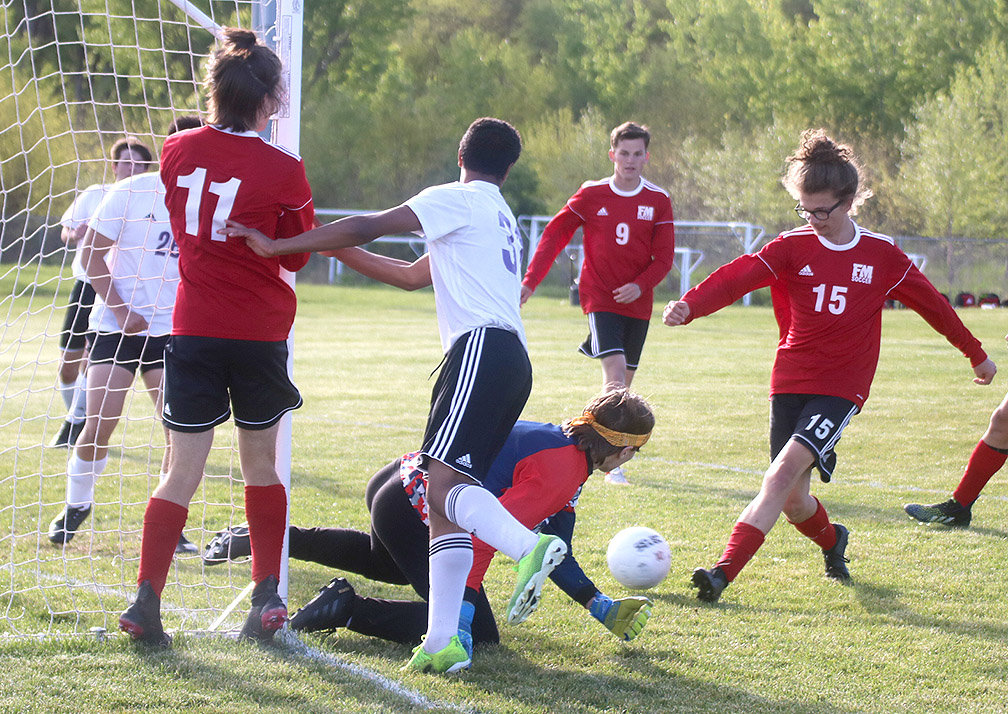 Renzo Eid (15) slides the ball past Burlington's keeper early in the second half off a pass from Xander Wellman (11). The Hounds downed Burlington 8-0 at home Tuesday night. Photo by Chuck Vandenberg/PCC
Posted Tuesday, May 11, 2021 9:53 pm

FORT MADISON - It’s the things you don’t see, Fort Madison soccer coach Kevin Wellman said, that makes the Bloodhounds special.
Take, for example, the Bloodhounds’ trip on Saturday for their match at Iowa City Liberty.
“They were playing some ‘80s music, and it was a sing-along on the bus,” Wellman said. “I turned around to look and there were probably 12 kids singing along to a couple of songs. They were having a great time. Really high spirits.”

The mix of players from Fort Madison and Holy Trinity is working.
“They want to be together,” Wellman said. “They’re hanging out together on weekends. They want to be together.
“It’s just great to be a part of.”
The Bloodhounds finished an undefeated run through the Southeast Conference on Tuesday night, defeating Burlington 8-0 at the Baxter Sports Complex.
Fort Madison, ranked 12th in Class 2A by the Iowa High School Soccer Coaches Association, went 10-0 in conference play. The Bloodhounds, 13-1 overall, haven’t lost since the season-opening overtime loss to Notre Dame.
“It’s a huge deal,” Wellman said of the run through the conference. “Huge deal. It was one of our team goals when we set out on the season. And we accomplished it. It’s always awesome to accomplish your goals.
“Sometimes you get complacent against a team you’ve (already defeated). We didn’t do that. We made sure we took care of business.”
The progress, Wellman said, could be seen in the difference between the two matches against the Grayhounds. Fort Madison had a 5-1 win at Burlington on April 22, but this match wasn’t nearly as competitive.
“Our timing between our midfielders and forwards is a lot better,” Wellman said. “The last time we played them, we were offsides several times. And I think that was a product of it being not at the right timing. We fixed that. And I think that’s part of the reason we had a better attack.”

Fort Madison dominated this match, scoring five goals in the first half.
Jacob Pothitakis had three goals, two in the first half. Mitchell Pothitakis scored twice, and Will Larson and Renzo Eid each scored once.
Burlington rarely challenged against Fort Madison’s defense. The Grayhounds (4-9 overall, 4-6 conference) played the final 2:16 down a player after Kristoffer Hollerauer was sent off after his second yellow card.
Fort Madison closes the regular season on Monday at Mediapolis.