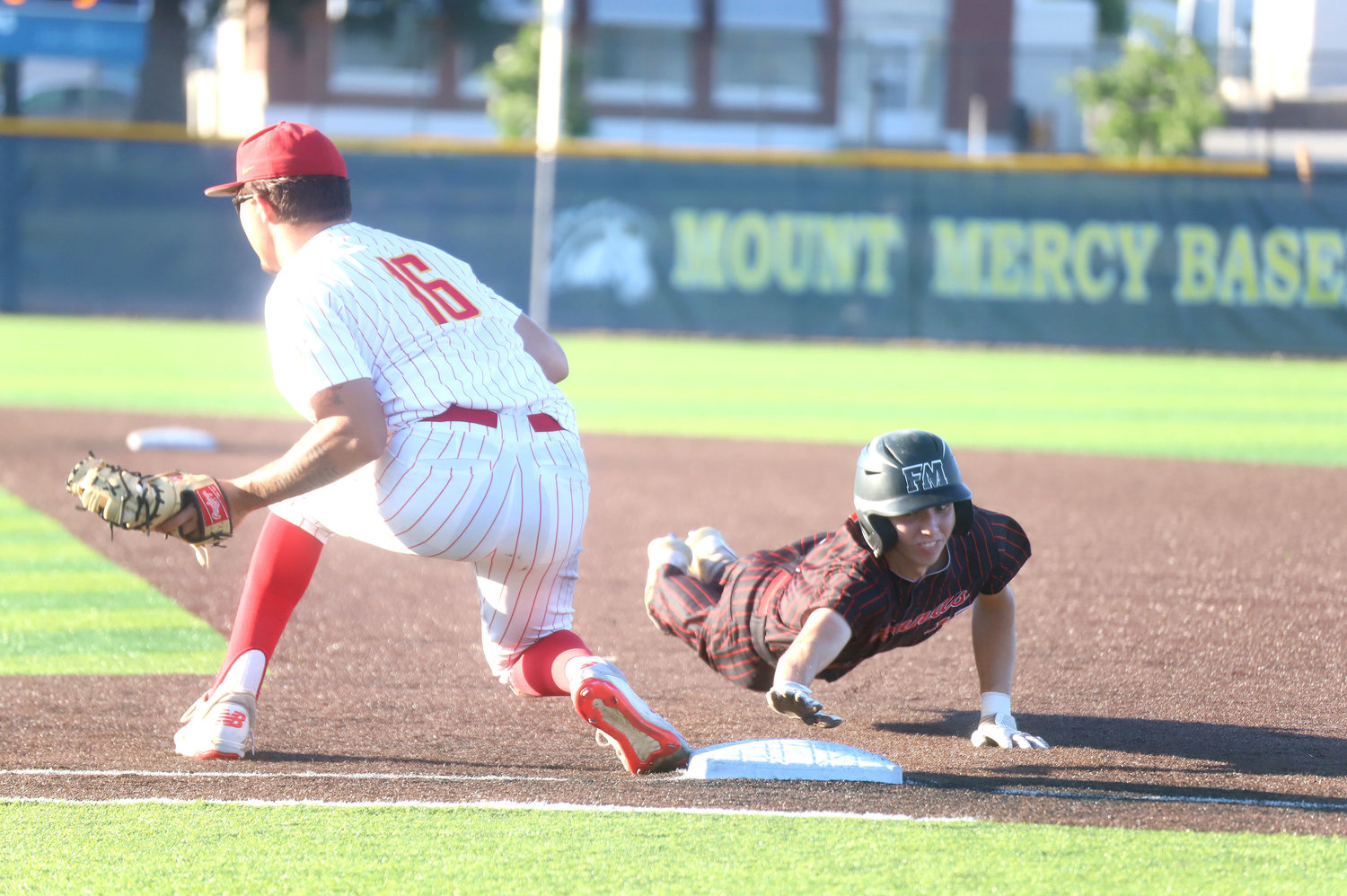 Fort Madison's Matt Hopper dives back into first base in the first inning of the Bloodhounds' 12-2 loss to Marion at the Substate 5 semifinal at Mt. Mercy University in Cedar Rapids Monday night
Photo by Chuck Vandenberg/PCC
Posted Monday, July 11, 2022 11:29 pm 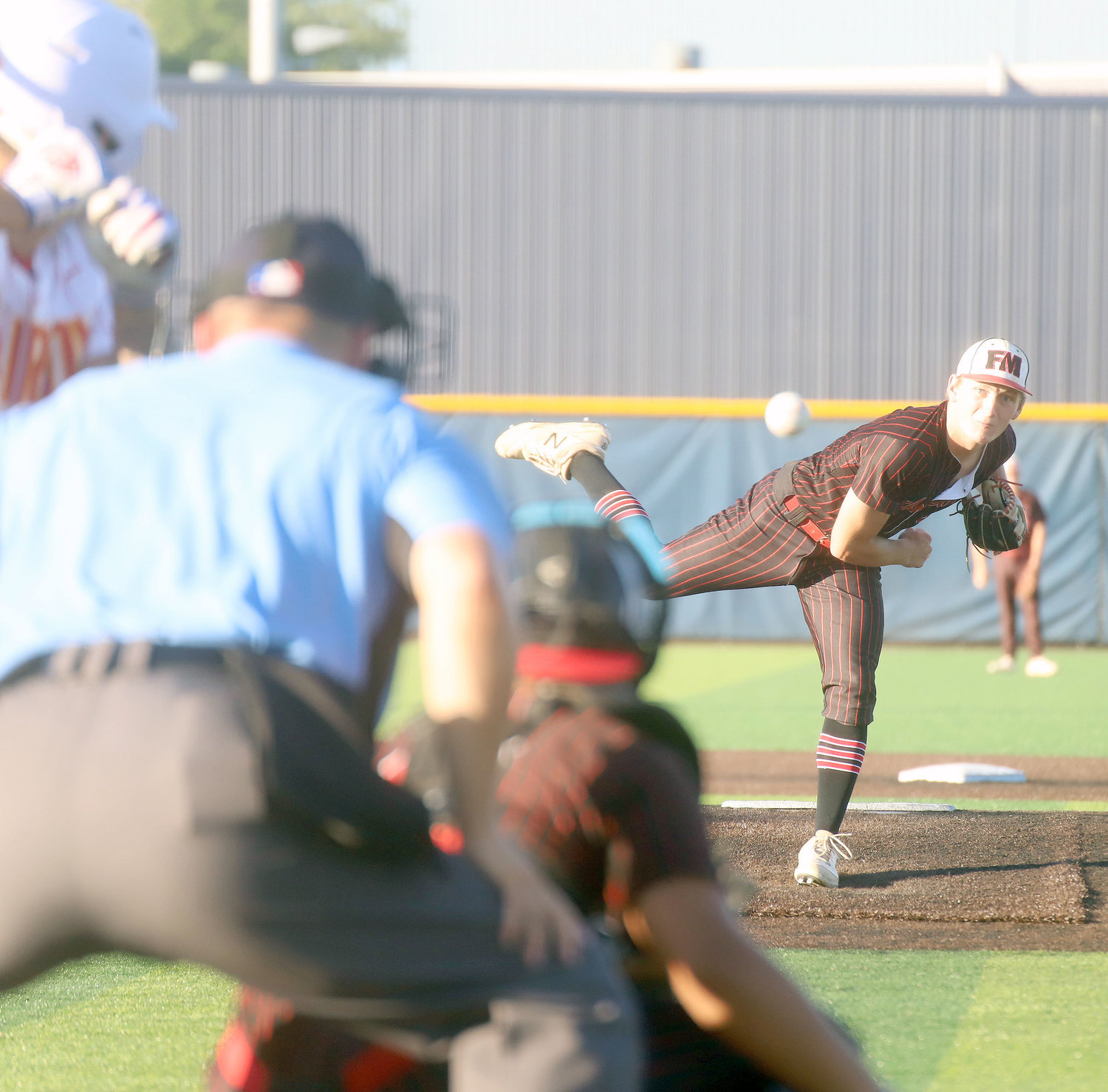 These are four kids that are all going on to play sports at the next level. They will be tough to replace, but I think it says a lot about the programming here at Fort Madison  that these kids are seeing that kind of success.”
- Ron Walker, FMHS Head Coach
Chuck Vandenberg, Pen City Current Editor

CEDAR RAPIDS - Fort Madison needs a few more games on turf fields before they come to Cedar Rapids again, at least to Mt. Mercy University, where five errors put the Bloodhounds in a big hole.
The Hounds lost 12-2 in the Class 3A Substate 5 semifinal game in Cedar Rapids at Mt. Mercy's new all-turf field.
The errors weren't the only downfall of the Hounds, but with Matt Hopper diving for grounders behind in the infield on multiple occasions, it was clear early that the playing conditions were not what Fort Madison was used to.
Head Coach Ron Walker said that's one of the downsides of playing in rural Iowa, you don't get to see those types of environments, and you typically don't play that kind of  competition.
"The kids were timid on this field, even in the warm ups. You could see it. We don't have access to these types of fields and we didn't see them at all this year, so that's a part of it," Walker said.
"But I talked to the kids out here afterwards and asked what's the one thing I preach to them and they said, to play hard and commit. So why are we playing scared?"
The Hounds' Reiburn Turnbull led the offense going 2-3 with an RBI. Fort Madison only had four other hits on the night, one each from Tate Johnson, Landes Williams, Kane Williams, and Tanner Settles who just beat out a bunt in Fort Madison's 2-run second inning. Settles also had an RBI infield single in that inning.
Marion jumped out to a quick 2-0 lead when Fort Madison committed their first two errors in the bottom of the first. A sacrifice bunt attempt turned ugly when Marion's Cael Hodges came all the way around to score on a couple throwing errors in the infield. Myles Davis would then double in another run for a 2-0 lead heading to the second.
Hopper would get dinged on a pitch but that would be the only base runner for the Hounds in the second.
Landes Williams, who went all five innings for the Hounds, gave up a two-out single to Hodges in the bottom half, but kept the Wolves in check the rest of the inning.
Williams would hit a one-out single that started a three-hit rally for Fort Madison. Kane Williams followed with a single and Turnbull lined a grounder into center field to score Landes Williams and move Kane Williams to third.
After a strikeout for the second out, Tanner Settles beat out one of the night's slower infield grounders to short stop scoring Williams and moving Turnbull to third. Hopper would strike out swinging to end the threat with the game tied 2-2.
Marion would add three in the bottom of the third while the Hounds stranded two in the top of the fourth.
Marion broke things open in the bottom of the fourth with seven more runs, six of which came with no outs. At 12-2, the Hounds sat three down in a row to get out of the inning.
Tate Johnson singled with one out  in the fifth inning and Hopper drew a walk, but a fly out and strike out ended the Hounds' season.
Walker said it will be tough to replace four seniors. He will lose Johnson, Landes Williams, Hopper, and Turnbull.
"These are four kids that are all going on to play sports at the next level. They will be tough to replace, but I think it says a lot about the programming here at Fort Madison  that these kids are seeing that kind of success," he said.
Turnbull said the field was definitely different.
"This was much faster than we are used to. Tate even said when he slid at second he went flying over the bag," Turnbull said.
"I think we did okay, some of us just were a bit intimidated I think, but that first pitch coming in was a heck of a lot faster than it looked in warmups."
The line on Williams was five innings, 12 runs, eight earned on 11 hits with one strike out and three walks.
Fort Madison ends the year at 19-9 overall.
Walker said Fort Madison has to play better than .650 or .700 baseball to get a higher seed going into the post-season.
"We have to maintain a better record so we get a higher seed and can control our destiny a bit more in the future," he said.