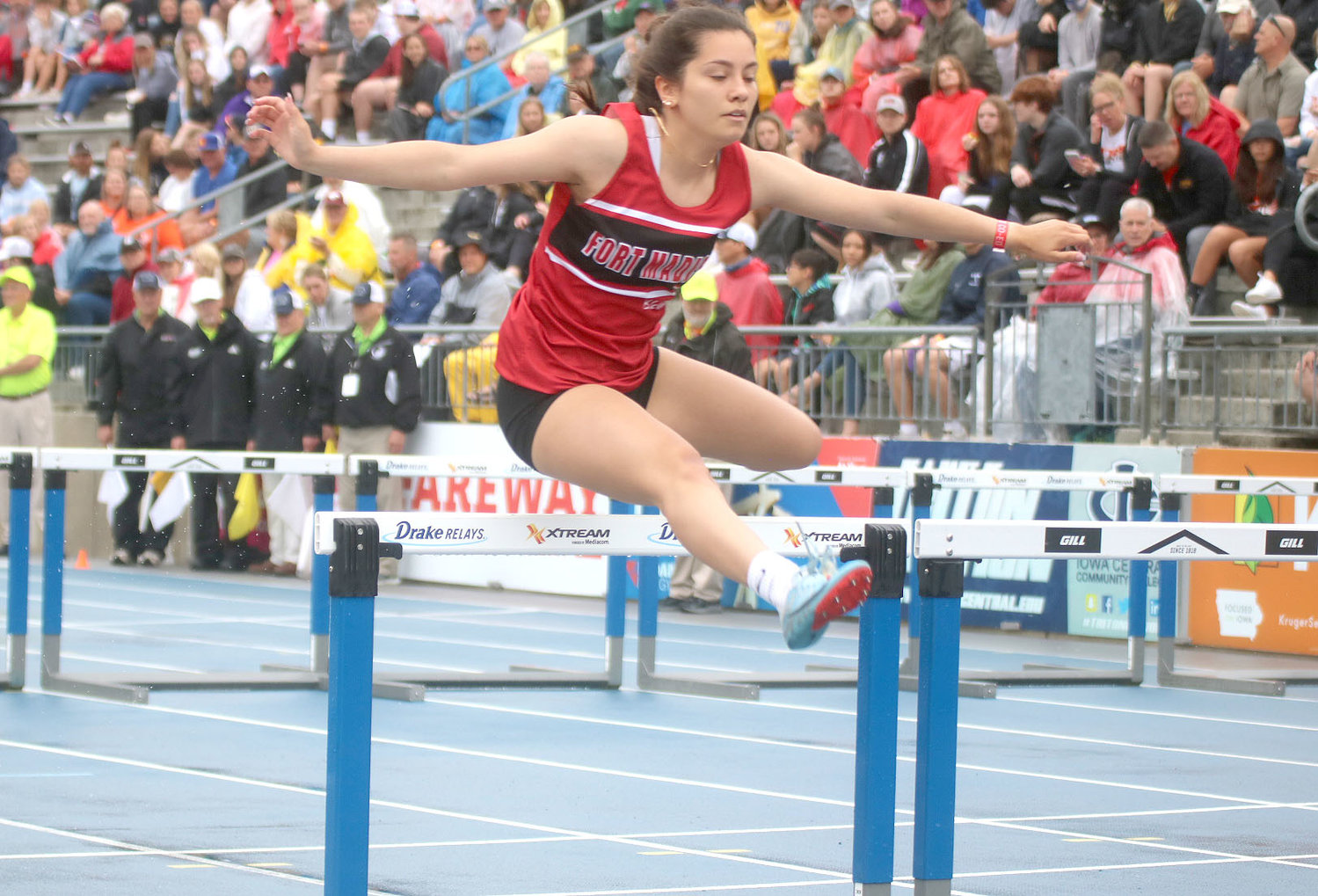 DES MOINES - The blue oval of Drake Stadium, a track that sees some of the world's fastest runners and times, was unkind to state qualifiers from Fort Madison and Central Lee Thursday.

The day on the track started with Fort Madison's girls shuttle hurdle relay team. Members of the team were three of the four that qualified for state in 2019. The state meet was canceled in 2020 due to the COVID pandemic.

Senior Reyna Lampe ran the first leg of the event with Taylor Barnes picking up the second leg. Freshman Aija Jenkins ran the third and Raquel Schneider ran the anchor. The Hounds qualified with a time of 1:11.43 last week at districts in Mt. Pleasant.

But the foursome lost about a second and a half off their district pace finishing with a 1:13.08 failing to make the finals on Saturday.

"I was kind of scared and felt like I was jumping over them really high at first, but I was able to reach the first hurdle along with the girl next to me," Lampe said.

Jenkins said the water got in her head early, as a cool mist fell on the event for most of the early session.

"I was scared at first because it was wet and looked slick, and then I kind of stutter-stepped at the first hurdle, but I did okay, I guess," she said.

"I was scared because of the water thinking I would slip, and when I got to the second hurdle and realized the water wasn't going to effect me, I got back into the race," Schneider said.

Lampe said missing last year hurt them a little, but said everyone went through the same thing.

'I'm not trying to use it as an excuse, but it would have helped to have that extra year to work," she said.

Central Lee sophomore Tommy Eschman was busy jumping in the sand at the 2A long jump. Seeded 24th, Eschman got the first leap of the day and set a good mark with a 20-0.75". The 2A field could be the strongest at the meet with Cooper Dejean clearing 23 7.5".

Eschman, who said he doesn't like jumping off the wood board vs the painted lines, said that got into his head as did the misty weather. Eschman jumped 18-8.75" on his second jump and then would have surpasses 20-5" on his third jump but got a red flag for faulting. He finished 16th after being seeded 24th, an improvement of eight spots.

"I definitely would have done better had it been good weather, but I don't want to pin it all on that. It was little bit of nerves and that kind of thing," Eschman said.

The sophomore is jumping for the first time ever and said he wants to continue to work on the event.

"I'm definitely going to work on this over the summer. If I'm going to go anywhere it will be in this," Eschman said.

Central Lee's Chance Hocker ran in the 200-meter dash coming seeded lowest in the field at 24, and put up a 23.82 which was good for 22nd surpassing two in the field.

"I had confidence coming into the run that I could compete, but these guys are pretty fast. I'm just glad I made it up here to be able to do this," he said.

Johnson said the track felt different, but it doesn't matter to him what surface he runs on.

"It's not really like the rock tracks were used to running on. It's more spongy than I'm used to but it doesn't really matter to me. I'm just happy I made it here."

Johnson ran in the 100-meter dash about two hours later and marked at 11.69, .30 seconds slower than his district qualifying pace and .29 seconds out of Saturday's final.

"This is different, totally different feel," Davis said. "The environment here is different and the competition is way different. I felt pretty confident going in, but when I started running it all started hitting me."

Back on the girls side of things, Jenkins, who qualified in the high jump as well, cleared the first two bars at 4-8" and 4-10" just missed clearing the 5-0" mark on her second try and failed to advance missing on her other two attempts as well. She tied for 19th in the event.

On Friday, the Hounds' Jakob McGowan and Mikey DiPrima will start the day with the long jump. Then the 4x200 team of Brock Califf, McGowan, Andrew Shaefer, and Garrett Hannum will try and place in that relay. Schneider and Central Lee's Abby Wellman will go to work in the 400 hurdles at about 11:30, and the Hounds 4x400 relay team will wrap up the day with at around 2:15 p.m.

If the 4x400 team finishes top 8, they will run again in the finals of that event on Saturday in the last event of the meet. All the other events for Fort Madison and Central Lee will be finals on Friday.