Central Lee flirts with upset of No. 3 New London 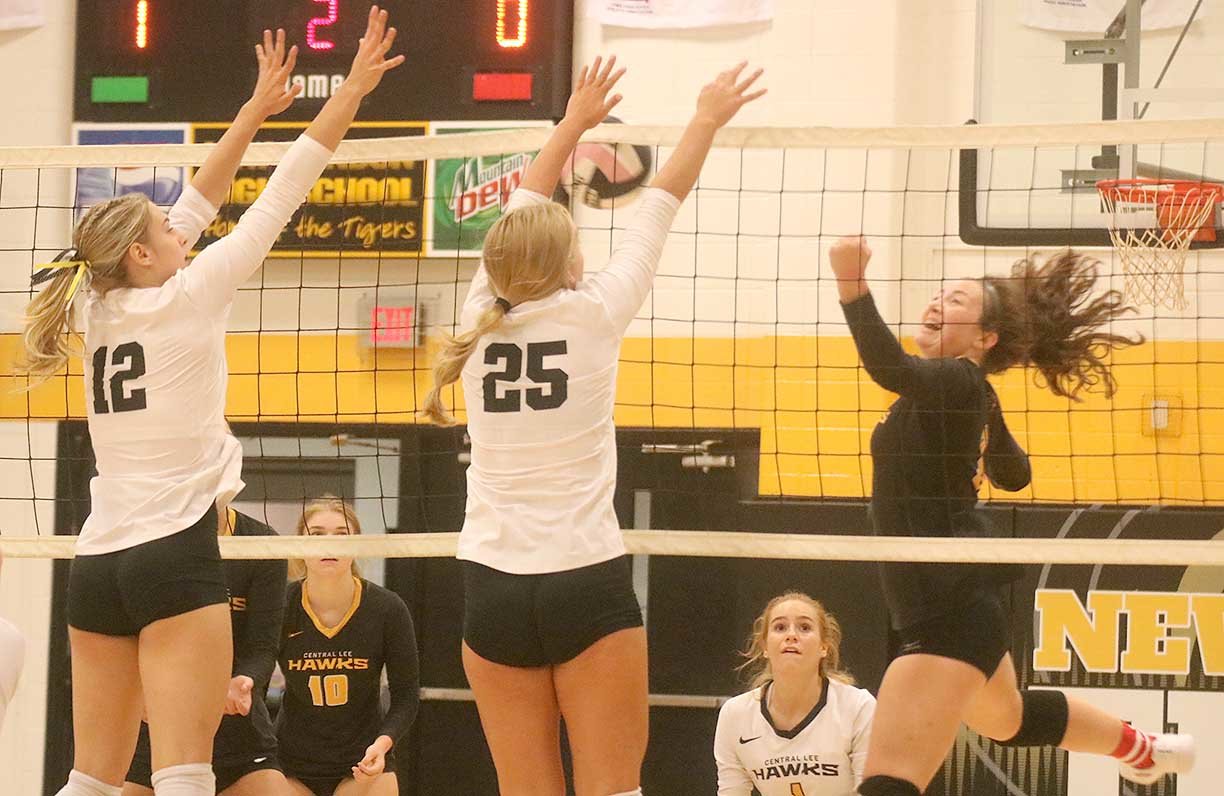 NEW LONDON - In a see-saw affair at New London High School Thursday night, the Class 1A No. 3 Tigers held off some pesky Central Lee girls to take three out of four sets to open Southeast Iowa Superconference South volleyball action.

Head Coach Amy Cook said the opening challenge with one the top teams in the area is good for the Hawks.

"Our conference in general is a tough conference. It's only going to make us better. You spend all this time practicing before the season - we know where weaknesses are and they practice those. They're only going to get better and we'll come to practice tomorrow and work on those things," Cook said.

The Hawks trailed 4 to 7 in the first game but Maura Watkins reeled off six straight points including back-to-back aces to cut the Tigers' lead to one. Then an attack error from the Tigers tied things up before Makayla Morrison pounded two kills from her left outside spot into the back right corner to give the Hawks a 9-7 lead.

The game would tie at 13, 14, 17, 18, 19 and 20 and then New London's Elly Manning served her way to the win with five straight as the Hawks suffered two long attacks and a defensive error.

The second set was another back-and-forth affair with ties at 2,3,5,7 and 10 before Central Lee started to pull away. A score keeping error at 12-10 was corrected during a New London time out after the Hawks went on a 5-2 run to lead 18-12.

The Tigers wouldn't get much closer in the second game as Macy Watkins and Meghan Hopp put up a some tough defense at the net recording a couple of assisted blocks in the run.

Central Lee jumped out to a 1-0 lead in the third but New London would take over from there and go up by as much as seven at 15-8 behind three kills from Natalie Burden and some tough net defense from Sophie Mallot.

At 23-20 the Tigers got back-to-back errors on attacks from Mallot and Emma Nye to give the Hawks a chance to rally at 23-22 with Hopp getting a point on a dump over the net. Tigers' sophomore Tysann Gipple got a nice attack to land down the right side. Macy Watkins would counter to make it 23-24 New London and then Watkins' next serve was called out much to the dismay of the Hawks student section in the right back corner for a 25-23 New London win.

The Hawks would take a 7-6 lead into the fourth set with Sophie Turner scoring on five straight serves, but New London would go on a 7-4 roll to retake the lead 13-11 and would keep a three to four point lead until Macy Watkins slid a ball just over the net to cut the lead to 23-21 New London. An attack from Alix Congdon would go wide on the next New London serve, but Hopp would respond with a big kill on Mallot's service for a 22-24 score.

Burden would then clean up the match with a kill off a Macy Watkins' service point.

Cook said some poor passing kept the Hawks from taking full advantage of Hopp and Morrison at the net.

"Definitely our passing needs work and just in general our serve and receive. That's something we've got to work on. It's been a weakness of ours for a while," she said. "We drill it a lot, but we're going to continue to do that."

But Cook said Hopp and Morrison were impactful in both the front and back courts.

'Makayla's our go-to hitter, and not only that, she does well in the back row as well. In times of we need to take advantage of that because she can spray the court and knows where the spots are," Cook said.

"But Meghan is an animal in the back row and usually doesn't let anything drop. She did very well in the front tonight, too. Those two girls are our primary attackers for sure."

Alivia Myhre had 4 block assists. Alix Congdon served 13 for 13 with an ace and had 12 digs. Sophie Turner served 15 for 18 with two aces and had six digs. Karissa Moeller had 4 digs.