Former Humphrey building has had no repairs and is shifting 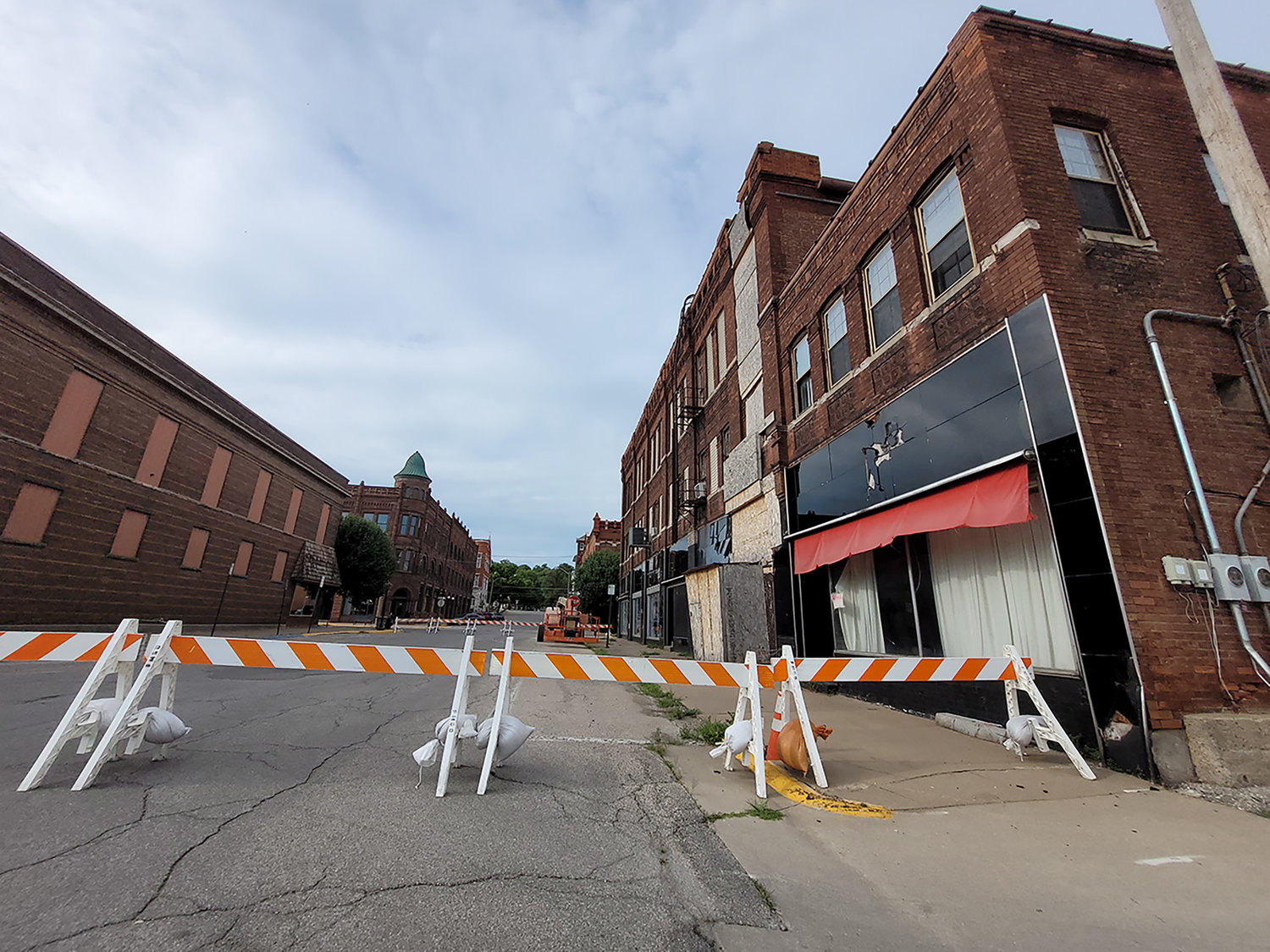 City officials have blocked off all of 8th Street between Avenue G and the alley to the south for fear of further deterioration of the former Humphrey building.
Photo by Chuck Vandenberg/PCC
Posted Monday, July 25, 2022 7:14 pm
Crumbling building

We're of the thought it may collapse, so we just shut the whole block down.”
Fort Madison Fire Chief Joey Herren
Repairs

City partnering with developer on options to shore up building.

FORT MADISON - The barricades that are up again on 8th Street in downtown Fort Madison are a visual reminder of the ongoing nuisance that the James Block building has become for the city.
Last week the city again put up the barricades, but unlike when the barricades were up last year closing off a lane, this time the barricades have the entire street shut off due to fears the deteriorating structure is going to fall.
Fort Madison Fire Chief Joey Herren returned from a vacation and noticed the building had drastically changed, prompting the city to close off the street for safety of pedestrians and motorists.
"Since the time I left, there has been some drastic changes. There's a quite a bit of push out at the bottom and there are also some more windows shifting and breaking at the upper levels," Herren said.
"We're of the thought it may collapse, so we just shut the whole block down."
He said the city is still in talks with developers, while architects and engineers are looking at the ongoing issues. The city took control of the building in March because the private ownership hadn't made any court-ordered improvements. To date, the city hasn't made any repairs to shore up the building, a move Fort Madison Mayor Matt Mohrfeld said is coming as soon as plans with developers are finalized.
"As soon as possible," Mohrfeld said regarding when the city or any developers would make the repairs.
"As of Friday we have a developer with preliminary interest in the building. We need to have that group's key people and the city's key people in the room and finalize doing that and transfer the property."
He said the process will involve some time but it is in motion.
The scope of the breaches in the building and the short-term resolutions are what is front and center with the proposed developer. Mohrfeld said he was keeping the name of the developer confidential for now.
In May of 2021, the courts gave the city permission to vacate the building due to the unsafe standards, and to possibly make repairs. There has been no blessing from the city for City Building Director Doug Krogmeier to authorize any repairs on the building to this point.
"We've contracted with someone to go in and assesses the building and do a stabilization plan, but it's essential to me that a potential developer be involved in the stabilization, because if they have different plans for the building, I don't want to see money wasted on that," he said.
"So we've agreed on the person to do that assessment and that's where we are at now."
Mohrfeld said he has asked that additional assessments be done on different areas of the building so a top-level investigation is done.
When asked what the dollar value of those assessments and improvements look like, Mohrfeld said he had no idea.
"I don't know what that will look like, but what I can say is that I haven't given up on this building. It's part of the key to downtown. It's huge commercial space that plays right into about 20 of the 400 units we need to grow Fort Madison," he said.
"It needs to come back to life."
Courts ruled last summer that the building be vacated due to dangerous conditions. Then in November, the city filed a motion to assume ownership of the building to help secure it and then prepare it for future development after years of owner Bryan J. Humphrey failing to bring the building up to acceptable standards.