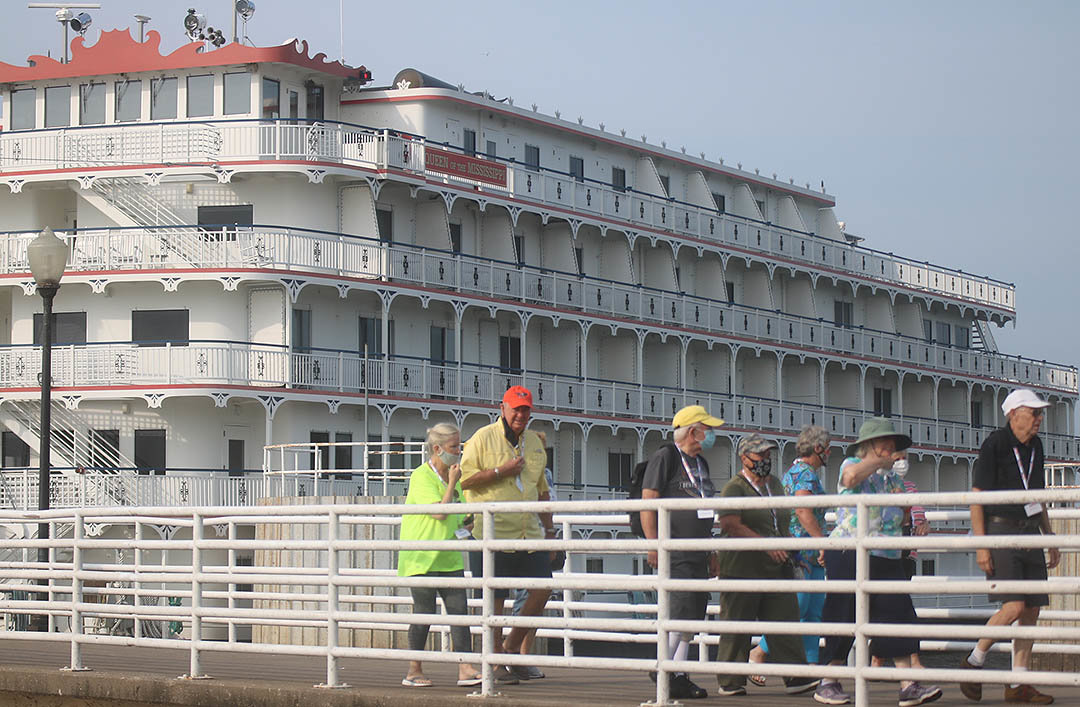 Passengers begin to come off the Queen of the Mississippi at about 9 a.m. Thursday morning in Fort Madison. Photo by Chuck Vandenberg/PCC
Posted Thursday, July 29, 2021 11:54 am

FORT MADISON - After a first cruise liner had to bypass Fort Madison a week ago due to delays, American Cruise Line passengers disembarked for the first time in 2021 on Thursday morning at about 9 a.m. on the Fort Madison riverfront.

Staff aboard the Queen of the Mississippi had to navigate some shallow waters, but eventually got moored to the city's pier on the west side of Riverview Park just before 7:30 a.m.

With service groups, city officials and some area on-lookers there to receive the visitors, several hundred passengers were quickly ushered onto ACL buses for tours to area agriculture spots, the Old Fort and other tourist destinations around Lee County.

Robert Williams, of Denver, got on board the cruise liner in St. Louis and said it was his first time traveling along the Mississippi. He said he's taken tours with Viking Cruise Lines in France, but hadn't had a chance to cruise on the Mississippi.

"When you're young you can't afford to do it. But when you get a little older and get the kids out of the house you can go. So we're free to go. And you just fly to one place and they take care of you all the way to the next place. You really can't beat it."

He said the boat stopped in Hannibal for the day on Wednesday, and then there is entertainment nightly on the boats after they get moving again.

He said the ships are usually parked all day and passengers get to move around the cities along the route.

"All my life I've driven across the country, but I've never had the chance to visit the Mississippi River towns and I'm finding this to be very neat."

Williams said he was grew up on the Ohio River in Augusta, Kentucky, "where George Clooney is from" and knows the river life, but said the Mississippi River culture is quite a bit different. He said the landscape and vistas of the river valley are a stark contrast to the mountains of the Rockies.

"I can see Pike's Peak from my driveway, but you don't get to see views like this where I'm from," Williams said looking back at the Fort Madison townscape from the pier.

He also said he enjoyed the locks along the river and how that system works. But he said he was surprised at how few structures there are along the river until you get to the river communities.

"Everywhere you go in this country there's different food, different people, different accents," he said. "We came in a group of eight - two couples from Pennsylvania, one couple from New York and us from Colorado. We all get a vacation but we also get to meet together. And that's the key, right there."

David Bentler, of Nauvoo, tracked the boat from Hannibal, got up in the morning and made the trip up to Fort Madison to look at the boat.

"I think these boats are neat and I like to come up and see them when they're here. And it's really good for the area," he said.

Bentler grew up in Mt. Pleasant and then moved away before buying a second home in Nauvoo to stay close to the area.

Bentler chatted up one of the boat officers and some staff who were trying to hook up to the city's water, but were taken back a bit by some neighborhood spiders that had decided to rest on the connection. The two deck hands dropped the connection cover and jumped back at the site of the arachnids, drawing laughs from Bentler.

City officials are planning for about 20 more stops this year if the pandemic numbers don't rise again and weather holds out.

Almost all the passengers coming off the ship were wearing masks as they entered the buses for the tour that will run throughout the day. Lunch and dinner are provided on the ship, but passengers are free to roam about the downtown area, where they can shop and stop in for snacks and drinks, or even a meal if they choose.