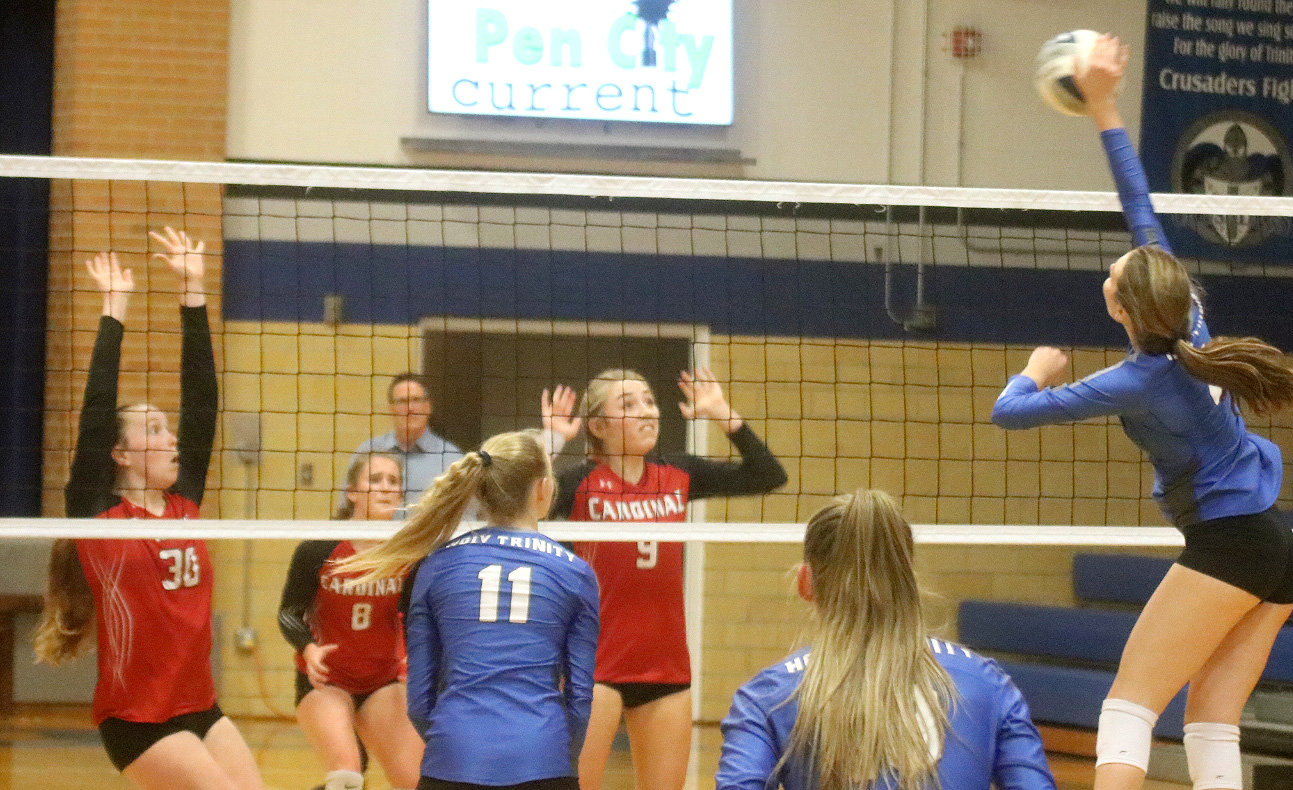 HTC senior Kassi Randolph goes for one her 25 attacks on the night without an error. Randolph had a rare triple double in kills, assists and digs for HTC in the 3-set win over Cardinal Thursday at home. Photo by Chuck Vandenberg/PCC
Posted Friday, October 8, 2021 12:20 am

FORT MADISON - The Crusaders needed a layup of sorts heading into the final full week of volleyball.

The No. 5 Crusaders hung onto their top 5 mark despite losing in three sets to Class 3A No. 9 West Burlington Tuesday night on the road.

Holy Trinity wasn't tested in the win, but got just a tad off kilter in the third set.

"We were sharp tonight and we were able to run a little bit of our offense and I thought our distribution was pretty good," Freesmeier said.

"We had a little lack of focus, but they settled in and handled the ball well and did the things we asked them to do. It was a good game for us to get back into the swing of the things."

Anna Sobczak lead the Crusaders defensively digging up 17 balls. Natalie Randolph was 12 of 13 serving with five aces and had eight digs on the night. Randolph and sister Kassi Randolph combined for 30 assists. Kassi was 25 of 25 attacking with 12 kills. Natalie went 22 of 23 hitting with six kills. Mary Kate Bendlage was 20-23 attacking with six kills, while Brooke Mueller was 16 of 17 hitting and dialed up seven kills.

The Crusaders jumped all over Cardinal from the opening whistle going up quickly 10-2 in the first set with Kayla Box and the Randolphs all getting kills. Bendlage would find some wood from the outside left side to make it 12-2 and HTC was off and running.

Holy Trinity would push the lead to 21-5 on a net violation by the Lady Comets. Mueller would take over serving off the side out and run out the match 25-6.

The song remained the same in the second set with HTC rushing out to a 12-3 lead on Bendlage's block in the middle. After a couple side outs, the Crusaders would get back-to-back kills from Kassi Randolph and Box to make it 17-7.

After a Cardinal time out, the Comets would get a point on a side out, but then HTC would take the serve back and Natalie Randolph would run off five straight service points to wrap up the second set.

Cardinal would hang around half way through the third set trailing by just three at 11-8, but Natalie Randolph, Alexa Dingman and Teagan Denning would combine to go 10-12 over the next dozen points before Kassi Randolph cleaned things up at 25-13.

Thursday was Senior Night and Freesmeier said seniors Kassi Randolph and Sobczak have helped lead the younger players all year.

"They did the things they've done all year and that's lead this group of young kids," she said. "They've done a great job and they will be missed, but right now they're just having a lot of fun."

The Crusaders travel to Pella for a loaded Saturday tournament with teams from Bondurant, Iowa City, Pella, Mediapolis, Knoxville and others all in the mix. Iowa City Liberty will be on hand and they are the top Class 5A team in the state. Pella is 10th in Class 4A and Bondurant-Farrar is 8th in 4A.

Holy Trinity has a match with Central Lee on the road next week, the Mediapolis tournament on Thursday, and then another loaded tourney in Knoxville on Saturday to close out the regular season.