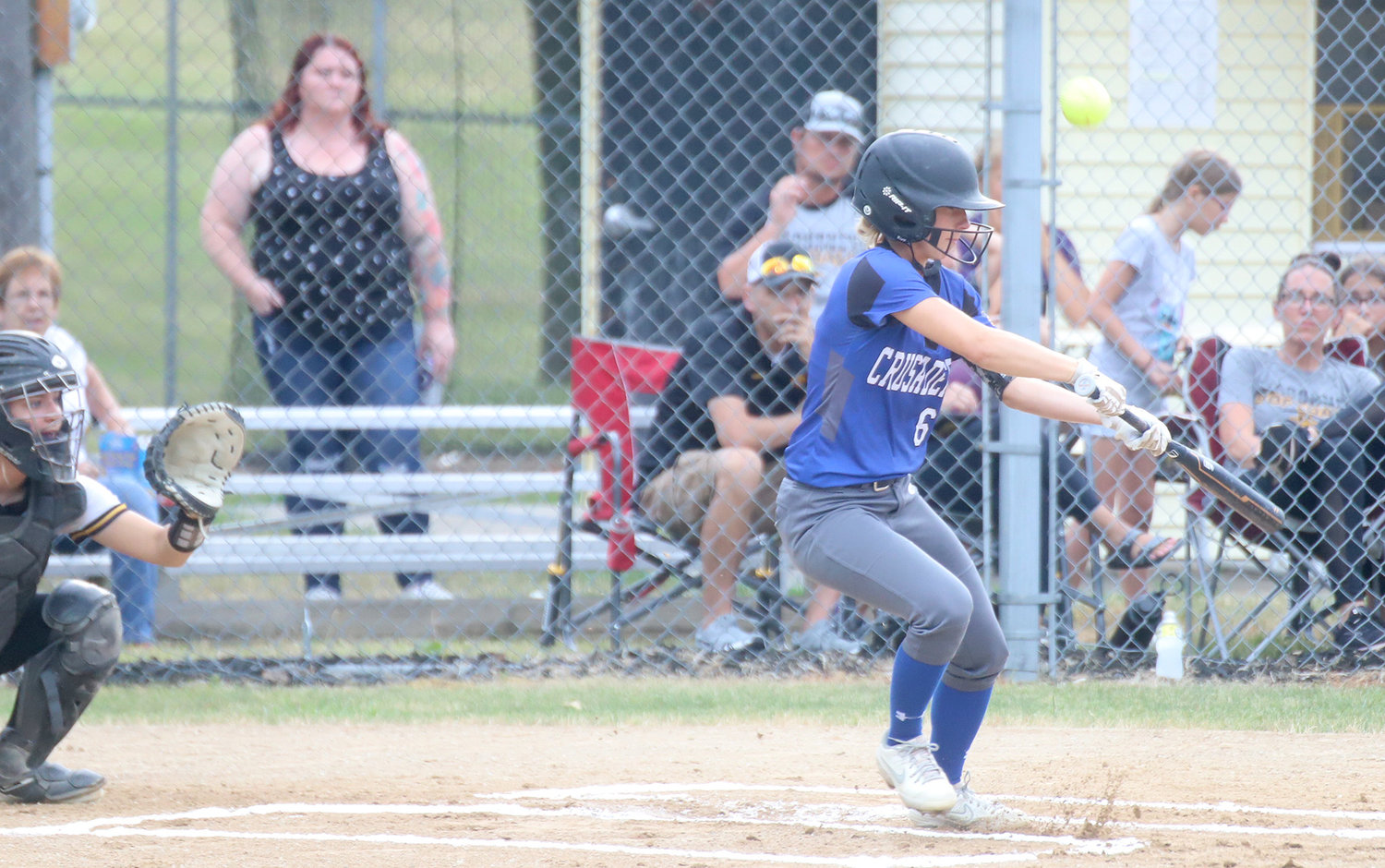 HTC's Anna Sobczak tries to get a drag bunt down in the third inning but pops the ball back foul. The Crusaders fell 11-1 to Sigourney to end their season at 10-11.
Photo by Chuck Vandenberg/PCC
Posted Thursday, July 7, 2022 1:01 am 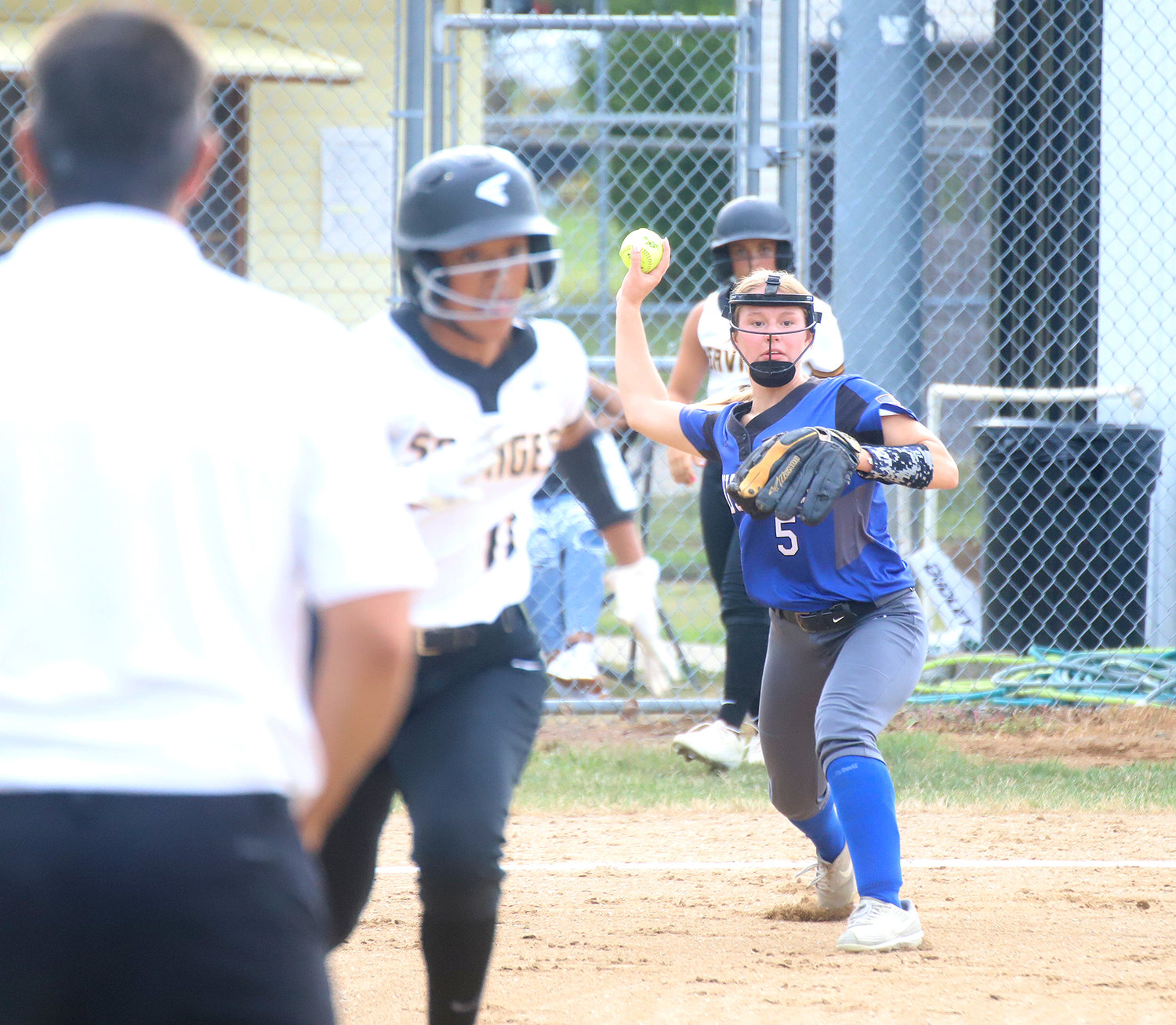 HTC's Kayla Box (5) comes up throwing after Sigourney's Amiya Smallwood (11) tried to bunt her way on in the second inning.
Photo by Chuck Vandenberg/PCC
Mission accomplished

Holy Trinity Catholic had two goals to start the year - to win 10 games and win a post-season game. The Crusaders beat Winfield-Mt. Union 9-5 on Friday for their 10th win and first post-season win under Menke.

SIGOURNEY - After the first two innings, you'd have had trouble telling the 11th ranked team in Class 1A from the 10-11 Holy Trinity Catholic Crusaders.
But a big 3rd inning from Sigourney set a tone that wrapped up the Crusaders' season that saw Head Coach Loren Menke's squad reached both of their preseason goals.
The Savages would use a 6-run third inning to open up an 8-1 lead en route to an 11-1 win in five innings in Class 1A Regional 8 quarterfinals Wednesday night.
"Winning 10 games in a season is something we hadn't done since 2006 or so," Menke said.
"One of my goals going in, personally, was to try and win 10 games. I thought that would be a nice step going forward, and then to win a post-season game. and we accomplished both those on the same night in front of a good home crowd."
HTC got over the 10-win bar on Friday with a 9-5 win over Winfield-Mt. Union at South Park to open Region 8 play.
Haile Cain and Kayla Box both scored twice in the win over the Wolves and both had triples. Box had two RBIs in the win. Mary Hellige and Jenna DiPrima both had two-hit games and Hellige got the win going all seven and shutting the Wolves down in the bottom of the seventh.
But Wednesday's game was against a much better team in the 11th-ranked Sigourney and the Savages found a way to get to Hellige in the third after the two teams were tied at 1 at the end of the first. Sigourney held a slight 2-1 advantage after two innings of play and would bring in sophomore Carley Goodwin in the third to keep HTC's scoring down.
Goodwin would work a clean top of the third, and then Sigourney turned up the heat.
Rain Barthelman would reach on an error, steal second, and take third on a wild pitch. Josephine Moore would get hit by a Hellige offering and then take second on defensive indifference with a runner standing at third.
Macy Fisch would then hit a liner to Cain in center that scored both runners for a 4-1 lead with no outs. Hellige would catch the next hitter on the foot to put two on.
Darby Mitchell would hit into a fielder's choice, but beat the throw out at first to load things up.
Hellige would get a come-backer for a force out at home for the first out and then got the next hitter to put out in the infield keeping everyone on the bases. But a grounder to second just slipped under the glove of Kelly Meierotto who knocked it down but couldn't make a play, allowing another run to score for a 5-1 lead.
With the bases still loaded, Fisch then slammed a double in between Cain and Kylie Fortune in right center scoring three runs before Hellige could get out of the inning down 8-1.
"When we go against these really good teams, we always have one or two innings where we just collapse. We just have to make the plays, but they had a lot of good hits, too, so it wasn't just about making plays tonight," Menke said.
HTC wouldn't be able to get anything going the rest of the way with Goodwin striking out the remaining six hitters, while Sigourney put up three more runs in the bottom of the fourth on an error in right field and a wild pitch.
The Crusaders will lose seniors Alesha Hellman, Meierotto, and Sobczak to graduation. Menke said he's coached Meierotto and Sobczak since t-ball and will miss the seniors.
"Those two played with me in t-ball and Alesha played against us in Houghton for town ball and then joined us in junior high," Menke said.
"They are all three just great people and they will be very successful adults."
He said Hellige was a leader on the team and handled all the pitching chores for the season.
"You're not going to get a harder-nosed player than her. If there was any fatigue in the season, she never let me know but probably because she knew I was worried about her."
He said the maturity in the team was another surprise for him as the team improved and handled situations better.
"They were more mentally tough and it was cool to see that after coaching these kids that long and see that growth."