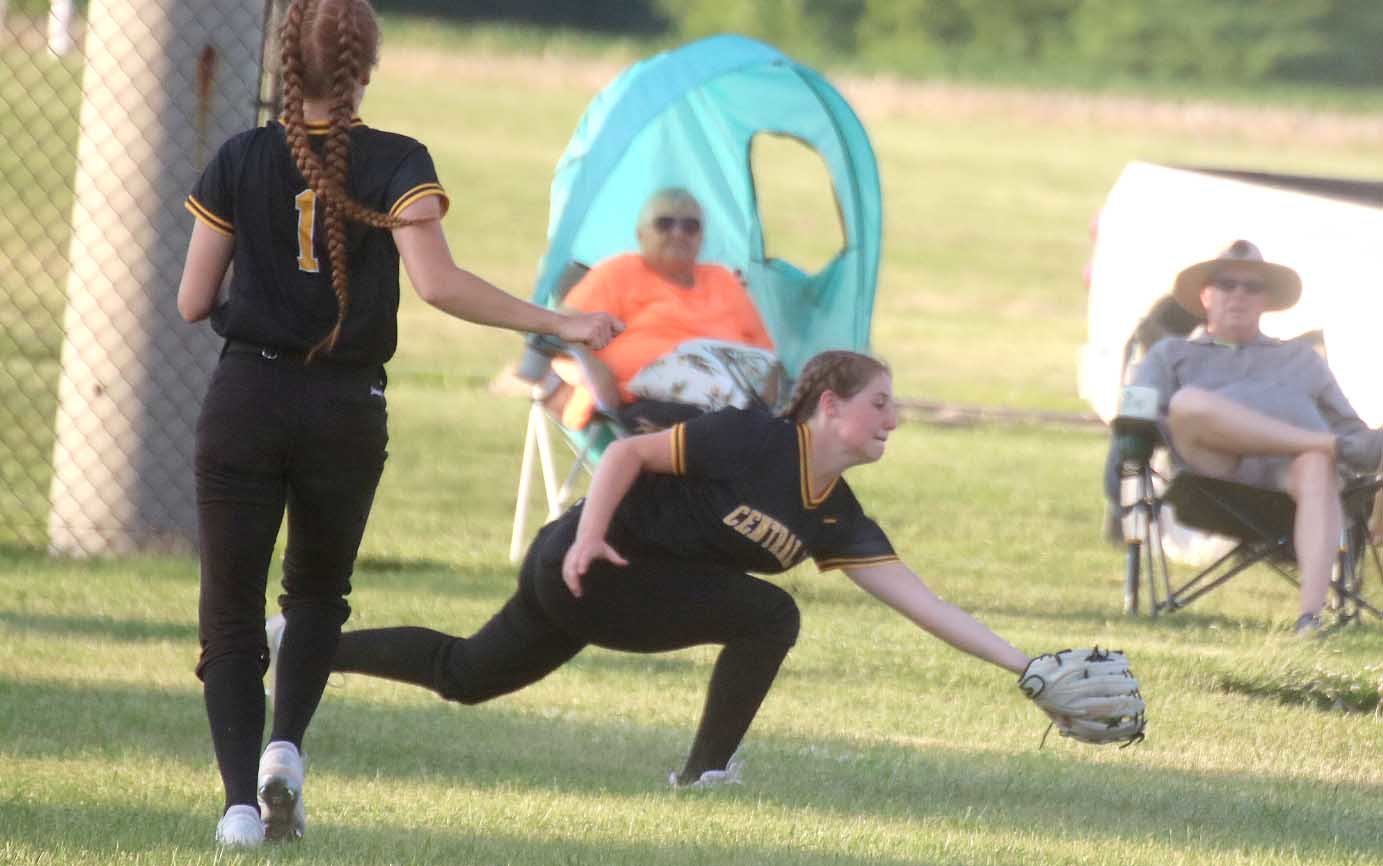 DONNELLSON - The Lady Hawks rolled a triple play Wednesday, but not really - but really they did.

The Central Lee girls recorded four outs in the top of the sixth, and would score on a bobbled ball at 1st with two outs in the bottom of the 7th for a crazy 4-3 win over Winfield Mt. Union Wednesday night in Southeast Iowa Superconference softball.

With one out in the top of the sixth and the scored tied at 3, Winfield Mt. Union (8-2) had Melina Oepping at 3rd and Josie Nelson at 2nd on a single and an error. Junior Carlee Sloan then lifted a fly ball to Abby Simmons in right field. Simmons closed on the fly, fired home to catch a sliding Oepping by a step for the double play.

But senior catcher Halo Arrowood, forgetting the double play ended the inning, fired down to third to get Nelson trying to tag from second for what would have been a triple play.

Even the base umpire called Nelson out at third, as the fans went wild at what appeared to be a quirky 9-2-5 triple play. Winfield's head coach even questioned the call at third until the umpire quickly reminded him that the third out was actually at home.

It was all part of a defensive clinic of sorts from Simmons who also had a sliding catch in right field in the top of the 3rd to rob Sloan of base hit.

"She had a couple great catches and then that play to start what everyone thought was a triple play, that was a huge play to get us out of that inning," Woodruff said.

Sophomore Bailey Schwartz almost had another moment for the highlight reel when she laid out for a liner to left, but ended up trapping it with two outs in the top of the 2nd.

Two innings later Schwartz would run full on into the left field fence trying to track down Jobey Malone's double down the line. Schwartz would be tended to briefly for bloodied nose on the play.

"That's her first night playing left field. She usually plays third and I told her to just go for whatever she could - and she did," Woodruff said with a chuckle.

Central Lee opened the game with three runs in the bottom of the first. After Macy Watkins flied out to second to open things, Arrowood, Shanna Buford and Meghan Hopp all singled to load the bases. Makayla Morrison then flew out to left scoring courtesy runner Carlee Pezley on a tag.

Simmons would then hit a fly to left that was dropped for a 2-run error scoring Buford and Hopp, before a strikeout ended the inning.

Both pitchers would then dial in with Sophie Turner in the circle for Central Lee and Madie Anderson hurling for the Lady Wolves.

Turner would give up just three hits through four innings, but Winfield would get to her in the 5th.

Oepping led off with a single and then a couple errors cost the Hawks some runs. Buford fielded a sacrifice bunt off Josie Nelson's bat but the throw got in the dirt and past Morrison at first allowing Oepping to come all the way around to score, while Nelson moved all the way to third.

Nelson would then score when Arrowood tried to catch her leaning at 3rd and fired down the line, but the throw was offline and Nelson would come in to make it a 3-2 game.

Sloan would then single to right prompting a visit to the mound from Woodruff to try and settle the Hawks.

Turner would entice a couple of fly balls for two outs after the huddle, but then Malone would single to right advancing Sloan all the way to third before Winfield's Emma Haines singled up the middle to drive in Sloan and tie things up at 3.

The Hawks went 1-2-3 in the bottom half setting up the sixth inning dramatics.

With the score tied at 3 heading into the 7th, Turner gave up a single to open the top half. After a fly out from the next hitter, Malone would single to center to put runners at 1st and 2nd with one out. Haines then popped the first pitch up and back and it was Arrowood's turn for a gem as she tossed the mask and made the foul catch running into the backstop fence.

Turner would get Keeley Malone to fan for the third out.

With Central Lee at the bottom of the order in it's half of the 7th, Turner flied out to right. Schwartz would then reach on a fielding error on her grounder to short and moved to second on the errant throw. Alix Congdon would then move her over dropping a slide sacrifice bunt.

Macy Watkins then worked a full count before hitting a grounder to Oepping at third. Oepping's throw was at the feet of Jobey Malone at first who couldn't glove up the ball before Watkins reached the bag, allowing Schwartz to score the game winner unearned on the play.

Woodruff said it seems to be a season of games being decided in the 7th.

"We're just a 7th inning team. It's seems like every game we play into the 7th inning. We just have to eliminate that one inning of bad errors," she said.

She said players have been playing positions they aren't used to as the Lady Hawks try to find their identity.

"Right now we're moving things around and switching things up as we adjust and figure our field out," she said.

"Last night was not our game at all and then we come out here and do this. This kind of game helps us a lot. We have Highland tomorrow night which will be a pretty good team as well. So, hopefully we can transfer this over."

Buford was 2-3 with a run scored and Morrison had the only RBI for the Hawks. Arrowood and Hopp had the other two hits for Central Lee. Turner went the distance giving up nine hits and three runs, none earned, while striking out five and walking one.

Central improves to 6-3 on the year and hosts Highland in a 7 p.m. game Thursday night. They travel to Pekin on Friday night for a 7 p.m. game after playing the last four at home.