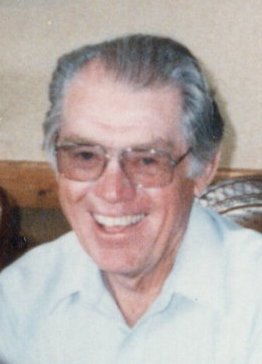 Bernard “Bun” Logsdon, 93, passed away surrounded by family and his grand dog, Bonnie, on Saturday evening, November 6, 2021 at River Hills Village in Keokuk, Iowa. He was a devoted family man who was widely admired for his kindness, wonderful laugh, cheerful can-do attitude, gentle personality, and good advice.

The fifth of ten children to Gabe and Nora (Uhlmeyer) Logsdon, he enjoyed a happy childhood growing up in St. Patrick, Missouri with his seven brothers and two older sisters. From a young age, he was a strong student. He started first grade at age five and graduated at age 16 (Class of ‘45) from St. Patrick Catholic High School. He attended St. Louis University for one semester, but funds running short, returned to work home to work with his dad in the grain business. Soon he met the love of his life, Joan Schreck, at the 1946 Fourth of July dance in St. Patrick. They were married six months later on January 2, 1947 “to start the year off right.” As the saying goes, the rest was history. They had nine children and stood together through life’s many blessings and challenges for nearly 75 years. Most of their married life was spent in Keokuk, living on Carroll, Rainbow Drive, and Eicher.

Traveling and reading were great joys. Starting in 1958, he took the family on a driving vacation every August. He took an international trip in 1965, substituting for his brother Jim for an agricultural tour of South America. While on the trip, he visited his oldest sister, Sister Pauline Logsdon, a missionary in Chulucanes, Peru. The experience was a highlight of his life. He and Joan frequently attended the travelogues at the library. Bun was also an armchair traveler with his voracious reading of the Michener novels and the latest recommendations from family and friends. Baseball was yet another joy that began with playing as a youth and rooting for the St. Louis Cardinals throughout his life.

One of the founding members of the family business, Gabe Logsdon & Sons Elevator, Bun was in charge of loading grain on barges on the Mississippi River at Gregory Landing, Missouri until 1975 . It’s been said that after he left, when faced with a challenging problem, some would ask, “What would Bun do?” For a second career, he bought acreage near Alexandria, Missouri, and became a grain farmer. He enjoyed the work and felt a great deal of satisfaction and pride in helping to feed the world. At the farm, he taught his younger children how to work hard and feel a sense of accomplishment.

Bernard instilled a love of education in his children, all of whom graduated from Cardinal Stritch High School and went on to earn at least one college degree. He was active in helping the Keokuk Catholic Schools for several decades. He served on the board and worked on the annual fundraisers. He was a member of St. Mary’s and then All Saints Parish and served as a lector at Sunday Mass for many years. He was also committed to being a good citizen, always voting and volunteering to get out the vote for many an election. He studied public issues and supported policies that strengthened fairness and opportunity for all.

Throughout his life, Bun loved hunting, fishing, and mushroom hunting with his brothers, nephews, and friends. Once he decided to do it, he was devoted to new health habits, such as giving up smoking and sugar, and walking around Keokuk up to five miles a day.

The family would like to thank the staff of River Hills Village for their loving care of our parents for the last five years.