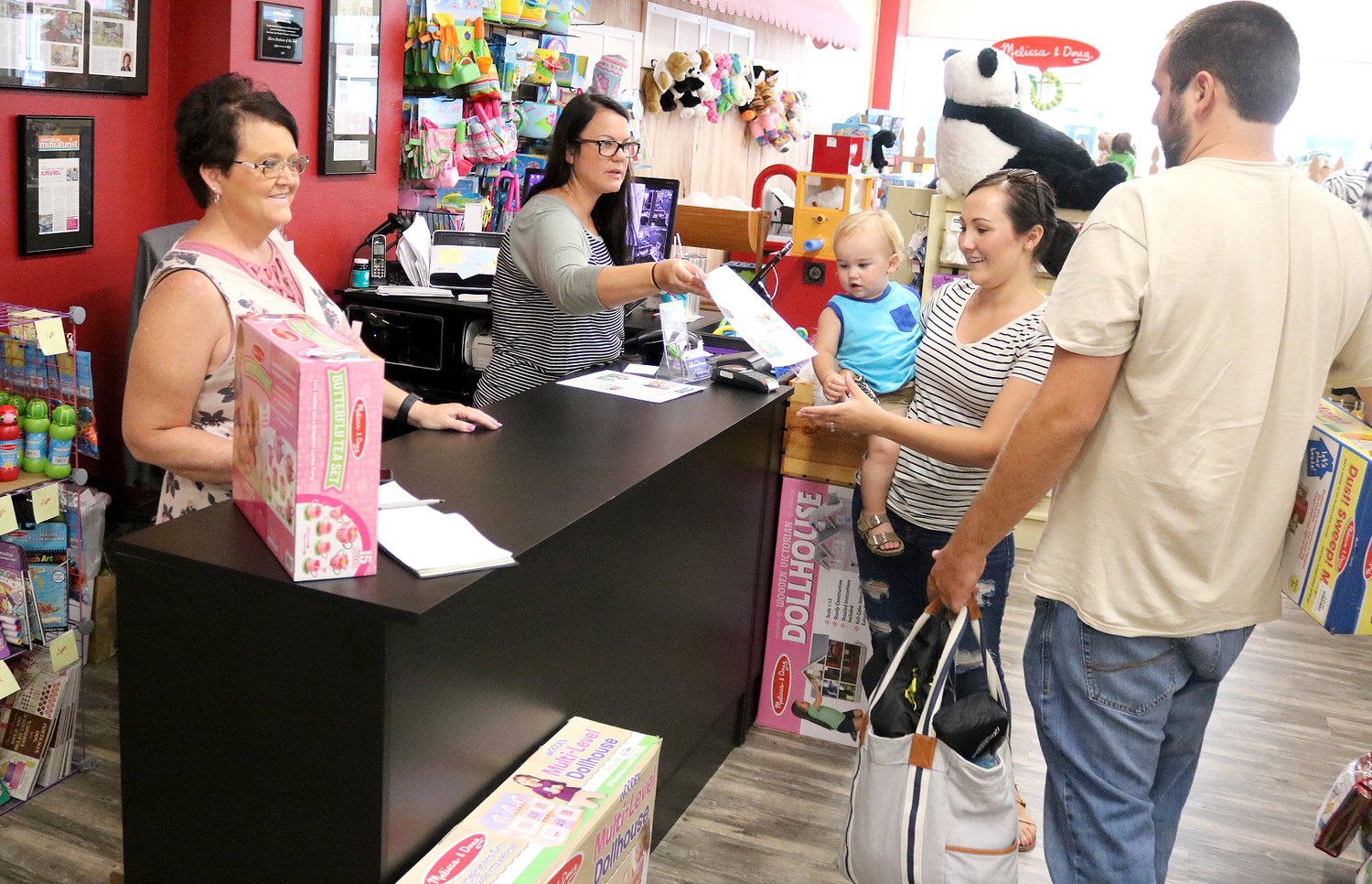 FORT MADISON - Although her father is no-longer alive, Brenda Derr is using her dad's nickname for her as an inspiration in her new business venture.

Derr, the owner of Dollhouse Dreams in Fort Madison, will be opening a new location this fall in a retail outlet in Burlington near Dick's Sporting Goods on Agency Street.

With a focus on educational toys and her Melissa & Doug collections, Derr wants to create an environment where children feel free to experience playtime again. But she's pulling from her past as a child when her father used to call her "Shug"...short for sugar.

"The new place is going to be called "Shug's Tiny Town" in honor of my dad. That's what he used to call me when I was little, 'Shug'," Derr said.

Her premiere line of Melissa & Doug toys was created by Melissa and Doug Bernstein, a husband and wife duo who started a toy company in 1988 in their basement and Doug's parents' garage and is headquartered in Wilton, Connecticut.

Derr said the company's philosophy is to take childhood back and Derr said the toys can bring back creativity and engagement that may be at risk in an ever-increasing digital world.

"We need to try and get kids away from all that and get them back into imaginative play and creativity. That's something they will take with them later in life," she said.

"This is gonna be fun, it really is. I'd like to be up there all the time."

Ashley Enger will be Derr's manager at the new facility.

"She's got some really good ideas on different things for the kids to do. We'll probably start a craft night up there like we've done here and a toy tester program. We might have a dress up party for the girls because there will be a boutique... or a fire drill with the firehouse."

She said she's been thinking about opening another location for years.

The sales rep with the Melissa & Doug line had been encouraging Derr to take the next step and open a new location.

"I knew it was going to happen I just didn't know when. And, of course, then the storm came and we dealt with that, but that spot in Burlington has been calling my name for years," she said.

The storm was an early 2017 spring thunderstorm with heavy winds that damaged the roof of the current building at 824 Avenue G. Derr had to renovate and repair a major portion of the building, while working out of a location next door. The current location also houses Megan's Old Fashioned Ice Cream Parlor where patrons can experience a mid-1900s lunch counter and ice cream parlor.

Derr said after taking a vacation in January she went up to Burlington to meet with the owners of the retail center and worked out a lease and got the ball rolling.

She wants the new location to be very interactive and educational. In addition to the Melissa & Doug line, she's hoping to bring some other lines in as well.

"It's going to be all educational toys. Since we're a premiere partner with Melissa & Doug, we'll continue to carry that line, and we'll bring in other lines, but I'm just not sure what those will be yet," Derr said.

The 4,300 square foot retail space will also include a "Pay and Play" area for the kids that will consist of a fictional streetscape with structural homes and buildings that the kids interact with. Some of the buildings planned include a firehouse, a diner, and a beauty parlor that will be completely interactive for children.

"That came about because we have so many interactive toys here and the kids love to play with the toys. I ran across it on the Internet and just thought it would be a nice fit for up there," she said.

She's hoping to start construction very soon and be open in September or October. Derr said she's planning a grand opening in October to help kick off the holiday season with a huge Melissa & Doug sale. She is planning on having the store open seven days a week through the holiday season, but the hours are still to be determined.

She said she's had success selling toys in a world dominated by digital gadgets.

"If you take the phone away, they'll have to play with this toy and they'll be creative and they'll play," she said. "We kind of have to help them as parents and encourage them, but kids know what to do, they just have to be presented with it."

Dollhouse Dreams will be holding a Toy Tinkering Experience next Saturday at the Fort Madison location where kids can come into the store and "tinker" around with toys in the shop. There will also be a 20% discount on all Melissa & Doug toys for one week starting on Tuesday.