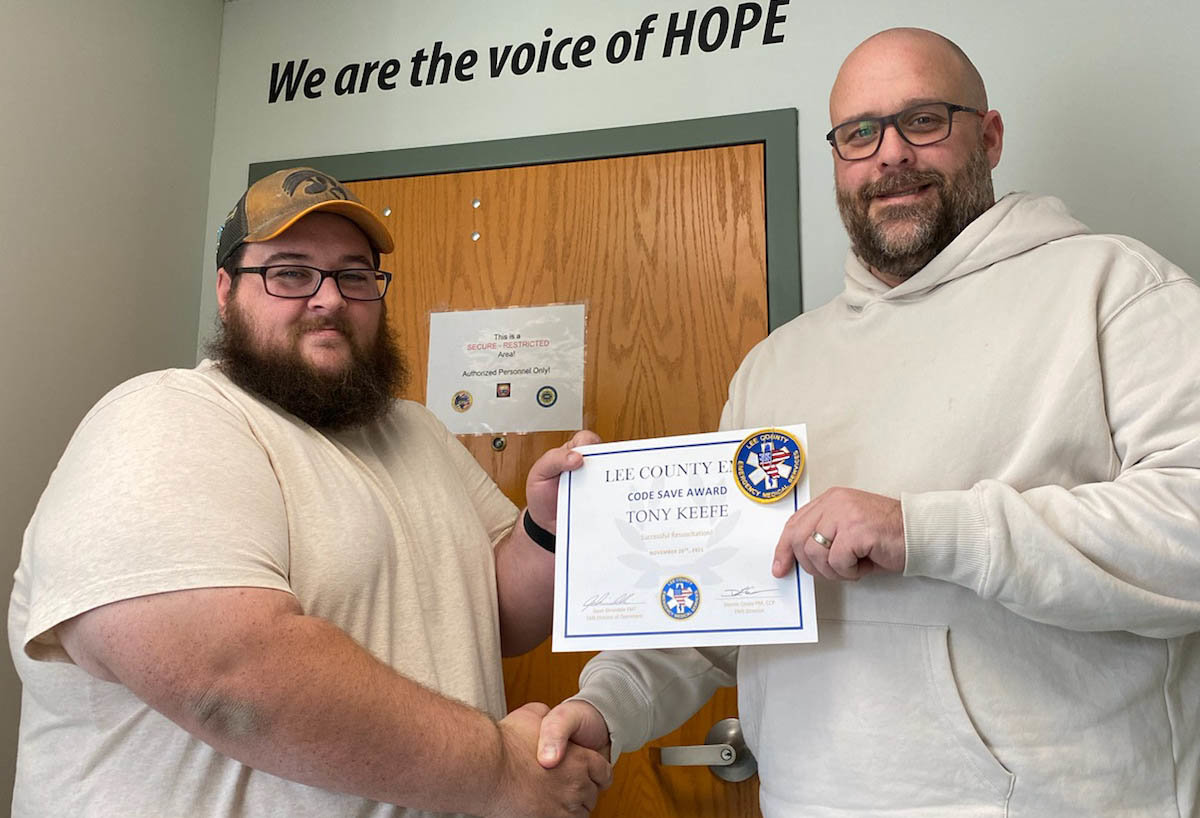 LeeComm dispatcher Tony Keefe, left, is presented a Code Save Award from LeeComm director Travis Solem Tuesday. Keefe was instrumental in saving a woman suffering a heart attack by utilizing a response script software that instructed the victim's spouse over the phone on how to administer CPR. Courtesy photo.
Posted Tuesday, December 14, 2021 3:26 pm

LEE COUNTY - LeeComm dispatcher Tony Keefe has less than a year of certification with Lee County's new Total Response software, but the time training came in handy on Nov. 20.

Keefe was manning a LeeComm E911 line on that day when a call came in from a man whose wife was suffering a heart attack and was unresponsive.

In a matter of moments, Keefe worked with other dispatchers to send Lee County EMS to the location of the incident and then pulled up what's called a Total Response software suite on his computer screen and began instructing the husband on how to provide CPR.

With Lee County Ambulance about seven minutes away, Keefe went to work talking the man through administering CPR. As medical crews arrived, the woman had regained a pulse and was breathing on her own.

Keefe said his instincts just grabbed onto his training with the software.

"There's a little nerve that kicks in with every 911 call you get and you hope don't have to fall back on your training," Keefe said.

"I take these classes and trainings to get these certifications and it's not a case of if you're going to use them, it's a question of when. Instinctively, once you hear that someone isn't breathing, immediately kicks you over to finding out what's happening to preserve life."

Travis Solem, the LeeComm director, said the software was implemented when the county took over the ambulance service in July. Prior to that, all calls for EMS services were forwarded to Lee County Ambulance dispatchers as part of that private group.

"LeeComm recently upgraded their call center with Total Response® Emergency Call Handling software to guide their dispatchers through all types of emergency calls. This change is already paying off for the call center and the community," Solem said.

"Within seconds, the dispatcher sent EMS to the home, pulled up the CPR procedure in the Total Response software, and guided the caller in how to get started doing compressions."

Solem said getting CPR started as soon as possible has a tremendous impact on survival rates.

"If it wasn't for this dispatcher's preparation and tools, this outcome could have been very different," he said.

Lee County EMS presented Keefe with a Code Save Award indicating that his timeliness and CPR instruction led to saving the woman's life.

Solem said the software is based on how the caller answers a preset list of questions. Those answers trigger a script in the system so that dispatchers don't have to go through a recall process.

"You're not doing it off the cuff per se, you're doing things based on prompts from what the caller is telling you," he said. "It gives you something to follow rather than having to think about what comes next."

He said there are different preset scripts for different emergencies such as diabetic emergencies, uncontrolled bleeding, suicide, and fire calls.

"We implemented it about a month after we took over the ambulance and by the time we got all the training done and software installed it was mid-August. Taking over the county ambulance dispatching system came with taking ownership of the ambulance service."

Keefe had just finished his training and proctored certification about 12 weeks ago.

He said saving the life would have been much more complicated had it not been for the team of dispatchers on duty at the same time.

Total Response, the program the dispatcher was using, was created by the Connecticut-based company, PowerPhone. It ensures the dispatchers are prepared for any call that comes through the other end of the phone. It serves as a guide for 911 call takers, allowing them to ask better questions of callers and relay scene information faster and more accurately to Lee County responders. Most importantly, in this case, it gave the caller the life-saving help they needed before responders could arrive.