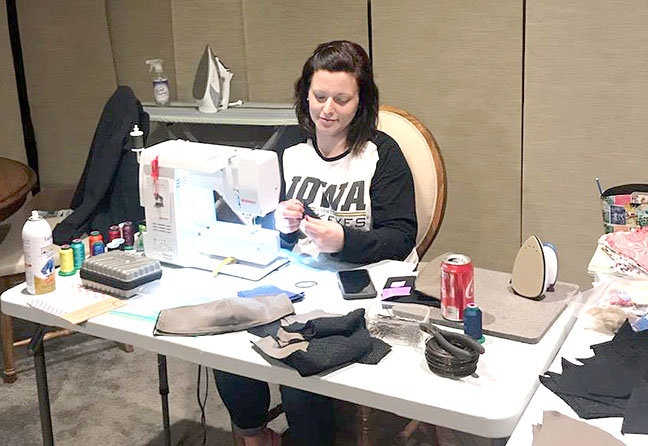 Shelby Burchett, FMCH CEO said Monday the hospital is closely following guidelines set up by the Iowa Department of Public Health and Centers of Disease Control for testing criteria.

Burchett said she was not comfortable talking specific testing numbers because the numbers were small, but said the intent of the restricted testing is important for people to understand.

"We don't know a great deal about this. We're learning about the sequela (the condition resulting from a disease) of it, and the most important information we're getting is that those tests are critical for the sickest patients," Burchett said.

Burchett said getting a test just because you want to know won't change anything unless you are critically ill. Even a confirmed positive in most cases won't change the treatment that screeners and doctors are recommending.

"If people just want to know if they have it, it's not going to change the treatment plan. What we know about the criteria is that they are targeted at the sickest patients and the most vulnerable."

According to IDPH and CDC data, most people who contract the coronavirus will experience mild symptoms. The most recent date provided Tuesday by the state indicates that 93% of those tested are negative.

But Burchett said the hospital sends all tests to the state lab which is a one- or two-day process and then results are determined there. But she said the Great River Health System is now couriering their own tests to the lab, which she hopes saves some time.

"As a health system we're getting pretty close to running every day," Burchett said.

"We have the materials to do the testing, and capacity to run several tests but are being very responsible to the guidelines of IDPH to test the sickest and most vulnerable first."

With resources being strained at the outset for testing, Burchett said the state is doing the best they can and taking the right steps as more is learned about the disease. The gradual ramping up of testing allowed the state to see what's happening across the country and what health care officials were learning, all while best using the resources at hand.

"I think the approach was a good one based on the resources available. This is all brand new to us and, as you could imagine, the testing took a while to ramp up," she said.

"The guidelines have been responsive to the resources available. They've broadened in accordance with that, but the restriction was good at the outset."

To reassure people in the area, Burchett reiterated that the majority of people who contract the virus will have a mild form and are usually able to recover fine at home with a fever and cough being the prevalent symptoms. But she said it's imperative that anyone feeling ill with those symptoms should self-isolate and not just at home, but away from others in the home.

"If they do start experiencing worsening of symptoms they can always call their doctor, and if they feel they are getting an emergent situation our ER is always here ready to assist," she said.

"I would add that if they are able, make a call to provide us with some advanced notice. We do have screeners and we can provide them with a mask to protect others."

The hospital does have a respiratory center set up to triage those that present with possible coronavirus symptoms.

Looking forward Burchett said the health system and FMCH will continue to evaluate the information and data coming particular to this region in to evaluate services and facility readiness and respond accordingly.

"We have, and will continue to tighten the processes in place to make sure we are providing the best care while protecting employees and the general public," Burchett said.

"We will continue what were currently doing which is basically only providing essential services at this point for the most part. We will continue to do that until we feel the current concerns or threat are under control before we would look at opening things back up."

She said the facility is not currently experiencing a critical shortage of personal protective equipment (PPE), but a daily inventory is taking place as supplies are being used as part of the screening process and for patients currently under investigation.

"We're keeping a very close eye on those."

The hospital has received several hundred homemade masks, but have also received other PPE donations from area dentists, industries and businesses.

Burchett said the hospital's plan for the homemade masks are to use them when the other supplies have been depleted as a back-up. She said the masks have to be laundered and are stored in a clean area waiting for use. She said they will be used as single-use and not rewashed.

Angie Budnik, the hospital's community relations director, said the hospital has hundreds of the masks and about 50 volunteers are on a list to make the masks. She said she envisions having close to 1,000 on hand as need rises.

Taylor Freitag, one of the volunteers, started making masks on March 21, not only for the hospital, but has also made more than a hundred for the Lee County Sheriff's Department and Fort Madison Police Department with a team of about five others who helped prep fabric.

Freitag said the hospital recently changed the specifications for the masks and it has made sewing the homemade masks a bit more difficult with the materials that need changed, but she's working on trying to secure the materials to keep going.

"It kind of went crazy. I had seen an article on social media that Cedar Rapids UnityPoint was wanting masks and I followed some sewing posts that referenced it and I stayed up late that night and made a mask," Freitag said.

"I was wondering if FM was going to need them in town so I took a picture and posted it and people started tagging people that worked at the hospital. Eric contacted a couple people and here we are."

She said she's halted making masks for the hospital right now after the change in specs, but hopes to pick up again. In the meantime she continues to make mask for other groups locally and as far away as Quincy. She received an order Tuesday for 100 more and all are done for a free will donation.

Burchett said the hospital has requested for supplies from the national stockpile and they have received some of their requests, but not all, as the federal government routes supplies to the hardest hit areas.

Governor Kim Reynolds has stayed away from a shelter-in-place order for the state, but is instead looking at data and metrics on a daily basis. She said she is more inclined to do shelters-in-place on a community or county basis based on the data. Burchett said she agrees with that process, but doesn't get bogged down in the terminology.

"Regardless of what terminology is used, we are doing our absolute best at educating everybody, whether that's the governor, the CDC, news media, to provide everyone with the power to keep stay safe and keep it from spreading," she said. "That's the most important thing, we will continue to educate. Regardless of what we call it, staying on top of the elements that are critical to prevent the spread of this is what's essential."

Burchett said she would add that the virus has been a real and new challenge for health care and the hospital administration appreciates all the support, prayers and donations that have come their way.

"Those mean a lot. We're having stressful days, long days and long weeks and that makes us feel supported as a community hospital."

Budnik said the hospital is doing everything it can to be ahead of the virus and the changes it brings on a daily basis.

"We have a great leadership team here that pushes initiatives to keep everyone safe," Budnik said.