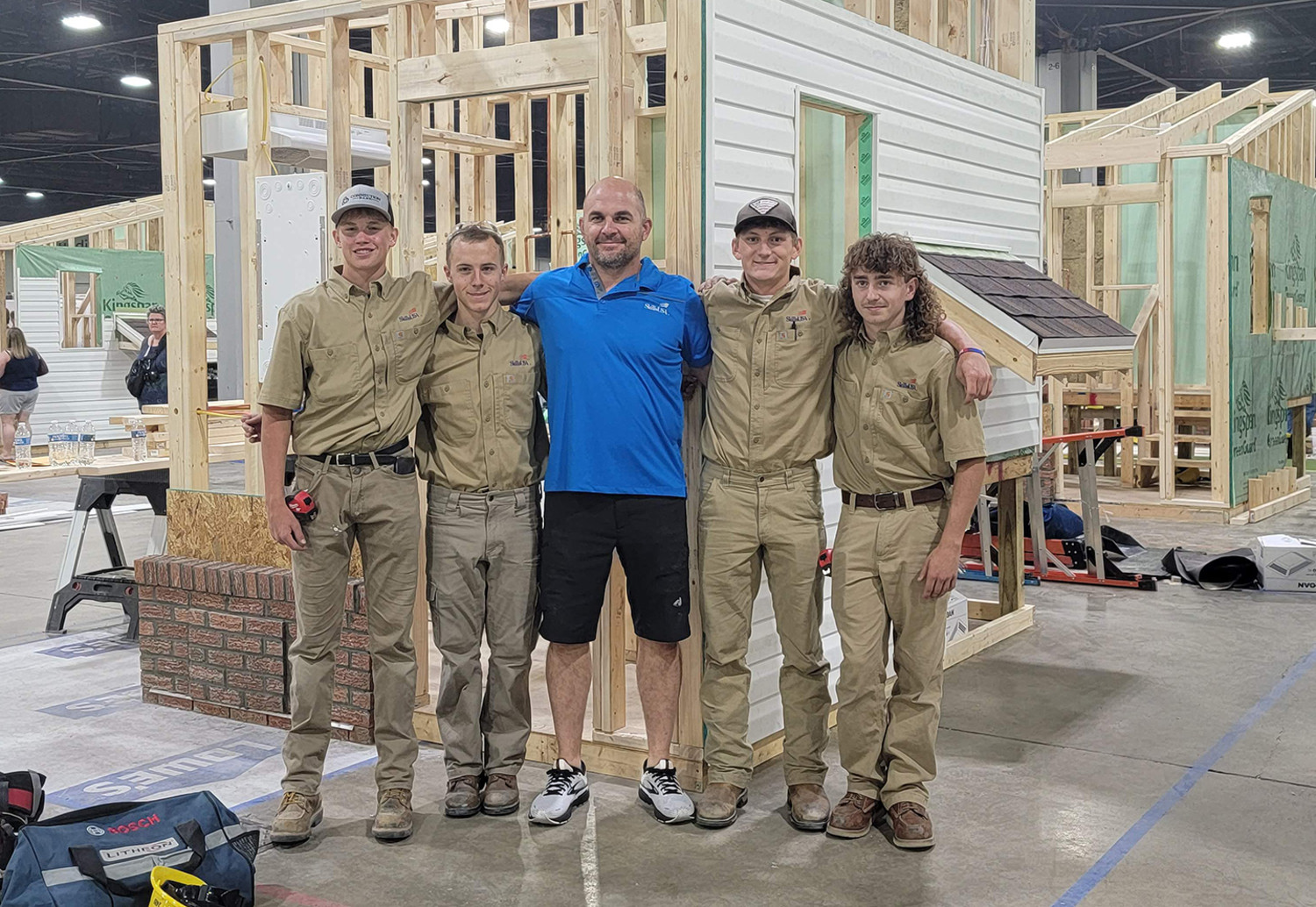 The group of four students including Landes Williams, Emmett Kruse, Andrew Schaefer, and Hayden Wolfe, was planning on attending an award ceremony that night after finishing the build project they were working on for two days as part of the Skills USA TeamWorks Championships in Atlanta, Ga last week.

But the emotional landscape following the U.S. Supreme Court overturning of Roe v. Wade, had the group and instructor Clint Kobelt watching the ceremonies from the airport, waiting for a flight later that evening.

The group left the Georgia World Congress Center early on the advice of officials who said protests around the Supreme Court decision could shut down travel to the airport, so Kobelt made a decision in an abundance of caution to get the boys to the airport early.

But sitting on the concourse, the three seniors and junior Kruse found out they had received a silver medal in the TeamWorks competition making them the second best high school construction trades team in the nation.

"It's just been home run after home run for these guys," Kobelt said Saturday morning after returning to Iowa. "These guys were the very definition of a team."

The program has become a perennial winner of the state qualifying competition and has made it to the last two national competitions. The first was in Louisville in 2019 where the Bloodhounds, including Parker Denning, Elton Kruse, AJ. Nolting, and Danes Settles, finished in the top half of all schools without even completing the plumbing project.

This time the squad did some final preparations including having one team member, Andrew Schaefer, get up to speed on plumbing prior to making the event.

"Andrew Schaefer was designated as the plumber and honestly - he drew the short straw," Kobelt said. None of them had plumbing and someone had to do it. He stepped up. There was a little bit of hands on work, but that was a lot of YouTube videos. And he probably had the least amount of practical experience in that discipline, but there he was."

Schaefer said it wasn't overly difficult, but the plans didn't provide a lot of detail.

"That was the first time I had done any soldering and stuff like that, but I watched a couple YouTube videos and I had done a little bit, but not too much of it," Schaefer said.

"Going into it, I was just hoping we would do better than the last team Fort Madison took before."

Schaefer said he's currently trying to line up a job after high school, but wants to go into trades and doesn't plan on attending college.

Kobelt said in 2019 the team just decided to move forward with what they were good at and that included the carpentry, electrical, and masonry. The plumbing wasn't even touched in that build, but the Hounds were so tight in the other portions they scored better than half of the schools there.

"This year it was much more methodical. Watching them that night at the hotel, they went through the math and generated a cut list for half that entire build. Just off paper. And then the first thing they did during the competition was just measuring and cutting board. It looked like we were getting our butts kicked and just making long boards into short board," Kobelt said.

He said all four are really carpenters fundamentally, but this week they were all Cinderella stories in their own right.

"Laying brick is not part of our curriculum so we took Emmett to Marshalltown about two weeks ago and he got an intense two-day training at brick laying in their union hall," Kobelt said.

"That kid had never laid a brick before so it speaks to their ability to adapt to situations and you have to do that in the field. This kid devoured it in two days laying brick eight hours a day."

Kruse's older brother Elton was on the 2019 team and he, too, handled the masonry work on the build.

"He kind of forgot everything," Kruse said. "So he didn't have much to offer, but I learned the basics of how to lay bricks. I was pretty iffy on it, but I knew I could get it done- just not the best quality. It turned out better than I thought which was good for everyone. There were a few things I haven't done before, like stepping out which I handled okay."

Kruse said he was surprised, as were the other members of the team when the saw they had finished second in the nation.

"We watched on a computer in the airport and we were all pretty excited, then we got a dinner off of Clint."

Hayden Wolfe handled the electric work. Wolfe has signed a letter of intent to work for Mohrfeld Electric following high school. Kobelt said during a pregame at the end of the first day, Wolfe told the team he could start at noon and get all the electrical done.

"I tried to talk him out of it," Kobelt said with a laugh. "But he knew his skills and abilities and he's a very solid guy. When he got into his spot, he flipped a switch and said, 'Don't talk to me'."

A laid back Wolfe said the electrical work really wasn't that difficult.

"It was a simple thing for the most part. The hardest thing, I think, was getting it to the way they wanted it done. They changed the scope of some of the plans so I had to adjust to those changes, but after that it really was pretty basic," Wolfe said.

Landes Williams, much like his success on the basketball, baseball, and football fields is a flexible option that can handle many different positions for coaches. He applied the same concept to the TeamWorks competition.

"Landes has just turned into the ultimate utility player. The first day they were all carpenters, had to get the building up. But on day two, when everyone got into their own discipline, Landes was basically putting up rafters by himself. And then he just switched from trade to trade and did not lose a step. He probably had the hardest time keeping a rhythm, but it never phased him."

Kobelt said scoring sheets from the competition will be released in the coming days, but he said he thinks it was decided by single digits as Fort Madison was the only team on site, college and high school, to completely finish the project.

He said he thinks the difference may have been in the written part of the competition which included a written plan that was presented to judges, as well as an examination on the team's knowledge of SkillsUSA.

"I can tell you, if I was going to speculate there are two written exams. One is skills-related, which I'm sure they fared well on. The other is about the SkillsUSA - what year they were we founded, official dress code colors, that sort of thing, and we did not study for that at all - we just wanted to build," he said.

Kobelt's responsibility is relegated to observer during the competition hours. But he said moving about, he could see other teams lose focus and engage in some in-fighting when things went south, but he said that never once happened with the Bloodhounds.

He said the Wisconsin high school state qualifier won the event and the two schools have agreed to compare notes once scoring sheets are made available to see how they did compared to each other to prepare for a return trip to the event.

"It was kinda neat. They're always a contender - always a top 10 team and they were good to us in Louisville and showing us some things. So we struck up a friendship there. Both their state and college teams placed this year, so that's a really good resource for us."

Kobelt said the real importance of the competition is the exposure the team gets to high level professional trades people and seeing the importance of soft skills, while at the same time showcasing their trades skills.

"Coming out of industry, I've always tried to instill at a fundamental level, the importance of problem solving, teamwork, communication - what is basically employability. That was always the thing here - to help students transition from school to work, create employable kids," he said.

"You think you're doing it right, and then you step on that stage and see how those folks do it. I was already making concessions in my mind because these are high school kids. At the national level you get no special favors for being 17. They put the same pressures on them that industry professionals do."

He said he had no doubt his students would rise to the challenge in front of them and said setting the bar at what is acceptable for high school is a disservice to students in the program that want or need to enter into a trade program after high school.

"That's been a shift for me. I know my students without fail will rise to the challenge. They will meet the expectation. And if my expectation is higher, then that's really good for a high school student. Setting a bar that's just good enough for high school is the wrong way because then that's the level they will get. Set the bar higher and you get more out of them," Kobelt said.

"The program here at FMHS has allowed us to develop those quantifiable skills for a grade and that wasn't the case before Greg Smith got this program up and running."