Games look the same, but they're still different 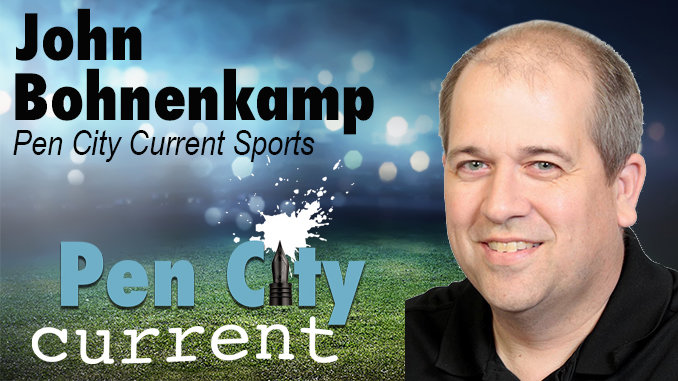 Melrose Avenue is one of the main arteries into the area around Iowa’s Kinnick Stadium.
For seven home football games each season, it’s a street gridlocked with cars and fans.
For every other day of the year, as the road winds through University Heights, it’s a notorious speed trap.
Go one mile per hour over the 25 mph speed limit, and you’re probably going to get a ticket, the joke goes.
My usual routine in covering a game at Kinnick is take the back way into the parking ramp on the northeast side of the stadium. I arrive early, leave late, and always avoid Melrose.
This season, for the three games I covered, I drove down Melrose two hours before the game, breezing through the empty street, pulling into the parking lot on the west side of the stadium.
I was one of the people who were allowed into the stadium this season because of the COVID-19 pandemic.
Media access was limited — social distancing was the norm in the press box. Post-game interviews were conducted by a Zoom video conference.
Get in, get your work done, go home. And always wear a mask.
If you looked through your binoculars, you would see a normal Saturday afternoon college football game. Once you put the binoculars down, you saw a stadium almost completely empty of fans — the only people allowed into the grandstand area to watch the game were family members of the players.
The last game I covered, pre-pandemic, was on March 8, when Iowa played Illinois in men’s basketball.
The State Farm Center in Champaign was sold out that night, even though the COVID-19 virus threat was real.
At one point, another writer leaned over and said to me, “Someday we’ll tell someone we covered a game in the middle of a plague.”
He wasn’t joking.
Four days later, we were being told to leave the arena in Indianapolis, because the Big Ten Tournament had been canceled.
It took more than four months before I covered another sporting event. The routine is different now, but the games are the same.
It’s oddly comforting to watch a live event, even if you have to be conscious about distancing, and wearing a mask. Attendance is severely limited, whether it’s high school or college. But what happens on the field and on the court looks the same.
The attitudes are different, too.
On that night in Champaign, after Illinois defeated Iowa, Illini players circled the court area, high-fiving fellow students. It was a fun scene.
Seven months later, students at Notre Dame, most of whom were wearing masks, stormed the field to celebrate a win over Clemson, and there were many on social media who recoiled in horror at the sight.
Players and coaches no longer shake hands after games. In high school, it’s a quick wave goodbye.
There is always concern that a positive test will bring a pause, or maybe an end, to a season. The common answer, when I would ask high school athletic directors how they were doing, was usually a sigh and a, “Well, at least we’re playing.”
Iowa has crowned high school champions in the summer and fall seasons, and is a month into its winter season. In Illinois, there hasn’t been a high school event since March, and it doesn’t seem like there will be one any time soon.
There is a tenseness that won’t go away, even as we head into 2021. We hope the vaccine works. We hope for normalcy. We hope, until then, we don’t catch the virus, and that our loved ones are just as fortunate.
Viewed through a narrow lens, the games look the same. The bigger picture is much different.
I had to laugh, though, on that first drive down Melrose this football season.
There’s a sign as you head into University Heights now that tells you your speed. I was going 26 mph when I reached the 25 zone.
“SLOW DOWN,” the lights screamed at me.
Even in a pandemic, some things never change.
John Bohnenkamp is an award-winning sports writer and contributor to Pen City Current