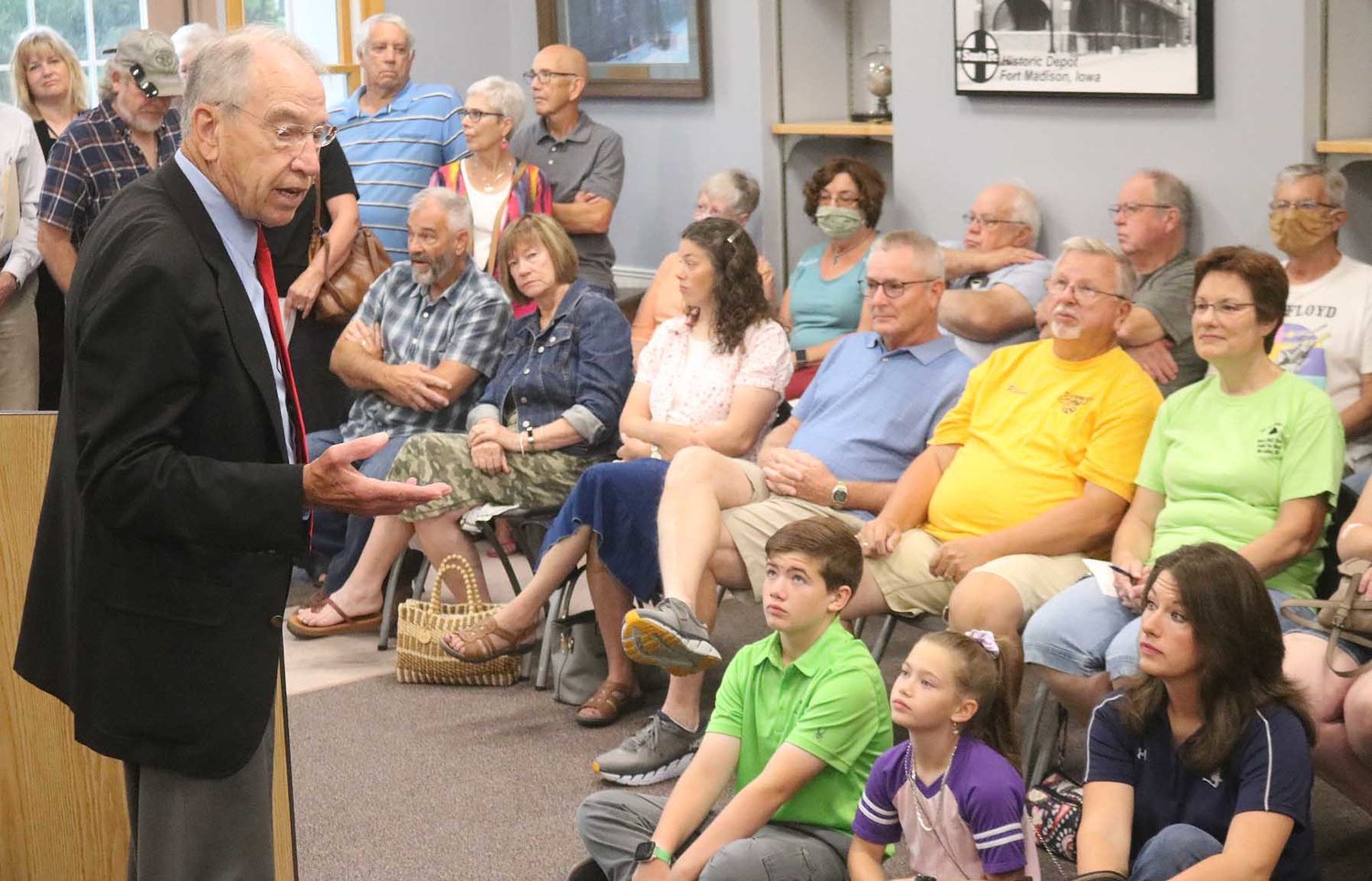 FORT MADISON - The emotion of the political climate was on full display Wednesday morning as U.S. Sen. Charles Grassley took shots from the left and right at Fort Madison City Hall.

The 40-year senator opened his conversation about his support for the $1 trillion infrastructure bill that passed through the U.S. Senate earlier this month.

He said he opposed the $3.5 trillion budget that passed the House, that has been tied to the infrastructure bill.

"That money sets up a whole new bunch of programs that go one day to day and year after year. Whereas you build a highway that's good for 40 years before you tear it up and lay it down again," Grassley said.

He said Iowa is worst in the country in bridge rating and that's the reason he voted for the $1.2 trillion for infrastructure.

President Donald Trump had submitted a $2 trillion infrastructure bill that didn't gain any traction in the legislation, but Grassley said during that process he heard from Iowans who said rural Iowa needs improved transportation.

He said President Biden wants to couple the $1 trillion and $3.5 trillion so he can have popularity of getting new bridges and getting all the other infrastructure included, some with heavy disagreement, including $65 billion across the country to expand high speed Internet access.

Fort Madison business and property owner Doug Abolt highlighted that disagreement with the bill in his comments to Grassley.

Abolt said he's been regularly voting for Grassley but is upset with the senior senator from Iowa in supporting the infrastructure bill as well as his support for federal regulations around the COVID pandemic.

"We're angry. We're angry about the shape of our nation. We're angry with what you're doing to our grandchildren with all this money. We want you to cut spending. The infrastructure will take care of itself. We don't want anything to do with global warming until the rest of the world takes care of their stuff and that's a nice way to put it."

Abolt also said if the Internet is going to expand it should be on the back of private investment.

"if somebody wants to work on our Internet it should be private people working on private things. And that's what makes this country great. Not the government giving us stuff that's our money anyways," he said.

"We're tired of pandering to the left and what they're trying to do to destroy this country."

A member of the audience told Abolt he wasn't speaking for the whole room, to which Abolt said he wasn't trying to.

One question focused on why Grassley didn't vote for an investigation into the Jan. 6 raid on the U.S. Capitol.

"Because the Senate rules committee, a second committee - the homeland security committee was going to issue reports in June so why duplicate it. They had all sorts of recommendations that I hope will be carried out," Grassley said.

He was pushed about how Republicans held commissions on Benghazi, "and everything under the sun" but seemed reluctant to do what they did on everything else in regards to the raid on the Capitol.

Other issues addressed were the difference in stance Grassley took when voting to approve Supreme Court justices quickly in the final months under President Trump, but dragges his feet in appointments under the Obama Administration, with one member of the audience saying Grassley was flip-flopping.

Grassley said things are "done differently" when the party controlling the Senate is the same party in the White House as opposed to different parties.

Several comments focused on the 2020 election and the theories that machines and the Internet were used to change votes.

"After hearing everything today, I think the only way to get credibility in elections is to go back to paper ballots," he said to applause.

On immigration, Grassley said he visited the border three months ago. he said a border patrol told him they were asked to brief the the president's team before he was sworn in.

"They said just leave things as they are or you're going to have a crisis. The first day he stopped building the fence and invited people into the country so we have an open border basically,

He said the Supreme Court took action yesterday to allow border patrols to keep immigrants outside the country on the Mexican side of the river and process them in an orderly manner for refugee status.

"That's the Supreme Court stepping in saying what he did when he took office on Jan. 20, he didn't have authority to do that."

Grassley was also set to hold a meeting in Burlington.