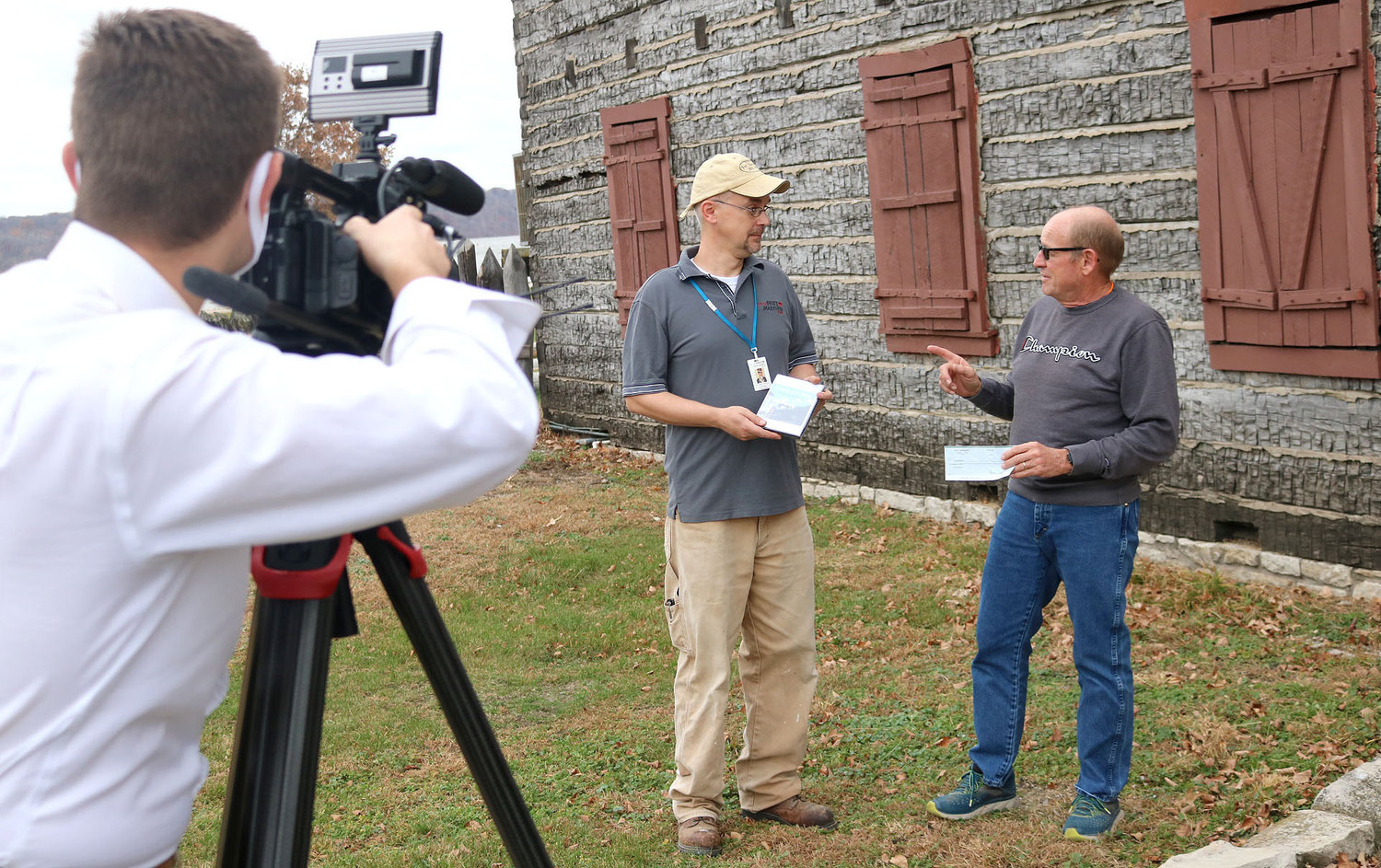 FORT MADISON - A local historian has reached back in time to chronicle the building, razing, rebuilding, disassembling and reconstruction of the fort that ultimately became the namesake of Fort Madison.

Michael Killoren spent the last three years researching and producing the 32 minute video called "The Building of Fort Madison - The First Fort on the Upper Mississippi."

The video is being sold at the Old Fort for $9.95 with all proceeds going to the Old Fort.

Killoren grew up in Fort Madison and never saw a fort here and always had a curiosity of that anomaly considering the city's name.

"When the opportunity presented itself, I took it on." Killoren said Monday during a press event commemorating the first official sale of a video to Fort Madison Mayor Matt Mohrfeld at the Fort.

"I didn't realize how big it would be. We left out a lot, but for me it was very personal in getting to know the people who are responsible for it."

Killoren takes viewers on quick historical tour of the Fort's beginning and relatively short life. The Fort was originally called a Factory, because it was a place where governmental officers called Factors would trade for needed goods.

Old Fort Director Dr. Eugene Watkins provides narratives, along with other notable Fort Madison figures as historical records and logs are read into the account.

After a short run of just over a decade, the fort ran into supply issues, most notably food stuffs began to rot and had to be disposed of and fort leaders decided to burn the fort in 1813 and fled the area by boat.

Killoren then takes the documentary to Iowa State Penitentiary where four inmates, which later grew to close to 50 inmates, began a project with the help of Paul Hedgepeth and the Old Fort Commission, to rebuild the fort on the grounds of the John Bennett Center.

Killoren said he was on an inspection team that did a 12-hour tour of the prison and saw the inmates working on the fort.

"I was on an in-house inspection team when Crispus Nix was warden. We went through on a tour and we were up there 12 hours and went through the Bennett center where those guys were swinging those axes. I kept a great distance" Killoren said with a laugh.

Killoren said Watkins stumbled on some raw film of the work being done and had it digitized for the project.

"When Eugene found that film, we didn't know what was on it. I went up to have it converted and I'm standing there watching and thinking, "You gotta be kidding me - beautiful footage."

Then Killoren came across a 1985 140-second newscast from WGEM where additional footage was uncovered and interviews with Hedgepeth and the original four inmates and historian John Hansman.

After the work was done in the grounds, the fort buildings were assembled in the prison parking lot, then disassembled and moved to their current location.

"Bernie was very emotional about it when they dug up that parking lot at Sheaffer Pen."

The video can be purchased at the Old Fort gift shop during regular Fort hours. The fort is closed from November to April.

Mohrfeld said the city is looking a relaunching the Old Fort Commission with direction to make the historical representation fiscally sustainable. The commission was integral in getting the Fort built and opened in 1988.