Hounds advance to substate final with win over Clippers 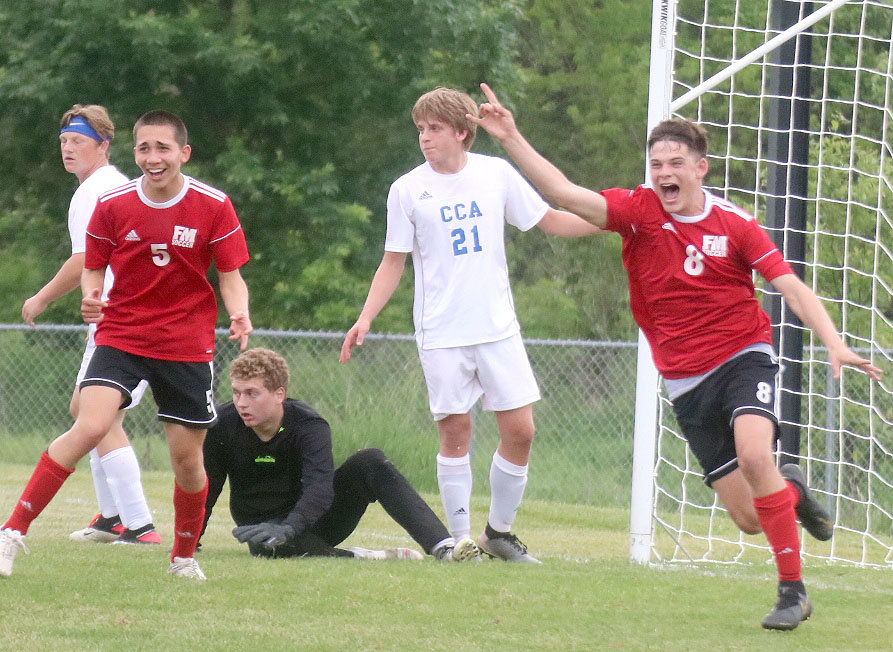 Fort Madison's Will Larson celebrates after scoring on a header off a corner kick assist from Mitchell Pothitakis in Monday's 5-1 win over Clear Creek-Amana in Class 2A substate 5 semifinal action. Photo by Chuck Vandenberg/PCC
Posted Tuesday, May 25, 2021 6:00 am

Fort Madison will play No. 4 Pella on the road Wednesday with state tourney on the line

Those were the words from Fort Madison Head boys soccer coach Kevin Wellman after Fort Madison eliminated No. 13 Clear Creek-Amana on Monday night 5-1 in the Class 2A Substate semifinals.

Fort Madison, currently ranked No. 9 in Class 2A will take on No. 4-ranked and Substate 5's top-seeded Pella in Pella on Wednesday at 6:30 p.m.

Wellman said the game plan was to press the Clippers early and often and force the game at the outset.

"We watched film on Clear-Creek Amana and couple things we identified was they played goal kick short so part of our game plan was to press them high. Our game plan from the kickoff was to press right away and go right at 'em and the boys did that," Wellman said.

The Hounds got on the board first when Xander Wellman scored moving the defense to the right of center and then slashing a shot across the front of the goal to the left that found the back corner for a 1-0 lead just 6:20 into the first period.

The Clippers would take the center ball and go right up the field, but keeper Reiburn Turnbull made a jump save on a shot from about 20 feet at the 7:02 mark.

The Hounds got the most exciting goal of the night when Mitchell Pothitakis sent a corner kick from the northeast corner of the pitch at the Baxter Sports Complex, high in front of the net and senior Will Larson caught a header into the back center with the CC-A goalie coming out to make a play on the corner kick assist.

Wellman would give Fort Madison a 3-0 lead with 6 minutes left in the first half on a couple nifty balls from Anthony Barnes and Pothitakis. Leif Boeding would make it 4-0 just before halftime with assists from Jacob and Mitchell Pothitakis.

Kevin Wellman said he's been challenging the Hounds to strike fast after halftime in the past three game and they've responded with goals in the first 90 seconds each time.

This time Xander Wellman got a ball from Will Gager and popped it past the Clippers' goalie again with just 51 seconds gone in the 2nd period.

"At halftime against Keokuk, I challenged them to press really hard and go get one and they did. Keokuk was 60 seconds. Tonight I told them 90 seconds and they did it in 51," Wellman said.

Xander Wellman said the Hounds knew the Clippers were a good team and a fast team.

"We knew they were good. We've played tough teams before and we knew if we played our game we didn't have to worry. We know there are good teams out there and we've played good competition. But when we play 100% we're a great team as well," he said.

Coach Wellman said they didn't know what to expect from the Clippers.

"It's so hard to tell things when you're watching from a screen up in the stands. But I was pleasantly pleased with how it turned out," he said.

Pella comes into the match with a 14-4 record, but ranked 4th in the state in Class 2A.

Xander Wellman said they don't know much about the Dutch, but they do know a lot about themselves.

"We don't know a lot about them, but we're not focused on them. We're focused on us playing our game," he said.

"People see the scores and everything, but they don't see the practices and everything we put into it. We've got parents letting us come over for team meals and bonding. We are a family, you know, not just a soccer team."

The Hounds are 16-1 on the year with the only loss coming to Class 1A top-ranked Burlington Notre Dame to open the year.

Wellman said that was a learning experience.

'Honestly I just use it like a loss. It shows we're not perfect. So all we gotta do is keep pushing through and finish the season as best as we can.