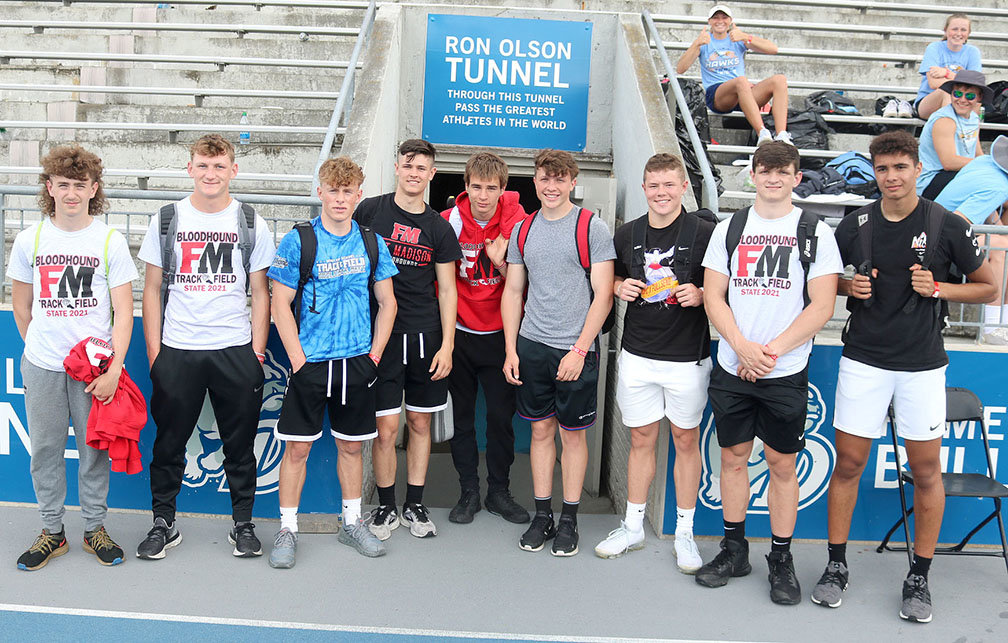 The Fort Madison boys' contingency to the IHSAA/IGHSAU Co-Ed High School Track and Field Championships posed after wrapping up their events Friday. Photo by Chuck Vandenberg/PCC
Posted Saturday, May 22, 2021 2:41 pm

But none of them are going home dejected, either.

The day started with Mikey DiPrima and Jakob McGowan in the Class 3A long jump. McGowan jumped in the first flight and cleared 21 feet, his best jump of the year, but stepped on the orange board for a fault nullifying the jump that would have qualified him for the finals. His best qualifying jump of the day was a 20-0.25" which placed him 9th overall.

The final leap of the preliminaries from eventual champion Ian Collins of Charles City went 22-9.25" knocking McGowan out of the finals.

DiPrima had two jumps of just over 19 feet on this first two attempts in the second flight, but fouled on his last jump which also appeared to clear 21 feet.

"I think it's just a different environment," McGowan said of his first state appearance. "All these different people up here. My first jump I scratched they said was 21-2"

The Hounds then ran in the 4x200 relay. McGowan, who was still waiting to see if he qualified for the finals in the long jump ran the second leg of the relay. The Hounds came in seeded 11th with a district time of 1:31.97, but slowed by a 1.5 seconds for a 1:33.48 giving them the 20th fastest time in Class 3A.

Central Lee's Abby Wellman took to the track in the girls Class 2A 400 hurdles in lane 7. Wellman who was in the middle of the pack down the stretch caught the last hurdle and tumbled, but got up to finish at 1:11.65. The senior suffered the same fate at her district meet, but was still fast enough to qualify for this weekend's meet.

Fort Madison junior Raquel Schneider also ran the 400 hurdles in Class 3A and broke the line at 1:12.41 for the 22nd best time at the meet.

The boys 4x400 team ran in the last event of the morning session and the second to the last race of the session.

The 4x400 was run in the real first bit of sunshine of the day turning things a bit muggy. The Hounds had the lead or a share of the lead going into the final exchange, where North Polk Alleman and Humboldt were able to overtake what was a neck-and-neck race with Andrew Schaefer and Humboldt's Quinton Orr down the stretch. Schaefer had the fastest split for the Hounds with a 51.75.

Junior Dayton Davis took the hand off just as Humboldt and North Polk were extending the exchange and couldn't catch up. North Polk and Humboldt both qualified for Saturday's finals as North Polk's JD Elefson ran a 49.70 split, the fastest in 3A. The Hounds ended up finishing third in the heat and 12th overall with a 3:30.44.

Califf said the warmer weather helped him to a 51.89 on the first leg.

"You're body is warmer and not cold and tight so you feel faster," Califf said. "It just feels great to see all the hard work pay off finally. We've been at this for four years now and we finally got here. So it's nice."

Senior Garrett Hannum ran the second leg for Fort Madison and said it would have been nice to qualify for the finals, but the Hounds had a great year and running at state was a reward of it's own.

"As far as just being able to get up here and run you know- everybody was just ecstatic. And it's not just the running, you come enjoy the environment and get to hang out with your buddies for a few days. It's just a good time," Hannum said.

The Hounds went into the final event seeded in the top 8. Schaefer said he was happy to see a drier track, but said it didn't really make a difference. Their goal was to just run as hard as they could.

"You're more confident on a dry track, but there really isn't much different. We're used to running the rain and we run practices in the rain so it doesn't effect us much. We just tried to run as hard as we could."

Co-Coach Chad Hannum said running earlier in the day was different for the Hounds, but also attributed the difference to the heightened atmosphere. The Hounds dropped about a second or two from qualifying times in each event over the weekend.

Co-Coach Mike Schneider said the Bloodhounds accomplished what they could.

"We did what we could. The kids ran really well. That was a good time for us in the 4x400, it's just tough up here," Schneider said. Our kids did well."