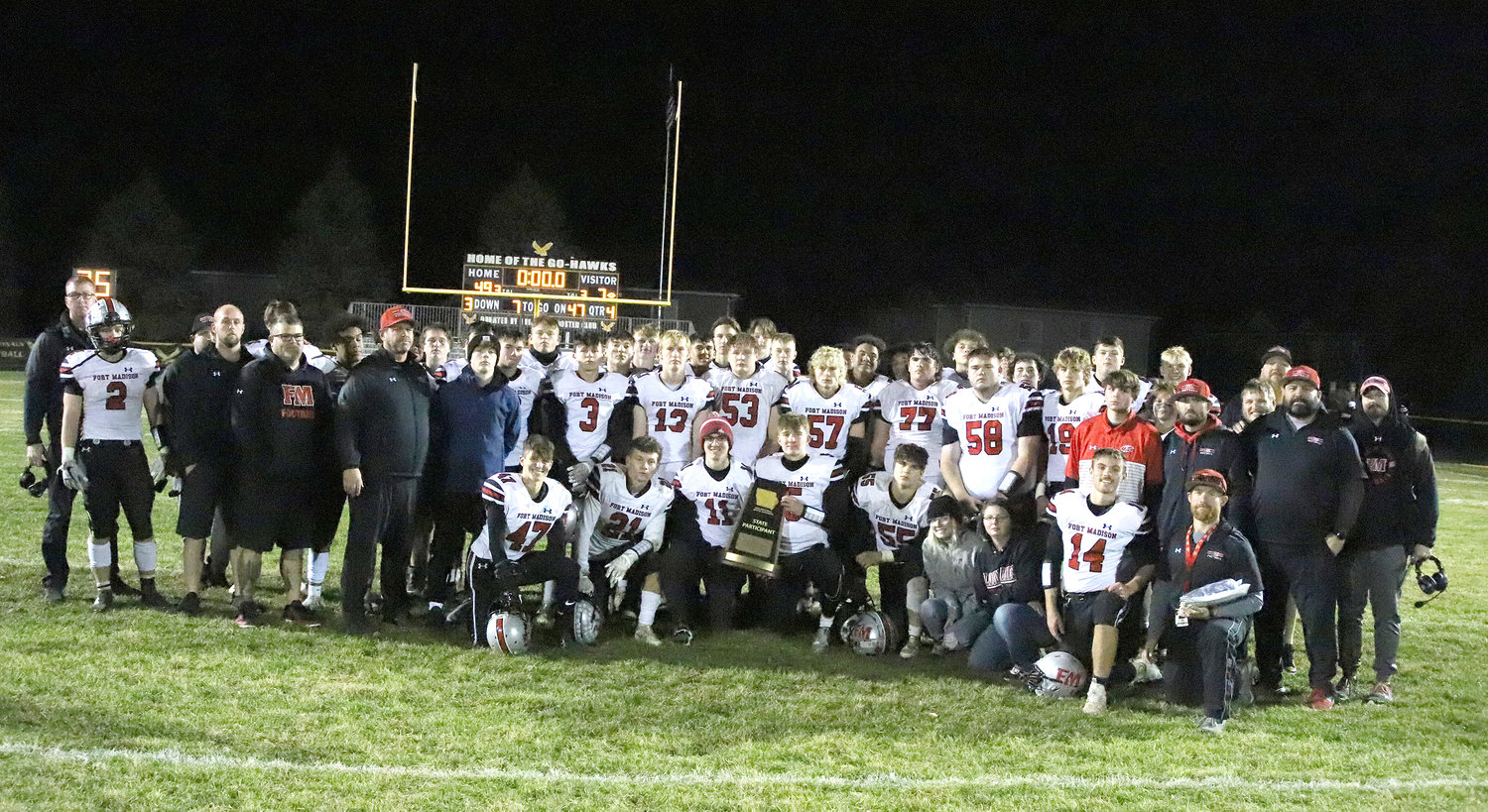 The 2022 Bloodhound football team wraps its season in a playoff banner after finishing 7-3 with an opening round loss to Waverly-Shell Rock in Class 4A Pod B.
Photo by Chuck Vandenbeg/PCC 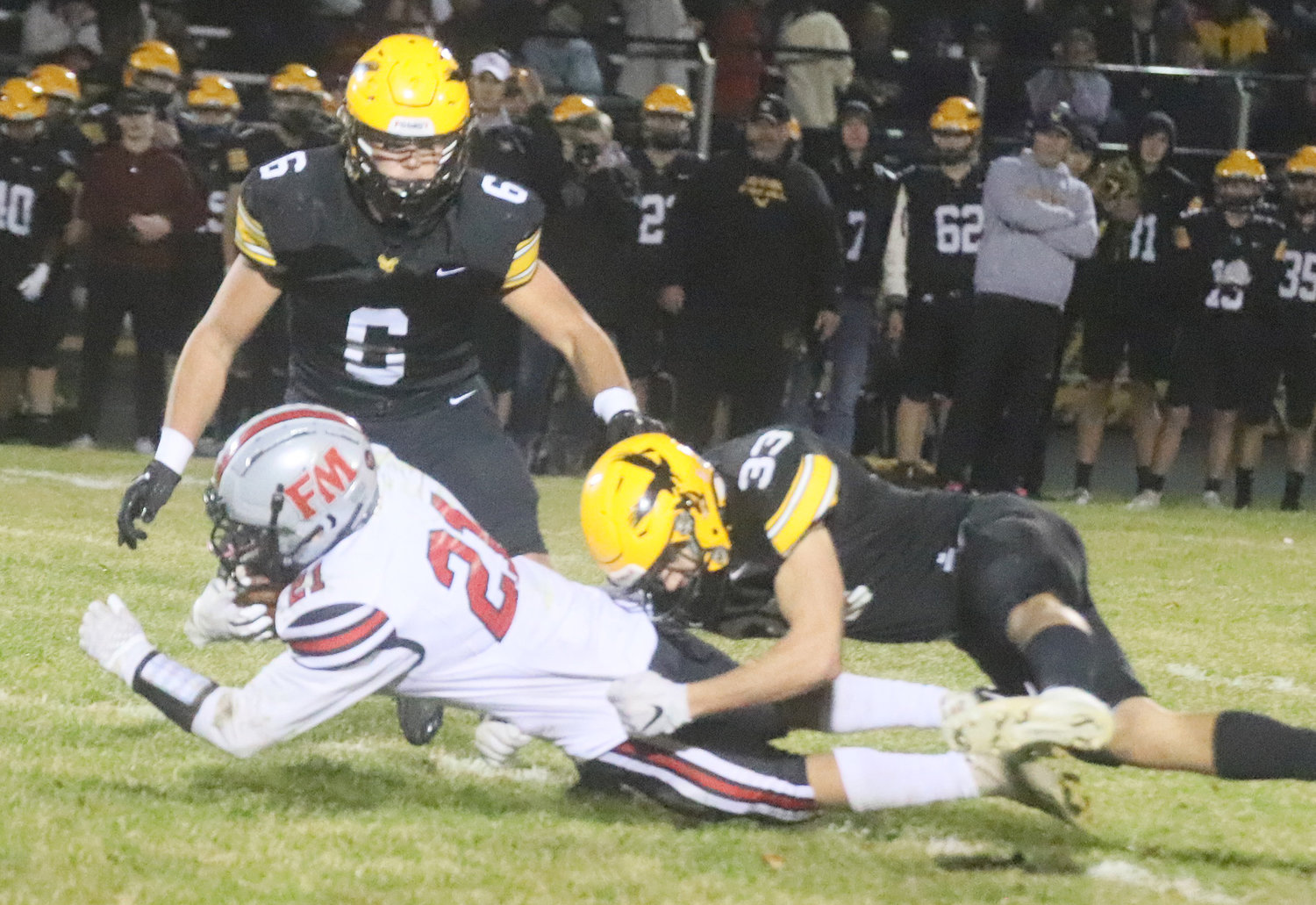 The Hounds' Kane Williams stretches for extra yards after a 16-yard reception in the third quarter Friday night in Waverly.
Photo by Chuck Vandenbeg/PCC 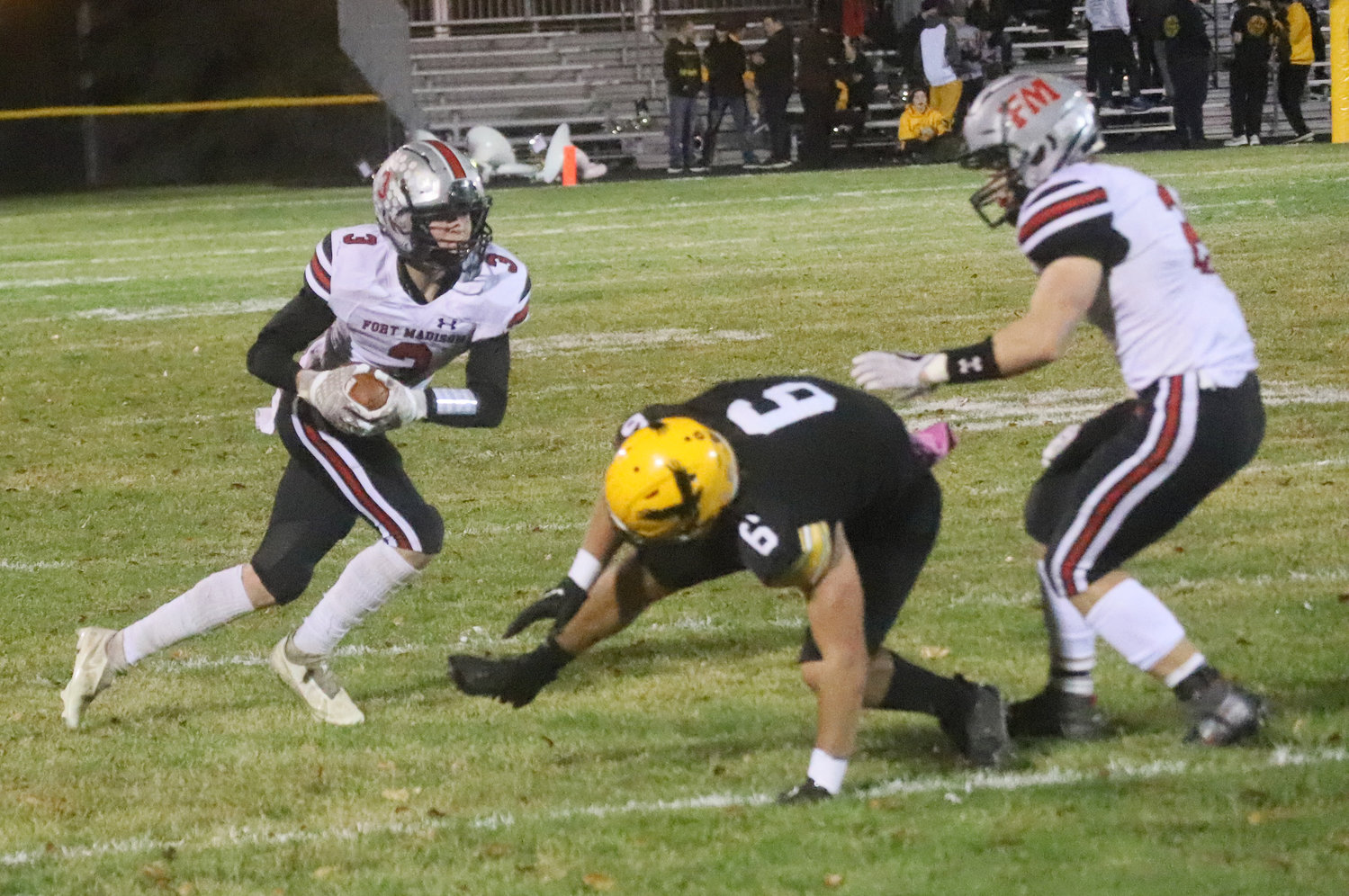 Fort Madison's Henry Wiseman takes a bubble screen and gets help on a downfield block on a 13-yard pass play in the second quarter.
Photo by Chuck Vandenbeg/PCC 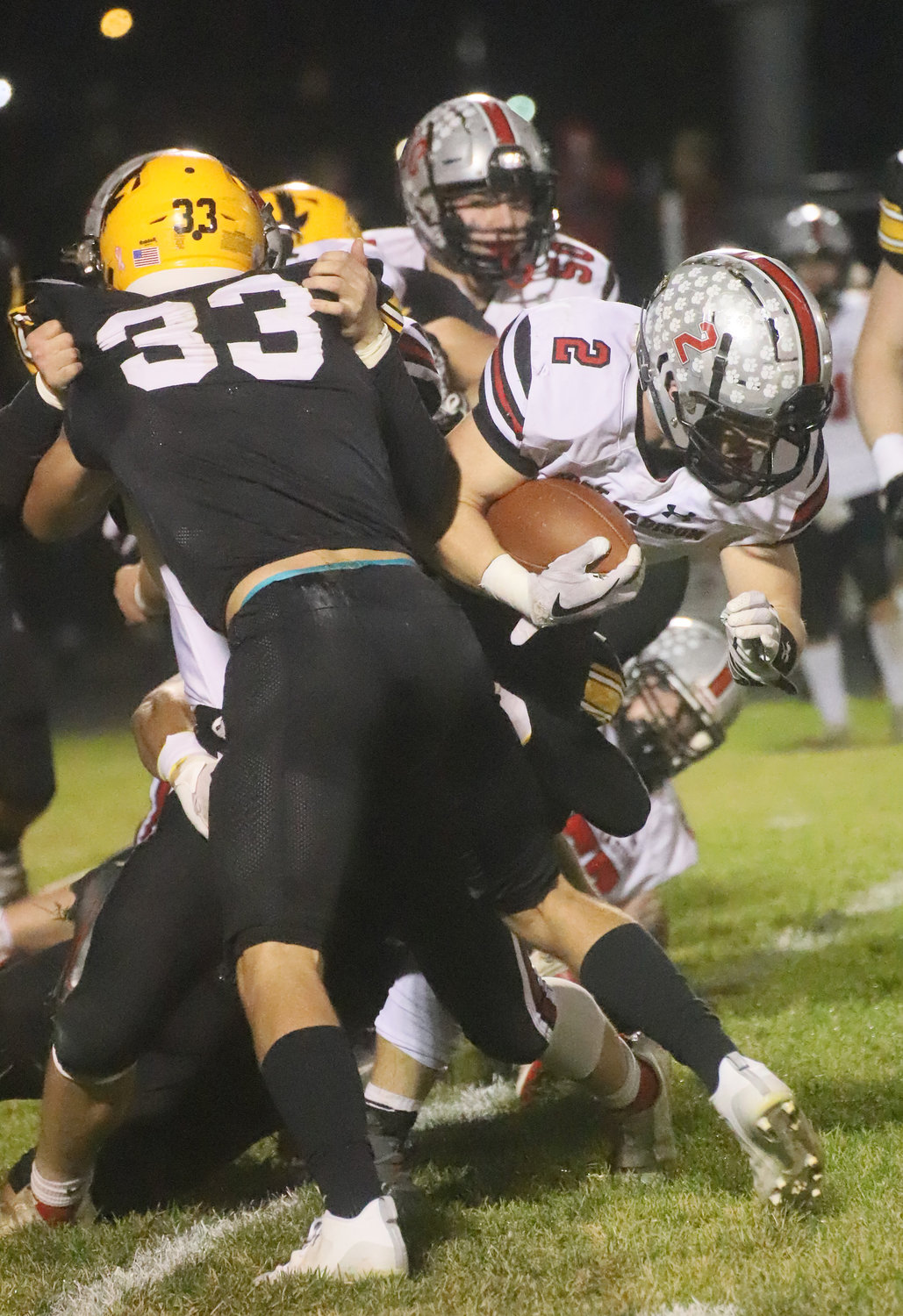 Teague Smith gets a couple of his hard-earned 51 yards in the second quarter of Friday's 49-7 loss to Waverly-Shell Rock.
Photo by Chuck Vandenbeg/PCC 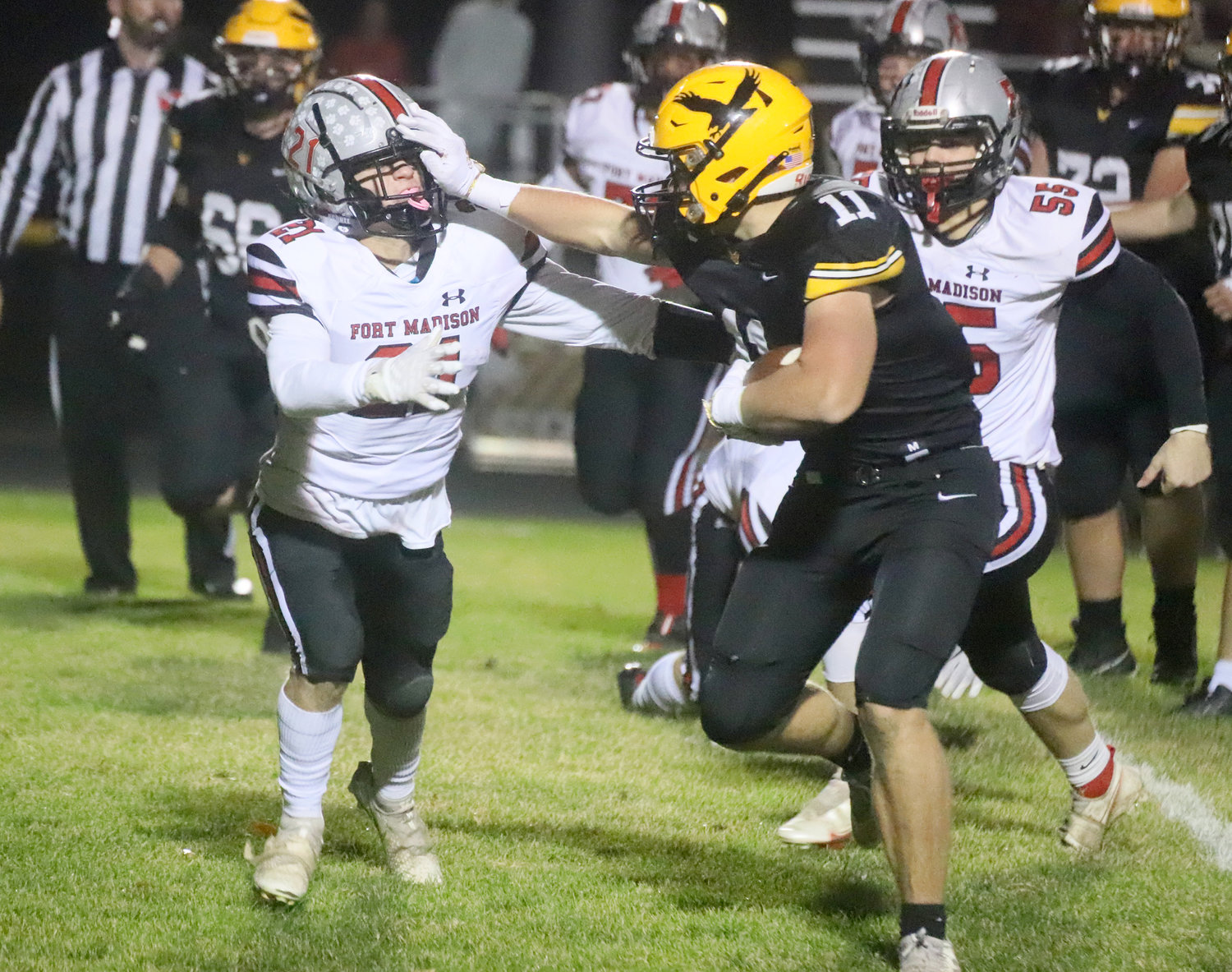 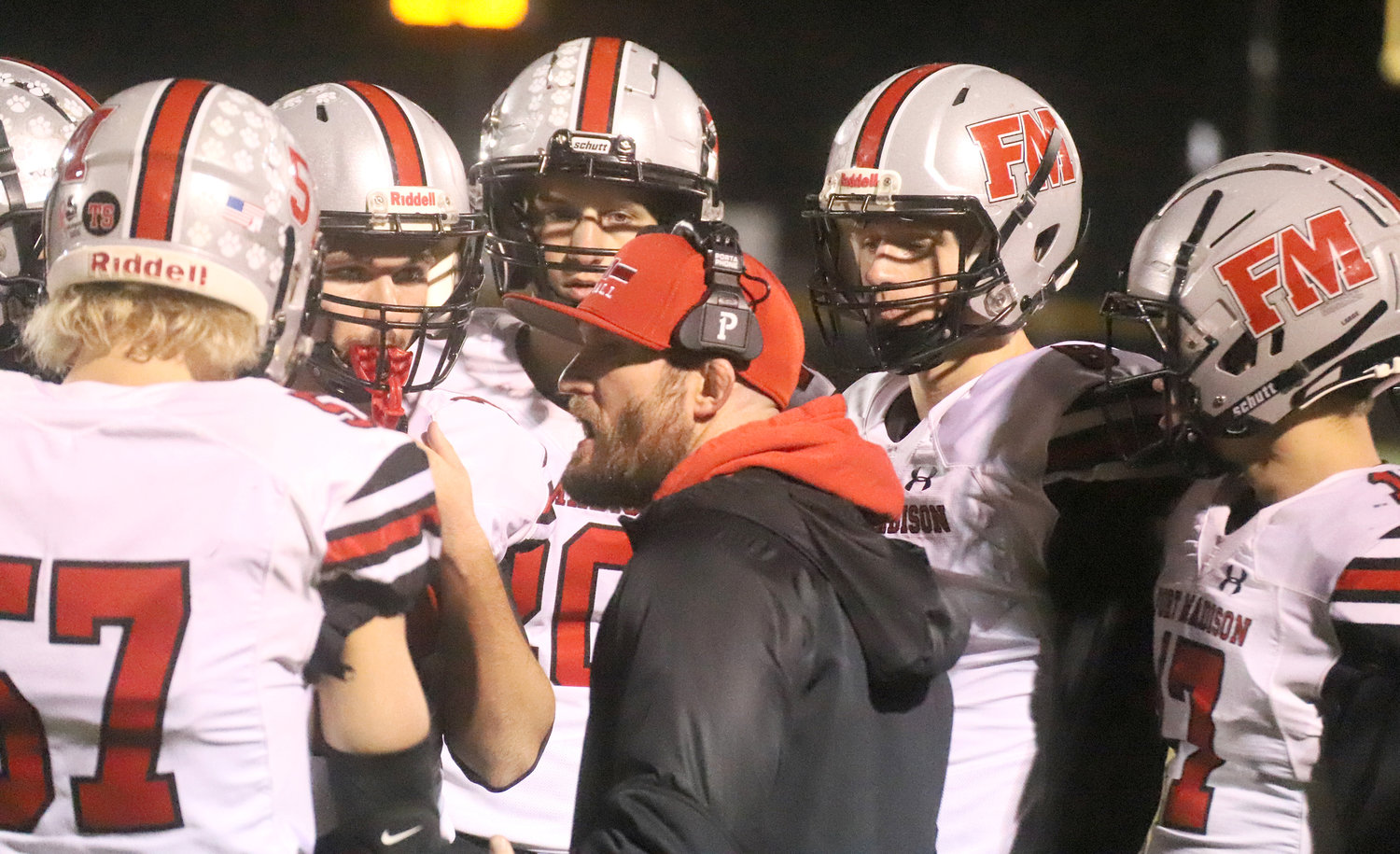 Head Coach Derek Doherty talks with the Hounds prior to the kick off Friday night of the Class 4A Pod B opening round playoff game against Waverly-Shell Rock.
Photo by Chuck Vandenbeg/PCC
Previous Next
Posted Friday, October 28, 2022 11:10 pm

We didn't concede. It didn't go the way we wanted it to, but I'm extremely proud of how far our guys have come, but then you look at how far we have to go if we really want to get where we say we want to go.”
Derek Doherty, FMHS Head football coach
Chuck Vandenberg, Pen City Current Editor

WAVERLY - It's been 33 years since the Fort Madison football team got to a state-recognized playoff game.

And the first one in more than three decades didn't go the way the Hounds or Head Coach Derek Doherty had imagined.

The Class 4A No. 2 Waverly-Shell Rock Go-Hawks bullied Fort Madison to a 49-7 loss that ended the Hounds' season at 7-3.

Doherty said the Go-Hawks were the most physical team he's seen in a while and Fort Madison just couldn't catch up.

"We came here to win. They were who we thought they were. We knew they would be physical and they would be fast. They aren't getting all the praise for nothing," he said.

"We didn't concede. It didn't go the way we wanted it to, but I'm extremely proud of how far our guys have come. But then you look at how far we have to go if we really want to get where we say we want to go."

The Go-Hawks' Tyler Gayer took the first play from scrimmage 50 yards left off tackle to the Fort Madison 22. He got the call again on the next play for 14 yards and then McCrae Hagarty bulled his way through the Hounds' line for an eight-yard TD.

Fort Madison would start at their own 20 and go four and out and then Waverly-Shell Rock's Asa Newsome took it 50 yards on the first play after the punt for another score and a quick 14-0 lead.

The Hounds would be taken down on four plays and the Go-Hawks went to work again going five plays with Gayer scoring from four yards out for a quick 21-0 lead with 5:42 still left in the first quarter.

After another four and out on the Hounds' next series, the Go-Hawks' Benny Ramker misshandled Aidan Boyer's punt at the Waverly-Shell Rock 47 and the Hounds recovered.

But Boyer would throw a pick three plays later on 3rd and 6 to kill the momentum.

Boyer punted again, but it went off his foot and out at the Fort Madison 14. Simon Ott would take a reverse hand-off and slide into the endzone for a 28-0 lead two plays later.

The Go-Hawks would score again before the end of the first half to make it 35-0 on a Hagarty 6-yard touchdown.

Neither team would score in the third quarter and Fort Madison would finally get on the board when Aidan Boyer scored from 5 yards out down 42-0 in the fourth.

The Go-Hawks would get their final points when Gavin Stockdale would bring the ensuing kick off back to the Hounds' 27 and then Ethan Bibler would take the next snap the rest of the way for the final TD of the night.

"To be honest, I hope the biggest take away for this team is to learn how to play really fast, physical football," Doherty said.

"You gotta give credit to Waverly-Shell Rock. It felt like there were 20 guys out on the field with how they covered ground.

"That's a level of physicality our kids haven't witnessed yet, but it could be a positive for them to understand that's what's out there and that's who you have to play with if you want to make that leap."

Doherty said his seniors were a fantastic group that bought into the system.

"I remember most of them coming as late elementary kids into our program and into the weight room. Phenomenal young men and we couldn't be more proud of them,' he said.

"It sucks when you have to lose seniors but that's the game. They left Fort Madison football in a better place and we're very thankful for them."

Unofficially, Teague Smith led the Hounds with 54 yards on 15 carries. Hayden Segoviano had 17 yards on four carries, but missed the last quarter with a knee injury suffered on a 21-yard carry.