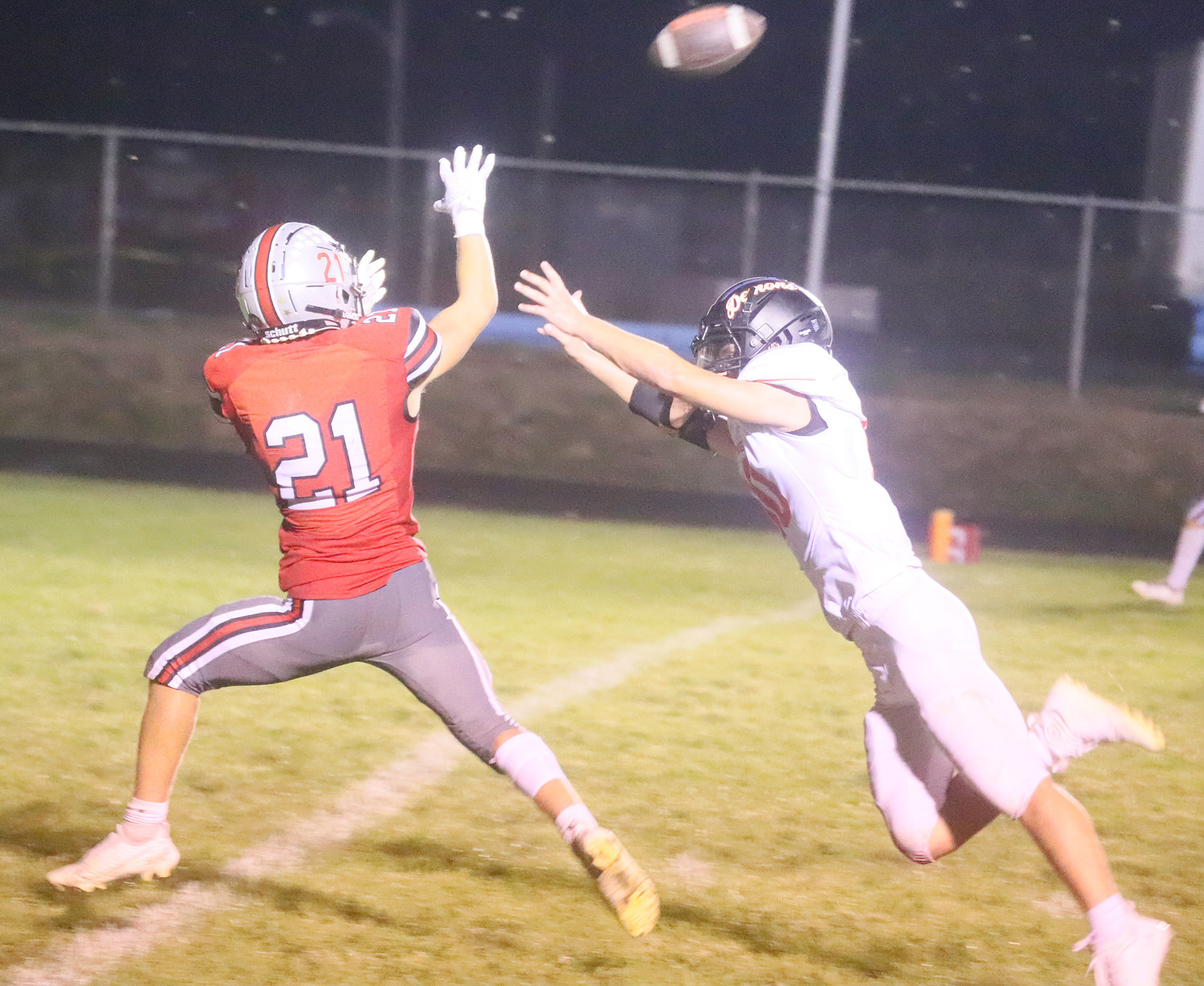 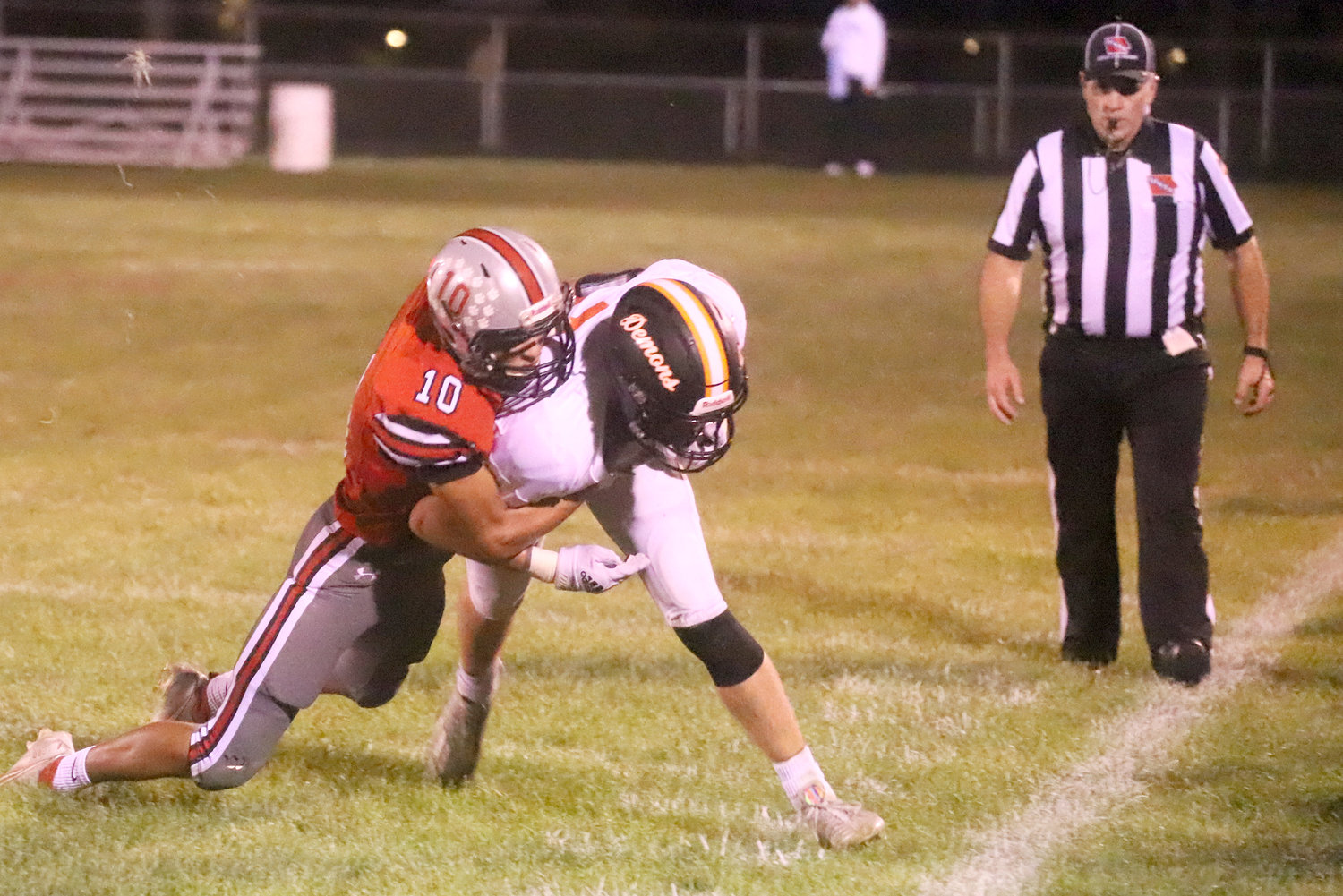 Junior Leif Boeding wraps up a Washington receiver in the third quarter in Fort Madison Friday night. The Hounds won 37-7 and move to 4-0 on the season.
Photo by Chuck Vandenberg/PCC 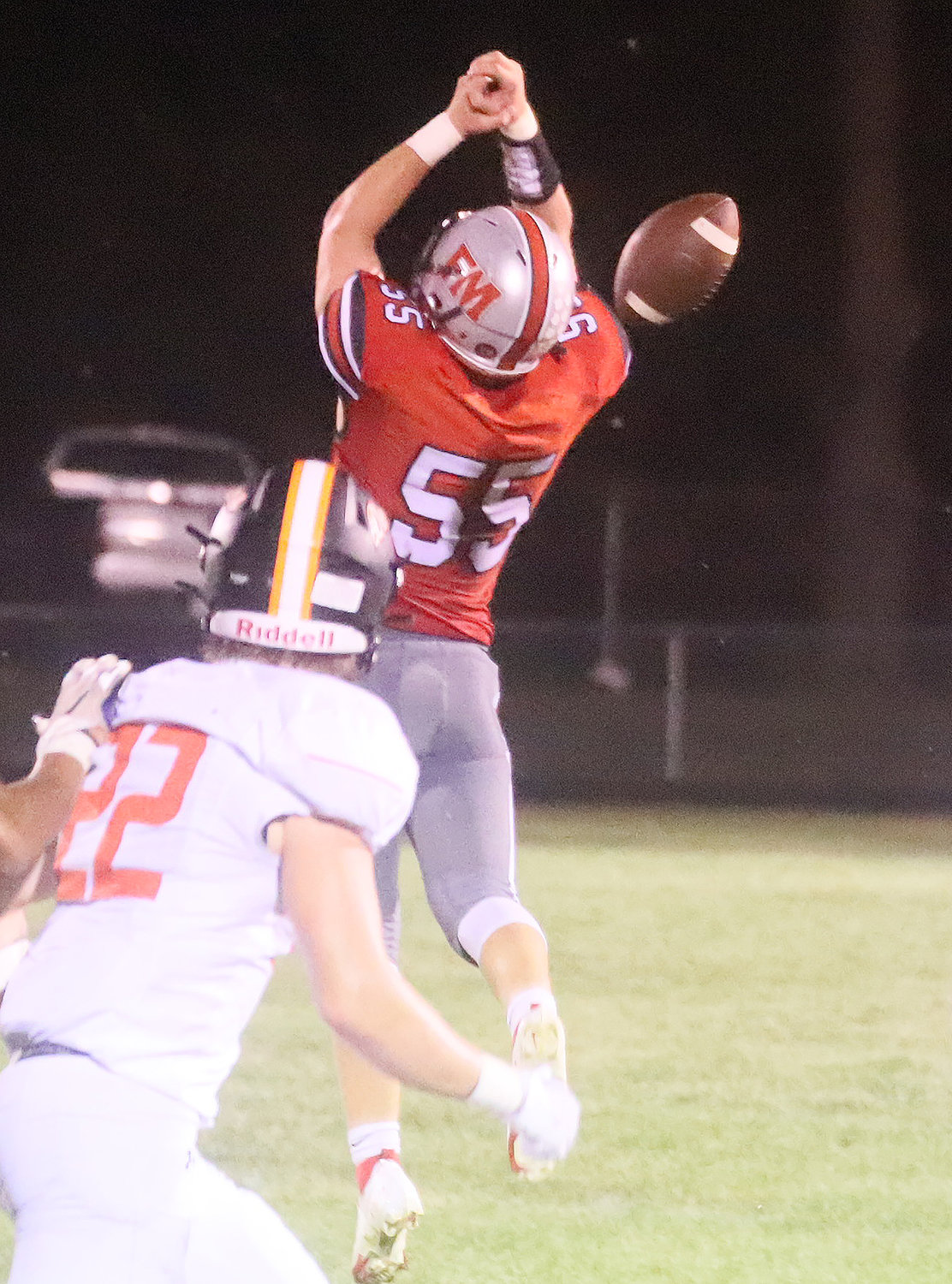 Tanner Settles (55) just misses picking off an Ethan Patterson pass in the first half Friday night. In the second half Settles would knock down a pass that was intercepted by the Hounds.
Photo by Chuck Vandenberg/PCC 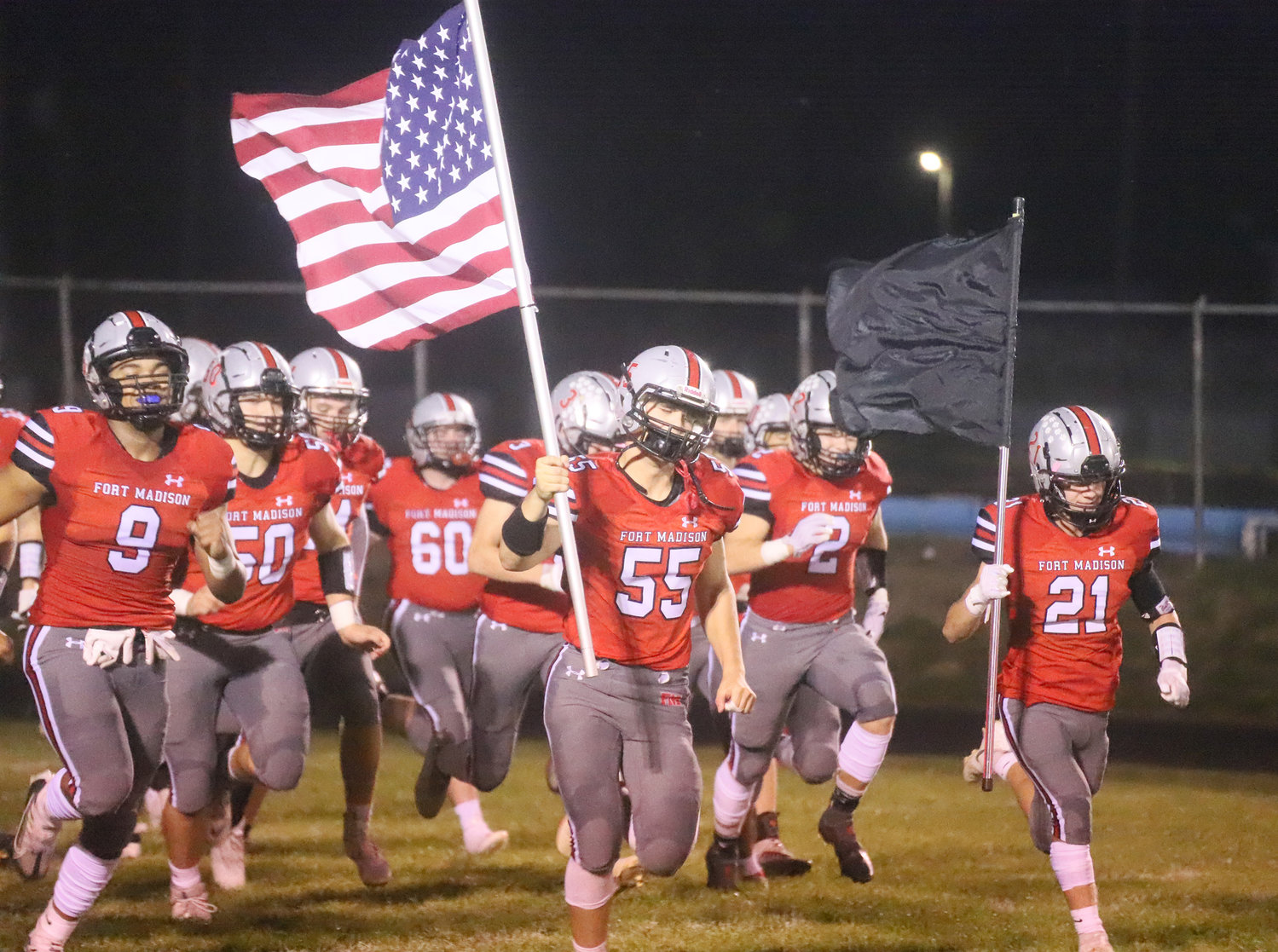 The Fort Madison Bloodhounds bring the American Flag into the stadium as part of the normal routine to start all football games.
Photo by Chuck Vandenberg/PCC 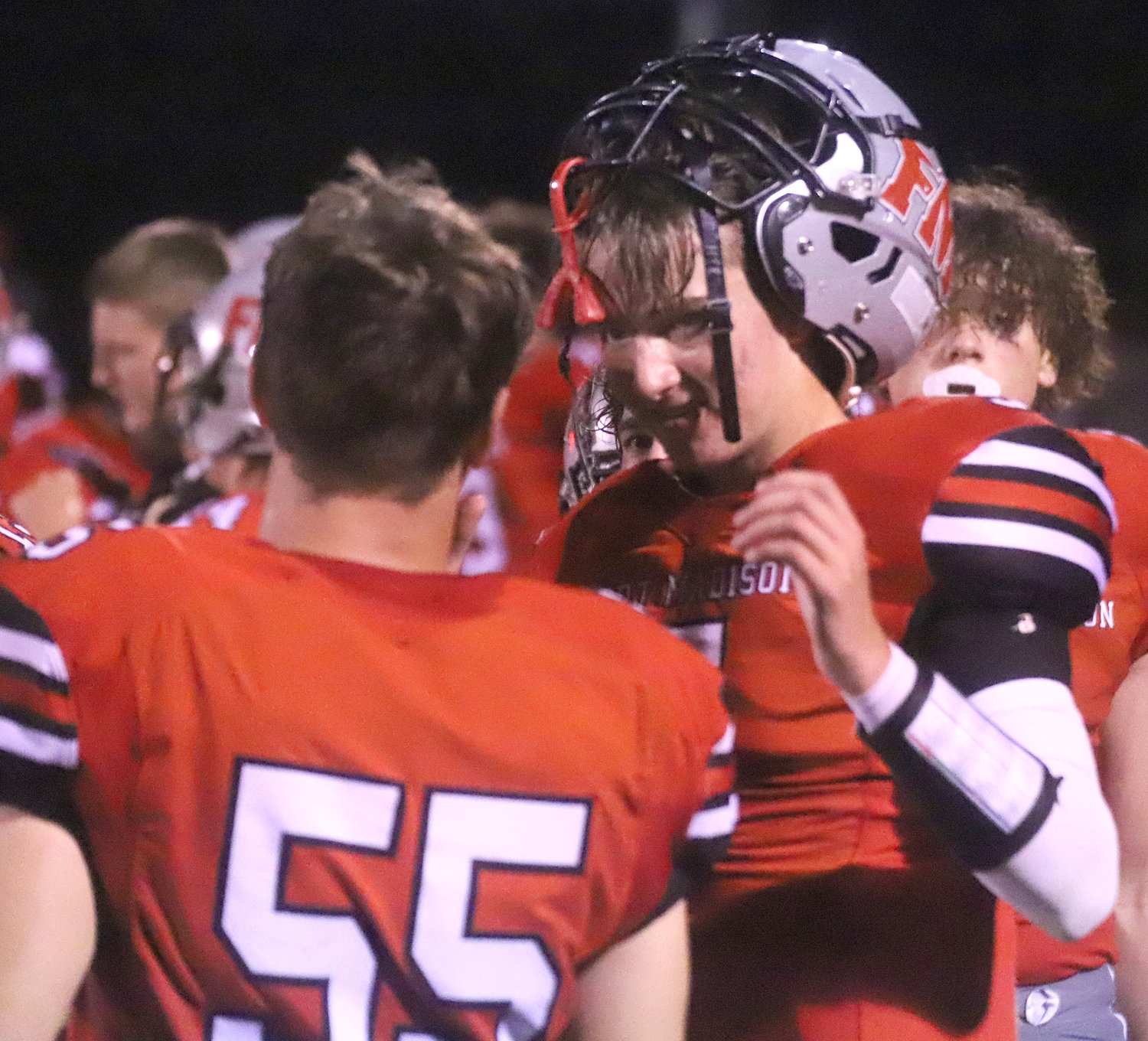 Quarterback Aidan Boyer talks with Tanner Settles during the final minutes of the first half of Friday night's 37-7 win over Washington in Fort Madison.
Photo by Chuck Vandenberg/PCC
Previous Next
Posted Saturday, September 17, 2022 12:17 am

This is real important. A lot of people were doubting us this year with the losses of Landes (Williams) and Tate (Johnson) but we have players to make up for them this year.”
Aidan Boyer, FMHS quarterback
Chuck Vandenberg, Pen City Current Editor

FORT MADISON - After starting the year 3-0 but trailing in every game so far, the Fort Madison Bloodhounds needed a bit of a break.

They got it Friday night, rolling to a 37-7 win over visiting Washington in non-district southeast Iowa football action.

Kane Williams scored three touchdowns all on passes from senior quarterback Aidan Boyer, while the Hounds' defense held the Demons out of the endzone until a touchdown in the final minute ruined the shut out.

Boyer finished the night with his best outing of the year going 23 of 30 for 229 yards and four scores. The other touchdown came from Henry Wiseman who took a pass down the visitors' sideline for 33 yards diving over the goal line as the secondary closed in.

Wiseman's touchdown was the first score of the game on Fort Madison's third play from scrimmage.

Boyer said he's got good rhythm with about four receivers and will also throw out of the backfield. That success has rolled into another successful start to the season.

"This is real important. A lot of people were doubting us this year with the losses of Landes (Williams) and Tate (Johnson), but we have players to make up for them this year," Boyer said.

He said the solid night with Williams is the byproduct of putting in time together.

"We've worked all summer together, in the weight room and after practice. All that has carried over to this."

Boyer said he's looking for single coverages on any of those receivers and isn't afraid to go over the top, despite a steady diet of screen passes when the Demons were using two men to cover three wideouts.

The Demons adjusted in the second half and the Hounds went to work running the ball and then went back outside with the passing game.

Fort Madison would score on their second possession to cap a six-play 50-yard drive with a 15-yard catch-and-run from Boyer to Williams for a 13-0 lead with the missed PAT.

The Demons would be ushered out on four downs on their next possession and then the Bloodhounds would go to work on a 14-play 75 yard drive to the Demon 7.

Williams would get his second touchdown shaking off a couple tackles off a screen and slipping into the endzone for a 20-0 lead with Boeding's extra point.

Washington would put together its best drive of the night starting at their own 29-yard line. Seventeen plays later at their own 21 yard line facing 4th and 15, Ethan Patterson would throw incomplete to turn the ball over to the Bloodhounds.

Fort Madison would push the ball all the way to the Demon 1 with :12 left on the clock in the first half and not be able to get over the goal line. Boeding would split the uprights with a 17-yard field goal to give Fort Madison a 23-0 lead going into the lockerroom.

Washington would make some adjustments and force the Hounds to punt on their first possession of the second half, but the Hounds' defense again shut out the Demon offense on four plays forcing a punt.

The Bloodhounds went six plays and on 4th and 4 were forced to punt. Washington let the ball bounce off the return man and into the air where Nathaniel Swigart caught it in mid stride and ran into the endzone.

However, per IHSAA rules, the ball couldn't be advanced by the kicking team, and the Hounds took over at the Demon 18. On the very next snap Williams got behind the secondary and hauled in his third TD of the night for a 30-0 lead.

Teague Smith would cap the scoring for the Hounds with a 2-yard dive in the fourth quarter to make it 37-0 and set the running clock before the Demons would score the final touchdown in the waning moments.

Head Coach Derek Doherty said the win let the Hounds know what they can be.

"Hopefully this makes us a believer in what we can do. That's kind of what we've been talking about. We know what we're capable of if we just go out and be us. I hope that message was sent home," Doherty said.

"I think they learned who they can be and that's really big. It worked tonight, but we're going to go right back to the drawing board and try to work some magic next week."

Doherty said the Hounds did get caught a bit off guard in the third quarter when Washington (2-2) did some different things defensively on the short screens.

"They were covering our three with two and we did a nice job of taking advantage of that. But then they started playing their coverage games and they caught us off guard for a moment. But once we settled back in, we were doing what we had been doing in the first half."

Wiseman and Williams each had six catches for a combined 133 yards.  Boeding had four catches for 44 yards.

Hayden Segoviano again led the Hounds defensively with 12.5 tackles, eight solo and three  for a loss. Fort Madison combined for five sacks on the night.

Fort Madison travels to Mt. Pleasant next week to open District 4A-3 action.