Fort Madison puts up 34 points in 2nd half in win over Mt. Pleasant 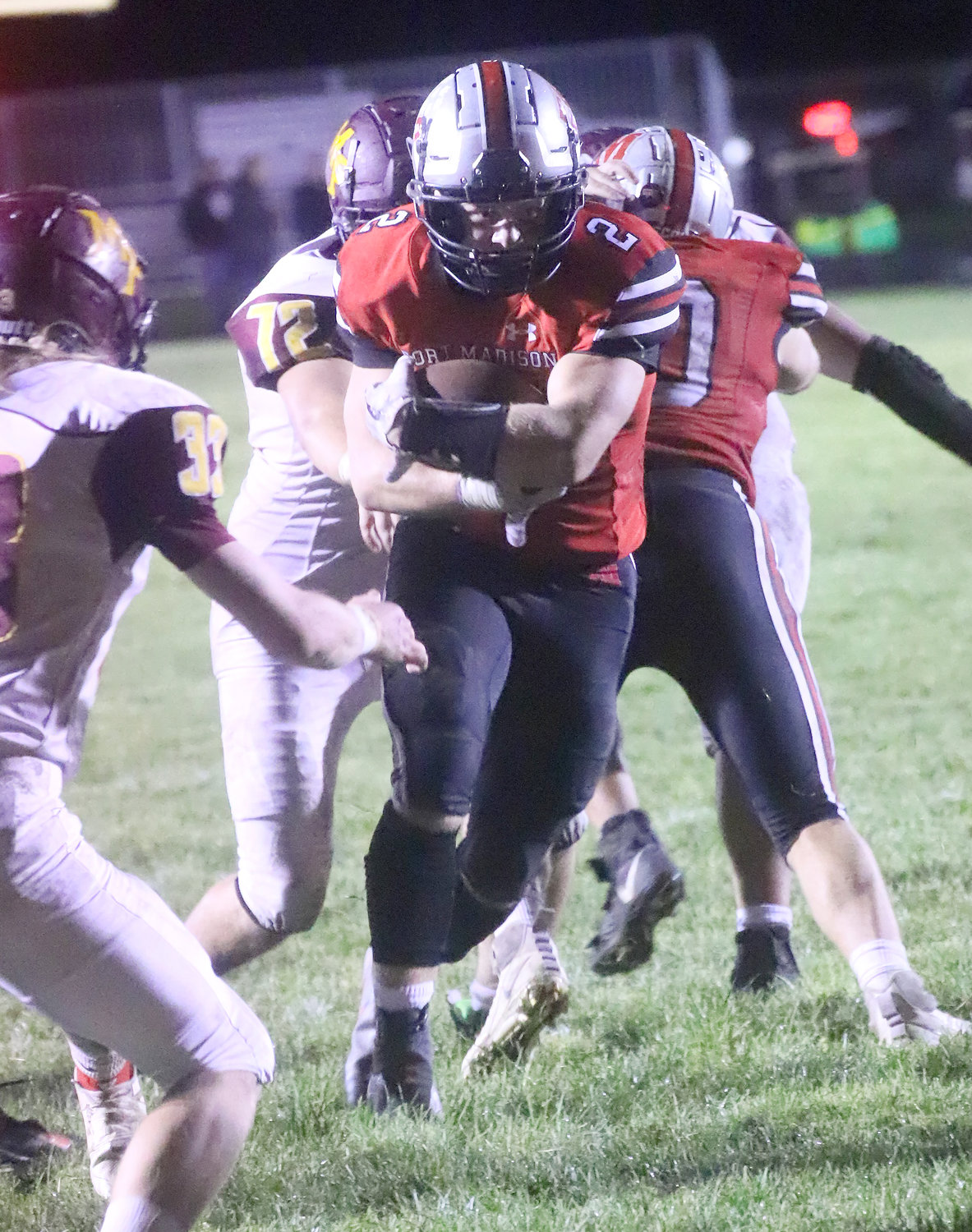 Fort Madison junior Teague Smith scores from six yards out in the early going of the second half Friday night in Fort Madison's 46-0 win over Mt. Pleasant.
Photo by Chuck Vandenberg/PCC 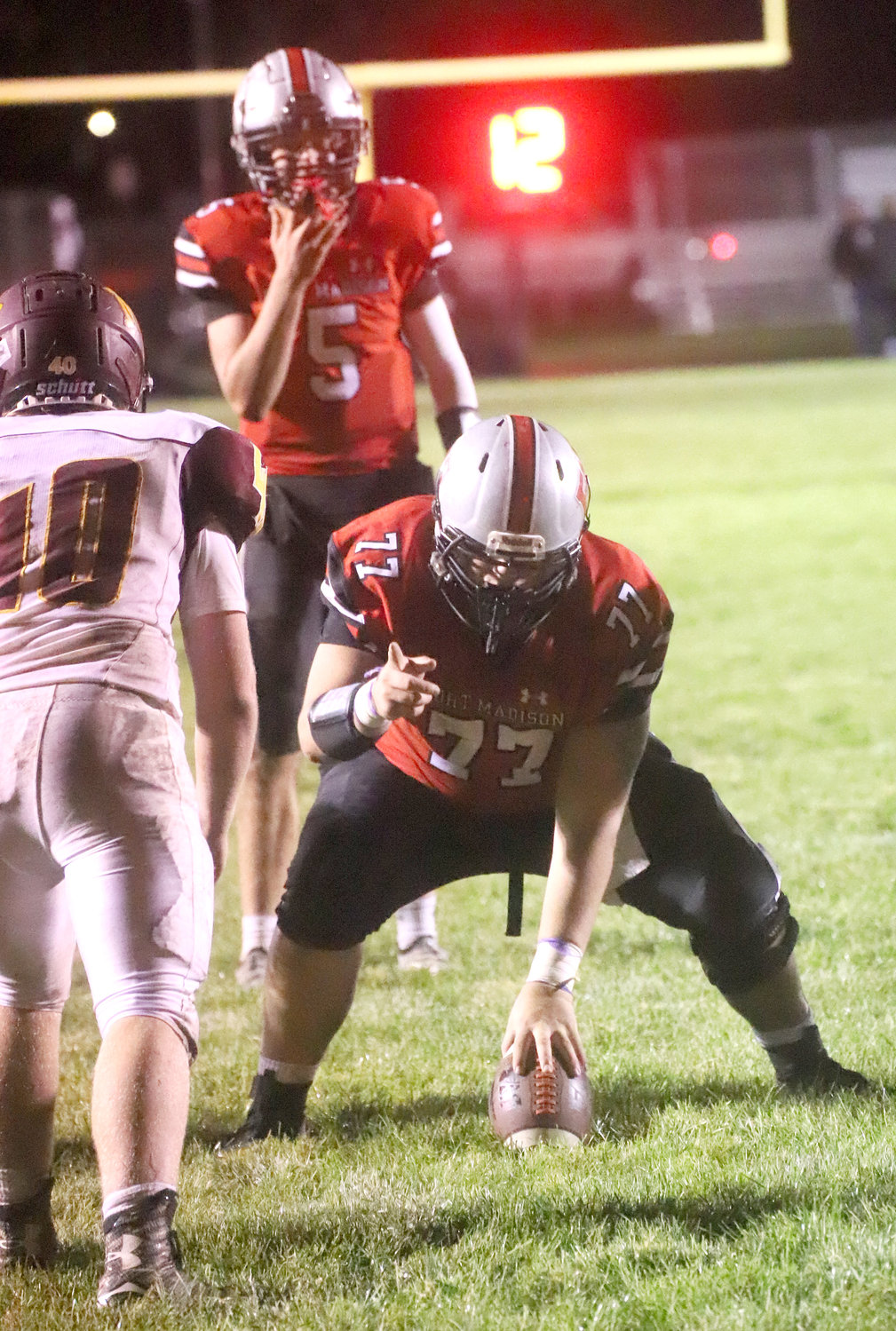 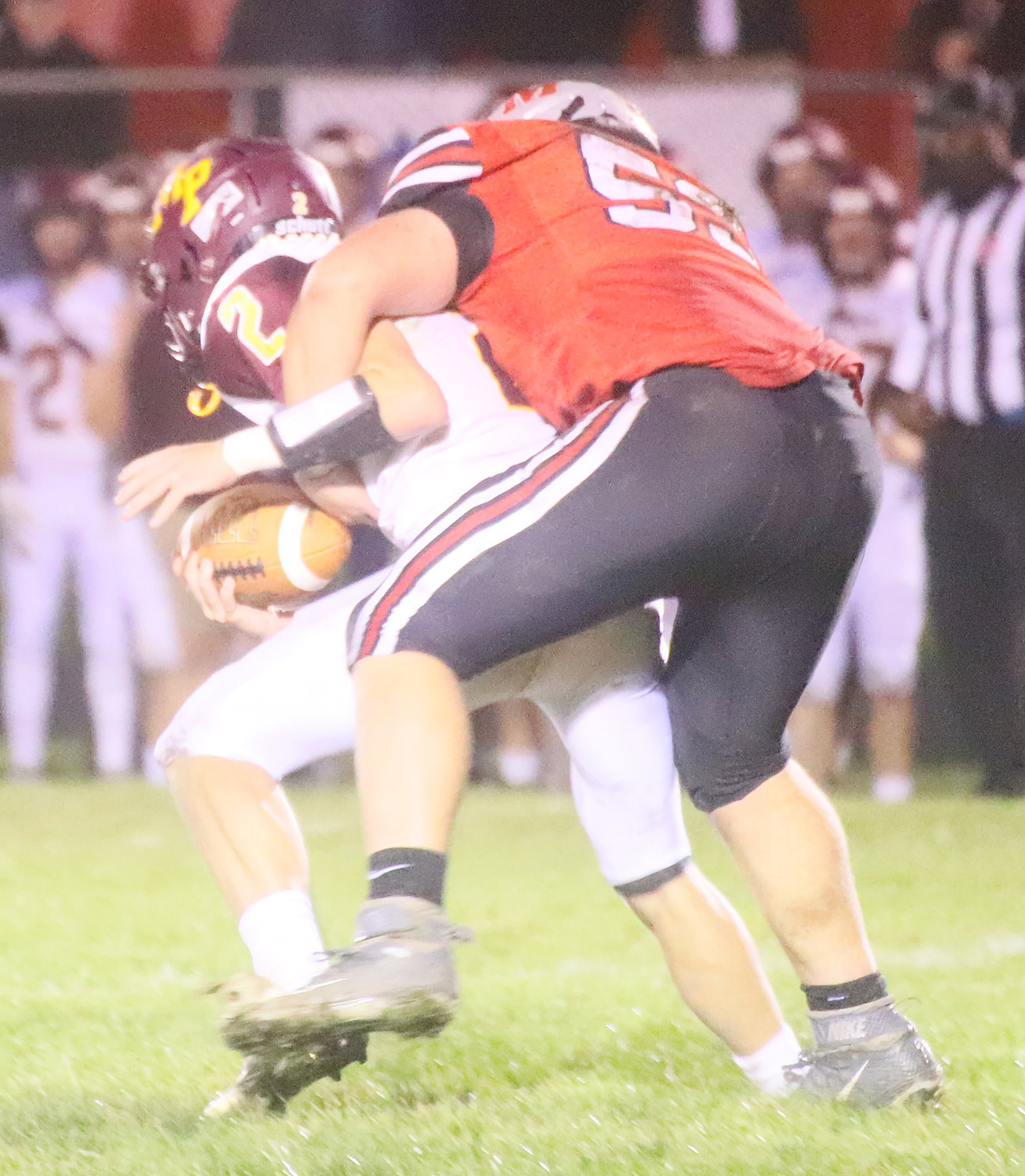 The Hounds' Daniel Sokolik is in the backfield again Friday night as he gets a sack on Mt. Pleasant's Jacob Richtman in the third quarter Friday night in Fort Madison.
Photo by Chuck Vandenberg/PCC 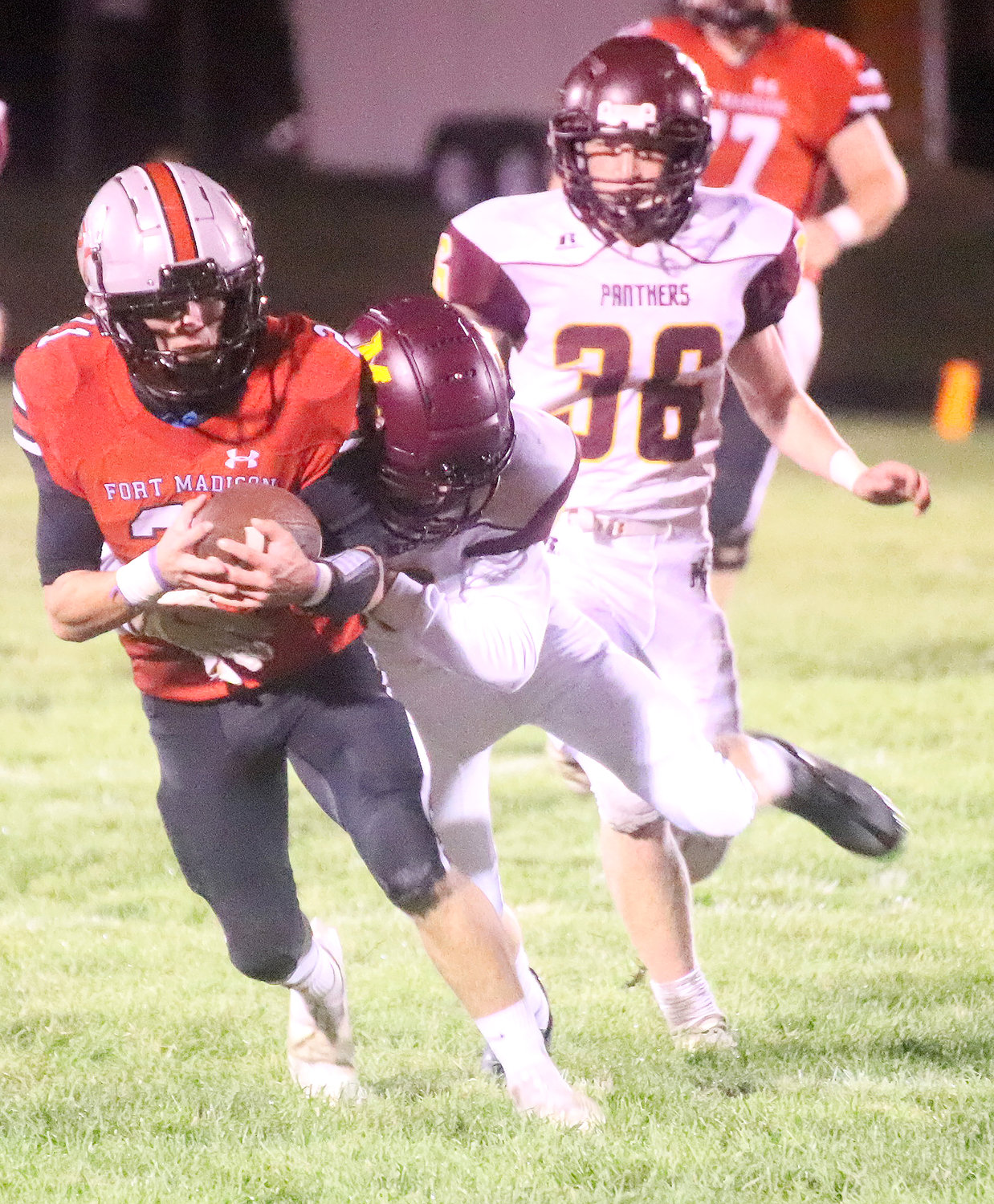 Senior Kane Williams looks to the endzone after a catch in the second half Friday night in Fort Madison.
Photo by Chuck Vandenberg/PCC 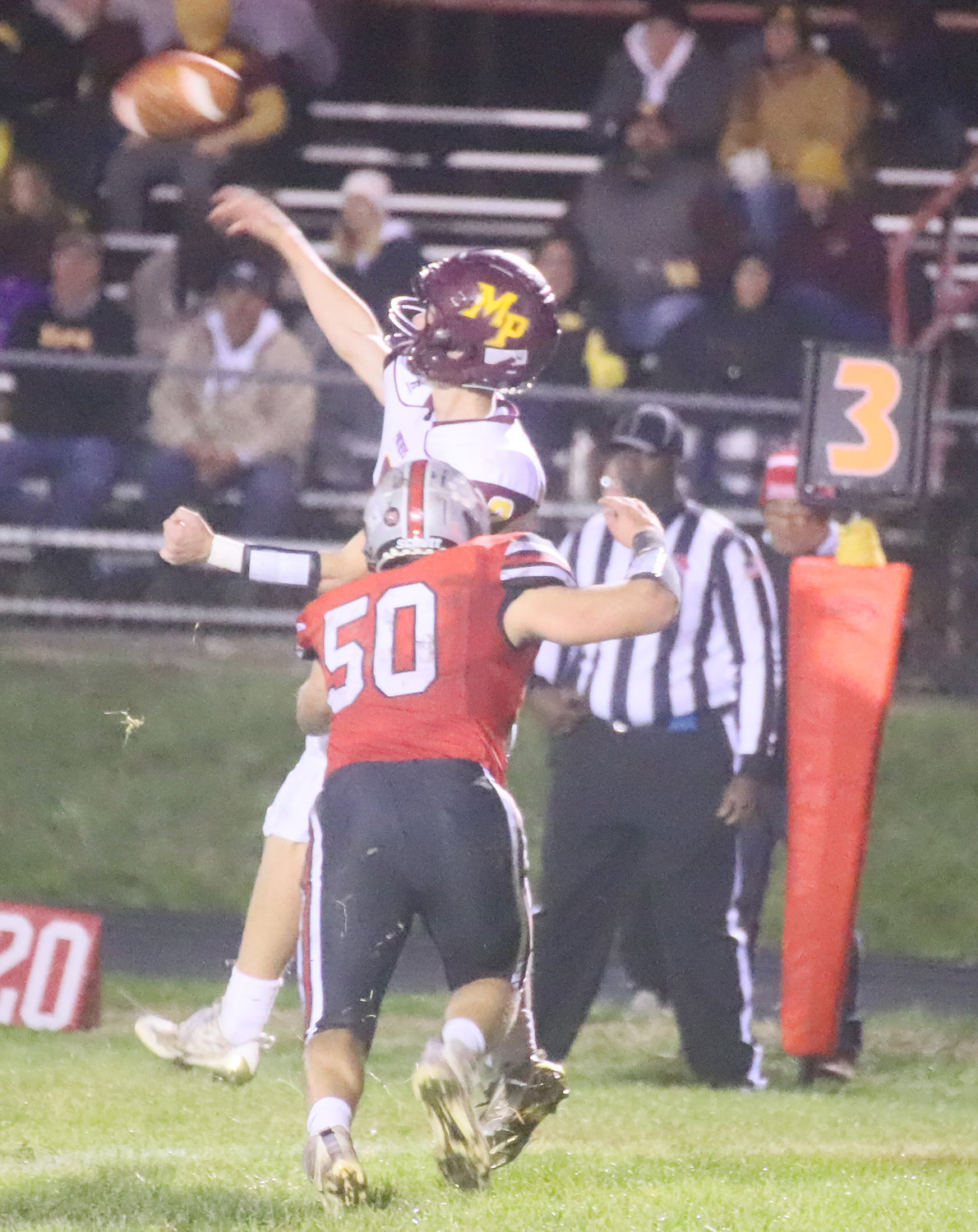 Ike Thacher, art of the Hounds defensive T-N-T threat on the defensive line, gets pressure on Richtman in the second half Friday night
Photo by Chuck Vandenberg/PCC 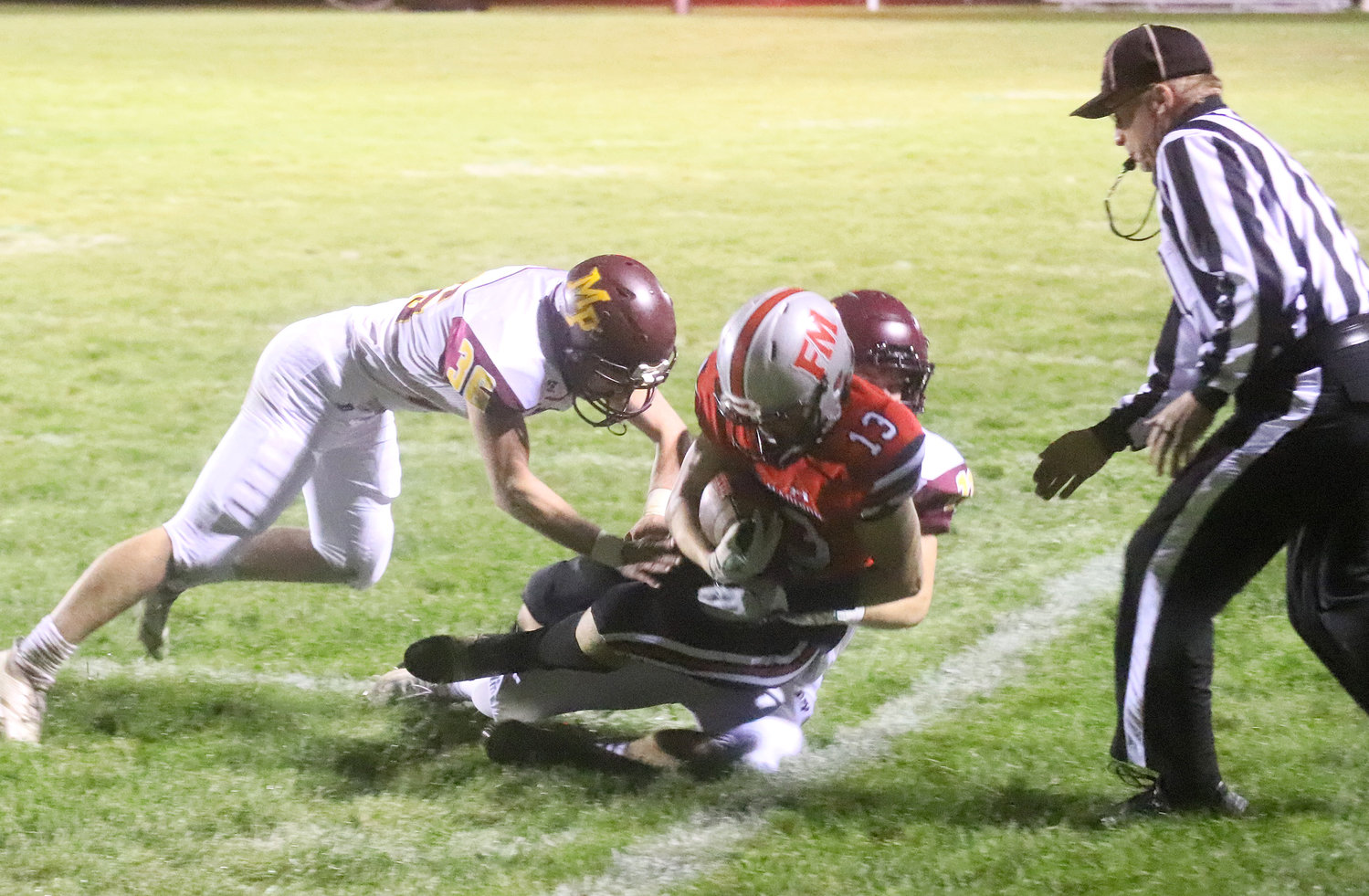 Hounds wide receiver Nathaniel Swigart gets corraled in the front of the Fort Madison in Friday night's 46-0 win over Mt. Pleasant.
Photo by Chuck Vandenberg/PCC
Previous Next
Posted Saturday, September 24, 2022 1:56 am

Getting it going in the second half

Our line is really, really good. They are one of the best in the state and they were opening up some huge holes in second half and when I get the ball I want to make every opportunity count”
Teague Smith - Fort Madison tailback
Chuck Vandenberg, Pen City Current Editor

FORT MADISON - Bloodhound head football coach Derek Doherty said the Hounds have had a bit of trouble getting into gear this season.

But Fort Madison shifted just fine in the second half Friday night as they rolled to a 46-0 win over Mt. Pleasant in District 4A-3 football action at Richmond Stadium.

"I think the message here is just be us. We hope lessons were learned that staying on script is important and I trust that they all learned that, but we're going to have to go back and reevaluate why things weren't clicking in the first half," Doherty said.

"Was it homecoming, staying up too late, trying too hard...we're going to have to have open honest questions about that - and we will."

The Hounds' offense played just eight snaps from their own side of the field in the first half, yet managed only 12 points. Two of those came on a safety when Mt. Pleasant quarterback Jacob Richtman slipped on the wet grass in the endzone in the Panthers second series of the night.

But Fort Madison quarterback Aiden Boyer was having trouble hooking up with most recievers with passes over the top or behind, while some just slipped through open hands.

Fort Madison would finally find the endzone on their fourth series of the night. Starting at midfield, Boyer would flip a pitch to Kane Williams streaking across the backfield and Williams would go 19 yards to the right sideline for the score.

Boyer would keep the ball on the next play on a read option for a few yards, and then the Hounds countered with the same pitch play to Henry Wiseman this time to left and Wiseman would squirm through the secondary for a 26-yard TD run and a 9-0 lead.

Leif Boeding would add a  25-yard field goal with just over a minute left in the second quarter for a 12-0 lead at the half.

But out of the lockerroom the Hounds, now 5-0 and 2-0 in the district, realized just who they were.

"Our message at halftime was we felt like we were pressing too hard - trying to do too much," Doherty said. "They needed to settle in and be themselves. We know what kind of ballplayers they are and they were just doing unorthodox things."

That ended pretty quick when on the third play from scrimmage to start the third period, junior tailback Teague Smith bulled in from six yards out for an 18-0 lead.

Mt. Pleasant wouldn't get anything going in the next series, but returned the favor and forced a Fort Madison punt. The Panthers would then get their best scoring chance of the night pushing it to the Hounds' 28, but Richtman threw incomplete on 4th and 8 to give it over to Fort Madison.

On 3rd and 10 Boyer found Kane Williams on a swing pass good for 28 yards and a first down.  Smith would get five on the next carry and the break free for a 37-yard touchdown run off the right side.

However, three penalties against the Hounds on the play, including a holding penalty and an unsportsmanlike conduct call on the sideline, pulled the ball all the way back to the Mt. Pleasant 32.

But if it ain't broke don't fix it, and Hounds offensive coordinator Justin Menke called the exact same play, with the exact same result as Smith again bounced out to the right wide and raced down the sideline for the TD.

"I was mad, but I was like they can't stop me I'll just try and do it again. I wasn't going down the second time. There was no way I wasn't going in," he said.

Smith gave credit to the dawgs up front for opening holes all night long. The junior had his best night of the season going 115 yards on 12 carries and two scores.

"Our line is really, really good. They are one of the best in the state and they were opening up some huge holes in second half - and when I get the ball I want to make every opportunity count," he said.

Junior guard Ike Thacher said the first half yips were in the past.

"It doesn't matter - we got it going in the second half," he said.

"We just started getting our blocks and not letting go.  We didn't stop and we were just working harder than them and were able to break 'em."

Leading 26-0 with 3:48 left in the third, Mt Pleasant took the kick at the 22 and failed to advance a single yard under the pressure of the Hounds defense and were forced to punt.

With more solid field position starting at the Panther 49, Fort Madison ran Smith twice to start things. On 2nd and 5 Smith again broke into the secondary for 36 yards setting up Williams for a pitch pass to the right. Williams bounced off about four Panther tacklers and spun into the endzone for a 34-0 lead.

Just three plays into Mt. Pleasant's next series, Leif Boeding jumped a route and picked off a pass falling backwards guarding an out route to the left. Fort Madison wouldn't capitalize and would have to punt, but the defense would step up again and clean things up forcing another 4-and-out for the Panthers.

The junior would score the Hounds final points when Marcus Guzman, who took over calling the plays with the Hounds up 40-0, found Boeding again behind Mt. Pleasant's safeties for an 86-yard catch-and-run down the Panther sideline to set the final score.

Doherty said it's nice to have someone who has confidence to step in when Boyer needs to come to the sideline.

"That's really nice and he'll do whatever we ask of him. That's the kind of kid he is," Doherty said.

But he said the defense reached a goal that they just missed last week against Washington.

"I'm so proud of Coach (Jason) Crooks' defense. It was a major goal of ours to get that (shutout). We were close to that at the end last week and we gave up one late," he said.

Thacher had seven tackles, four for losses, to lead the Hounds defense. Daniel Sokolik had 6.5 tackles and batted down pass attempt. He also had three tackles for losses and a sack.