Hounds hold on for win over Nikes 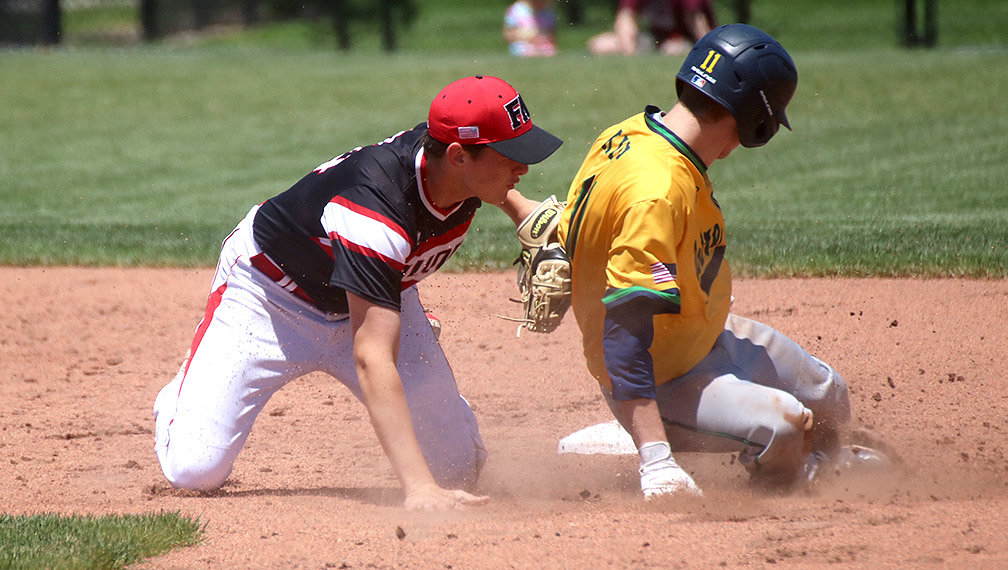 Fort Madison's Jason Thurman applies a tag to the back of Dylan Kipp on a steal attempt during the Bloodhounds 4-3 win over the Nikes Saturday afternoon. Photo by Chuck Vandenberg/PCC
Posted Saturday, May 29, 2021 5:38 pm

Williams was part of one-run seventh inning that proved to be the game-winner.

The Hound started the 7th with a strikeout and then Aiden Pennock would work a seven-pitch base on balls. Garrett Hannum would single to left for the Bloodhounds' first hit since the first inning. Pennock advanced to second on the liner. Then Landes Williams singled to right field loading the bases.

Thurman would had come on in the 6th inning in relief, and give up a single to start the inning. A sacrifice bunt put the tying run at 2nd, but Thurman struck out the next two hitters to end the game.

Fort Madison Head Coach Ron Walker said the scoreboard was going to determine how long Williams remained in the game.

"He did a good job competing. We come out with a 3-run lead and he hits the lead off batter for them," Walker said. "But he found away to get back in sync, battled through and gave us a chance to win."

Walker said the Hounds are limited in pitching right now as spring sports ran right up against the baseball season and the kids haven't been throwing as much.

Williams led off the game with a first-pitch single to right field that went off the glove of Notre Dame's Anthony Hoffman. Jason Thurman would single to center to put two men on with no outs.

Vasin Thurman would fly out to shallow center with the runners holding. Tate Johnson would then work a walk eight pitches to load the bases. before Colton Engeman connected on a 2 RBI single to right that scored Williams and Thurman and moved Johnson to third

Matt Hopper would fly out to right field to score Johnson on a sacrifice before a strike out ended the inning with Fort Madison up 3-0.

Notre Dame would get two of the runs back in the bottom of the first. Landes Williams plunked Carson Chiprez with his first pitch of the afternoon and then gave up a double to Brady Oleson to right center.

Williams was then called for a balk with runners at 2nd and 3rd plating Chiprez. Fort Madison Head Coach Ron Walker had a mound conversation with the umpires, but the call stood.

Oleson would then take off for home on a Williams' delivery. The ball squirted away from catcher Kane Williams allowing Oleson to score before Josh Smith struck out. Dylan Kipp would hit a dribbler to third that got caught up on the heavy infield grass, but Kane Williams would throw him out trying to steal second in the next at bat to retire the side.

Landes Williams and Smith would then get into a five-inning pitchers dual where neither team would register another hit until the bottom of the sixth when Engeman broke in on an Anthony Hoffman fly ball to left field, but then had to retreat and couldn't catch up allowing Hoffman a double.

Chiprez would move him over with a bunt down the first base line, and then the Nikes put down another bunt with the speedy Hoffman coming down the line scoring on the squeeze to make it 3-3.

Walker took the blame for that run.

"That's 100% my fault. The guy swung away at strike one and the second pitch brought it in. I saw it coming and should've called a pitch out and trusted the defense because I was 90% sure it was coming. That's on me."

"They just wanted to put pressure on us and play small ball," It was a one run game and tight the whole way," he said.

Oleson came on in relief of Smith in the top of the 5th and gave up a one-out walk to Garrett Hannum, but retired the next two hitters.

Williams would issue a walk to Lucas Johnson to start the bottom of the 5th. A sacrifice bunt moved him over, but Williams would turn and pick off Johnson leaning at second to clear the bases. A strike out would move the game to the sixth.

Tate Johnson would reach with a on a dropped third strike with one out. He swiped second and the throw went into center field allowing him to reach third. But Oleson wold strike out Engeman, and Hopper would ground out back to the pitcher to end the threat.

Walker said the Hounds (2-0) are still getting into preseason shape on the field and need a more consistent approach.

"We just had to complete more. Our plan and approach at the plate was there one at bat and the next at bat it wasn't," he said. "We didn't compete very well. Chalk it up to the rain out."

The game was originally planned for Thursday night, but rain forced the postponement until Saturday.

Jason Thurman and Williams went 2-for-4 on the afternoon. Engeman and Hannum had the only other hits for Fort Madison. Engeman had two RBI, while Thurman and Hopper each had one.

Williams struck out six and walked two while scattering four hits and giving up all three runs earned. Thurman gave up a hit and struck out two in getting the win.