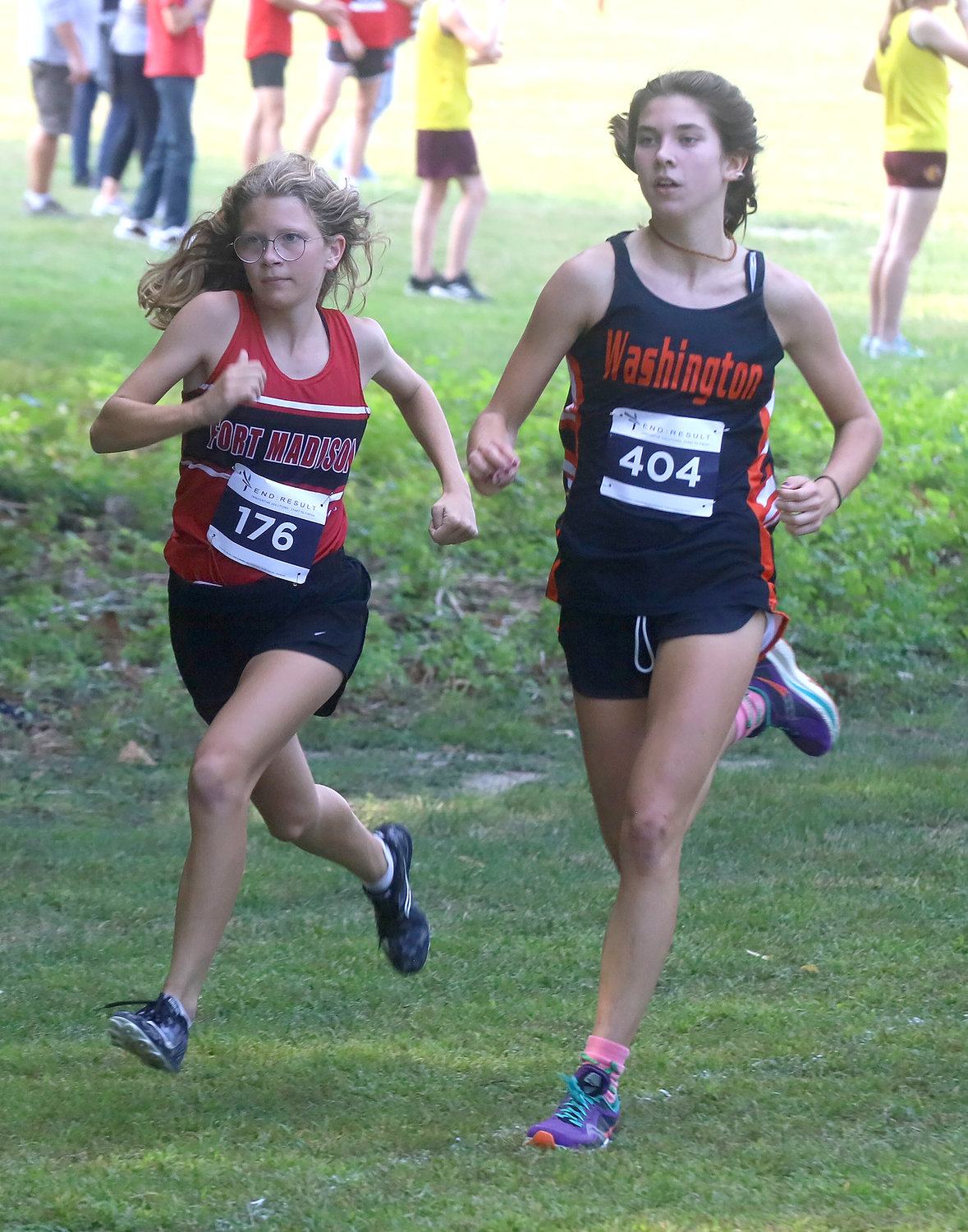 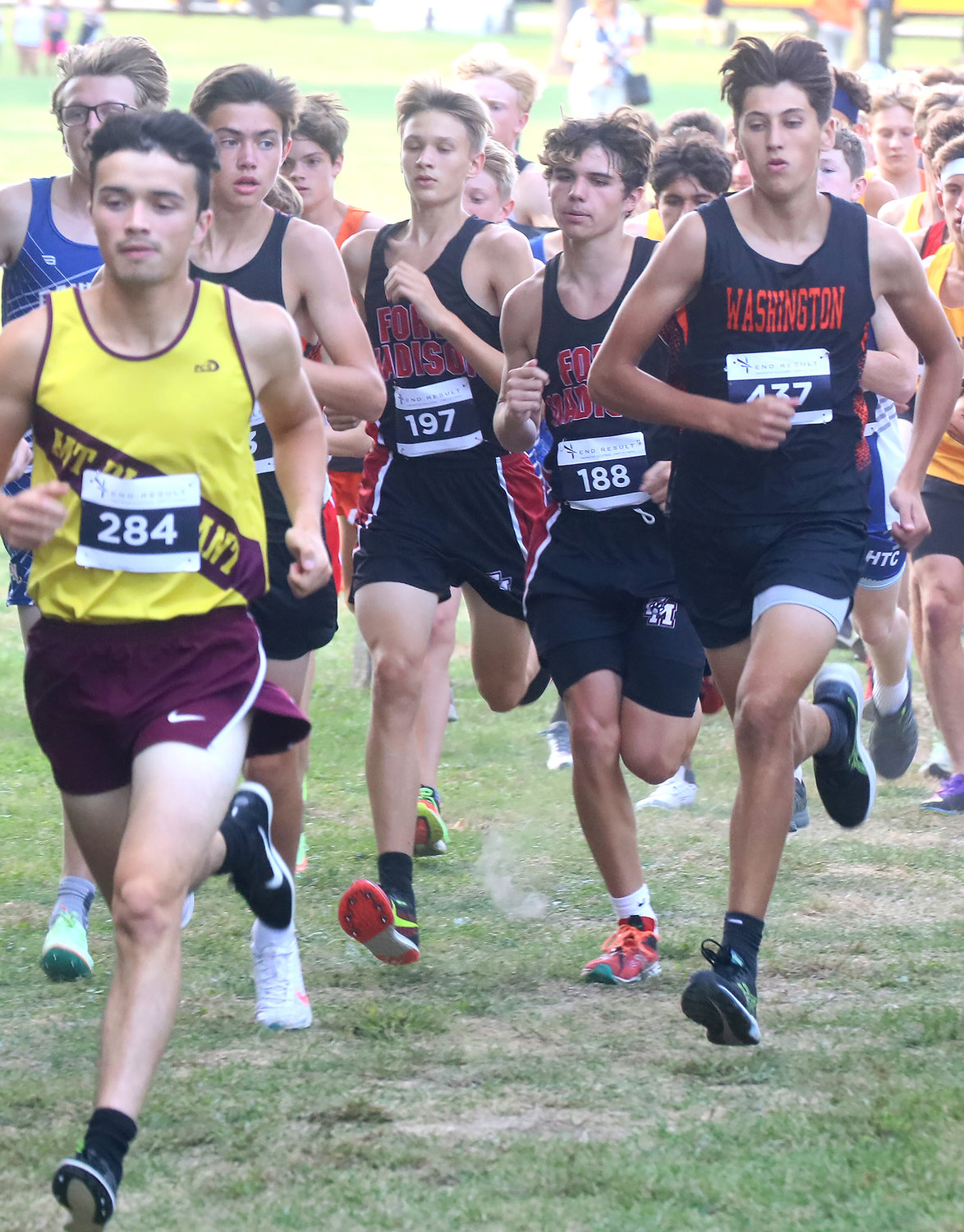 From left to right, in the pack for Fort Madison, Riley Tripp (197) and Mason McLey (188) jockey for position just inside the fence at the Timm Lamb Cross Country Invitational Thursday in Fort Madison.
Photo by Chuck Vandenberg/PCC
Previous Next
Posted Sunday, September 18, 2022 4:30 pm

I just saw everyone being super fast at the high school level when I was in middle school and I was like there's no way I could do that. But I guess dreams do come true”
Avery Rump, FMHS freshman
Chuck Vandenberg, Pen City Current Editor

The freshman harrier for the Lady Hounds cross country team is having a season that even she describes as a dream come true.

Rump hasn't finished outside the top three at any event this year and has outright won three varsity events this year.

"I thought high school was going to be the end of my career," she said just minutes after racing to a 19:35.6 at the Timm Lamb Cross Country Invitational Thursday at Rodeo Park in Fort Madison.

The meet, which has been held at the Fort Madison Middle School the past three years was moved back to the Rodeo Park course due to construction underway at the middle school.

"I just saw everyone being super fast at the high school level when I was in middle school and I was like there's no way I could do that," she said.

"But I guess dreams do come true."

Rump, and her sister Addison, also a freshman led the Lady Hounds to a second-place finish behind Washington. Addison took 4th place with a 21:14.5.

Junior Paetyn Wiegand was eighth overall with a 21:49.4 and sophomore Allison Lamb came in 17th with a 22:54.0 Ellie Huebner rounded out the scoring runners for the Lady Hounds with a 22:54.0 good for 17th overall.

Rump said her goal this year is to place in the top 10 at state at Fort Dodge's Waterworks Park. She said that way she can get  her picture up with the greats in the FM Multi Purpose Room.

"My big goal this year is get my face up on the rafters of MPR room in the High School, because I feel that would be so cool, and I think you have to place in the top 10 at state to do that," she said.

The Rumps have been running since they were small children at the age of 3. Their father, Matt, a PE teacher in the Fort Madison system took the girls to the high school track and had them run a lap," Avery said.

But she said at the start she was always trailing Addison.

"I would run a lap around the track with my sister and I was always behind her. I decided one day that, 'Hey, I don't have to be slower, I want to be the best I can be.' Since then, I've been training hard, and working my butt off and that work is paying off."

Addison who's having a very strong start to her high school career as well, credits her father and the competition with her sister as the main reasons for that success.

"Usually it's competitive with her. She's always been faster and she works really hard. It's no surprise she does great," Addison said.
"But I think  the competition in front of me is what I focus on. She's usually way out there right when the gun goes off."

Currently Avery is ranked 5th in the state in girls 3A according to the Iowa Association of Track Coaches, however both girls have aspirations of running at Waterworks Park in Fort Dodge in October.

The Fort Madison boys also claimed second place in their run led by Mason McLey's 18:11.1 which placed him in the top five overall. Jacob Shottenkirk was second for the Hounds and sixth overall with an 18:11.8 right behind McLey.

Fort Madison finished with 55 points total, 22 behind Washington who won the meet with 22 points.