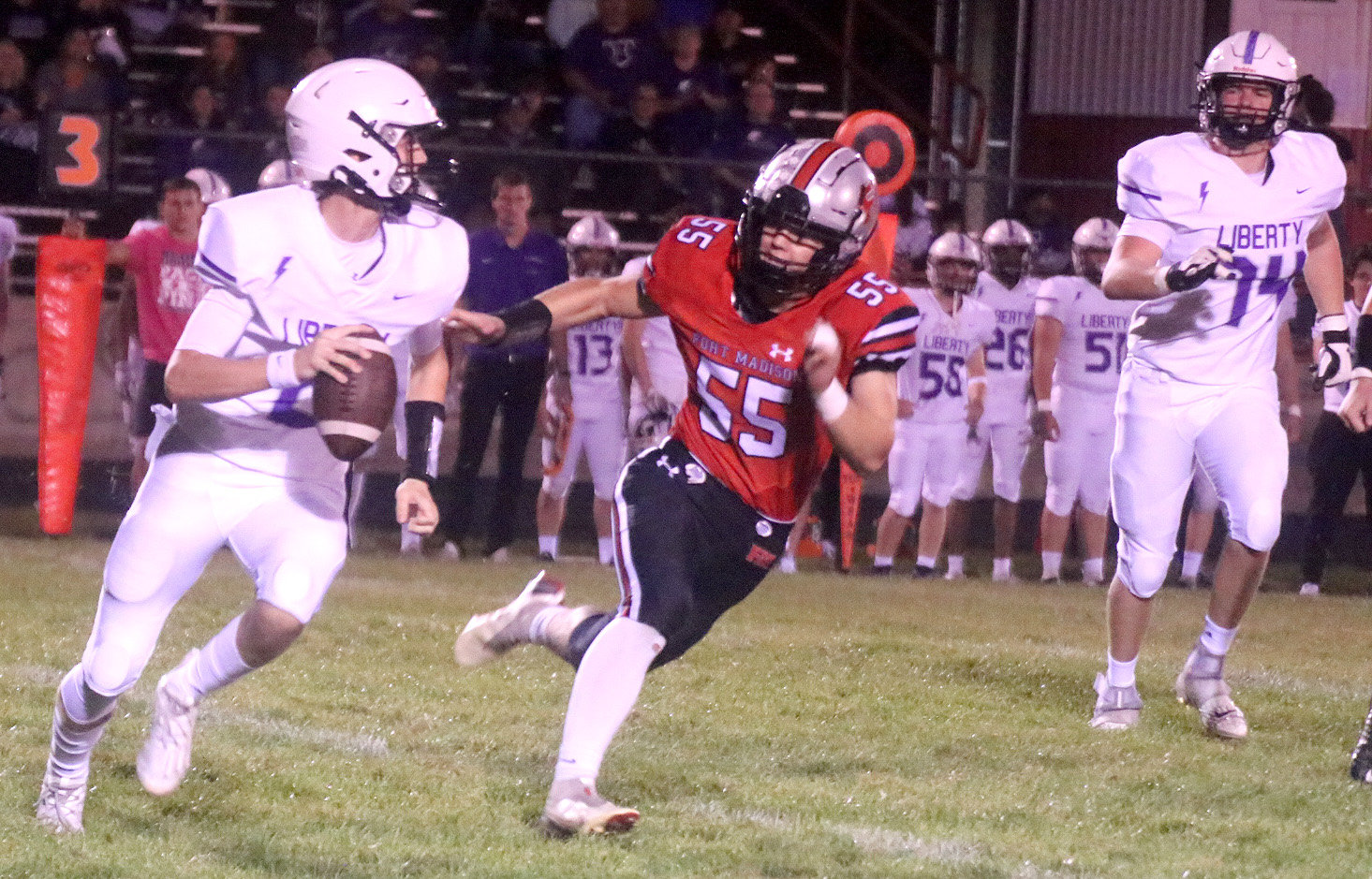 Fort Madison's Tanner Settles (55) chases down Iowa City Liberty quarterback Tye Hughes in the first period. The Bloodhounds suffered their first loss of the year 24-16 to move to 6-1. Photo by Chuck Vandenberg/PCC
Posted Saturday, October 9, 2021 12:49 am

Ranked 6th in the state in Class 4A, Fort Madison came into the contest looking to extend their season unbeaten streak against an underrated Iowa City Liberty squad.

"We knew it was going to be tough. No excuses, (Liberty) did a great job of executing and they are a solid team. Lots of dudes on the sidelines and they are big," Doherty said.

"But we had opportunities. We dropped three balls in the endzone and had a pick in our endzone," Doherty said. "We gave our defense a really bad start at the beginning of the game - but that's the game of football."

Fort Madison shut down Liberty out of the gate on a 4 and out and took over at their own 26. On the first play from scrimmage, Landes Williams hit Kane Williams on a screen. Williams fumbled the ball but recovered for a one-yard loss. Two plays later, Landes Williams was picked off by Christian Barney who brought the ball back to the Fort Madison 15.

Two plays after that, Darius Willis-Newell went in from seven yards out for the game's first score and a 7-0 lead.

Fort Madison would answer after bringing the kick back to the 30. Williams would overthrow Tate Johnson on a seam route in the middle to open the drive. After a 4-yard run on 2nd and 10, Williams, scrambling to his left, found Kane Williams for a 25-yard completion down the Hounds' sideline for a 1st and 10 at the Lightning 25.

Williams would carry the next three for 17 yards and a 2nd and 4 at the 7 where Jakob McGowan hurdled a downed lineman off tackle and broke another tackle for the touchdown. The point after snap got away and Fort Madison couldn't convert the fire play.

Liberty would take the kick on a touchback at the twenty. On the second play from scrimmage, Liberty quarterback Tye Hughes' pitch would bounce off Willis-Newell and Fort Madison would recover at their own 33.

Williams would take the next snap and find Johnson in the back of the endzone over the shoulder to give Fort Madison a 13-7 lead.

Xander Wellman would again pin the Lightning deep on a touchback, the Liberty would put together its longest drive of the game going 80 yards on 11 plays capped by a Willis-Newell sweep into the endzone from a yard out. The PAT was good and Liberty retook the lead 14-13 with :07 left in the first period.

Fort Madison would then start at their own 20 and the Hounds would rack up a couple of first downs, one courtesy of a 15-yard pass interference call. But the drive would stall at the Hounds' 46, forcing a punt.

Liberty took over at their 25 and went 75 yards on five plays capped by a half-back pass on a reverse from James McKinney from 30 yards out to give Liberty a 21-13 lead with 6:26 left in the half.

Fort Madison would then start at their own 26, pick up two first downs on three plays, with McGowan going for 14 on the first play and then Williams keeping the ball for nine and seven-yard carries.

On 3rd and 3 at Liberty's 36, Williams would get free on a 20-yard run off tackle to the 16. After McGowan would pick up a hard yard, Williams was looking for Wiseman streaking across the endzone just across the goal line. But Liberty's Wyatt Williams had other ideas and cut in front of Wiseman and picked off the pass for a touchback with 2:39 left in the half.

Fort Madison would call a timeout to regroup. Out of the break, Liberty went seven plays to their own 37 where the drive stalled at 4th and 6. A Hound offsides call on a tricky formation shift by the Lightning made it 4th and 1. Liberty went for it, but Teague Smith crunched Willis-Newell in the backfield causing the ball to squirt out where the Hounds would recover at their own 39.

The Bloodhounds would go back to work and move the ball to the 6, courtesy of a pass interference call trying to get the ball to Johnson on the left side. A bad snap resulted in a 6-yard loss and then Johnson couldn't haul in a pass over a Liberty defender in the endzone and Fort Madison settled for 26-yard field goal from Wellman to make it 21-16 at the half.

The only points in the second half would come on a 24-yard field goal by the Lightning after Fort Madison fumbled at their own 20 in the third period.

Fort Madison looked to have taken the lead back on the next possession. A good kick return by Johnson got 15 yards added on a personal foul on Liberty giving Fort Madison the ball at the Iowa City 47. McGowan and Williams picked up 10 yards and a first down on three carries, and then Williams went to the air. On back-to-back plays he found Johnson again behind Liberty defenders, but the ball bounced out on both occasions and Fort Madison turned it over on downs at the Iowa City 31.

Neither team could get anything going down the stretch with Fort Madison forcing a couple punts and Iowa City putting up two fourth down stands to force the ball over on downs.

As Liberty was trying to run out the clock, they found themselves at 3rd and 16. Hughes rolled slightly to his left and threw to the sideline, by Mikey DiPrima jumped in front of the offering and raced 20 yards the other way to give Fort Madison the ball at Iowa City's 46 with 2:07 left in the game.

Williams dropped back on four consecutive plays and each time was forced out of the pocket causing him to miss on all four tries, and the Lightning went into the victory formation to get the win.

Doherty said the Hounds played a bit out of their style and it ended up hurting them at points in the game. But he said there's still plenty to play for and the Bloodhounds need to think that way.

"We bit on some things and that's uncharacteristic of us, but there's still opportunity out there," he said. "We'll go back and watch film and once we show the guys - I mean, they know, but we had several opportunities to win this game and we didn't capitalize. When you do that against a good team, it's gonna come down to a few plays.

"But we've got a lot to play for still. We're proud of our guys and this definitely wasn't a lack of effort."

Fort Madison was led by Williams on the ground with 86 yards on 21 carries. He also was 11 of 25 through the air for 108 yards and a touchdown. Johnson had four catches for 40 yards and the score. Kane Williams had three catches for 51 yards. Wiseman and McGowan each had two grabs.

Smith led the Hounds' defense with eight tackles, six solo and one sack, and a forced fumble. Wiseman had six tackles and Austin Ensminger had 5.5. Ike Thacher had 3.5 tackles, but two were for losses with one sack.

Fort Madison travels to Class 4A No. 1 North Scott on Friday and then wraps up the regular season with a critical game at Bracewell against the Grayhounds in two weeks.