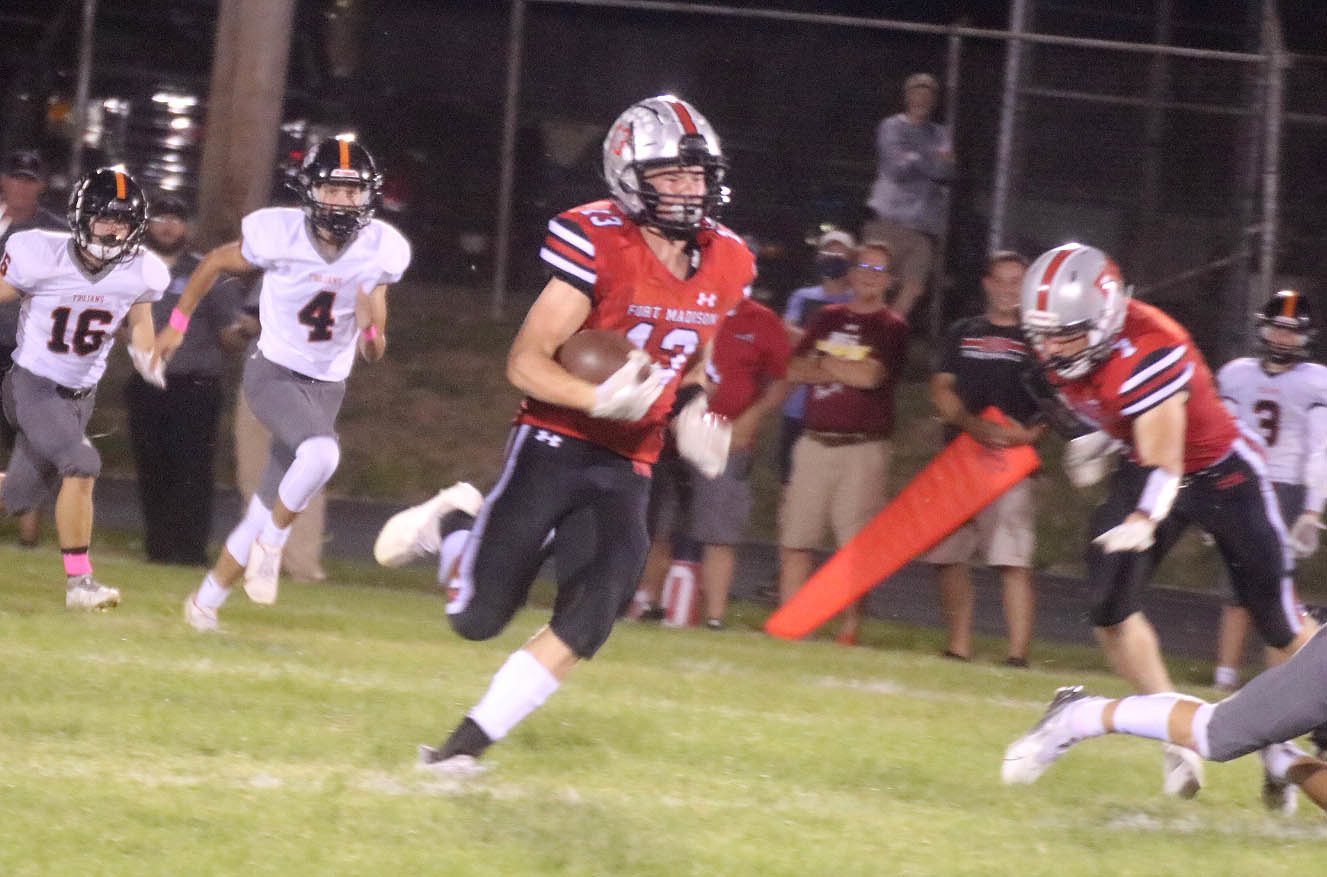 Fort Madison senior Tate Johnson (13) breaks free on the opening kick off of the 2nd half and races 90 yards for a touchdown as the Hounds moved to 3-0 with a 55-14 win over Fairfield Friday in Fort Madison. Photo by Chuck Vandenberg/PCC
Posted Friday, September 10, 2021 11:47 pm

FORT MADISON - A shift in strategy on offense may have been the pull pin to an offensive explosion from the Bloodhounds Friday night.

The Hounds took down Fairfield, who came into the newly polished Richmond Stadium unbeaten, 55-14 on a six-touchdown performance from senior quarterback Landes Williams.

Williams rushed for three touchdowns, two in the first quarter and threw for three more, the final one on a pitch pass to Kane Williams who had gone in motion to the right and took the flip 49 yards to the house for Fort Madison's final score.

Aside from a plethora of yellow flags on the Bloodhounds, things seemed to be firing on all cylinders for the 3-0 Bloodhounds.

"That was probably the most were were dialed in coming out we've been," Head Coach Derek Doherty said.

"But we've got a problem in the second quarter. We were bad last week and and bad again this week. We didn't make a lot of adjustments we just had to go back to attitude and controllables."

Whatever was said in the locker room worked as Tate Johnson took a bounding kickoff to start the second half cut to the middle and then found his way back to the Hounds sideline for a 90-yard kick off return for a touchdown to make it 28-0.

Johnson also reeled in a 69-yard touchdown pass from Williams on a seam rout from left to right down the middle of the field. Johnson caught the ball on a full run over his shoulder and the outstretched arm of a Trojan safety for his second receiving touchdown of the year.

The Bloodhounds would score twice in the first quarter on 28- and 6-yard rushes by Williams to get a quick 14-0 lead.

A quick four-and-out for Fairfield forced a punt. Fort Madison took over at their own 21. Williams would hit Johnson on a five-yard slant before Jakob McGowan picked up the first down on the next carry. Then Williams dropped back and connected with Johnson on the 69-yarder for a 21-0 lead that would carry til halftime.

After Johnson' return for the touchdown to open the second half, The Hound defense, which still had yet to be scored on, held the Trojans to one set of downs forcing another punt.

Fort Madison would take over at their own 37 on a short kick. Williams would hook up with Xander Wellman on back-to-back quick outs for 19 yards. Williams would then call his own number three times in a row for 23 yards capped by another 6-yard run to the right pylon. The extra point failed which kept the Hounds from getting the running clock.

Fairfield would get another touchdown when Allen found Haines in right corner of the east endzone with Fort Madison subbing liberally down the stretch.

After the Allen rushing touchdown, the Trojans again kicked to Tate Johnson who almost broke free for another long run, but was wrangled down at the Hounds 33. Three plays later Williams would find senior Gavin Wiseman down the left sideline. Wiseman made a nice grab of a ball over his head and raced into the endzone for his first score of the year.

Fairfield would go quickly after the touchback kick off from Wellman. The Hounds forced the four-and-out and took over after a punt at the Fairfield 31. Two plays later McGowan took a hand-off to the left and made a cut up inside the outside linebacker and raced 31 yards untouched for his second TD of the year.

"I finally saw the cutback, took it and went in," McGowan said.

Doherty said that's a result of McGowan continuing to take in what coaches were telling him about his running style.

"That's credit to him for listening to coaches and them coaching the heck out of him. We knew what we had with him and we knew that he could make those cuts and get down hill. He wants to get better and he showed a ton of progress tonight," Doherty said.

But McGowan was quick to give credit to the line for opening the lane.

"Tanner (Settles) has really helped out a lot on the offensive line. It was a good decision for them to move him there."

Settles didn't play much offense last year, but was a defensive specialist getting time as defensive end and outside linebacker.

"I think being on the offensive line this year makes our team stronger. So I'm good with that," Settles said.

But he said teams are still underestimating the Hounds defense just a little bit.

"Our linebackers are killing it this year. It sucks that they scored on us, but that's going to happen."

The Hounds offense ran in a more uptempo fashion thanks in part to a new play calling system that put forearm bands with play codes on each player. The move was made because the Hounds coaching staff caught other teams picking up on hand signals that past two weeks.

"It was good decision that we were looking to make to get our offense going and it allows us to play faster and smoother," Doherty said.

"Obviously we have a lot to clean up penalty wise, however we feel about those, we still have to clean some things up."

Offensive coordinator Justin Menke said it felt like the offense was struggling the previous two weeks, despite Williams throwing for more than 300 yards last week.

"It felt like West Burlington last week and Keokuk in week 1... it wasn't like we were struggling, Landes threw for 300 yards last week, but towards the end of both those games we called enough of those plays the other teams were calling it," Menke said.

He said arm bands were part of the original design of the offense years back, but maintaining them was difficult so the Hounds transitioned back to hand signals until Friday night.

"But this year after two weeks we had kids telling us toward the end of the games that the other teams were calling out our game signals, so we pounded out these wrist bands this week and said let's give it shot," he said.

"We just really liked the transition. The other part is we didn't like the hand signals because our far side receivers were having to come off the line and look over and weren't getting set as fast. Now they're just getting verbage, look down and go."

Johnson lead the receivers with 93 yards and a touchdown on five receptions. Kane Williams had 54 yards, Wiseman 51 and Wellman 23. McGowan finished with 57 yards on six carries. McGowan also had five tackles including four sacks for a combined loss of 29 yards.

Tanner Settles and Austin Ensminger joined on three additional sacks. They combined for seven tackles on the night.

The Hounds travel to 1-2 Washington at Case Field on Friday night. They stay on the road in two weeks at Mt. Pleasant and then come back for Homecoming in three weeks to take on Clinton.