Hounds open with win for the fifth straight year 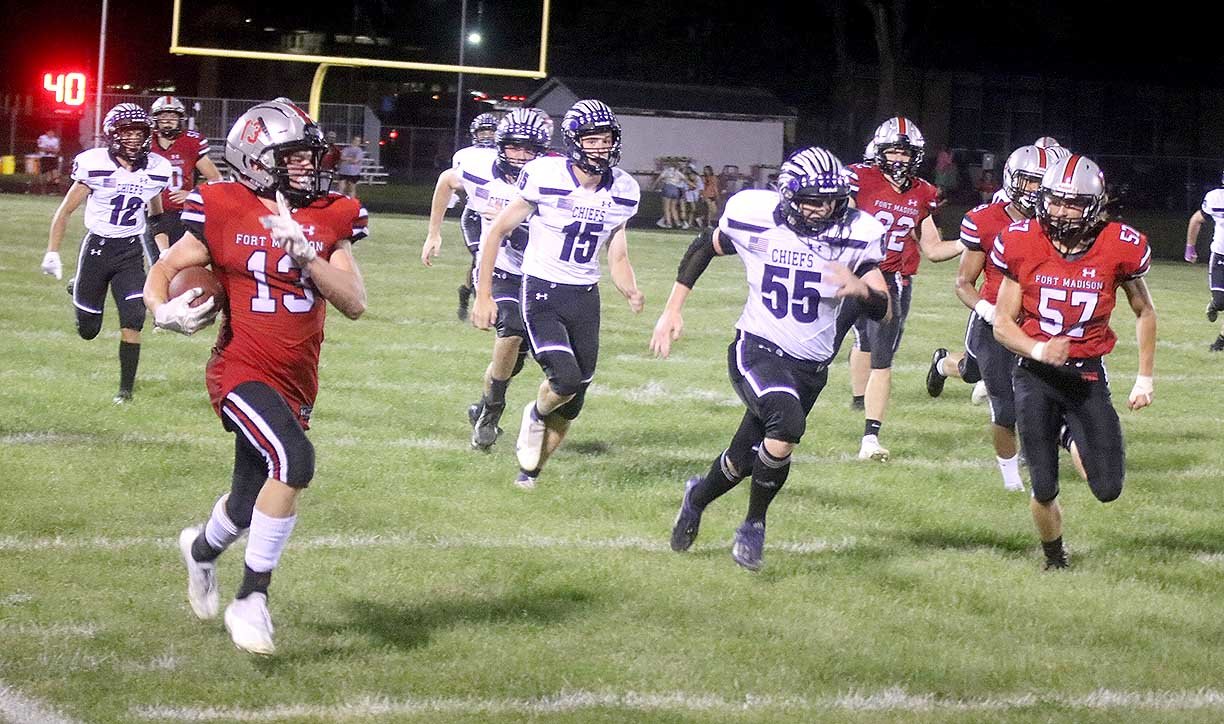 FORT MADISON - The Bloodhound football team put the cross county rivalry with Keokuk away in a big way Friday night.

The County Seat was carried out to midfield by the Hounds after they dismantled Keokuk 43-0 in a non-district matchup in Fort Madison.

The Seat stays in Fort Madison for the second year in a row and for four of the last five years. Keokuk took the Seat home in 2019.

Fort Madison has also started the year with a win for the fifth year in a row. The last time the Hounds lost a season opener was to Davis County in 2016.

"I'm a lucky man. I've got a great staff and they had a great game plan and had our kids completely dialed in. It was fun," he said without much voice left.

"That was us being us. Credit our kids and the coordinators and the whole coaching staff."

The Hounds dominated field position for most of the night with Xander Wellman keeping the Chiefs pinned with three touchbacks on kickoffs, one of which almost cleared the back of the endzone.

The first touchback to start the game pinned the Chiefs deep and then the Hounds defense didn't allow a yard on a four and out series.

Fort Madison would take their opening drive 39 yards for a score when Landes Williams rolled around the right side with some nice seal blocks and slipped into the endzone down the right sideline for a 14-yard touchdown to open the scoring.

Wellman would bury the Chiefs again at their own 20. Keokuk would get seven yards on two carries before senior Austin Ensminger wrapped up Equilius Lee for a loss on 3rd and 3 to force another punt.

Ensminger would be on patrol most of the night for the Hounds picking off two passes. He returned one for a 67-yard touchdown. He had another pick six for a score, but it was called back due to an illegal block in the first half.

"He's the hardest worker in the room at all times and he's silent about it. A lot of people would be mad at having that called back and would have bad body language," Doherty said. "That got taken away from him. But he flushed it and he came back and did it again. He's as cold as ice and we just love him."

Ensminger said he was prepared for the Chiefs running game, but kept an eye on the backfield.

"We kind of new they had a strong run game and we prepared for that, but I kept watching his eyes and watched where he was looking." the senior linebacker said.

After the Keokuk punt, Fort Madison again took over with good field position at the Keokuk 37. Williams would find his brother Kane on an 11-yard swing pass to the right for a first down. Then Williams would ramble for another 11-yard first down run, but the Hounds would get bottled up on the next set of downs forcing a 29-yard field goal from Wellman for 9-0 lead.

Keokuk got a chance at a return on the next kick, but Lee was brought down at the 22 of Fort Madison. The Chiefs' Bryor Lindner would then drop back and fire over the middle, where Ensminger grabbed his first pick and raced it back for a touchdown, but it was erased on the illegal block.

The Hounds took over at the 17 yard line after the reset, but couldn't get anything going and had to bring Wellman back out. But this time the kick sailed wide left.

Keokuk took over at the 20 and the Hounds defense forced a punt again. But Lee kept the ball on the punt and scrambled for a first down. On the play he hurdled a Hound defender and was flagged for it, but he had already past the first down marker. The yardage was marked off and the Chiefs got a fresh set of downs starting at their own 16.

Lee would break off a 20-yard run on 3rd and 10 to keep the drive alive, but the Hounds put out the fire. On 4th and five from the Hounds 45, Lindner tried a fake hand-off on an end around, but junior Tanner Settles sniffed it out and tracked Lindner down behind the line of scrimmage to give Fort Madison possession.

The Hounds would take over on downs and go 47 yards on nine plays capped by another Landes Williams score. On 3rd and 7, Williams had to roll out to the right looking to go down field and then took off through a seam down the right side and was tackled right at the goal line for the TD and a 16-0 Bloodhound lead.

Williams finished the night unofficially going 9 of 15 for 67 yards in the air and rushed for 84 yards and three scores.

Aside from a 28-yard run from senior Khalyl Tate, the Chiefs didn't have much offense the rest of the way. They would get eight plays in the next drive before Fort Madison snuffed it out and forced another punt.

Williams would scamper in from 20 yards on the sixth play of the next drive on first down to make it 23-0.

Neither team would score again in the first half.

Fort Madison received the kick to open the second half. Senior Tate Johnson took a squibber that bounced a couple times on the right side, made a move inside to draw in the coverage and then made a cut to the Hounds sideline, swiped away a couple of arm tackles and raced 81 yards for the score and a 30-0 game.

Keokuk would cough the ball up on the second play from scrimmage after the ensuing kick off and Jakob McGowan would get his first varsity touchdown on a carry from 2 yards out to get the running clock going.

Ensminger would wrap up the scoring with his 67-yard interception return in the 4th quarter to set the final score.

Junior Mateo Lozano anchored the line that had to deal with 6'5" 250 Trace Hackaday all night.

"We were stronger, we get lower and we were faster than them. We knew we could be better at that point of attack," Lozano said.

Williams said he was able to move around and read holes because of the work of the offensive line.

"We were really hitting on the running game because the line was making good holes. I did have to roll out a couple times, but then we started to click in the third quarter."

Of Williams nine completions five were to different receivers. He said that's part of the game plan.

"We space the field out and try to get to any number of guys that can go and make plays," he said.

Doherty said the Hounds were hiding a lot of emotion about the rivalry and he was proud of how the kids played and acted.

"We talked about this being a rivalry week 1, and this being a big game. We tried to down play it, but this was a big game for us as a staff and for the players and once they settled in it looked really good," he said. "I'm proud of our kids and how they acted tonight."

Doherty pointed to the play of sophomore running back Teague Smith and the defensive play of Mikey DiPrima, but he said the most selfless player on the field was Settles.

"This is a guy who's good enough to start at running back for a lot of other teams, but moves himself to the line and has a great night pulling and kicking out. Ike Thacher is another guy who has aspirations to be a receiver, but sacrifices himself and plays on the line and deals with guys like Hackaday. We are just so proud of those guys," Doherty said.

Kane Williams had three catches for 17 yards. Johnson had one catch for 26 yards and Henry Wiseman had a catch for 23 yards. Wellman and McGowan also had receptions for the Hounds. Smith had 10 carries for 51 yards on the night.

Thacher and Ensminger each had 6.5 tackles to lead Fort Madison. Henry Wiseman, Settles, and Daniel Sokolik each had five.

The Hounds (1-0) travel to West Burlington on Friday night. The Falcons lost 55-18 to Mid-Prairie on the road to open their season.