HTC rally comes up short vs. No. 4 WB 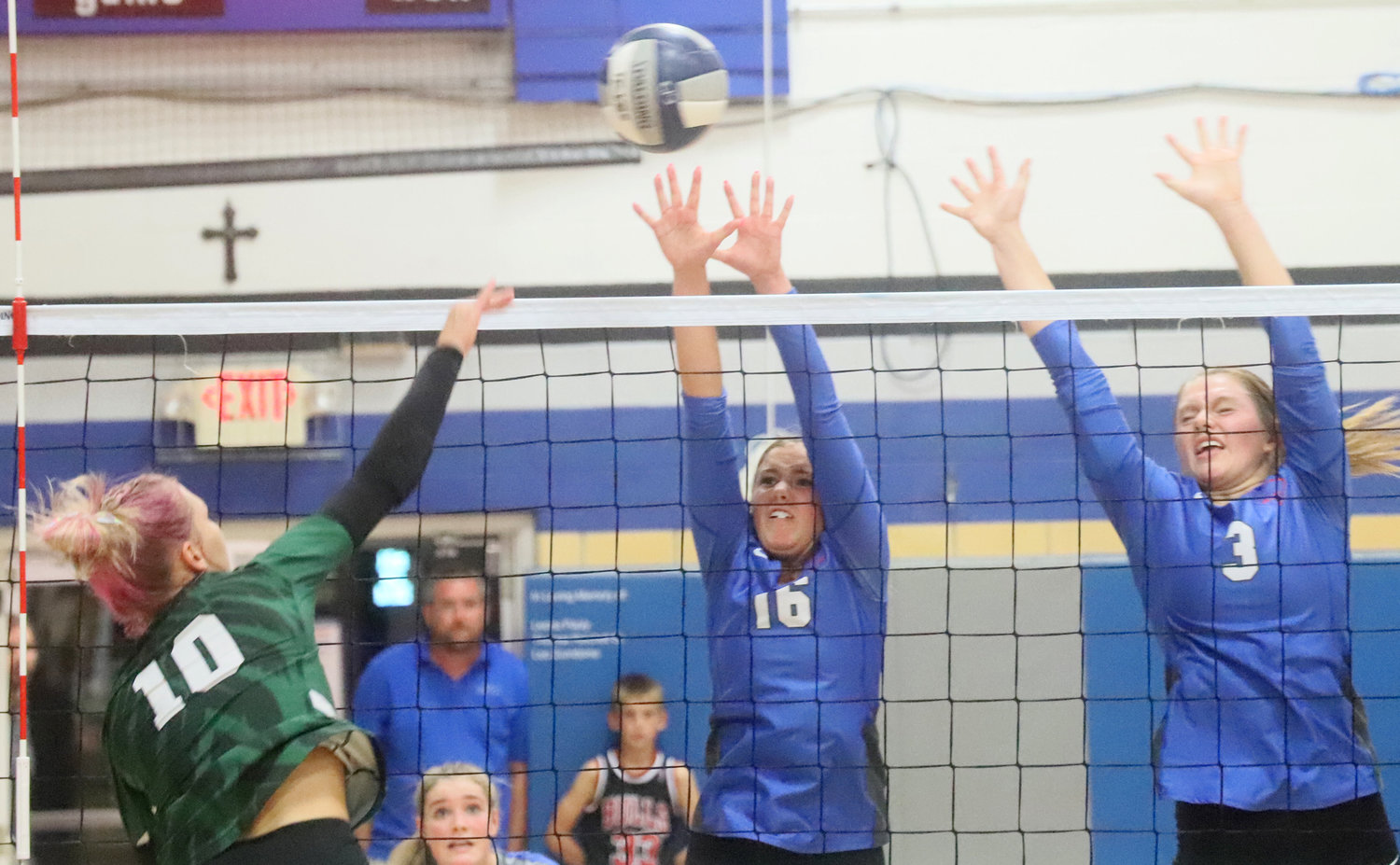 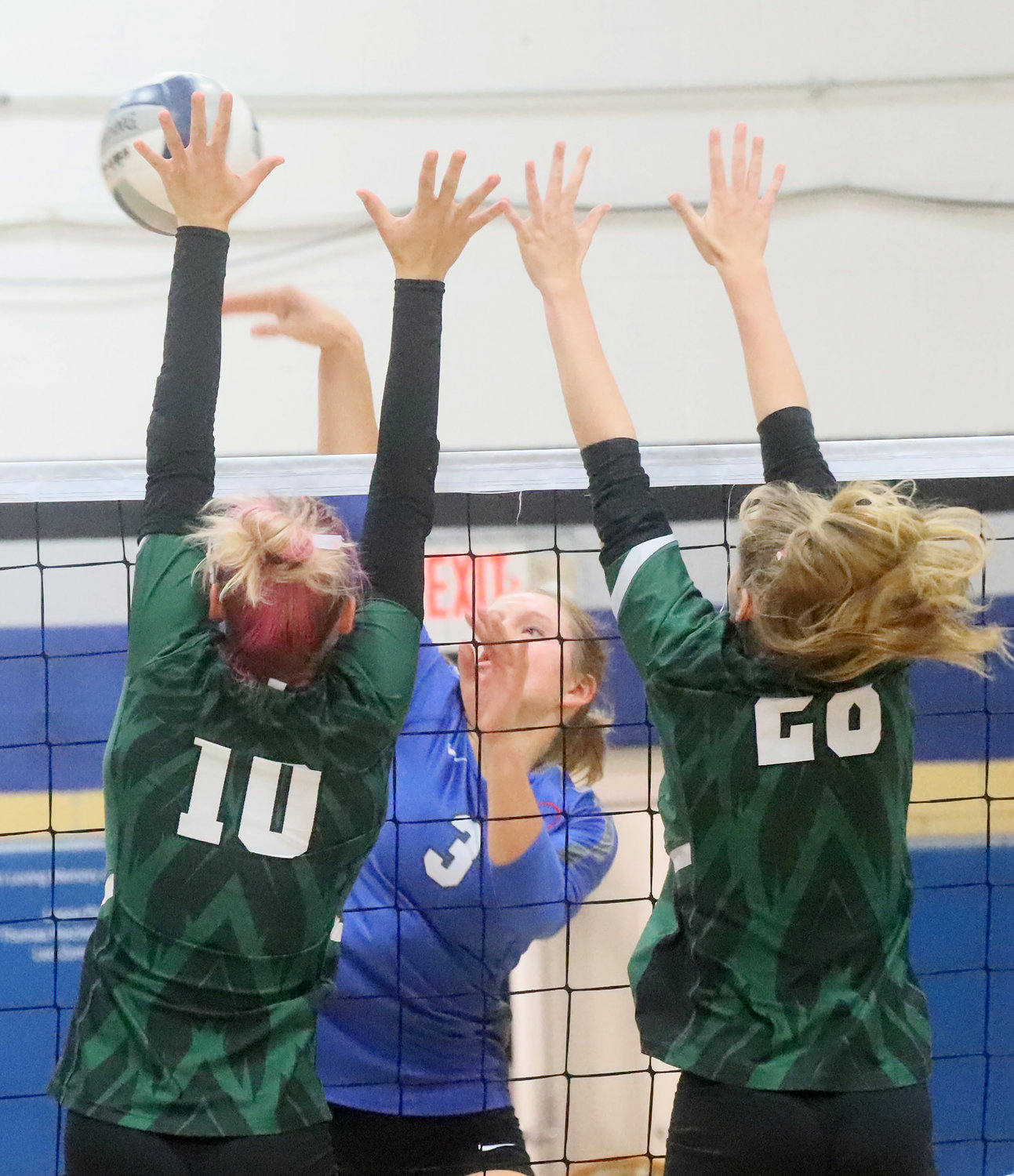 HTC's Kayla Box tries to shove an attack past the Falcon defense in the first set Thursday night.
Photo by Chuck Vandenberg/PCC

This is what we’ve been working for,” Myers said. “We’ve been working to come back, so we can show them that we can play the game.”
HTC freshman Presley Myers
John Bohnenkamp for Pen City Current Sports

FORT MADISON - The journey toward the biggest week of Holy Trinity’s season began with a loss.
But coach Melissa Freesmeier had a message for her team after Thursday’s five-game defeat to West Burlington.
“I know it’s frustrating when we lose,” Freesmeier said. “But we’re going to be OK.”
The 25-18, 18-25, 23-25, 25-20, 15-6 defeat to the No. 4 (Class 2A) Falcons was a sign, Freesmeier said, that her team is growing.
“I’ll tell you what, that team hasn’t been here all year,” Freesmeier said. “And I’m excited about where we’re going from here.”
“I think even though we didn’t take that win tonight, we got way better as a team,” libero Teagan Snaadt said.
“Every day we’re growing, we’re getting better as a team,” said freshman middle hitter Presley Myers.
The Crusaders (7-7 overall, 1-3 SEI Superconference South Division), ranked No. 11 in Class 1A, never wavered against the Falcons (16-2, 2-0) until the fifth game.
“I thought we kept our composure,” Freesmeier said. “I thought we did great things.”
The contributions came from everywhere, a sign that the Crusaders have created their identity.
“We’re figuring ourselves out,” Snaadt said.
Myers had her best match of the season, coming up with 15 kills, three digs and three blocks. Combine that with the career-high 10 kills from senior Kayla Box, who also had three digs and five blocks, and that was a formidable middle for the Crusaders.
“That takes a lot of pressure off our (outside hitters),” Freesmeier said.
Mary Kate Bendlage had 13 kills and Brooke Mueller had 10 kills from the outside.
Snaadt had her best match, with a career-high 27 digs.
“T is just getting better and better as we go,” Freesmeier said. “The trust is starting to come, and that’s a big thing. She’s running our defense, and doing a great job.”
Bendlage had 21 digs. Mueller had 18. Anna Bendlage and Taegan Denning had 10.
Anna Bendlage had her best match as she continues to develop as the Crusaders’ setter. She had 47 assists.
Bendlage was to be part of a 6-2 offense with Natalie Randolph, but Randolph’s knee injury has taken her out of the equation.
“She’s been a rock,” Freesmeier said. “She is just getting better and better. She’s growing up fast.”
The Crusaders have done a lot of growing, and they’ll need that confidence going into a week that includes their tournament on Monday, followed by the SEI Superconference tournament on Thursday and Saturday.
“Next week is huge,” Snaadt said. “All those teams we’ve lost to this season, we get a chance to come back and show them how much better we’ve become.”
“This is what we’ve been working for,” Myers said. “We’ve been working to come back, so we can show them that we can play the game.”
The Crusaders showed Freesmeier they can play.
“I’m telling you, this team is ready to battle.,” she said. “I’m just excited for what we’re going to do later.
“It’s a big week. If we can continue to build on what we did tonight, good things will happen.”