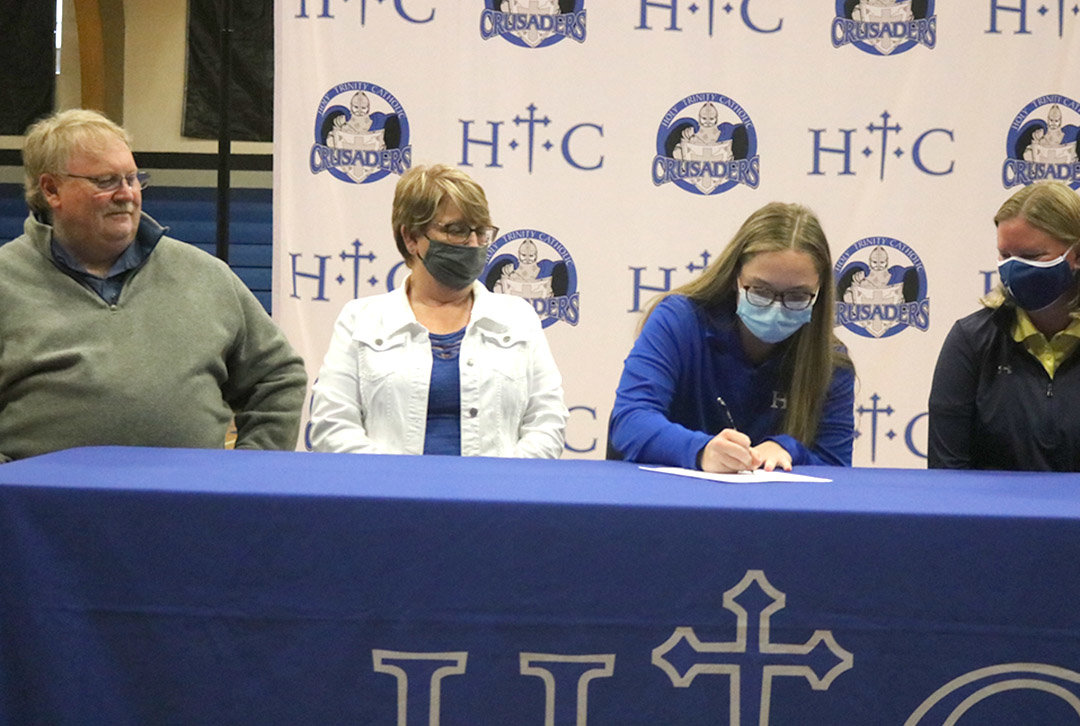 HTC senior Ali Robu signs her national letter of intent to play golf at Mt. Mercy University in Cedar Rapids Tuesday at Holy Trinity with her parents, right and new coach on the left. Photo by Chuck Vandenberg/PCC
Posted Tuesday, May 18, 2021 8:54 pm

Not only did the Crusader qualify for regionals after carding a 96 at Deerwood Golf Club in New London Monday, but she signed a national letter of intent to play the sport for Mt. Mercy University in Cedar Rapids on Tuesday.

Robu's 96 was fourth behind New London's Taylor Phillips and Sophie Mallott. Phillips shot a 90 on her home course for medalist honors, while Mallott was a stroke behind at 91.

Danville's Natalie Wilcox carded a 94 for third at the Region 5A competition at Deerwood.

Robu put up pars on Hole 7 on the front nine, and Hole 6 playing as the 15th hole on the 9-hole course.

She said the conditions weren't the greatest for scoring, but everyone was up against the same thing.

"First round of regionals was definitely pretty difficult conditions. Super rainy, super wet. I would say it rained or spit on us 14 of the 18 holes," Robu said.

"I ended up with a 96 which is alright - not the best I've had, but I'm satisfied with it. It got me in the top four and you had to be in the top six to advance."

The Region 5 finals will be played at New Sharon's Prairie Knolls Country Club, a course Robu is unfamiliar with but may play into her strength.

"I haven't been up there to play it yet, but I'm hoping to get up there before hand. Hopefully I'll have success and move on to state but I guess we'll find out Monday," she said.

The top six golfers will advance to the state meet at Ames Golf & Country Club.

"I've heard there are some blind t-shots where you don't have full knowledge of where you're hitting. I can hit longer drives so I want to use that to my advantage and be looking at a short second shot. It looks to be a pretty short course though," Robu said.

With the student body in attendance, Robu thanked them and the staff for the support.

"I've had a pretty good season and definitely felt love and support from the staff and the students. I'm excited to continue my athletic and academic career at Mt. Mercy it seems to be a great school."

Robu won the Southeast Iowa Superconference meet on May 10 with a 90 at Sheaffer Memorial Golf Course, the Crusaders home course, edging Phillips by one shot and Wilcox by six.