Johnson caps FMHS track career with 5th in 100 at state 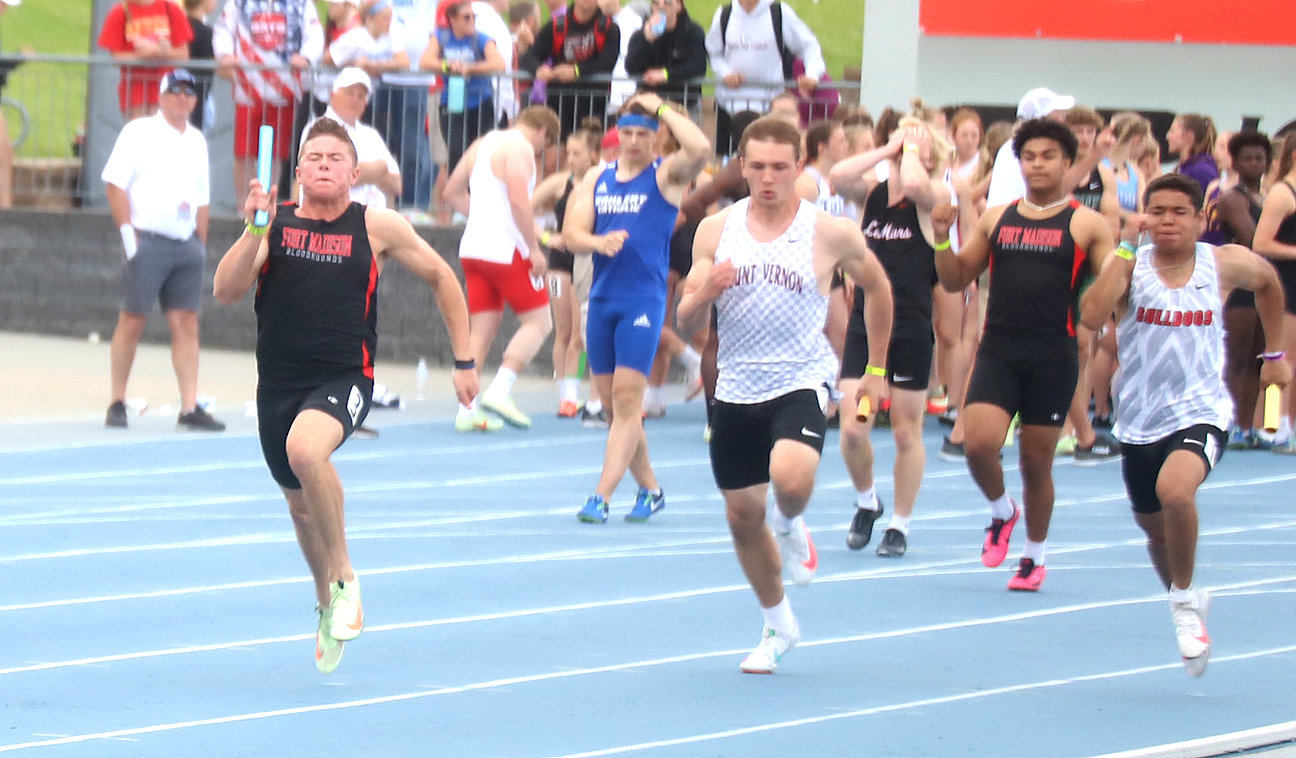 Fort Madison's Hayden Segoviano hands the baton to Tate Johnson on the final leg of the 4x100 preliminaries Friday evening in Des Moines. Photo by Chuck Vandenberg/PCC
Posted Sunday, May 22, 2022 11:08 am

Senior's 10.89 in Class 3A finals was his fastest time ever

DES MOINES - The old saying is you're supposed to learn to walk before you run.

For Fort Madison's Tate Johnson, it may have been a dead heat.

The senior capped a stellar high school track career with his fastest time ever in the 100-meter dash with 10.89 to finish fifth in the state in Class 3A at Saturday's IHSAA/IGHSAU State finals at Drake Stadium.

Johnson joined nine other local athletes, eight from Fort Madison and one from Central Lee, at the meet in Des Moines. It was his second time running at state and fourth running on the blue oval with two turns at the Drake Relays.

"Last year I was super nervous coming in here. I ran the 200 and 100 and I'm kinda glad I flushed the nerves out of my system then," he said. "I think I was more happy to qualify for the finals than place."

He said his previous runs at Drake helped him settle in for the this year's events.

"Mostly the experience and confidence has grown a ton this whole track season. But already running here helps a lot just knowing what it feels like on the track, and knowing you're facing all this great competition up here."

But state isn't a new experience for the Johnson family. Tate's mom, Tara, competed for the high jump title, while his father Tony ran sprint relays for the Hounds.

Johnson's mom Tara holds the FMHS high jump record at 5-5. Johnson said she still carries the nerves for the family. Tony's more laid back, for the most part.

"I think she's more nervous than I ever am when I'm racing," he said. "Everyone once in a while he'll let go, but mostly it's my mom."

Johnson has been competing he says, as far back as he can remember and has always been fast, but didn't really mature as a runner until his later high school years.

"I've always been fast as a kid. I was a bit underdeveloped as a pre-teen, but in my sophomore, junior, and senior years it hit and I kind of matured."

He said the FMHS Athletic Enhancement program focused a lot on his knee and hip mobilization. That was critical after Johnson suffered a hip injury his junior year.

The program has also been an important part of Johnson being a 3-sport all-state athlete. He's garnered state recognition in football, baseball, and track over the past two years.

"I've always been competitive and I hate to lose. I think track is different than others because it isn't always a team sport. Sometimes it's just all on me."

That spirit seems to have worked out well in the moments, but Johnson, who's committed to playing football next season at Central College with Landes Williams, his childhood friend and Bloodhound teammate in football, basketball, and baseball, said his passion is on the gridiron.

"Football is my passion. I love track but I wouldn't trade playing football for anything," he said.

But if the right conversation were had over track...

"It's still kind of up in the air. If they want me to, I might, just because I don't know if I want to let it go yet."

Johnson's finish was the highest placing of any the Hounds and Hawks. Senior Mikey DiPrima jumped 6 feet for ninth place. Another two inches would have gotten him a top 5. Central Lee junior Tom Eschman went 20-10.25 in the long jump for 10th place in Class 2A. FM sophomore Aija Jenkins leaped 5-0 for 13th in girls' 3A high jump.

Senior Raquel Schneider's 109.92 was 13th best in the state in the girls' 3A 400 hurdles and her second-best time of the year. The boys' 4x100 team of Julian Dear, Tate Settles, Hayden Segoviano, and Johnson didn't get out of the preliminaries, missing the top eight by .2 at 43.71 and losing about .3 off their qualifying time of 43.44.

Lexi Whaley threw her second best effort in the shot put at 33-8.5 and finished 23rd overall.