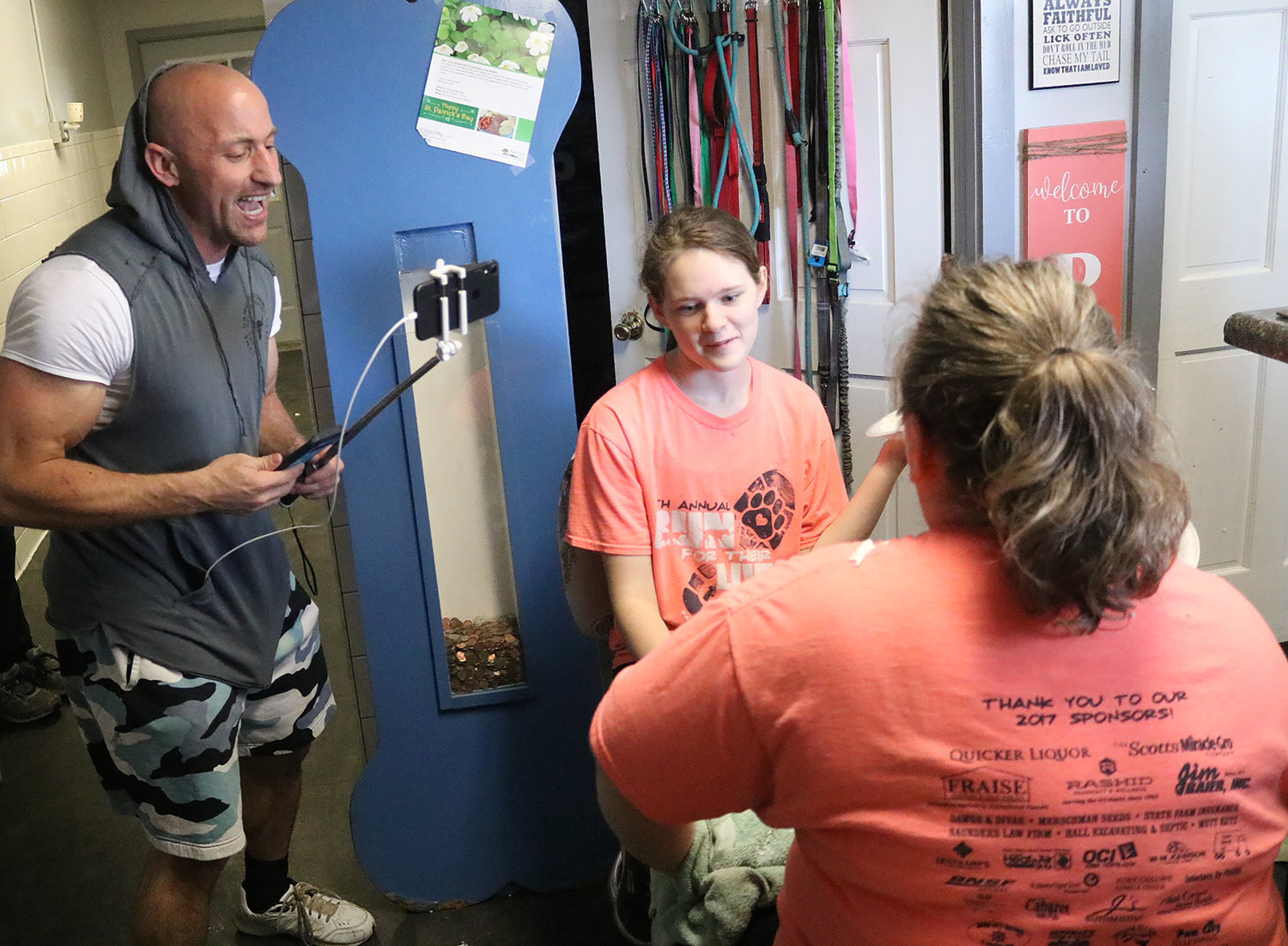 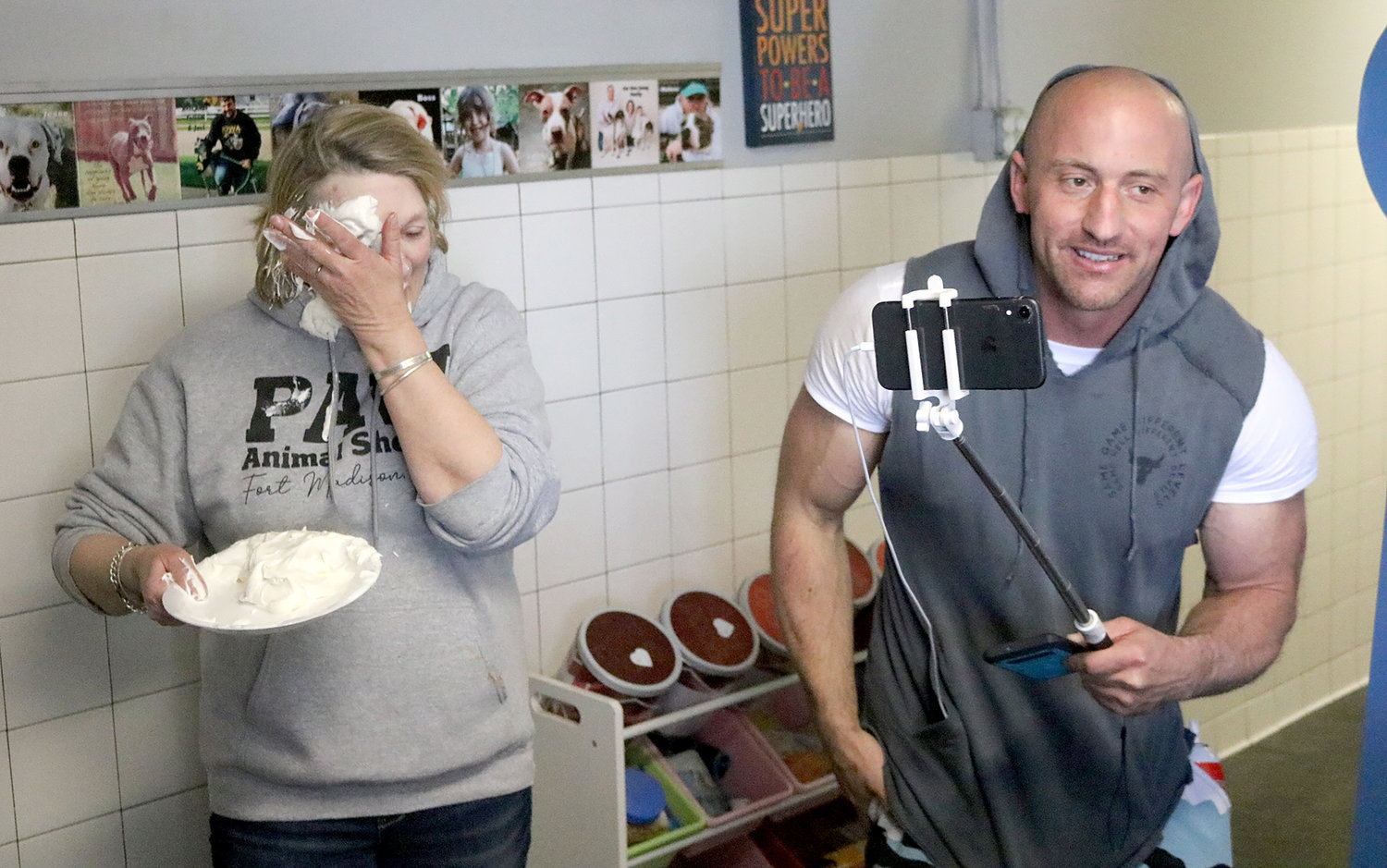 PAW Director Sandy Brown wipes whipped cream from her face as Kris Rotunda livestreams his Jordan's Way event in Fort Madison in March of 2021. Jordan's Way is back at the shelter again on Monday with a fundraising goal of $125,000.
PCC file photo

Funds to go to new shelter

The shelter will be wonderful for this community and the community has worked very hard to make this happen. We've done it with their help and those around us and the help of God. He has been a big part of this and you can quote me on that”
Sandy Brown, PAW Director
JORDAN'S WAY

The PAW animal shelter will once again be the site of the zany Jordan's Way fundraiser livestream Monday from 10 a.m. to 2 p.m. in Fort Madison. PAW Director Sandy Brown has set a goal of $125,000 this year. The event raise nearly $40,000 last year and was the third highest fundraiser for Jorday's Way in the country in 2021.

FORT MADISON - Kris Rotunda helped raise close to $40,000 in March of 2021 for the Fort Madison PAW Animal Shelter. This year he wants blow the roof off the place.

Rotunda's Jordan's Way program is a 4-hour live video blog in a zany format that has no agenda but to raise funds for animal shelters across the country.

In 2021  the PAW Shelter, under the direction of Sandy Brown and at the direction of Rotunda, raised $38,000 in four hours which was the third highest amount raised in the country in the Jordan's Way program.

That third place didn't sit well with Brown. Not at all.

The funds will go toward a monster project. The PAW organization is in the middle of planning the construction of a $6.8 million new shelter just north of the current facility on 48th Street in Fort Madison.

Rotunda will be back on site with his livestream from 10 a.m. to 2 p.m. Monday, Aug. 29th and Brown is inviting everyone to come out and be part of the madness.

"He's challenged us to raise $100,000 in 30 days and we can raise that money through 2 p.m. Monday," Brown said. "That's pretty exciting. It's just a circus. Everyone come out between 10 and 2 ,bring donations and take a pie in the face. It's just fun. We're going to raise as much money as we can possibly raise. Other spontaneous events and challenges take place throughout the four-hour session.

Rotunda picks shelters in all 50 states for the Jordan's Way program and those that do well have the option of having him come back. Fort Madison was the top fundraiser in Iowa and now Brown has her sites set on being the best in the country.

"I want this community to be the top dog," Brown said. "And we're gonna do it. But we need everyone to come out and be a part of it. The people of this community and in the counties surrounding us, Clark, Hancock, Des Moines, Henry, Henderson, and people in New Jersey, New York, Texas, anywhere where our pets have gone, they've supported us."

Brown pointed out that the shelter receives no tax dollars for operations and all revenues that come into the shelter are from private donations and a few grants.

Anyone making a donation of more than $50 will get a blue Jordan's Way T-shirt and Brown said everyone is asked to wear their shirt on Monday.

The Fort Madison Fire Department, Police Department and Lee County Sheriff's Department will be onsite and having a contest to see who can raise the most money in the four-hour period with the winner getting a trophy that may have to be defended in 2023.

Brown said she knows the shelter is at a disadvantage by being one of the first shelters that Rotunda is visiting this year, but she said that's why she's setting the lofty goals so that no one, even though they know what the bar is, will be able to outraise the PAW Shelter.

Brown shaved her head last year when the shelter went over it's fundraising goal, and she said this year when they get to $125K others will determine what she will be required to do. She said she is open to just about anything civil...except a tatoo.

She said fundraising started on Aug. 1 and the shelter is doing really well and she has no doubt they will reach $100K by 2 p.m., but said energy will stay high all the way through 2 p.m.

"We have a $6.8 million shelter to build," she said. "The shelter will be wonderful for this community and the community has worked very hard to make this happen. We've done it with their help and those around us and the help of God. He has been a big part of this and you can quote me on that."

The name for the program came from Rotunda's dog Jordan who he lost after 11 years to cancer. Jordan was a 3-year shelter dog before united with Kris. Jordan was a Bull Mastiff, German Shepherd, and Samoyed mix.

Jordan's Way can be found on Facebook at https://www.facebook.com/jordanswaytour

The four-hour livestreams are watched by people all over the United States. Brown said businesses can bring a check out and their name will be mentioned in a "shout out" on the livestream. Business owners can also stick around for a pie in the face that will be captured in the livestream.

Donations can also be made at anytime up to the 2 p.m. deadline on Monday. Donations can be made now online at https://www.facebook.com/Pawfortmadison

Look for the Jordan's Way page feed and click the donate button. Or drop a check or donation by in person at 2031 48th Street before or during the event.