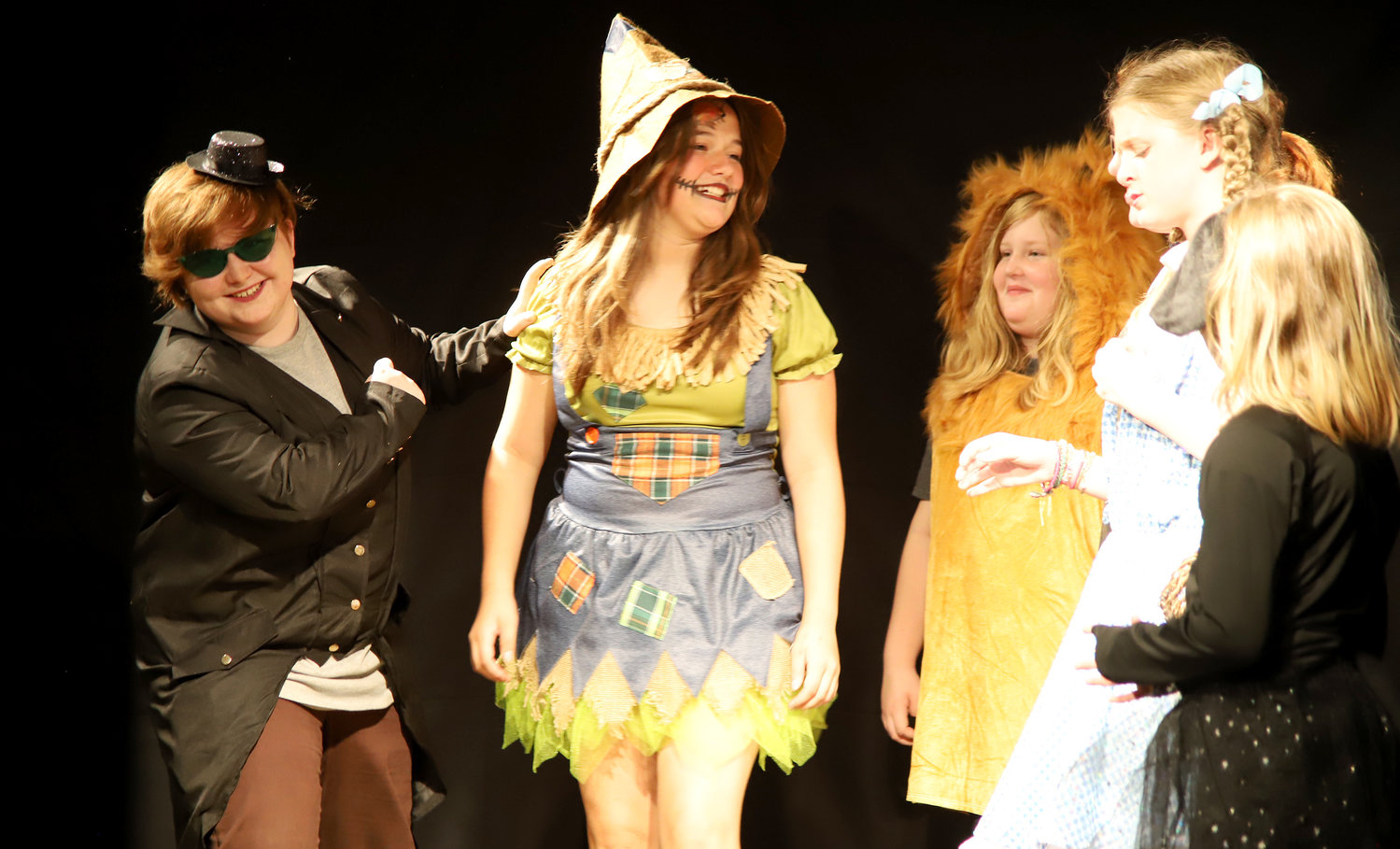 Oscar Bauswell helps out Scarecrow, the Cowardly Lion, the Tin Woodsman, Dorothy, and Toto in The Wizard of Oz Monday night at the OFP's dress rehearsal for the summer youth production. The shows kick off July 29 in Fort Madison.
Photo by Chuck Vandenberg/PCC 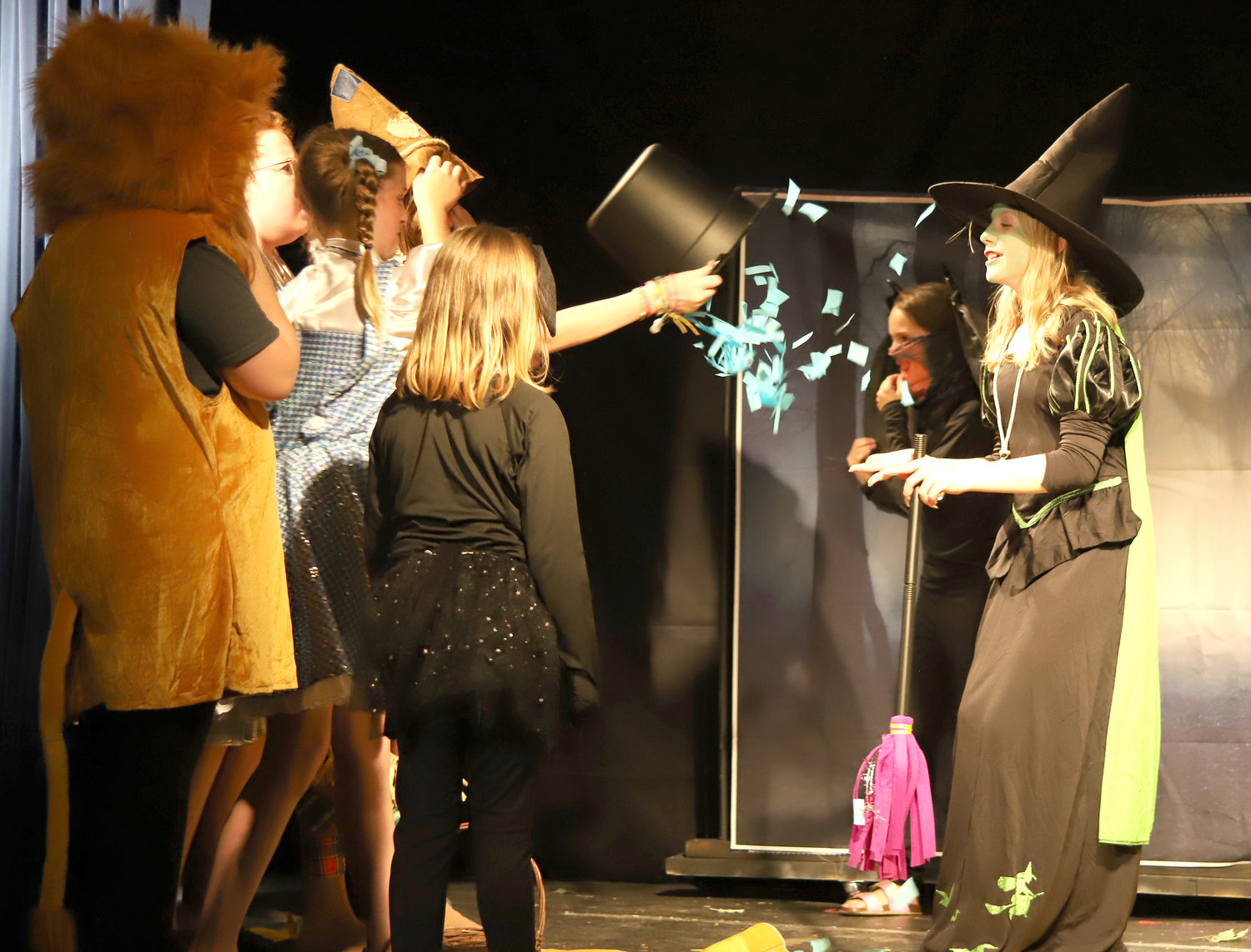 Dorothy, played by Sunshine Zioui, throws a bucket of confetti "water" on the Wicked Witch, Aubrey Davis, in a dress rehearsal of The Wizard of Oz Monday night at Old Fort Players in downtown Fort Madison.
Photo by Chuck Vandenberg/PCC 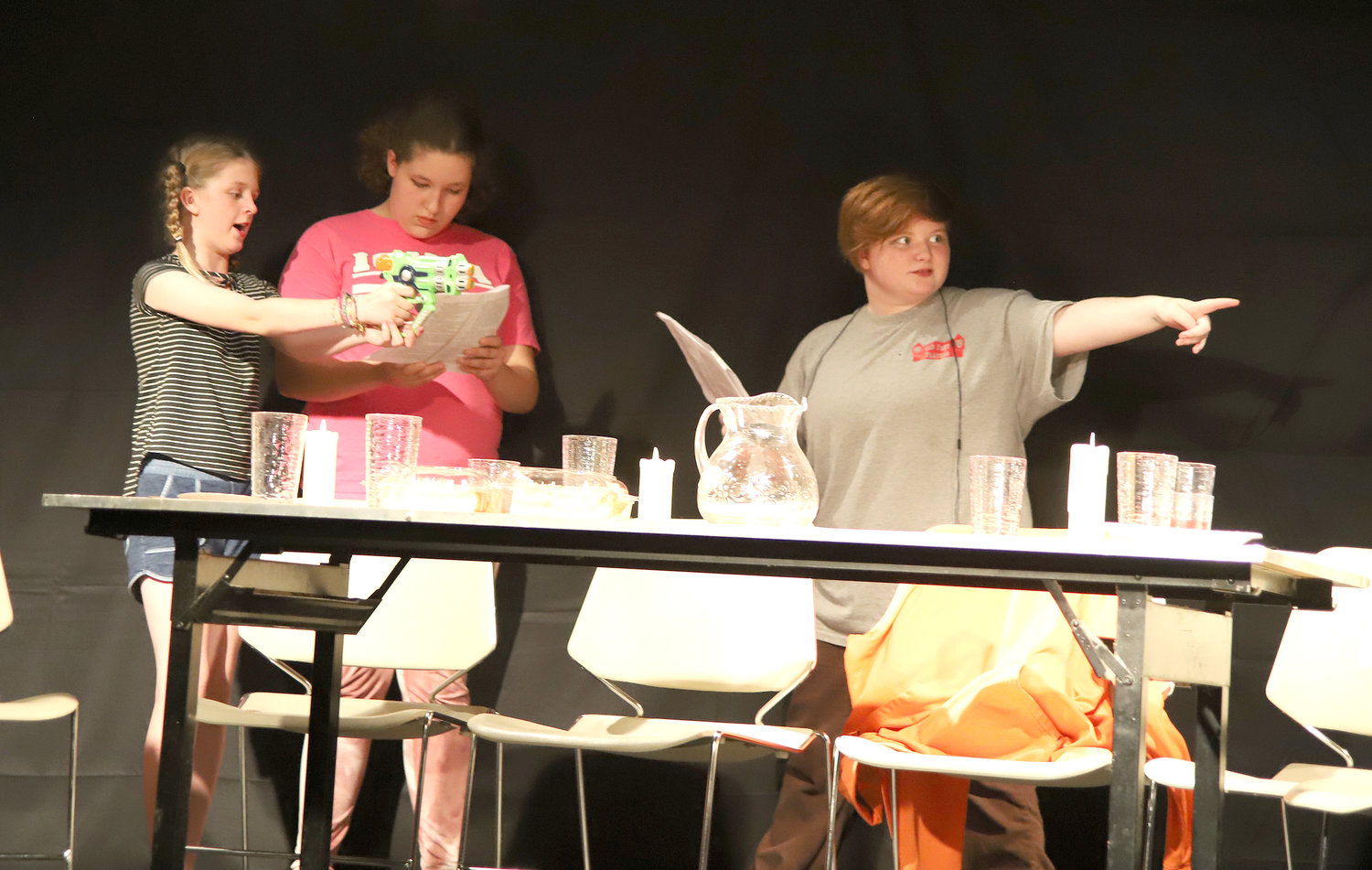 FORT MADISON - The annual summer youth production at Old Fort Players will kick off July 29 in downtown Fort Madison.
A full cast of the city's youngest thespians takes the stage for a truncated version of The Wizard of Oz and A Very Cold Case.
The timeless The Wizard of Oz clearly has the children's energy levels at full throttle. Sunshine Zioui plays the disillusioned Dorothy and Allema Kellum putters around without lines, but a critical role in revealing the Wizard, as Toto.
Zioui is incredibly good with lines and bringing some inflection to the role. Youth programs at times struggle with lines, but Dorothy comes off clean and well-rehearsed.
Isabelle Pranger takes on the role of the Cowardly Lion with ironic courage. Veronica Pranger plays Auntie Em. Pieper Terrell plays the Tin Woodsman and Sofia Gilbert is a bold Scarecrow.
The scenes fly by as if in a tornado and we quickly get to the heroics of the unveiling of the Wizard, the dismantling of the Wicked Witch played by Aubrey Davis, and the awakening of Dorothy and Toto back on their provisional Kansas farmstead.
Macy Anderson plays Glinda the good witch, while Oscar Bauswell belts out the commands of the frightening, but affable Wizard of Oz, restoring the hearts and minds and courage of the do-gooders of Oz.
After a brief 15-minute intermission, the stage is changed and the kids go into a more mature rendition of 'A Very Cold Case" in which a couple teenage girls missing for 15 years are reunited under the direction of a sleuth named Reggie Rathbone, a character eerily similar to Sherlock Holmes of old.
In an odd twist, the actor who played Sherlock in the 40s and 50s radio and cinema productions was named Basil Rathbone. But Xandra Abel smashes as the overachieving detective and is able to bring the cast together right along side the movement of story originally done by playwrite Craig Sodaro.
The United Way of the Great River Region is Executive Producer for this year's youth shows. Richar Abel is the director of the production.
The show goes on July 29 and 30th at 7:30 p.m. and Sunday, July 31 at 2 p.m. Tickets are $8 for adults and $5 for seniors and can be purchased by calling 372-9559 or visiting the OFP Facebook page at https://www.facebook.com/oldfortplayers.