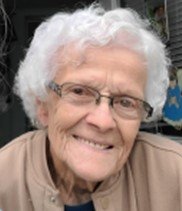 She was born on April 7, 1933 in Niota, IL to Leonard and Mabel Brakeville Six.  She married Morgan Cooper and they later divorced.  Sue worked as a waitress at Flora Thumbs in Niota and Wilkens Drug and Grille Store Café.  She then worked as a clerk at JCPenny for twenty five years. She was a member of Union Presbyterian Church. Sue loved doing yardwork and spending time with her family.  She was the last of eleven children.

Per her wishes, cremation has been entrusted to King-Lynk Funeral Home & Crematory. A graveside service will be held at a later date at Hillcrest Memorial Park Cemetery in Ft. Madison.

Online condolences may be left at www.kinglynk.com.