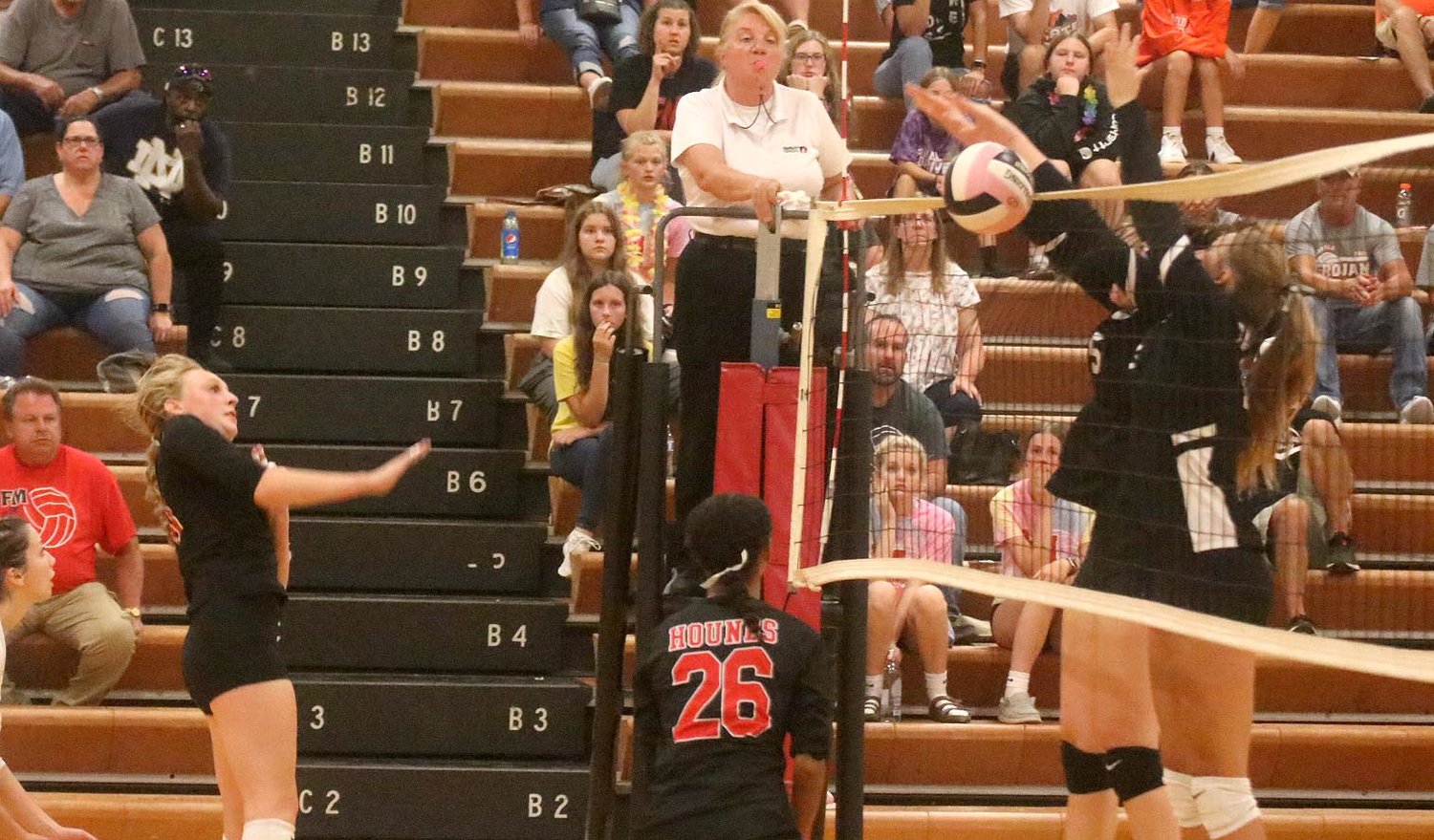 Fort Madison senior Anna Lynk goes up for an attack from the left hand outside hitter spot Tuesday night against Fairfield in Fort Madison. The Hounds loss 1-3 and fall to 0-2 in the Southeast Conference. Photo by Chuck Vandenberg/PCC
Posted Wednesday, September 8, 2021 6:00 am

Knustrom is in her first year with the Fort Madison volleyball after coming over from Holy Trinity Catholic last year.

She said the girls are inexperienced, but are making strides each time out on the floor including practices.

"We have grown so much even from just our last match a week ago in Keokuk," Knustrom said. "I see them doing a lot of good things. I can tell the things we're working on in practice are improving."

Fort Madison jumped out to 12-3 lead in the first set on three straight errors at the net by the Trojans behind senior Anna Lynk's 4-8 hitting.

Fairfield would only get within six points of the Hounds in the first set at 23-17, but two back-to back points by Lynk at 23-18 would give Fort Madison just their fourth set win in 17 sets played to date.

The Hounds lost the momentum early in the second set getting down by four at 6-2. They battled back to within 1 at 8-7 when Trojan sophomore Maya Lane's attack went wide. Fairfield would regroup and stretch the lead to eight at 22-14.

Fort Madison then cut it back to three on a four-point run with Eve Ruble serving, all on Fairfield return errors. Another Lynk kill cut the lead to 20-23, but a kill and an error would allow the Trojans to tie things up a 1 set apiece

The third set was a highlighted by 10 ties and five lead changes, but the Hounds would get hung up out of an 18-18 tie, and Fairfield would take the next seven points with Hannah Bergren serving. Bergren would record an ace in the run, and the Hounds would rack up four errors to surrender the set.

"I think it was just a little bit of we came out with so much energy. They were so ready to play," Knustrom said.

"We had a great crowd and a great student section and great support from the community. They were hyped up, now the challenge is maintaining that into games two and three."

Fort Madison got down early again in the fourth set by as much as four at 8-4, but battled back to tie things up at 10 with Madison Pirri serving. A Fairfield kill got the sideout at 11-10 and the Trojans would run away with the set and match from there.

Knustrom said even from a week ago, she can see some of the drilling and practicing taking hold in the games.

"We have grown so much even just from our last match at Keokuk. I see them doing a lot of good things and I can tell the things we're working on in practice are improving," she said.

The Hounds were swept by the Chiefs on Aug. 31 in the conference opener at Keokuk.

"There are some minor details we have to work out like reading their hitters a little better and making some mid game adjustments. But as a whole I'm super proud of the way they played," Knustrom said.

"I feel like we gave up the third game and the fourth game we could have come back down 15-20. I thought they fought back and that's part of what were trying to build is that mindset that we're not going to give up."

The Hounds don't yet possess that big swinger at the net, but Knustrom was quick to add, the Hounds do other things well and they just have to learn where the spots are.

"We just talk about trying to be smart in what we do. In practice we talk about moving the ball around and using all the hitters as much as we can," she said.

"Our setter Molly has only been setting for about a month. And yeah, I'd like to get our middles more involved at some point. That will be huge, but for now we have to be smart. You don't have to hit it hard, just hit where they're not."

The Bloodhounds travel to the Linn-Mar Invitational in Marion on Saturday.