Lee County Fair back at it after pandemic pause 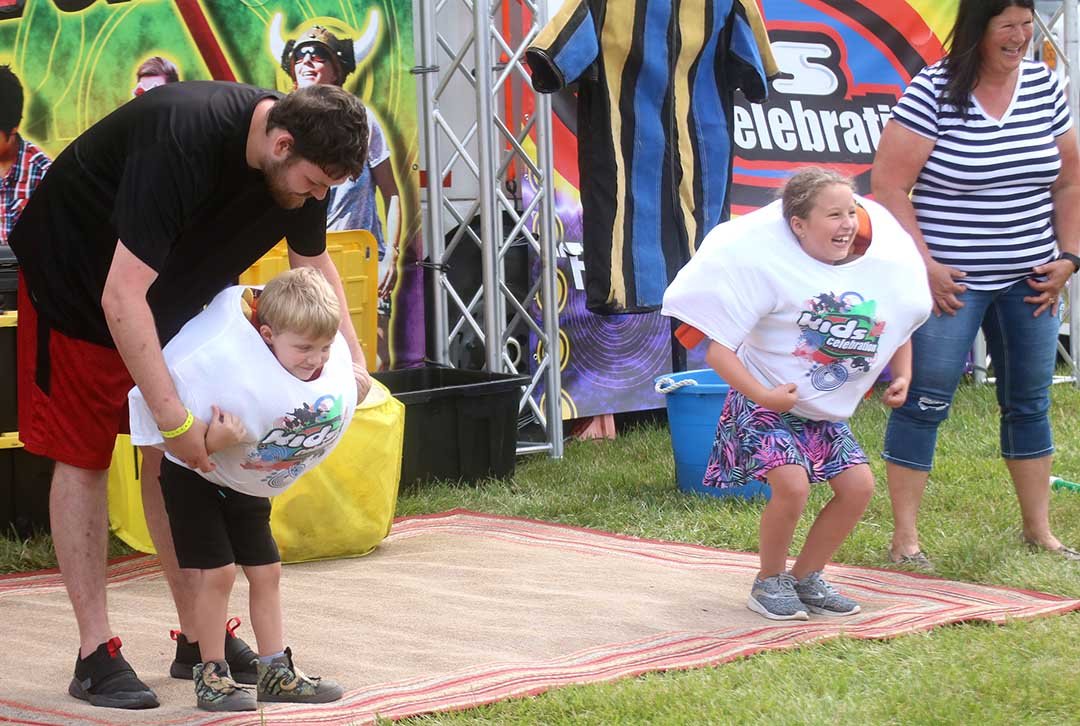 Four-year-old Aaron Monroe, of Alexandria, Mo, flexes his squishy muscles as part of the Kids' Celebration Family Show on the grounds of the Lee County Fair in Donnellson Thursday afternoon. Photo by Chuck Vandenberg/PCC
Posted Friday, July 9, 2021 6:00 am

DONNELLSON - The Lee County Fair was bustling Thursday afternoon after a record-setting Wednesday night for the fair crownings and motorcross shows.

Wellman will represent the county at the Iowa State Fair in August. She is the daughter of Deb and Dusty Wellman and will be a senior at Central Lee High School.

This first runner-up is Sidney Jones, while the second runner-up is Brianna Gruntmeir. Brianna also was named Miss Congeniality.

Board member Brock Westfall, who was the fair board president in 2019 said the fair board picked up where it left off in 2019, and said sponsors and contractors couldn't have been better in dealing with the pandemic.

"Last year was disappointing. We did have it for the kids just for the livestock and that's the most important thing," he said.

"The vendors last year, the Monster Trucks people, and bands all pushed their contracts back a year so we weren't out any money except for the upkeep and the things that we had already purchased."

Westfall said most sponsors just told the fair board to keep the sponsorship funds to help offset losses from having to shutter the rest of the fair in 2020 due to the pandemic.

He said if the weather holds up, attendance could set records for the week based on what he saw Wednesday night.

"This year it's been great. On Wednesday night we had a great turnout for the motorcross show. The rain put us off a little bit, but it was probably the best Wednesday night we've had since I've been here," he said.

"We anticipate good attendance, but we can't control the storms and stuff."

Westfall is a board member who served the last five years as president. This year he said he's still as involved, but not running the show.

This year's main features are the Monster Truck shows, which took place Thursday night with a family theme that included a candy dash, bike giveaway and $1 hot dogs. The fair board also added ice cream sales in the grandstands this year.

Monster Trucks return for a second show on Friday night, before the Demolition Derby thrills fans on Saturday night.

Westfall said in 2019 there weren't as many trucks, but bigger names. This year the board went with more trucks instead of the bigger names like BigFoot to avoid a shortened show. In 2019 two of the trucks suffered damage and couldn't continue.

"We increased the number of trucks because two years ago we had some breakdowns. We got rid of BigFoot this year and went with a higher number of cars so we hope that doesn't happen again."

The Wednesday rains created quite a bit of work for track crews to get the track ready for the Monster truck shows, so Westfall said he's hoping more rain stays away.

"We've had quite a bit of rain out there and they're doing a lot of work on the track. But we hope to have a great turnout. There is a chance of rain tomorrow, but we're hoping for the best."

Thursday was Senior Day sponsored by the Kensington, with senior oriented programming including BINGO, health booths, and free ice cream. It was also the first Thursday in a while where a live band was in the entertainment pavilion after the grandstand event.

Friday is Southeast Iowa Regional Medical Center and Blessing Health Keokuk's Kid's day featuring an afternoon of kids' activities including schoolhouse crafts, face painting and the Med Force Helicopter scheduled to be onsite. Kenny's Funland Carnival opens at 1 p.m. daily through Saturday and closes at 10 p.m. Kids can get unlimited rides with a $25 armband starting Friday.

The traditional livestock shows run throughout the day each day in the show barn. The VanWinkle Chess Tournament is held on Saturday starting at 9 a.m. in the Learning Center kicking off a day that wraps up with the Demolition Derby in the grandstand and the Kids PowerWheel Derby starting at 7 p.m. The Devin Clemons Band takes over in the Entertainment Pavillion following the show.

A full schedule of the week's events is shown below.