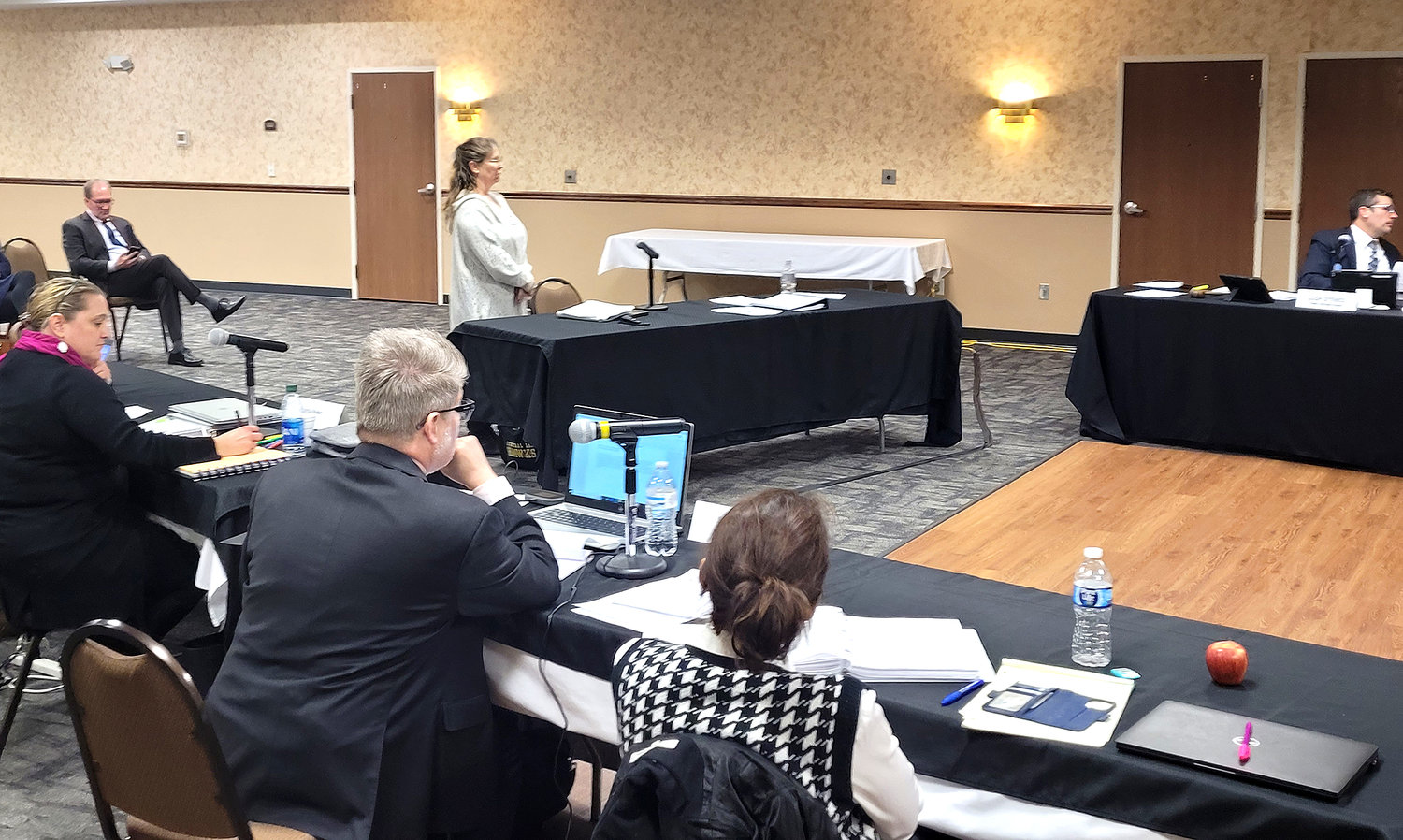 Lee County resident Coette Gida is sworn in prior to giving testimony Tuesday afternoon at Quality Inn and Suites in Fort Madison. Gida testified in the IUB's eminent domain docket with the Iowa Utilities Board.
Photo by Chuck Vandenberg/PCC
Posted Wednesday, January 11, 2023 6:24 pm

The Iowa Utilities Board held a formal hearing at the Quality Inn & Suites Monday and Tuesday late into the evening to gather information and listen to the pros and cons of using eminent domain to allow the construction of the pipeline.

Coette Gida, representing herself and her mother Margaret Strunk, along with John Menke Hayes, representing his eight siblings in property owned since Lincoln was president, made their  case to the IUB to oppose NuStar Energy L.P.  taking of their property to build an anhydrous ammonia pipeline around Lee County to the Iowa Fertilizer Co.

The two properties are located just north of the Hwy. 61 bypass on both sides of Hwy 103. Hayes, a physician from the Chicago suburbs, questioned NuStar officials heavily Monday and then took the stand himself on Tuesday,

Hayes said the state already disected his family's property with the construction of the bypass, eliminated the family's original homestead on the south side of the property where the south lanes of the bypass intersect 103.

Hayes' most pointed testimony came as follow up to submitted written testimony he filed in the case docket prior to this week's hearing.

IUB board member Joshua Byrnes, who served as IUB's administrator of the hearings, referred to written statements where Hayes said his family was strong armed by NuStar's contracted land agents, JCG Land Services out of Nevada, Iowa.

"Have you been strong armed by NuStar," Byrnes asked Hayes.

Hayes said statements were made by the land agents to his brother Steve, who manages the property for the nine siblings.

"The comment from JCG,  'We're not going anywhere.'  was stated to my brother Steven."

Byrnes clarified that the statement precipitated Hayes' assessment of being strong armed.

Hayes said the statement also references two other exhibits that were entered into evidence in the docket.

He said there are two different ways to interpret the statement with one being the landowners don't have an option, or that the land agents were just letting them know they would be around if they needed  anything.

"I can tell you that it was interpreted as the former," Hayes said.

Byrnes also pointed to Hayes' argument that the pipeline would disrupt the regional delivery cycle.

NuStar responded saying the pipeline will allow IFC to increase production, which would allow IFC to grow regional delivery.

Hayes said it's a fascinating discussion to consider potentially pumping anhydrous to IFC from another facility, slap a tariff on the produced fertilizer knowing it could be produced at a substantially reduced rate at IFC.

Hayes said the state should reject NuStar's petition for the pipeline until the state or federal government limits the diversion of fertilizer use, but Byrnes asked what authority the IUB had in taking that action.

"It doesn't serve a public purpose as defined in Iowa code, to ship anhydrous ammonia out of Iowa....which does not serve the public purpose," Hayes said.

Gida said she was also told that the state has the right to take her property if an easement agreement isn't reached and no compensation would take place at that point.

She also said pipeline construction crews will be utilizing a private drive to get equipment into the construction zone as well as storing equipment on her grazing pastures.

"Not only are they gong to come down my driveway and down my hill. At my mom's they are using her driveway as an entrance for the permanenent easement entrance and we don't know which way they're going to go from there," Gida said.

She said she has been trying to get one answer from the pipeline officials and the IUB and she hasn't gotten that answer, which is how will the pipeline impact her plan on becoming an organic livestock producer.

A spokesperson with the IUB said no ruling has been issued in the docket at this time.

"The IUB will review all the information, testimony, evidence, and exhibits from the hearing and will issue a final decision in the docket," said Don Tormey, IUB spokesman.

Tormey said the decision will come in the form of an order that will be filed in the docket.

Exhibits and testimony from the hearing will be added to the docket in the next month to month-and-a-half.