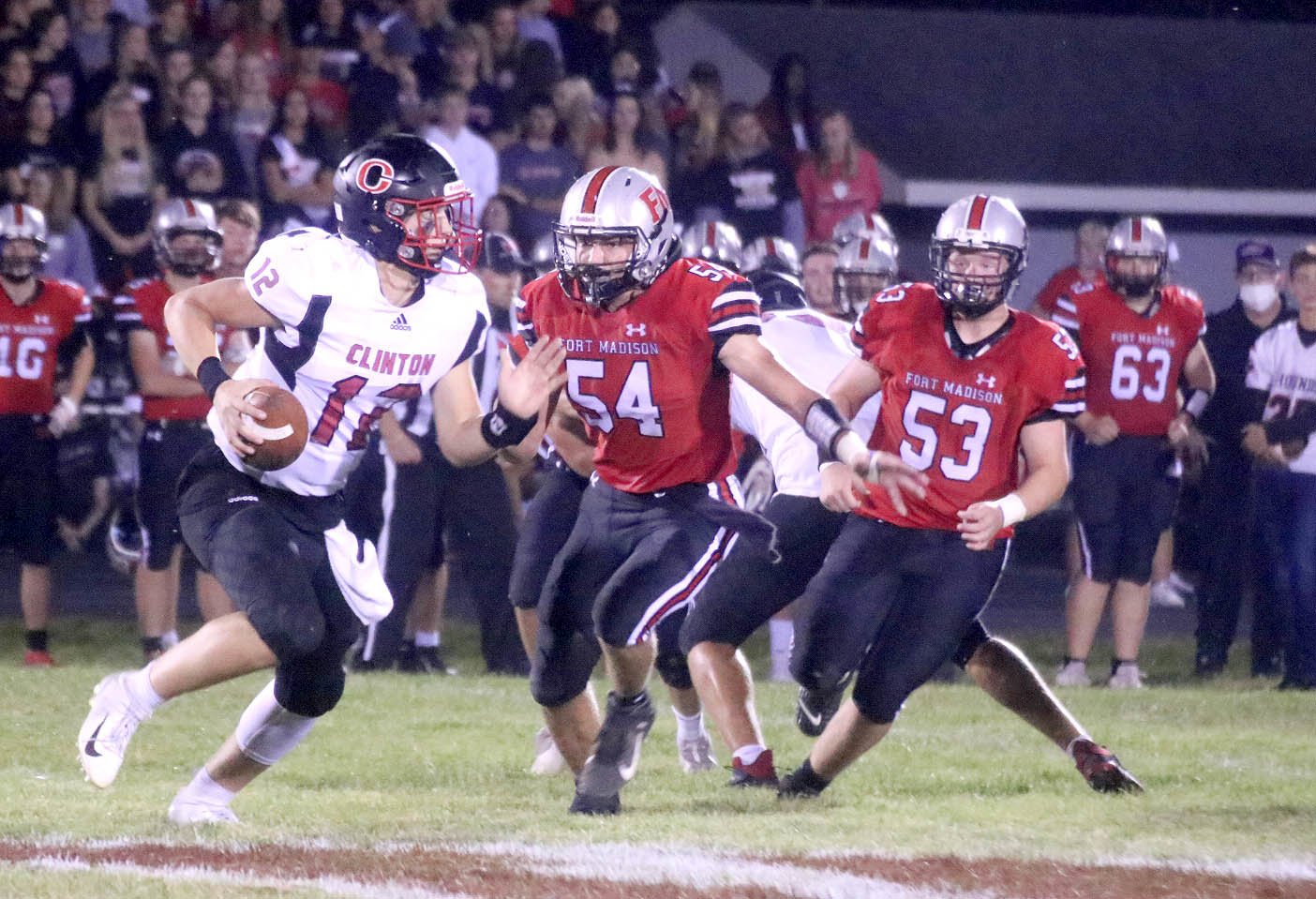 On Friday, McGowan ran north and south, east and west, and up and down, as Fort Madison took out Clinton on Homecoming 58-14 to improve to 6-0 on the year and 2-0 in District 4A-3 play.

McGowan broke off an 84-yard, third quarter run on 2nd and 10 from the Hound 5. He got the ball on a read from quarterback Landes Williams and raced to the River Kings sideline where he got a nice seal block from Tate Johnson turning the corner. McGowan then cut inside the block and then back to the sideline where he raced to the Clinton 12 before getting caught from behind.

The run set up a 5-yard touchdown pass to Johnson to give Fort Madison a comfortable 44-17 lead.

"We talked that we had some cut back lanes and if he'd hit 'em he'd still be running and he knows it. I think he's getting better and better each week, and understands more. He's very dangerous," Doherty said.

McGowan finished with 196 yards and a score on the night, by far and away his best night of this high school career. He said it was break out night for him.

"I feel like it was on offense. I was seeing our pulling guard and he was doing a good job of making a hole and and allowing me to get good yards. On that big play, I ran out around the end where Tate had a great block and I was able to cut in and then get down the sideline," the senior said.

Williams, Kane Williams and Johnson were the other big offense factors in the game. Landes Williams threw for 273 yards and four touchdowns, and ran for another giving him 25 on the year.

Kane Williams and Johnson each scored two touchdowns through the air. Williams scored on a seam route up the middle for a 62-yard strike to open the scoring on the Hounds' third play from scrimmage.

Clinton would tie the score on a nice 14 play, 80 yard drive capped by Jai Jensen's two yard plunge to tie things up and quiet the packed south side of Richmond Stadium

Fort Madison would get a couple first downs on the next series, but would settle for a 28-yard field goal from Xander Wellman.

Clinton would respond when Jensen hooked up with Addison Bennie would had gotten behind safety Tate Johnson for 57 yards, but the speedy Johnson caught Bennie from behind and stripped the ball as the two fell out of bounds. Fort Madison was given the fumble recovery and took over at their own 8-yard line.

The Bloodhounds would then put together arguably their best drive of the year going 91 yards in 18 plays. They ground the ball with sophomore Teague Smith, McGowan and Landes Williams taking turns pounding the left side of the River Kings 3-man defensive front.

Williams would churn out 24 yards on the ground in the series, while Smith added 34 on seven carries including the TD from one yard out. McGowan added 22 yards on just two carries, one on a bobbled shotgun snap that Williams reigned in and slipped to McGowan on a misdirection. Wellman would add the PAT after Smith's score for 17-7 Hound lead.

Clinton again would show they weren't caving to the Hounds undefeated record and lofty state ranking. The River Kings put together and 12 play, 77 yard drive with most of the offense coming from Jensen. The senior completed five of eight passes in the series for 68 yard and then slipped in around the end to make it 17-14 with just under :30 left in the half.

But Fort Madison would take full advantage of the :30 and send a message going into the locker room.

With the kick being returned by Kane Williams to the 39, Landes Williams would throw incomplete on 1st and 10. Then with 18 seconds left, Tate Johnson blew past the secondary and Williams found him deep for a 48-yard strike to the Clinton 13. On the next play, Williams would reward Johnson for the catch with a 13-yard TD pass in the right corner of the endzone for a 23-14 lead. The PAT was blocked.

Doherty said the Hounds had to make some adjustments at the half, but he was proud of the way they came out.

"Clinton is a big, physical football team and they did some nice things. But I'm very proud of our kids for making those adjustments. We got caught on some things tonight, and our kids fought through that."

Hounds offensive coordinator Justin Menke said a halftime conversation pointed out that the Bloodhounds were controlling the game offensively.

"Really, we got into halftime and said is anything we're doing not working, and everybody to a man just kind of shook their head and it was like OK, we're going to keep doing the same thing and keep leaning. I think in the third quarter that's exactly what we saw," Menke said.

But defensive coordinator Jason Crooks said there were adjustments made to the defensive front and some schemes.

"We just made some mistakes in the first half, but when Tate gave up that pass and then chased the play down, that was huge I think. Just that hustle," Crooks said.

"Then at halftime we did a few schematic things, but reminded them that we've run these coverages for two years and we should be the best at it because it's what we do."

Fort Madison would score on five of it's next six possessions to start the running clock, while the defense clamped down and would allow Clinton just one mid-series first down the rest of the game.

The Hounds would get touchdowns from McGowan on a six-yard sweep, Williams on a 1-yard dive, Johnson on another 5-yard touchdown in the back of the endzone, Kane Williams on a 12-yard screen where he shook off three tackles and dove across the line. The final score was a bubble screen from back up QB Aiden Boyer to senior Miles Dear. It was Dear's first varsity touchdown and he ran 56 yards for it after making the first River King miss and then outrunning everyone to the corner pylon.

Senior Gavin Wiseman led the Hounds in receiving yardage with 77 on four catches. Wellman had 26 yards on three catches and just missed snaring an interception in the first half. Smith finished with 38 yards on the ground for the Hounds.

Austin Ensminger led Fort Madison with six tackles. Mikey DiPrima and Smith each finished with five tackles. Tanner Settles had 4.5 tackles, but that included two for losses and a sack. McGowan and Ike Thacher also recorded one sack each.

The Hounds put their undefeated mark up against an Iowa City Liberty team that beat Mt. Pleasant 56-0 at home Friday night. Liberty gave up 21 points to top-ranked North Scott in the second quarter eight days ago, but held the Lancers scoreless the rest of the game in a 21-0 loss.