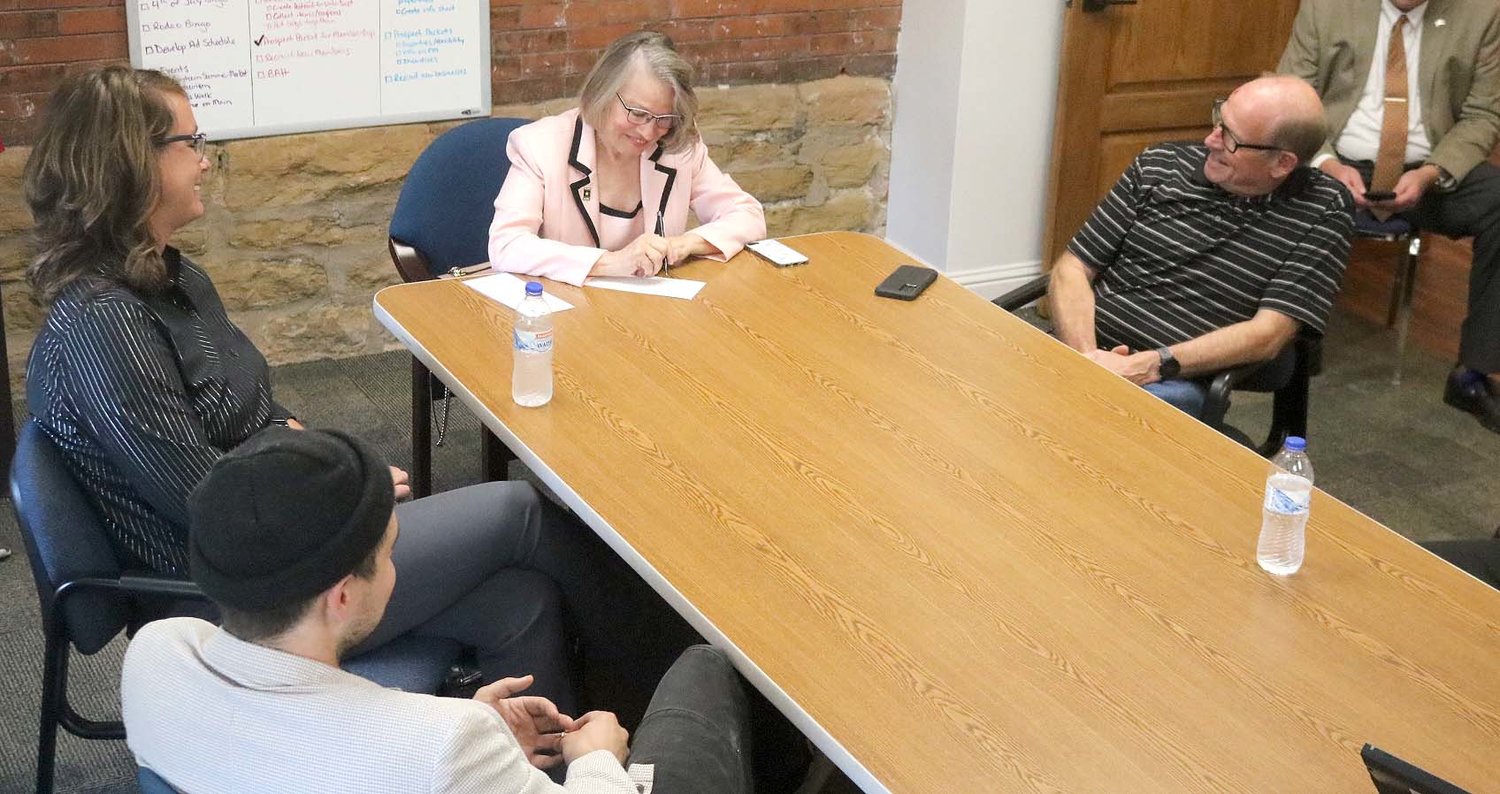 Miller-Meeks filled out about four sheets of paper as she wrote down notes from industrial, economic, education, and political officials in the Fort Madison Chamber of Commerce's meeting room.

"A major industry like ours we feed off the interstate pipeline. We don't go through the utility distribution network," he said.

"I also where another hat with the Lee County Economic Development Board and we were trying to land another major industry next to our facility and at the end they walked away from the deal because of lack of gas."

Allman said the industry was a biodiesel processor that was ready to move to the area, but couldn't work a way to get additional high pressure natural gas to the area.

He said IFC typically uses natural gas with pressure of 700 lbs compared to an average home that uses a half pound of pressure. He said to get that level of natural gas into the area would have cost close to $50 million and the economics couldn't get worked out.

Allman said the biodiesel plant needed the high pressure gas to create hydrogen as a chemical feedstock, similar to what the fertilizer plant does, as a first step in their manufacturing process.

Miller-Meeks said after the meeting that this was the first she heard about the area losing the potential industry due to a natural gas shortfall.

"This is the first time I've heard about industrial level natural gas, but as you know this is not an area of support for the current administration," she said.

"It's a very clean burning fuel source that is plentiful in the United States. We should be exporting it as well as utilizing it. So the difficulty they're having with industrial level natural gas vs. utility level natural gas - that wasn't something that I'd heard about before, so I'll have to do some more research on that."

Tim Fencl, CEO of Danville Telecom, brought up broadband expansion and the Iowa legislature's commitment to $150 million annually for service improvements to rural areas with insufficient service in the state.

Fencl said Iowa Gov. Kim Reynolds has set the bar at 100 mbps upload and download speeds, and said that should be a federal mandate as well. The speed requirements would help make sure the networks being built and expanded are future-proof to allow for growth, while not requiring additional infusions of capital.

He also said legislators need to be aware of "pretenders" that are trying to access state and federal funds with promises of expanded service when in reality some of the firms don't have the manpower to deliver what they are promising.

"Because of the dollars being thrown at this, there are a lot of what I'll call "pretenders" that are throwing their hat in the ring," Fencl said.

Miller-Meeks said broadband is one of her concerns coming from Ottumwa where Internet service was patchy and at times she couldn't send an email or print off an article. She said she understands the dynamic of a county being shown on mapping that Internet was being served, when in reality maybe only one location was being served.

Another topic of discussion was creating workforce and the proposed Joint Education Center currently being negotiated between officials at area schools, industries, and the Lee County Economic Development Group.

Miller-Meeks said one of the projects she's submitted for federal funding places counselors in high schools to help students look at the benefits of trade careers.

"The problem government has had is that we try to top-down a solution. Unless we talk to a business or employer we don't know what it is you need and what skills your lacking. And too often we don't listen. And I'm going to put myself in that camp even though I've only been there a short time," she said.

Miller-Meeks said another problem is that we don't know what the next big industry is.

"Where there's a will there's a way. Necessity is the mother of invention. When someone has an idea they propel it" she said. "We in government often don't have those ideas."

She also said she's passed a Vet Tech bill where veterans can go in and learn technology to help create additional workforce. She said in one month, the federal government spent $45 million on enrollment and applications and the result was 2,000 veterans employed in jobs with an average salary of $62,000 per year.

Fort Madison Mayor Matt Mohrfeld thanked Miller-Meeks for her assistance in getting the Fort Madison Marina project in front of Congressional appropriations committees.

The Congresswoman said she doesn't know where the project is as far as funding or making the cut for programs, but each Congressional district was allowed to submit 10 projects and the Marina project was a top priority for Miller-Meeks in the 2nd district.