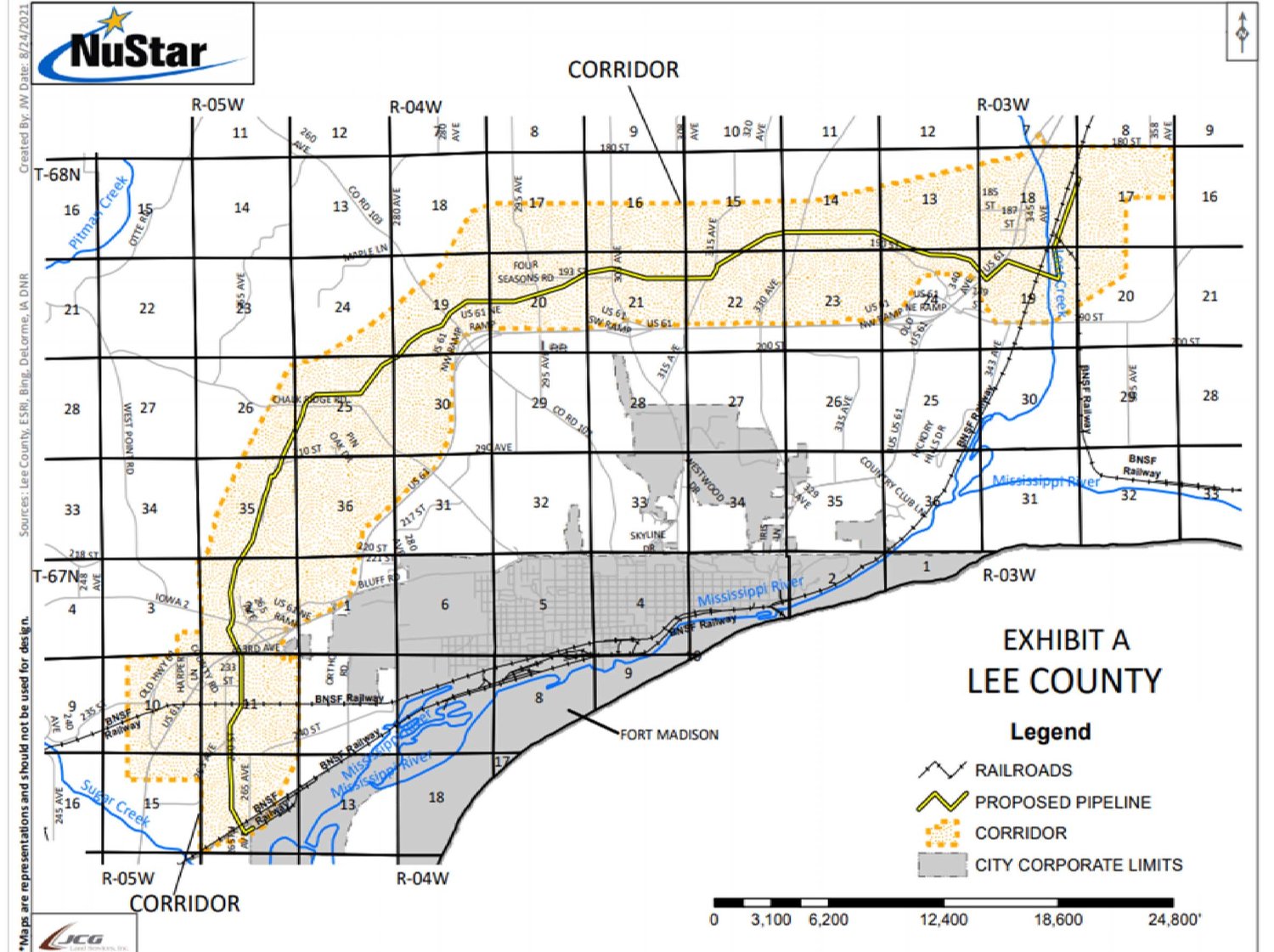 A new 6-inch anhydrous ammonia pipeline is being proposed in Lee County north and west of the Hwy. 61 bypass. An informational meeting is being planned for Oct. 5 in West Point. Image courtesy of Lee County.
Posted Wednesday, September 8, 2021 1:38 pm

LEE COUNTY - A Texas company is looking to build a 14-mile pipeline in Lee County to allow the Iowa Fertilizer Co. access to a larger anhydrous ammonia network.

Lee County Supervisors were informed last week of a public information meeting that is set to take place at Small Grand Things, in West Point on Tuesday Oct. 5, at 6 p.m.

The pipeline would be built in a corridor north of the Hwy. 61 bypass and would run west through the county and then south from about Chalk Ridge Road west of Fort Madison to the BNSF railroad tracks near the Mississippi River.

Lee County Engineer Ben Hull said the pipeline would be a 6-inch pipeline that would loop around Fort Madison coming out of the fertilizer plant. According to information provided to the board, the pipeline will have a maximum allowable operating pressure of 1,480 pounds per square inch.

He said he's had conversations with NuStar Pipeline Operating Partnership L.P. out of San Antonia, Texas about permitting. Hull said conversations such as that are normal in county operations, but said most of the time they don't come to fruition.

"I understand we were copied on a packet that was sent out to affected land owners, so it would seem to me that pending authorization from the Iowa Utility Board, this pipeline (company) may be going down the road to acquire easements for their pipeline," Hull said.

Hull said he also received a inquiry from NuStar as to who the county would be using as their inspector on the project.

The county hired Chippewa Resources when Dakota Access built their pipeline through Lee County to serve as the county's inspector during the construction process to make sure landowners were taken care of as the installation progressed and finalized.

"As you may recall from the Dakota Access pipeline that the board of supervisors has a responsibility to inspect the pipeline construction from the perspective of the private landowners. Not the construction of the pipeline itself but make sure that the ground is restored the way it should be," Hull said.

Hull said the county's secondary roads funds are not to be spent on private property, so he said it would make sense to hire a consultant that reports directly to the county if this project moves forward as well.

"My believe is this is a relatively certain project," Hull said.

Supervisor Ron Fedler said he spoke with Hull before the meeting and said he was satisfied with Chippewa's performance and would recommend the county do something like that again to protect landowners.

The county's cost for hiring resources was reimbursed to them by firms associated with the pipeline construction.

"They have to get right of ways from landowners and they usually are compensated for that. They still own the property, the pipeline would just have access to it," Fedler said.

The county also got an agreement exhibit outlining compensation for crop loss and other property damages.

A representative of the Iowa Utilities Board will be at the public information meeting.

Following the meeting representatives with JCG Land Services, Inc. will begin contacting county land owners of property where easements would need to be secured.

From 30 days to two years after the Oct. 5 meeting, NuStar may file a petition for a pipeline permit with the IUB for permission to build the pipeline, and if necessary, will request the right of eminent domain, or condemnation.