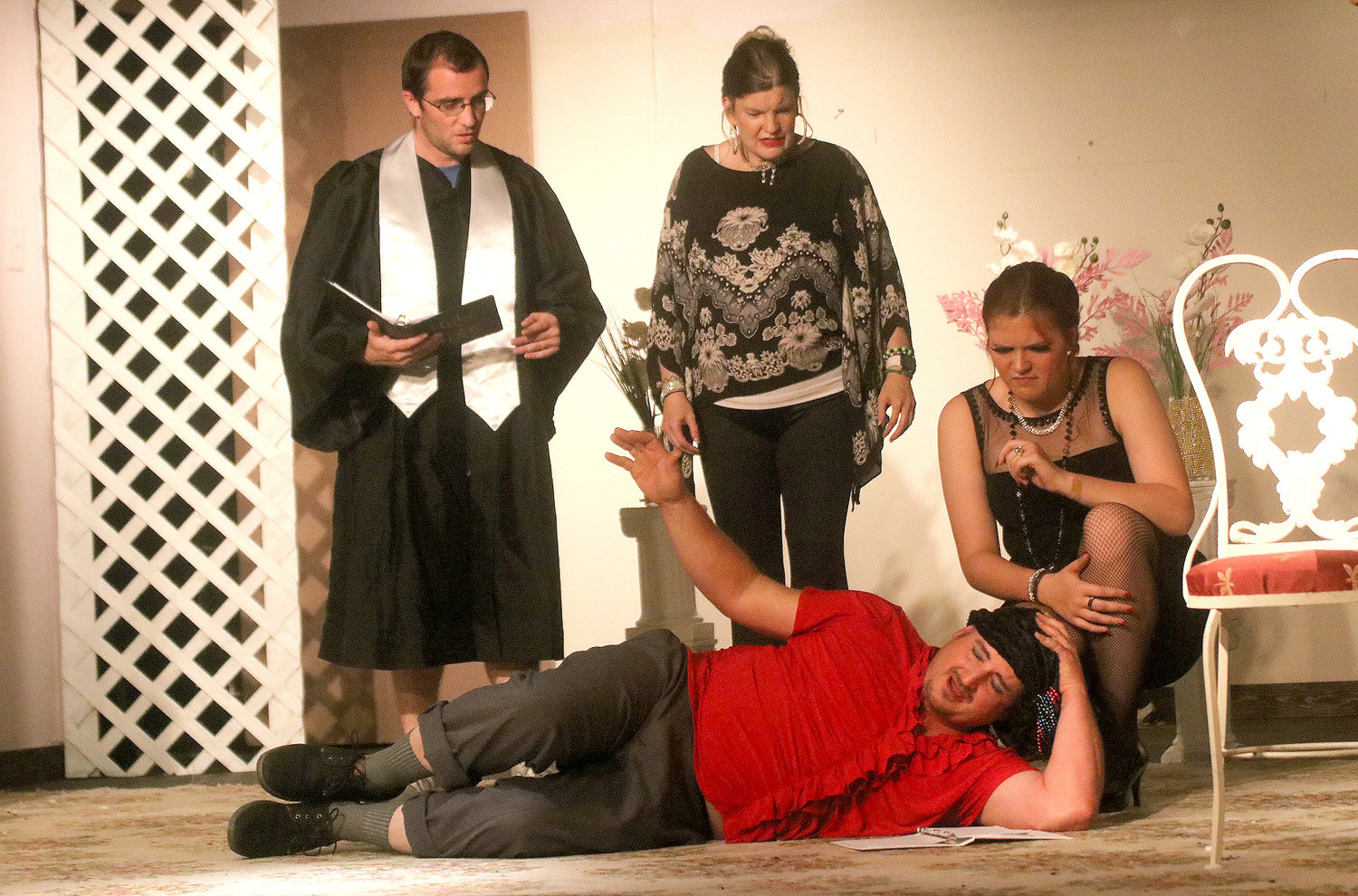 Ty Clute playing "Raul" holds on after a dastardly deed at a wedding rehearsal in OFP's 'As Long As We Both Shall Live" playing at the Fort Madison playhouse starting this weekend. Photo by Chuck Vandenberg/PCC
Posted Tuesday, October 5, 2021 6:30 am

Farcical whodunnit takes the stage this weekend in downtown FM

FORT MADISON - If you haven't been to the Old Fort Players since they hit 40 years plus one this year, this should be the show you go to.

The theater couldn't celebrate 40 years last year due to the pandemic lockdown, so they are celebrating their 41st anniversary this year with shows in the fall, winter and spring.

But this month's folly is a funny whodunnit with the backdrop of a couple who falls in love at a chance meeting over a car repair.

The storyline jumps to the couple's wedding where a lush mother-in-law has it in for the bride-to-be, a southern belle who scores a perfect SAT and is a the wrong target for a scam.

Sydney Amberger plays Addison Ashe in the six scene, two act farse. Ashe dotes on the groom after she helps him get his car running after a minor break down. The smitten couple then have to deal with a Richar Abel's Mrs. Wilcox, the matriarch nipper who will do anything to protect her son, and more importantly the family fortune.

But things get out of sorts when a wedding planner, played by OFP veteran board member, construction man and performer Ty Clute shows up. Clute plays a quadruple threat and lets his comfort on the stage come through in multiple rolls with ease.

If body language speaks to anything, this guy brings physical comedy to the role(s) and relates well with the audience.

Sterling Barnes is becoming a regular on the stage at the playhouse in downtown Fort Madison. He's getting more and more comfortable with roles and plays Addison's husband-to-be James "Jamie" Wilcox. Wilcox is just short of the trustworthy husband, following in the family business in more ways the one.

Michael Reed Randolph wraps up the cast as a "dark" Rev. Mountain character that moves the cast through the warmup and eventual wedding ceremony. Randolph tries to keep the wedding rehearsal moving along, but some champagne and dancing find an unhappy and unceremonious ending, as the script goes from celebration to investigation with laughs and one-liners almost as criminal as the storyline itself.

The play was written by Sean Grennan and is produced by special arrangement with Playscripts, Inc.

The Legacy Theater to host Beatles vs. Stones play-off
CARTHAGE - The next show at The Legacy Theater in Carthage is Beatles vs. Stones at 7 p.m. on Saturday, Oct. 8. The show features two of the greatest rock 'n' roll bands of all time in a musical …
© Copyright 2022 Pen City Current | Copyright/Terms of Use
Powered by Creative Circle Media Solutions