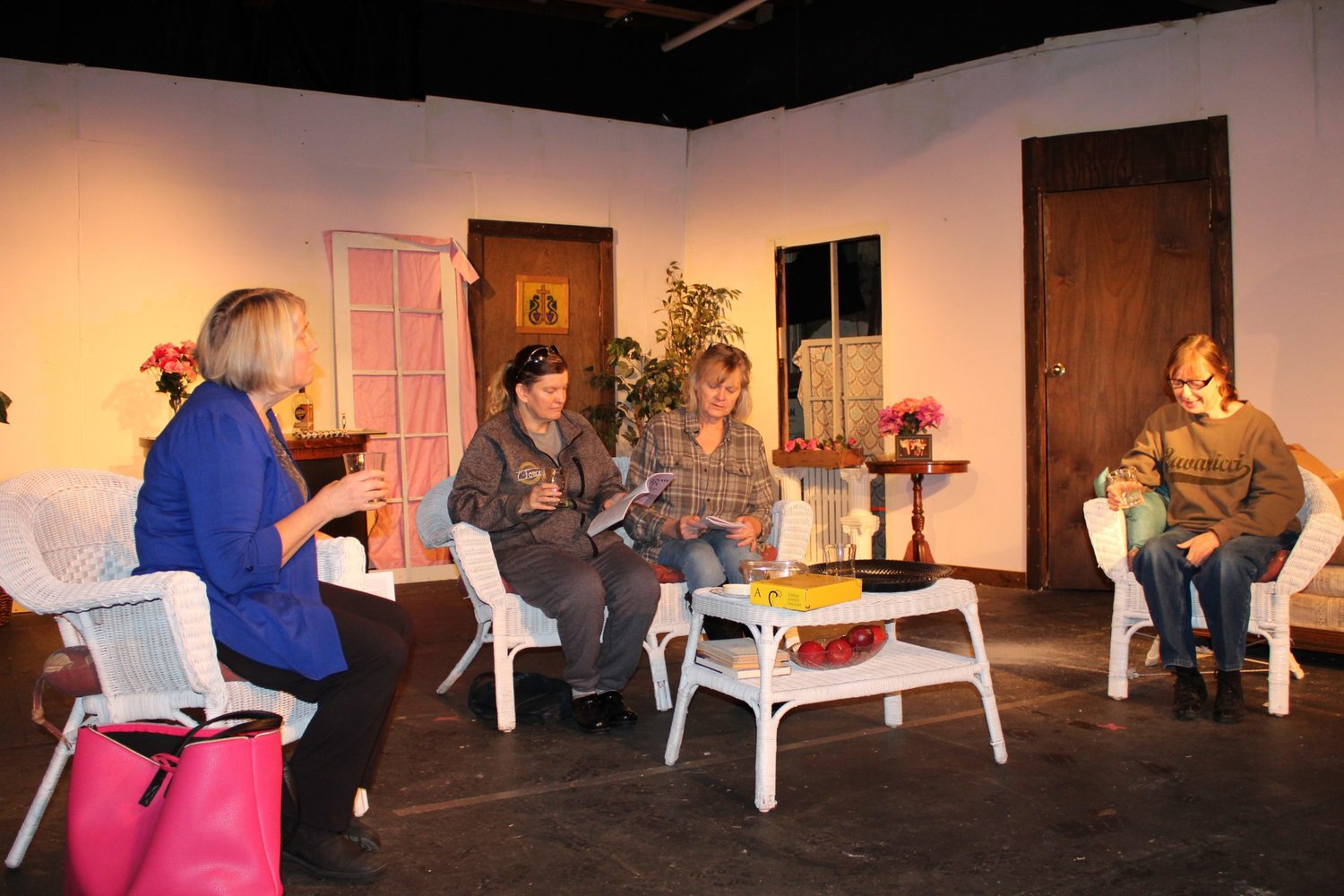 FORT MADISON - In the delightful, laugh-a-minute comedy, “The Savannah Sipping Society,” four unique Southern women, all needing to escape the sameness of their day-to-day routines, are drawn together by Fate—and an impromptu happy hour—and decide it’s high time to reclaim the enthusiasm for life they’ve lost.

Earthy and boisterous Marlafaye, a good ol’ Texas gal, has blasted into Savannah in the wake of losing her tom-cattin’ husband to a twenty-three-year-old dental hygienist. The strength of her desire to establish a new life is equaled only by her desire to wreak a righteous revenge on her ex. The brash and feisty Marlafaye Mosley will be portrayed by veteran actor, Karen Schumaker. Karen is an OFP favorite, recognizable from her roles in “Harvey,” “Drinking Habits,” and several Opal plays.

Also new to Savannah is Jinx, a spunky ball of fire. She offers her services as a much-needed life coach for these women. However, blinded by her determination and efforts to get their lives on track, she overlooks the fact that she’s the one most in need of advice. Never one to rest, Richar Abel tackles the role of Jinx Jenkins, the always helpful party crasher. Richar recently appeared in “The Queen of Bingo” and “Leaving Iowa,” is Vice President of the Board of Directors and in charge of the Youth Summer Theater Program.

Randa, a perfectionist and workaholic, is struggling to cope with a surprise career derailment that, unfortunately, reveals that she has no life and no idea how to get one. Suzanne Overberg skillfully uses her comedic acting experience to bring the bold and sassy Randa Covington to life. Suzanne previously appeared in OFP productions of “The Dixie Swim Club” and “You Can’t Get There From Here.”

Last on the Sipping Society’s membership list, but not least, is Dot. She is still reeling from her husband’s recent demise and the loss of their plans for an idyllic retirement and faces the unsettling prospect of starting a new life from scratch—all alone. After being away from the stage for several years, Cheryl Hardin is ready for a comeback as the quiet and endearing Dot Haigler. Cheryl previously acted in “Ten Little Indians” for OFP.

“Cheryl showed up to the third rehearsal with all of Act I memorized! And then had Act II memorized shortly after that. It really set the tone for the production. What a great group of women they all are to work with! There are a lot of costume changes and props to deal with. Suzanne Overberg has been absolutely essential when it comes to dressing the set. There’s very little on stage that didn’t come from her house or garage,” Director Dorothy Schulte said. “I’m also thrilled to be directing two veteran actors, Richar Abel and Karen Schumaker. I’ve been onstage with them before, but this is my first time directing them. It’s great to have their input and expertise. They give it 100% in every rehearsal and are so much fun to watch.” This is Schulte’s first directing gig since 2015’s “Barefoot In The Park.”

Stage managing the production is devoted volunteer, Kim Albers. Kim left behind her usual job behind the concessions counter to take the stage in 2021’s “Leaving Iowa” and “It’s A Wonderful Life: A LIVE Radio Play” and now steps behind the curtain to supervise the many quick costume changes and prop placements for the cast.

Handling the sound and lights is Matt Abel. Matt recently appeared in “Leaving Iowa” and “It’s A Wonderful Life.” Ty Clute has provided the set, a very convincing depiction of a vine covered verandah in downtown Savannah. Also playing a small but vital part in the show is Rita Schneider. This will be her first appearance on stage and it’s guaranteed to be drop-dead funny!

Over the course of six months, filled with laughter, hilarious misadventures, and the occasional liquid refreshment, these middle-aged women successfully bond and find the confidence to jumpstart their new lives. Together, they discover lasting friendships and a renewed determination to live in the moment—and most importantly, realize it’s never too late to make new old friends. So, raise your glass to these strong Southern women and their fierce embrace of life and say “Cheers!” to this joyful and surprisingly touching comedy!

“The Savannah Sipping Society,” a Jones, Hope, Wooten comedy, is Produced by Special Arrangement with Dramatists Play Service, Inc. and runs February 4-6 & 11-13, 2022. Evening shows begin at 7:30 and Sundays at 2:00 pm.Tickets are available online at www.oldfortplayers.com or www.purplepass.com/ofpfeb2022 and at the door. Adult: $15, Senior/Military/Vet: $12, Student (Age 5-17): $10. Masks are recommended. We will provide socially distanced seating, so capacity is limited. Make your reservations or purchase your tickets now!

Leading sponsors for the season are Jim Baier Ford and Lee County Bank. Our partners include the Fort Madison Daily Democrat and Scotts. Additional funds have been provided by Connections Bank.

Last season would have been Old Fort Players’ 40th anniversary but the celebration was postponed due to Covid. So, this is the “40+1 Anniversary Season.” The theater is located in downtown Fort Madison at 725 Avenue G. Send a Facebook message, send an email to oldfortplayersfm@gmail.com or call 319-372-9559 for more information. Like them on Facebook (Fb@oldfortplayers) to keep up with everything that’s going on at the theater.