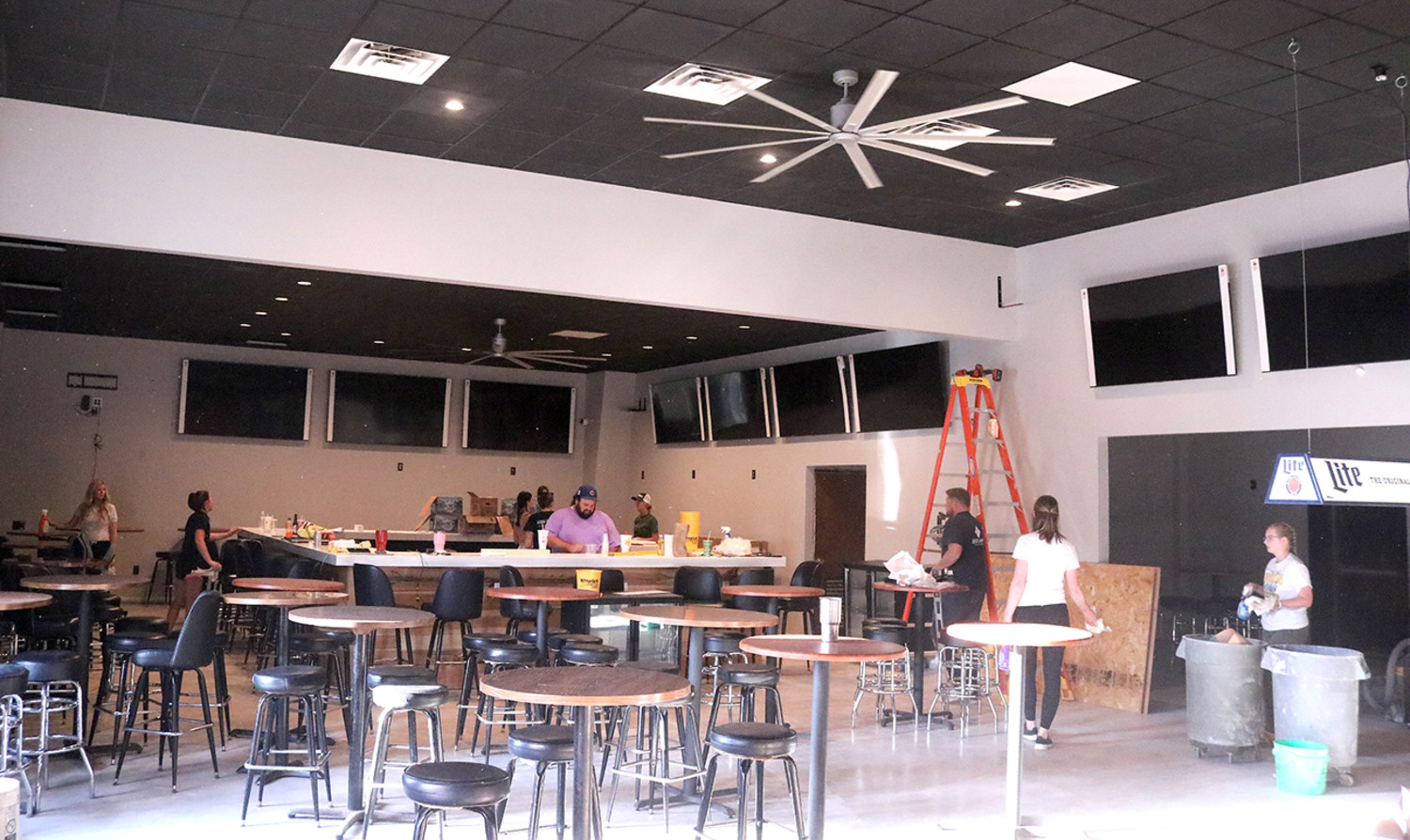 New ownership partner Brock Umthun sits at the newly constructed bar at the Rail Yard on Monday. Crews were on hand working to get the renovated bar ready to re-open on Friday, July 1 with a special event planned that day. Photo by Chuck Vandenberg/PCC
Posted Monday, June 27, 2022 9:48 pm
Chuck Vandenberg

FORT MADISON - This won't be the folksy thing you're used to with the Old E, or Kinnick South, but you can plan on the same fun environment when the joint opens up again this Friday.

Bobby Holtkamp, Scott Meller, and Brock Umthun are bringing a fresh new look to the business that includes a more open floor plan and a sports bar feel with about 14 big screen televisions at 72 and 81 inches lining the walls.

Holtkamp said about a year ago, former owners including Shane Carter, approached Umthun, who had joked around with his friend about buying the place.

"Brock reached out to me and we got together and looked at everything Shane shared with us and it all made sense," Holtkamp said.

The two then thought it would be a good option to add a third partner in the ownership.

The group purchased the bar last fall and kept operations in place until Memorial Day when they closed the place and local contractor Pat Scott and the ownership group went to work on resetting the bar with a new vision.

They had previously closed off the area where the bands usually play on the north side of the bar and did some preliminary work on the building in May and built the new bar and did some construction. But since the end of May, they closed the rest down and are now just four days away from a Friday reopening.

"We didn't know how soon we were going to do it. We wanted to make sure we could make some money first. Turns out things were going well and we decided to pull the trigger," Holtkamp said.

Meller said he had to sell the idea to his wife, so the three couples went out for dinner and talked about the business model and future visions for the location.

"We knew we wanted to move the bar. We didn't know how, but we knew it had to be moved. We had some good ideas and taped it out on the floor and looked at it and went back forth on it," Meller said.

"Then we went to Nashville on a rodeo trip and noticed all the bars had an island set up. This one was too, but it wasn't workable and we came back and said, 'We gotta do something like that. Your line of sight is better and you can converse with anyone at the bar."

Now the bar is set up on the north side in a square that seats about 30 people in an open floor plan.

"This building's been around since 1900 at least. We got a picture from 1905 that's a panoramic and it shows one Model T Ford and then horse and buggies were pulled up to the businesses that used to be in this building."

Meller said the building was originally used by the railroad to observe track activity. Which is part of the reason for the new name. Umthun's family were railroad workers, as well. So Rail Yard seemed to stick.

Pool tables will be moved back in before Friday because the Rail Yard will still sponsor about four pool teams. Other table games will also be available.

Umthun said it's a full business venture despite the fact that the three made the Old E and Kinnick South a regular stopping point.

He said he regularly flirted with the previous owners about selling the bar.

"WelI, guess it all kinda started with me and Bobby joking with them about selling the place. And they finally approached us, I guess it was last summer," Umthun said.

"I knew he would be on board and then we had to talk Scott's wife into it. She saw the numbers and it made sense so here we are."

He said the group immediately began kicking around ideas on what the space could be and the sports bar theme.

"I always kinda had ideas. I never understood that wall there behind the bar. I just wanted it to be one big space like it is now," Umthun said.

Holtkamp and Meller both work and run family businesses, but Umthun works for Mohrfeld Solar and hasn't owned his own business before.

"Working with these guys, they know what to do and handle the books. They know that stuff, I'm just the bystander. A third of it's mine, but Bobby handles the books. I always thought it was a cool idea to own a bar with your buddies. We always kind of hung out here, but now it's a business at the end of the day," he said.

"And you can't be your best customer in the bar business."

The group hired Katie Sylvester to be the bar manager because they wanted to have that presence and bring some customer service experience to the business. Sylvester is known in the community as a stylist at Stag in downtown Fort Madison.

Holtkamp said the majority of the renovations will be completed by this week and a re-opening celebration is in the works for Friday with specials and Coal Haus pizza will be on site prepping pizza for patrons.

There won't be an active kitchen on site for food service, however Holtkamp said there will be a convection oven for bar-type food and snacks.

Bands will also be a regular part of the business and they will now play on what was originally the stage on the elevated platform on the south end.

Hours will be from 1 p.m. to 11 p.m. Tuesday and Wednesday. Thursday-Saturday will be 1 p.m. to 2 a.m. and Sunday noon to 11 p.m. Special hours will be scheduled for early Iowa football games and those kind of things.