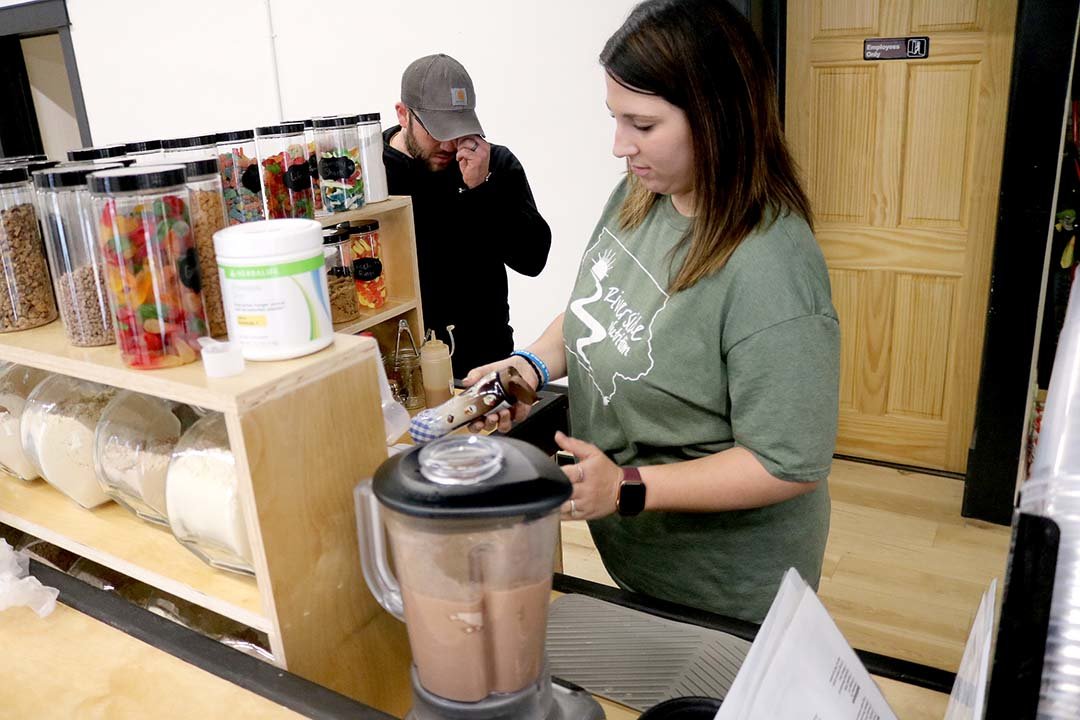 Shawna Hamilton prepares a protein shake at Riverside Nutrition in downtown Fort Madison. Hamilton opened the business with her husband and is seeing customer traffic above what she had anticipated opening the nutrition club. Photo by Chuck Vandenberg/PCC
Posted Tuesday, June 8, 2021 1:35 pm

FORT MADISON - Herbalife, a dietary supplement popular in the 80 and 90s is making a resurgence in nutrition clubs like Fort Madison's Riverside Nutrition.

The new protein-based drink bar in the former Hope Real Estate building on the southwest corner of 9th Street and Avenue G, is mixing in well with the downtown business culture.

Owners Shawna and Matt Hamilton opened the business on May 10 and have since seen a remarkable uptick in business that has them considering resetting store hours.

Shawna said Saturday hours may need to be adjusted because of the heavy business traffic around 1 p.m.

The nutrition club features protein shakes, protein-based iced coffees and boosted teas. Most products are sugar free with the exception of some toppings on the drinks but those can be left off upon request.

Caffeine free drinks are offered and kids drinks that substitute aloe for the caffeine are also available.

Shawna said the club has been very busy.

"We're pretty much steady all the time usually. We have a little downtime from 9:30 to 10:30 a.m. and that's when we restock, then the lunch rush hits. People just come in on lunch breaks to get through the afternoon," she said.

"I honestly feel like it's been busier than I expected. I expected us to do well, but the amount of regulars we see coming back every day to get something makes me very happy."

Customer feedback has shown the flavor is a surprise to people.

"Most of them are telling us they are surprised how good everything tastes," she said. "When we say things are sugar-free, people tend to think of that funky aftertaste of being sugar-free, but on the protein shake side of things, people say they taste like milk shakes and not the typical protein shake."

The couple looked at several buildings in town including some on Avenue G, but decided to go with a rental instead. They currently rent from Wes and Jennifer Holtkamp.

The two also own and operate Learning Tree Day Care Center and have four children so buying a building seemed like a lot to take on with both operations, and Matt working full-time at Silgan in Burlington.

Matt and a friend custom built Riverside Nutrition's service bar as the building was being redone inside.

"We came in when they had everything tore out. We know what it looked like when it was a real estate office as we signed for our first house here. So there's been a lot of improvements," Shawna said.

The service bar was custom built by her husband and a friend.

Matt said he was skeptical of the venture at first but has been pleasantly surprised with the reception from customers.

Other nutrition clubs are open in Burlington, Carthage, Quincy, Galesburg and Macomb. Shawna said she reached out to the owner of the Macomb club who has helped her with inventory and has answered questions about getting started.

"She's helped make this very easy and answered all the questions I've had."

The basis of the products is Herbalife, a nutrient supplement direct sales company that had its heyday in the late 80 and 90s. Hamilton said the company made a bold shift to allowing distributors to operate clubs.

She said new product lines like protein bites, pudding pies and waffles and donuts could be available soon.

"We have recipes for donuts and waffles where even the icing is made with protein mix," she said.

With Business 61 being torn up a block south of the club, Hamilton said traffic by the front door has increased and that's been good timing for brand awareness.

The Hamiltons are also trying to come up with something for downtown parades including the Rodeo Parade in September. Shawna said she may do some pre-made mixes so drinks can be made quickly with ice and water and keep customers moving.

She is also considering offering a "flight" with small samples of drinks to allow customers a chance to try different flavors to find a favorite.