Freshman medals with a 19:23.08 on her first attempt at Kennedy Park 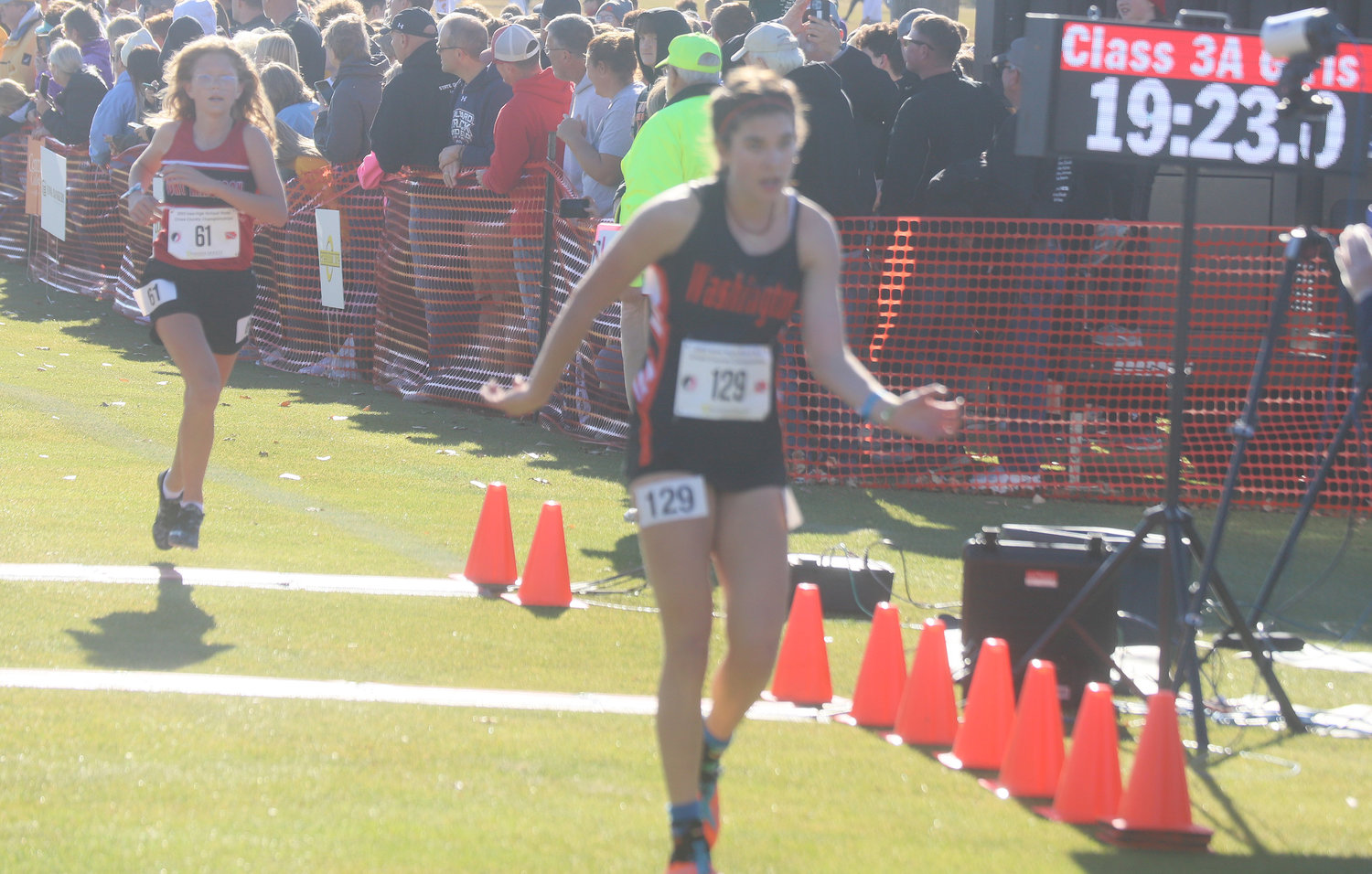 Fort Madison's Avery Rump crosses the finish line at the Class 3A Girls Cross Country state meet Saturday in Fort Dodge right behind rival Iris Dahl from Washington. The two, both freshman, have been battling each other all year.
Photo by Chuck Vandenberg/PCC 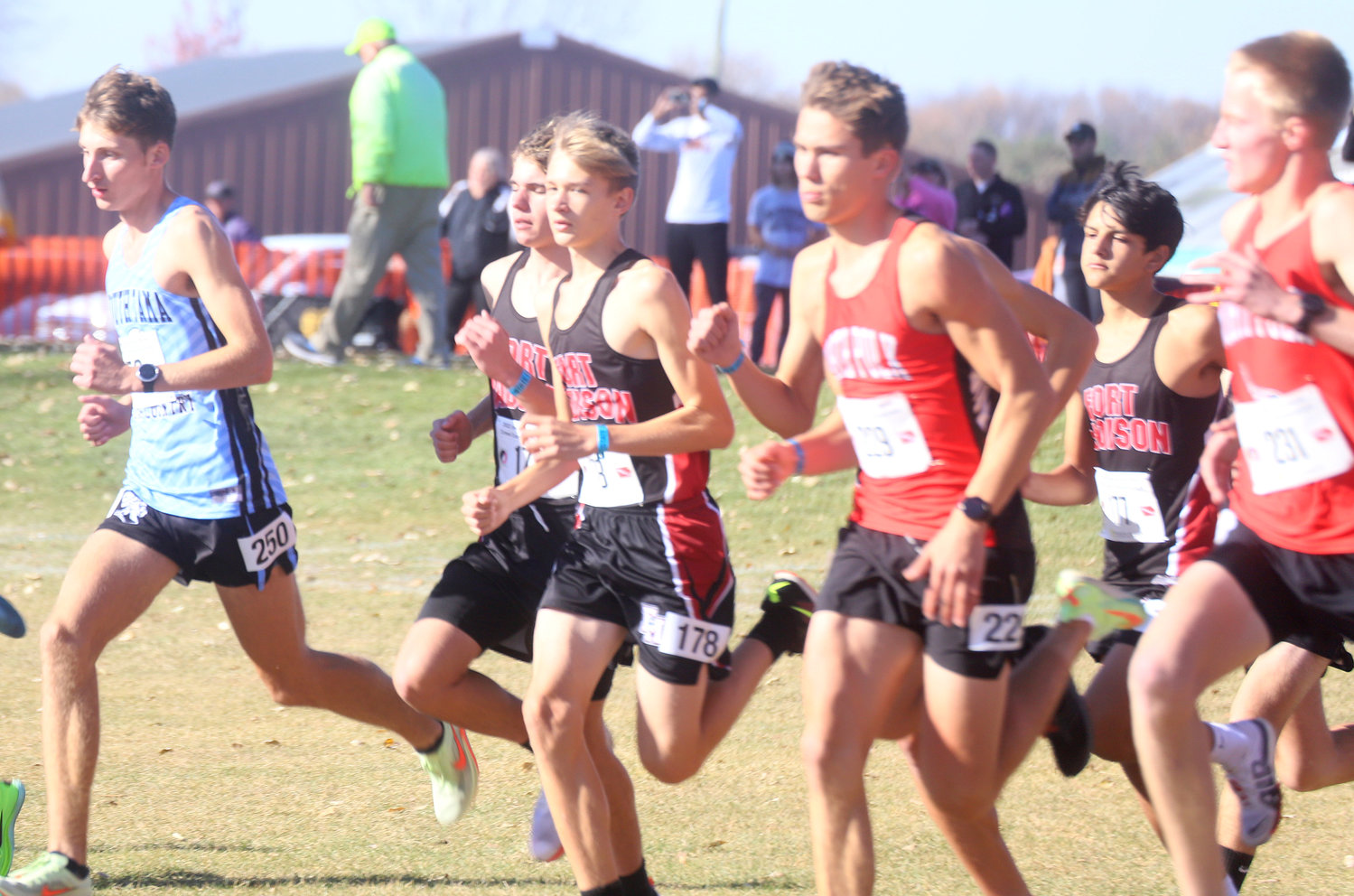 The Fort Madison boys cross country team comes out of the starting grid Saturday in Fort Dodge. Jacob Shottenkirk led the Hounds with a 59th-place finish in Class 3A boys.
Photo by Chuck Vandenberg/PCC 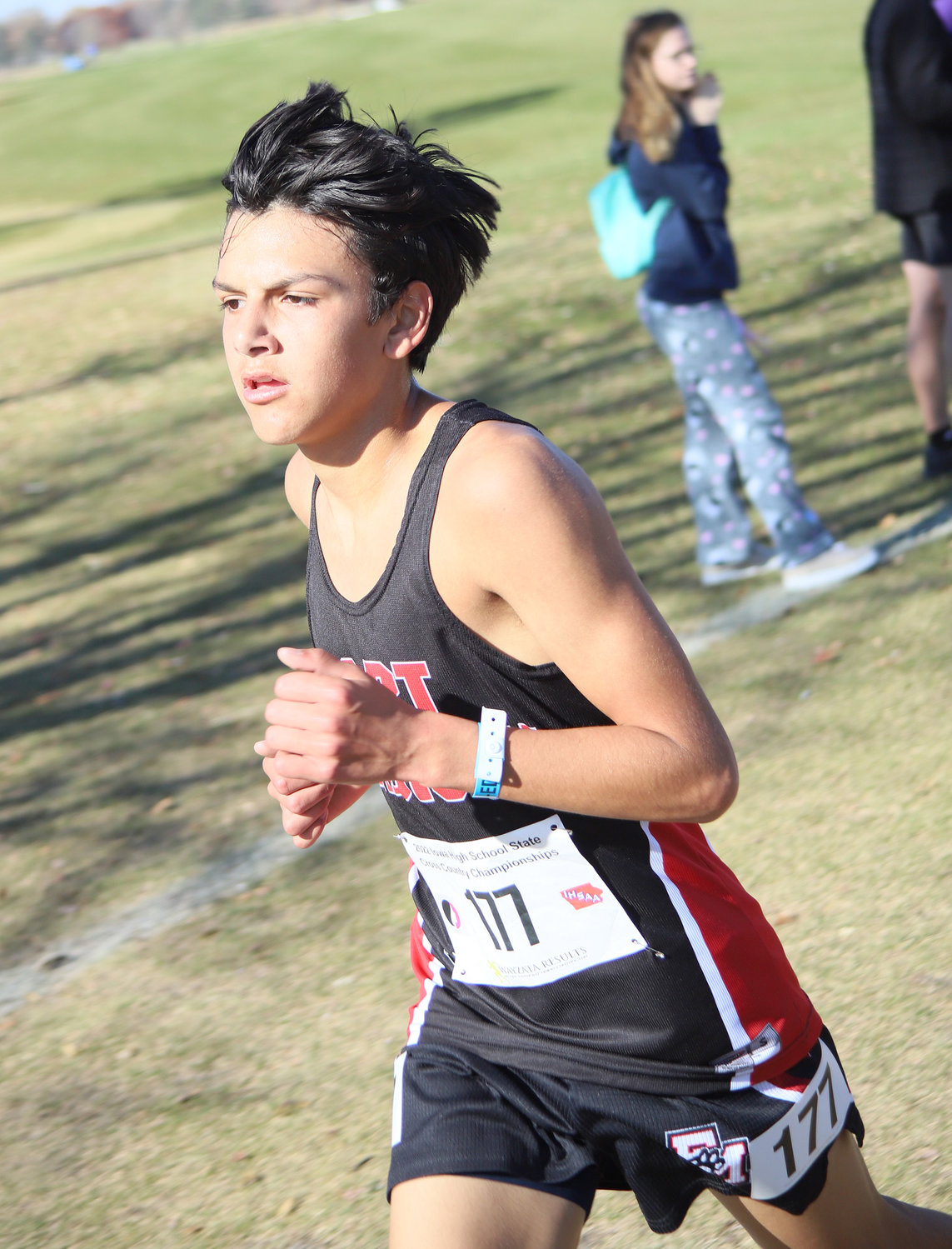 Sophomore Jacob Shottenkirk passes by with about a half mile left in Saturday's 5K at the state cross country meet in Fort Dodge. Shottenkirk was the top finisher for the boys team.
Photo by Chuck Vandenberg/PCC 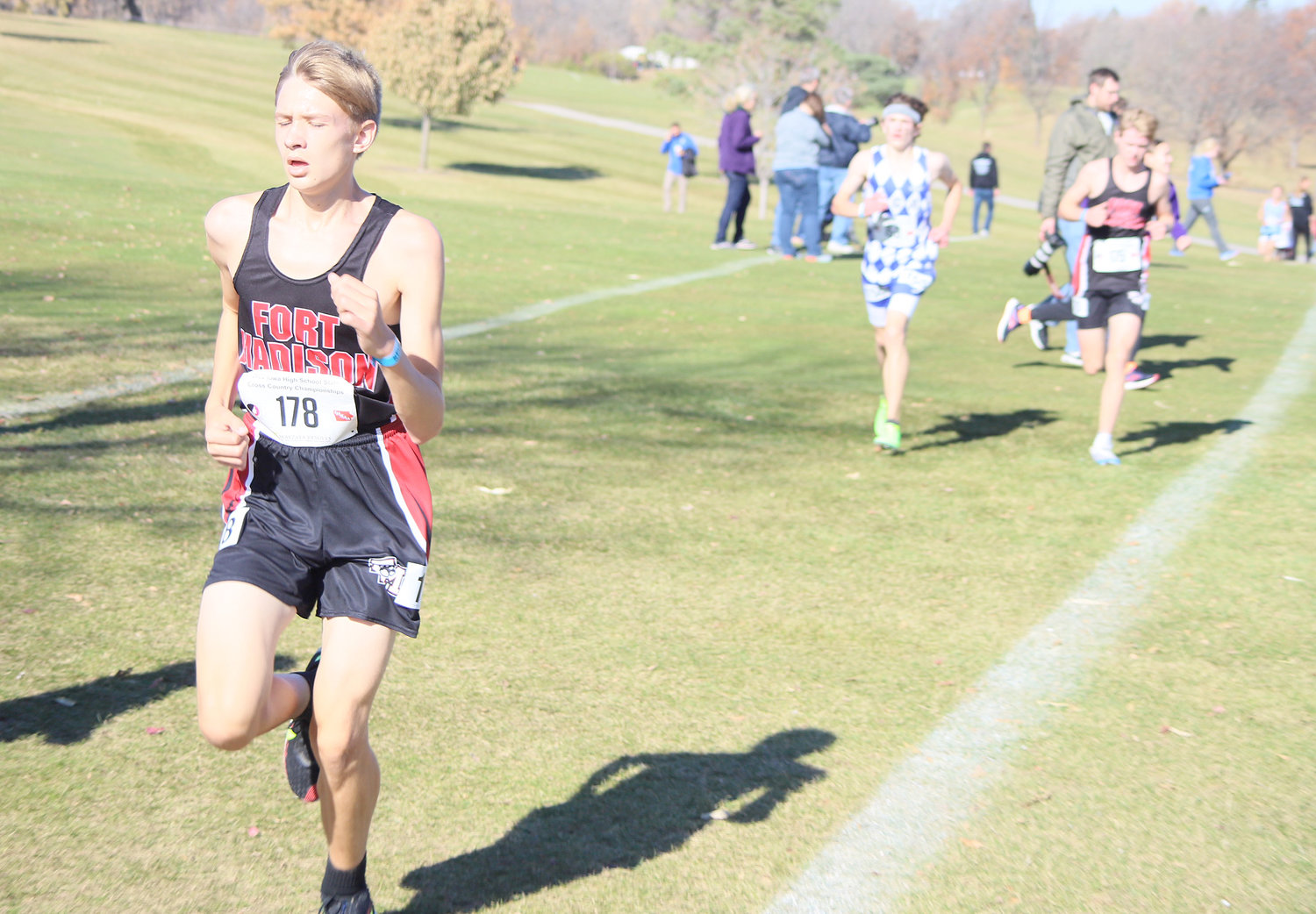 Riley Tripp moves past the final intersection at Kennedy Park in Fort Dodge leaving about 1/2 mile before the finish line. The Hounds finished 15th at the meet with 357 points.
Photo by Chuck Vandenberg/PCC 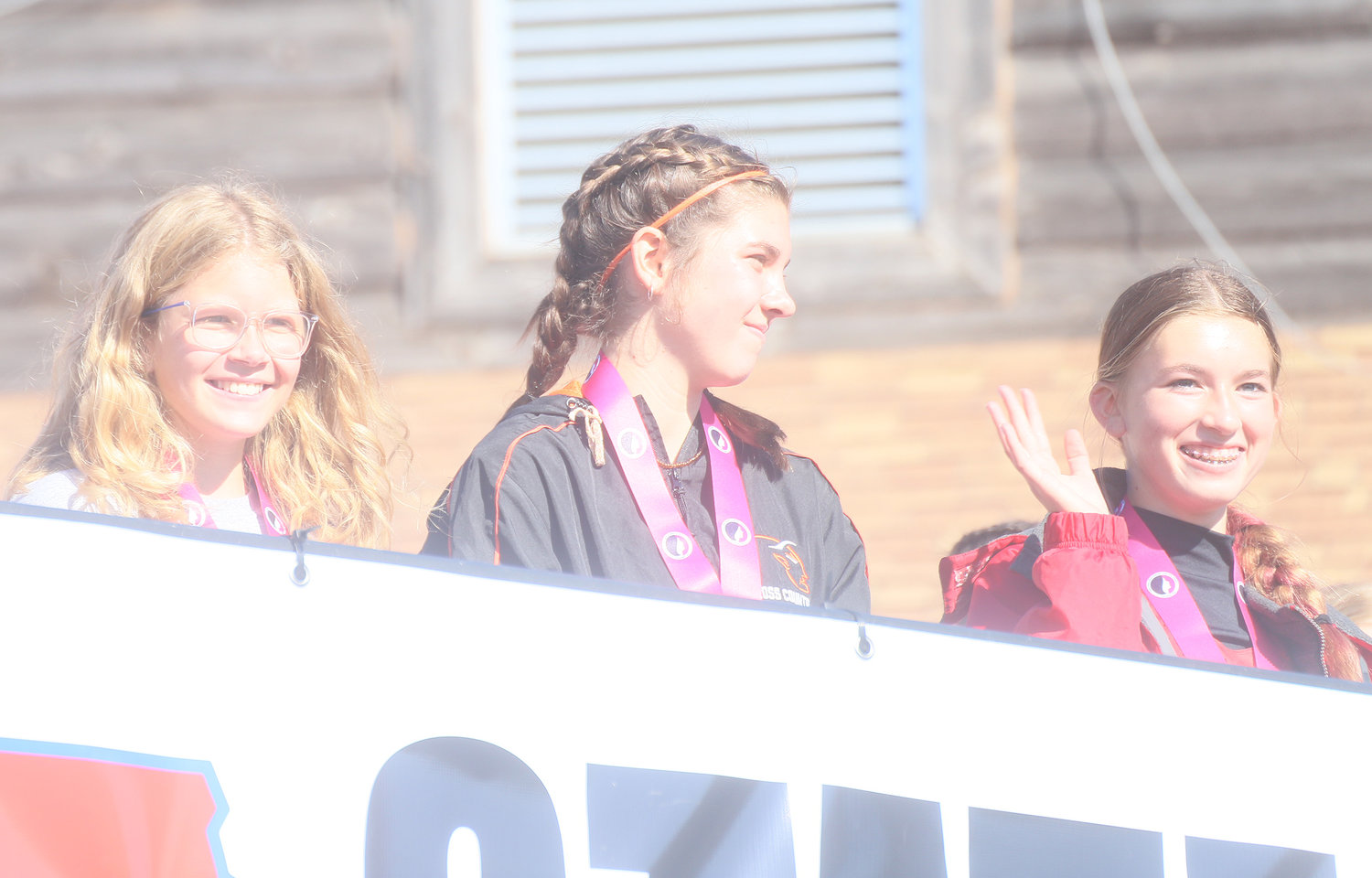 That was actually a lot better than I expected it to be. It was one of my favorite races. And it was great weather  - I just loved it”
Avery Rump, FMHS freshman runner

Guzman learns on the run

But now she does.

After having the eighth fastest time in the event at John F. Kennedy Park, her plan is to come back.

Rump, got out of the starting grid well and after the first 100 yards down the opening funnel, she had already positioned herself in the top 10, a spot she would hold the rest of the way around.

But one thing she didn't get done was catch Washington's Iris Dahl. The two had been battling in a friendly rivalry all year.

Ballard's Paityn Noe set a new state record as the first girl to ever break 17 minutes with her 16:48.58.

Avery said the state meet and the course are now one of her favorites. The 64-degree sunny weather didn't hurt things, either.

"That was actually a lot better than I expected it to be. It was one of my favorite races. And it was great weather  - I just loved it."

She said her thoughts during the run were simple.

"Iris is beating me," she said.

"I tried my best to not let her beat me, but she did. I'm glad it was my friend and not just some random person. I'm so happy for her, she's such a great person."

Addison had been battling shin splints the last few weeks of the season and said she had to deal with that again Saturday finishing 99th.

Although the finish wasn't where she hoped, Addison said competing Saturday was her goal and she accomplished that. And after the run, it was high fives and cheers with her sister, and fist bumps and hugs with the other runners.

"It was more for fun the first year. Next year I'll train with this in mind because I know what I'm getting myself into and I can be more prepared," Addison said.,

She said her mindset was just to try and work the uphills to her advantage, and then just pass girls when she could.

"It was mostly to have fun because when they all got way out there I was like ehhhhhhh, nah, that's probably not going to be me today."

"We knew it was possible, but you gotta run the race. She gets a little nervous before the race, but once the gun goes off - it's on." Mendez said.

"That Iris/Avery rivalry isn't going away anytime soon. I love it. We have good rapport with Washington coaches and we're happy for each other."

Sophomore Jacob Shottenkirk had the best showing for the Bloodhound boys. Shottenkirk finished 59th inividually and 45th in the team scoring at 17:25.37.

"I think I ran the way I wanted to., That was perfect for me. The course was fun, it was just really fast," he said.

"That's the longest start we've had. It was weird but it was a cool run."

He said with two years to qualify he wants to come back and knows what he has to do to place higher.

Two freshman were next across for the Bloodhounds. Nolan Guzman crossed at 17:50.02. His time was 88th best overall and 67th in the team competition.

"It's good to be here," he said. "You learn a lot here. You learn you gotta get out hard. If you wanna be up there, you gotta go.

"You just learn as you're running, how you're feeling. For me it's all mental and keeping strong."

Cotrell suffered a strained Achilles tendon during workouts this week and had to step aside.

The Bloodhounds were seeded 15th and started in the 20th grid, and finished 15th in the team scoring with 375 points.

Each one of the Bloodhound runners made up ground in the final mile with both Shottenkirk and Guzman passing 10 runners in the final 1/3 of the course.